For all the interesting and unique entries that the Transformers line has given us the past 20 years, the line seemed plagued by one strange limitation: the lack of Non-Transformer toys. It may seem strange, but Hasbro has traditionally shyed away from releasing toys under the Transformer name that don't Transform. Maybe it has something to do with the poor reaction to the Action Master figures. Nevertheless, this limitation meant that you wouldn't have a Spike action figure or a Role playing Matrix. Such things that would have been no-brainers in other lines were a struggle in Transformers. But things seem to be changing. Both Kicker and Alpha Q will have action figures later, and begginning with the Armada line we have the inclusion of Role Playing weapons, where we can take the role of either Optimus Prime or Megatron.

Ofcourse, Armada's first stab at it was the release of the Star Saber/Dark Saber, which, needless to say, didn't sell that well. Maybe it was because they didnt' look like swords, or that compared to other toy swords on the market, (Like Star War's Lightsabers and the Lord of the Rings swords,) the Star Sabers were very short, daggers in comparison. One wouldn't want to take one of those to face off in a fencing dual with the kid down the street who had a Darth Maul Saber. And they weren't that fun to dual against each other.

Nevertheless, Hasbro has decided to continue with Transformers Role Playing toys, with a pair of new entries.

For the Autobot minded, we have Optimus Prime's Energon Rifle, (The design of which is uninspired and makes me wish they had based it on G1 Prime's Laser Rifle, but that's a subject for another review,) and for us who take a walk on the wild side, we have the Sword of Megatron. 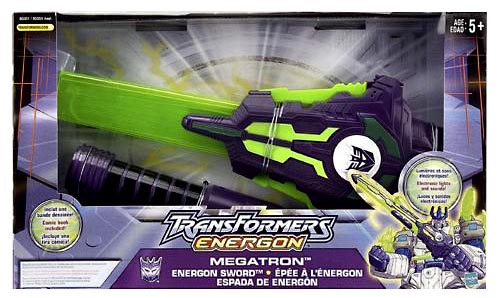 Ah, The Sword of Megatron, the Iconic weapon that Megatron has used to conquer civilizations for centurys, (even though no one remembers him ever using it in Armada) played a critical role in the first few episodes of Energon, when Scorponok used it to gain the allegiance of the disenfranchised decepticons on the false promise that the Energon they stole would go to reviving the fallen Megatron. Ofcourse, Scorponok and Alpha Q were thwarted when Megatron found a way to revive himself, thank you very much, and drive Alpha Q out of the Carcass of Unicron, (not to mention giving Scorponok one of the most spectacular beatdowns in Transformer history.) Megatron then reclaimed his sword and used it to launch a devastating attack on the autobots, until Signal Flare found a way to Duplicate the sword, Allowing the Omnicons to hand them out to the Autobots like they were party favors, (Kicker even got One!) After which the sword thing sort of became passe and hasn't been referenced that much since. 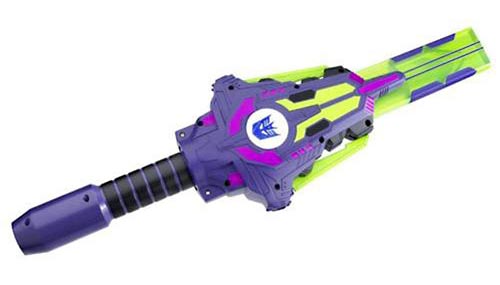 But for like a month and a half there, Megatron's Sword was the badest weapon in the Galaxy and now YOU can have one! Believe me, this is the real deal, not some Omnicon Ripoff, because it's got the Decepticon symbol right on it! So what can I say about it? Well, it's designed after the original incarnation of the anime sword, so that means no Armada-Megatron-Tank-as-hilt. For that I'm grateful, because if the tank hilt had been implemented it would have hurt the toy. It's got a nice big handle on it and an elaboratly designed hilt, all cast in Green and Purple. The Blade is transparent green plastic and is retractable, a la toy Starwars Lightsabers, but I suspect that this was only so they could package it. once you extend the blade it's difficult to colapse again, so I'd recommend against it. So I'll talk about the electronics. Pop a pair of "C" batteries into the hilt, and you'll have a light up sword and sound effects! It's got an elaborate power up and Power down effect, and once on will do a continuous hum. If you bang the blade of the sword with your hand, (or, with another toy sword if you were in a toy sword fight,) and you will get one of three distinctly different clashing/glancing sound effects. Just the fact that they implement three different sounds for clashing is a detail I appreciate. It has one more sound effect, which, as Iconic as it is in the Transformers lexicon, seems out of place here. If you press the Decepticon symbol Button, you will get the G1 Cartoon Transformation sound effect, (It sounds like the same one implemented for Armada Overload last year.) The Sword doesn't really "transform," but pressing that button will also release a pair of supplamentle blades on either side of the sword, which makes it appear sort of like an upsized version of that one Klingon knife from Star Trek. But still, hardly a transformation. 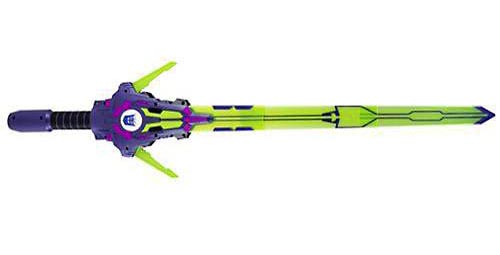 In Closing, I must say I really enjoy this one. The sword is nice and big and menacing, and will definatly inspire fear when you take it to the neighborhood faux fencing matches. (What, you don't sword fight with your buddies any more?) and it's definatly cool to be holding the All powerful Sword of Megatron in your hand, Even if it isn't as Iconic as I pretend it is. A must buy, If you still have a sense of childish fun.