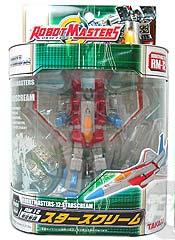 When the first pictures of Robot Masters Starscream surfaced, the fandom at large was in shock. Here in a nice deluxe size, was G1 Starscream, only updated with today's toy technology and posability. Many hailed the figure as the closest thing to getting a Masterpiece Starscream. Now, with the figure out, does he live up to such lofty expectations? Is he the best Starscream ever made out of G1 or any other brand? I will try my best to answer those questions in this review.

Vehicle Mode: Like I need to tell you this :P Seriously, in this mode Starscream is an F-14 and is a drastic improvement over his G1 ancestor in almost every way as he addresses the numberous design problems he had. Some of these improvements include no gap between his legs, his landing gear is all built in (no need for removing it here) and a much more streamlined and stable form. THe only real step down is that the canopy for whatever reason is not transculent. Still a very nice update to the orginal for the most part improves 8/10 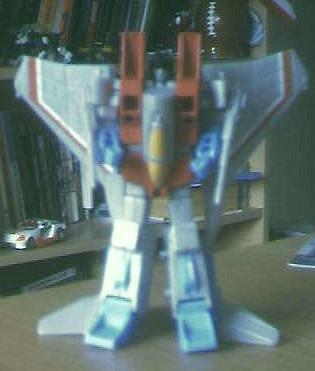 Robot Mode: Here's where most of the disapointment to RM Starscream lies but first Ill touch on the good points: his colors are far more accurate than any incarnation to date as the pale blue in particular are all spot on. The mold sclupt overall is pretty good but does have some proportions issues, mainly with the girly arms and a head that would have been better served with a little more mass. The wing design used here is a drastic improvement over G1 as this time the wings are mounted on balljoints, requring no disassembly for transformation. Another disassembly done away with are the hands as now they fold up into the vehicle mode rather than needing to be detached. 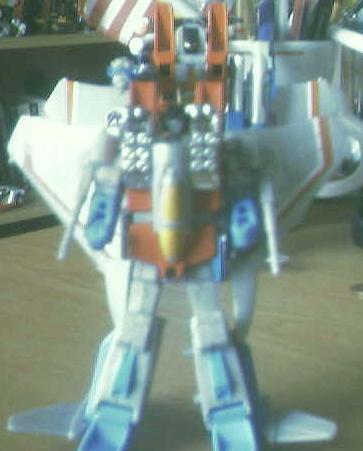 Accessories wise, he comes with two null rays which can be attached to his arms or on the underside of his wings. These are far more streamlined than the bulky G1 versions and look great attached to Starscream in either mode. In addition to these, Starscream also comes with two chrome missle packs that attach to his chest. These are are great and feature opening and closing missle covers. 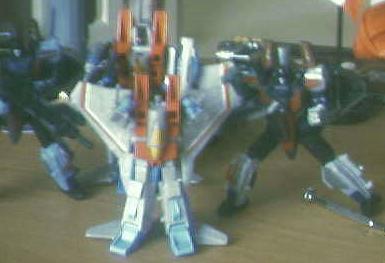 Now on to the bad: Starscream has some of the most pitful articulation I've seen in a new mold figure in a while. He lacks knees and while his legs are ball joints, the design prevents them from spreading out further than what is seen in the pictures. He's not a complete brick from the waist down as he does have swivels and in addition to being able to part his legs, they can move back and forth. The upper body is somewhat an improvement as he posseses numberous points including elbow, wrist (both up and down) swivels and his head is on a balljoint. Unforutently, the design of the mold and character prevents the figure from using his articulation fully as he cannot use his swivels fully when his arm guns are attached and while the new wing design does help some, it still gets in the way of arm movement. Masterpiece Starscream this is not. 6/10

Overall: Is RM Starscream the closest to a Masterpiece Starscream, encompassing all previous incarnations of the character? Most certainly not, as some like Energon Starscream just put this version to shame in nearly everyway. 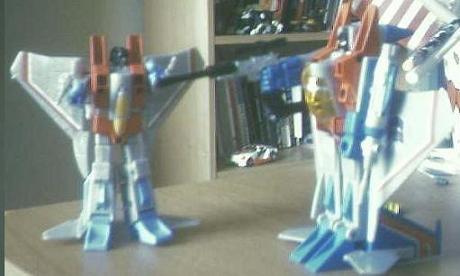 Is he the best G1 incarnation of Starscream? Absolutely, but considering his competition in the 20 year old G1 Starscream toy thats really not too hard a feat. So what is he then? A a good (but not great) figure, one that's worth owning if you're looking for a great representation of G1 Starscream as apperence wise, he's pure gold. I'm just somewhat disapointed in this figure as with a few more points of articulation, could have been one of the greats.6.5/10 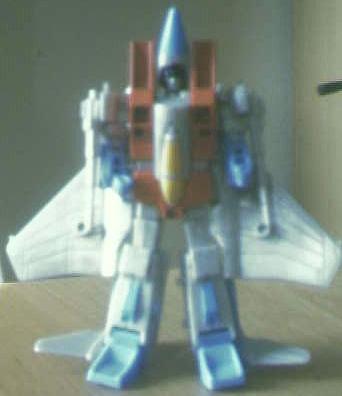