Master Megatron, the merged form of Megatron and Unicron, what can you think of this creation? Well, my views are laid out here, so they might be the result of drunken stupor, or well thought views. Its up to you.

Well to just say it, this mode is basically likened towards a batmobile figure, apparently its supposed to be a prototype formula one racer. But this mode works out very well, it looks like a long bed mobile fortress if you think it suits him more as an emperor. But if not, well its a racer, the cons? Well there are a few, namely, the shin guards, they're not exactly folded anywhere, they're just left behind, with little nooks that are supposed to hold them in place from their edges, it just doesn't work. Way to destroy a perfectly good mobile mode. Your spoiler will probably end up having to be properly adjusted. Nothing perfectly fit. 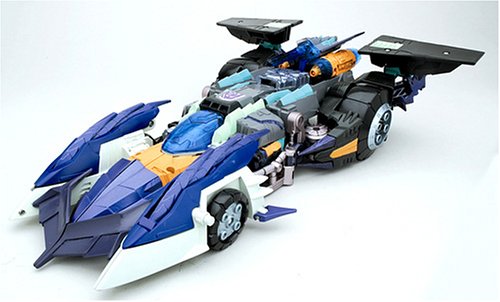 Part the front, fold both back, insert pegs into one of the four outer peg holes of the large tires. Adjust the little wings, and thats it. It err... reveals, its... well, girth. (Well that explains the big feet).... ANYWAY....

This jet, well, I don't know how to describe it, I suppose its a cybertronian jet. Its weapons are the same as the car, the hind missile launcher. So theres not much to say about this mode actually, just the millions of jokes you could come up with about the nosecone, since its made of rubber. It looks SOMEWHAT like a jet I suppose.. 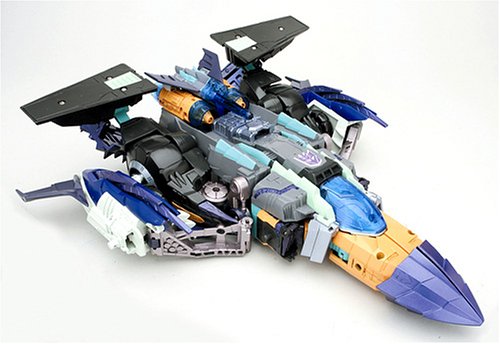 Part the legs from its pegs and spread them wide so you may be able to fold the hips down. FOR SOME REASON, the hips lock halfway down, which is very wierd, anyway, unlock it, then fold it all the way down. Straighten the legs, fold in the feet, then latch the rubber shin guards on the center hole pegs of the larger wheels. Pull back the parted wings, just get them out of the way for now, then part the revealed nosecone, (ow). Then spread apart till shoulder pads are exposed, fold out head, open horns, push cockpit into body. Fold down flaps to make his 'ribs' fold down upper torso with tiny pegs inserted for extra stability. Fold rubber nosecone halves and slip the 'rings' on his wrists so that nosecone halves may be able to be positioned as forearms. Adjust wings anyway you'd like. 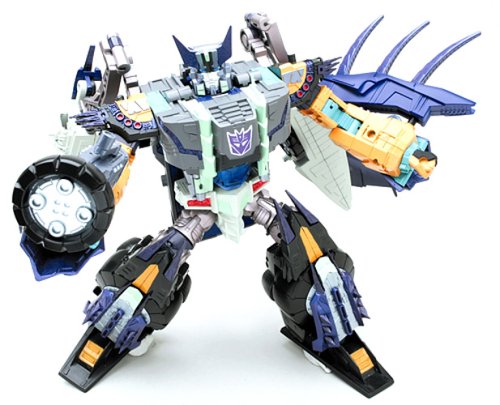 This form has many points of articulation on him, his arms have 6 points of articulation each. Two on his elbow in case you're wondering. 5 points on his legs, 6 if you include waist. Head moves left to right. If you position it right, his wings can actually be made to flap. It just adds to his overall cool look.

His key ingnites his thrusters to pop up, but its more of a vehicle mode usage. His robot mode just makes him have a big butt. The ignition just unlocks his two weapons, one being a forearm accessory, which enables him to have a melee spiked weapon or shield. And his.... gun. Apprarently its supposed to be a gatling handgun. Thats just terrible. Baby blue eyes are his piping effect. A little strange. 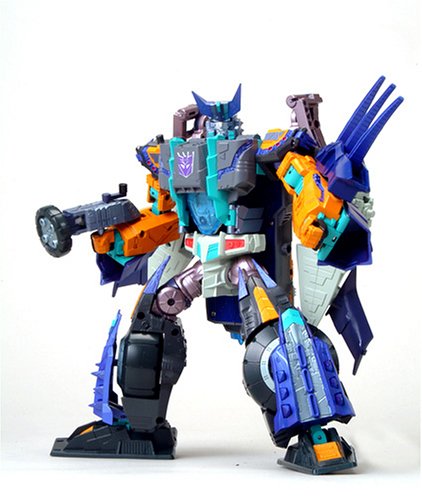 Theres alot of talk on his color scheme, the rubber, the weapons, the overall look. Well, in my view, yes, the handgun is a weak thing. BUT. With imagination, you end up with a very cool toy. Let me explain.

How I use him is an emperor like evil villian. The colors indeed have a strange effect, but, the strange colors are actually bring out very good traits about this character. One, the colors signify his merging with Unicron, two, it shows just how extravagant he is as enemy number one of the universe, three, its a very regal evil look. Perhaps it would be deemed so as a chinese view but it gives you that effect. I have to say the colors were well placed. The green makes it quite interesting even.

Weapons wise, I'd never put anything in his hands, I prefer to put them on the sides of his forearms. They work very well for me because his gatling gun becomes an energy swirling converter, I just deem he has control over energies. Sorta god like.

His wings, I usually just perch on top of his shoulders, then pull back and flap. All just my opinion. He certainly is a very interesting character. His triple changing is a little terrible though.