Vehicle Mode
Backpack is a blue Armoured Military Vehicle that carries missiles and two cannons. His treads and wheels are dark blue. His vehicle mode is accented with dark yellow (the missiles revealed by the force chip are this shade yellow too) and silver. I like the color combination a lot; however, why such a scheme is chosen puzzles me. I have never seen any Armoured Military Vehicle that is blue! The paint application is pretty good on him too, no bleeding out of any edge. 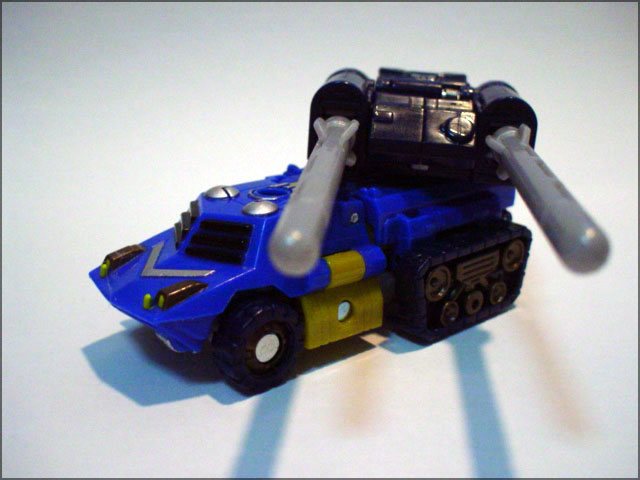 He is slighter smaller in scale than Jackshot due to the fact that the missile launcher takes up quite some height. The launcher has 360 degrees rotation, a plus point for his vehicle mode. The grey missiles do not fire; they can only be removed and inserted again. The â€˜holeâ€™ has a catch for the ball part of the missile, locking it into place. 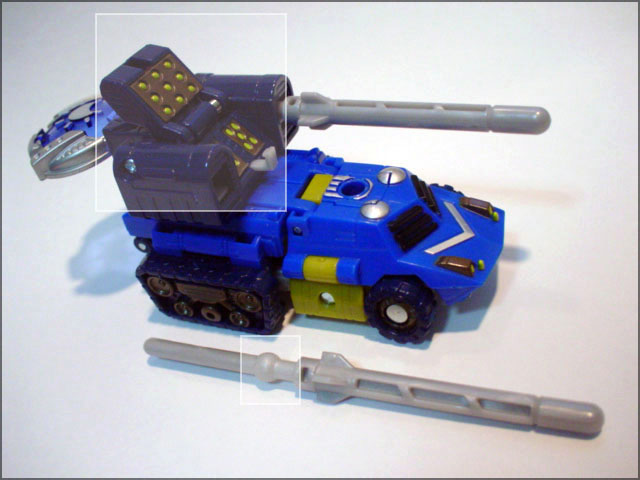 His twin barrel gun attaches to the back of his head in this mode and acts as twin cannons. Since it is a peg-and-hole combination, the twin cannon has also 360 degrees rotation. Very nice!

Robot Mode
When I first saw Backpack in his preview pictures, I thought to myself, â€œWhat a horrible head and torsoâ€?. I assumed the yellow circles were his eyes. Only after watching the show did I realize it was his goggles (which I donâ€™t think he can wear, even in the show.) That revelation was actually the driving force for my purchase of Backpack. Although the head does look nicer in person, the torso remains unappealing. 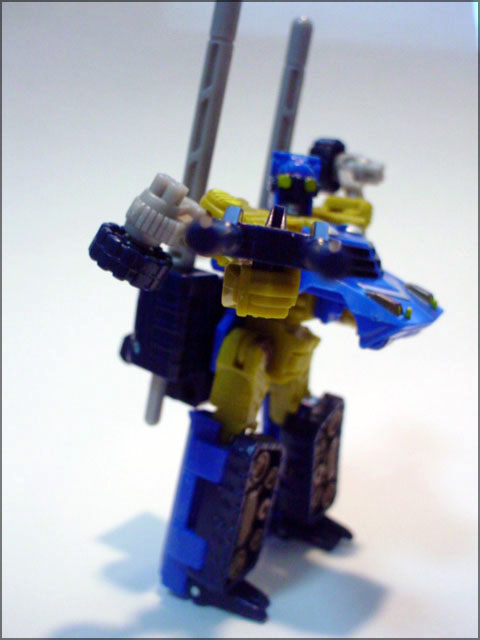 I wished half of the front part could be folded down, or a 2 hinge system at the neck for the front part to fold down ala â€œG1-sideswipeâ€?. Back to the figure, more dark yellow is revealed on his forearms, shoulders, and thighs. His faction symbol on his left fist is very small but surprisingly clear. The front wheels portion are positioned 45 degrees to the shoulder (can be moved through 90 degrees). They look like rail guns to me, definitely boosting his looks in terms of firearms/power. 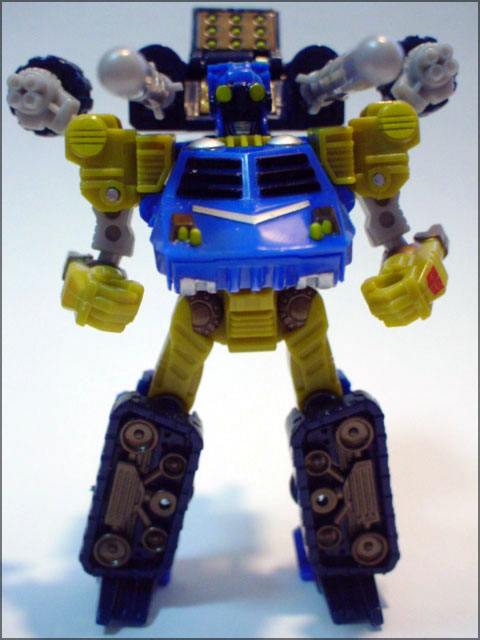 While Jackshot has good poseable legs and bad arms, it is the opposite for Backpack. His arms are quite poseable but his hip and knee can only move in one plane of freedom â€“ that parallel to the front of the figure â€“ due to the way the legs transforms. This detracts from his robot mode quite badly, substantially restricting his poses. One redeeming quality is the ability to position his launchers on his back to face the front, which is quite stable while doing so (perhaps due to the straight legs).

Overall: Good figure with a vehicle mode better than his robot mode.