Vehicle Mode
In vehicle mode, Jackshot is an off-road vehicle. Primary colors are green for most of the body, black for the tires and orange for the windows. On the front of the car and on the sides are gold lines, which take off an otherwise blockiness. However the gold lines are not applied properly, they end awkwardly in front of the windscreen and the lines are not really straight but look like they were drawn with a freehand. 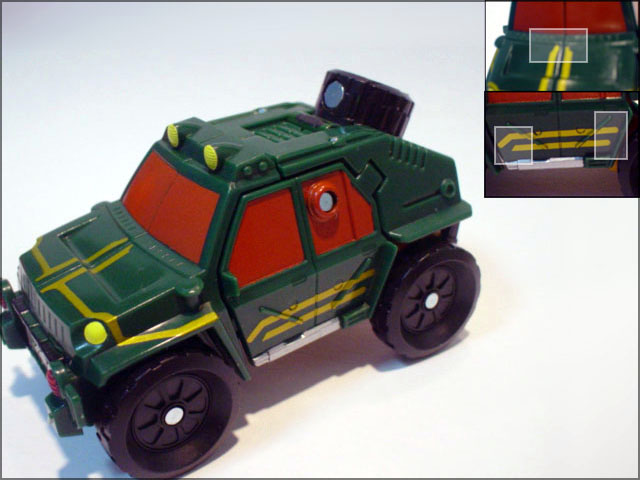 His Alt mode reminds me of superlink Roadbuster, especially the opaque windows, which is a minus point in both toys. It is a pretty solid-looking car mode and in the right size too.

Verdict: 6.5/10 Average toy, windows should have been transparent/translucent.

Robot Mode
In robot mode, more dark gold is revealed in the form of the thighs and forearms. There is also some silver on the chest and the shoulder. The colors work very well together here. However, out of the 3 basics in wave 1, I would say he has the worst robot mode. Firstly the articulation of the arms is very restricted. 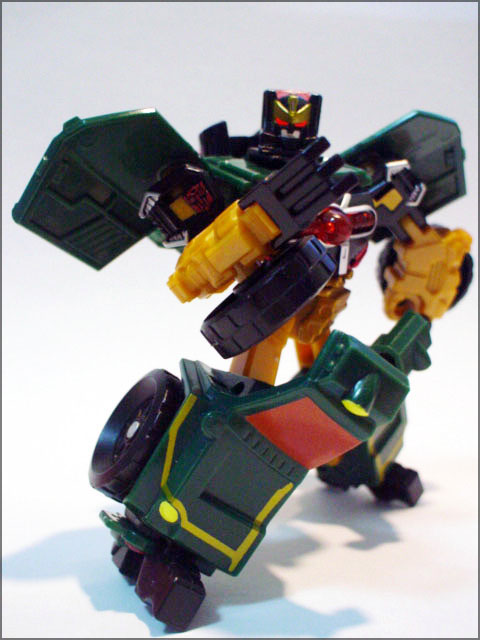 The doors, which form the shoulder armor, cannot be rotated with the upper arm part. Instead, you get an awkward ball joint on the shoulder. The forearms are positioned at an angle to the upper arm, hence reducing the awkwardness , giving him some redeeming natural poses with his arms. His legs however are fully poseable with ball joints for the hip and a normal 'Disc' joint for the knee (allows only one plane of freedom hence like a disc spinning). I donâ€™t really like windshield sticking out from his knee. Perhaps a hinge to fold them down would be good. He also has 270 degree rotation capability for the waist.

The head sculpt could also be bigger, say, 10% to 20%. Takara should have been able to do that easily. His head appears to be slightly smaller than it should. His force chip causes his chest projectile to launch. Maybe they ran out of gimmicks to put in Jackshot, but he is the ONLY toy in Wave 1 to have a projectile activated by a force chip. The rest, like Convoy, MasterMegatron and Starscream etc has a button specific to launching the projectile

Verdict: 6/10 Good posability in his legs redeems him a point.

Overall: Jackshot is an average figure. He could have been better though. Only completist and people with money to spare should really get him.