Exillion is a fast-looking sports car in this mode, similar to R.I.D. Sideburn. He is mainly metallic light blue with dark blue (vents on hood, wheels) translucent yellow (headlights and windows) and a little maroon. On his spoiler, there is this huge yellow motif which looks like a stylized flame. On both sides, there are depressions where the one on the doors look like reinforcements to the structural strength of the car and the one at the back in front of the rear wheels look like intake vents similar to the ones found on the hood. There is a very miniscule cybetron faction symbol on his hood, in red on white background. If you look beyond the windshield, you will that there is space for 2 occupants in his vehicle mode, complete with a steering wheel! Now that is a nice touch. 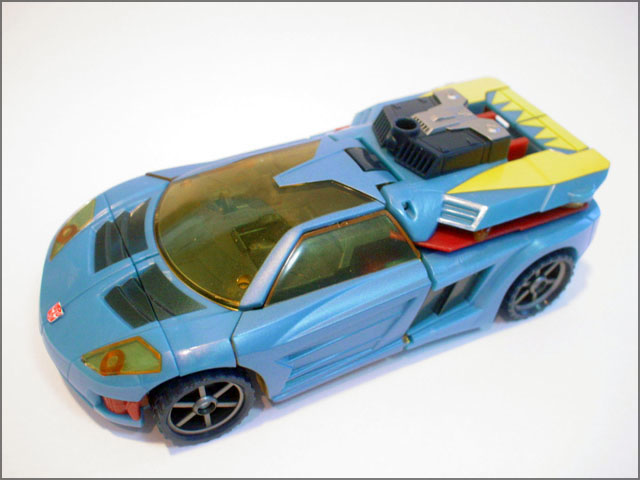 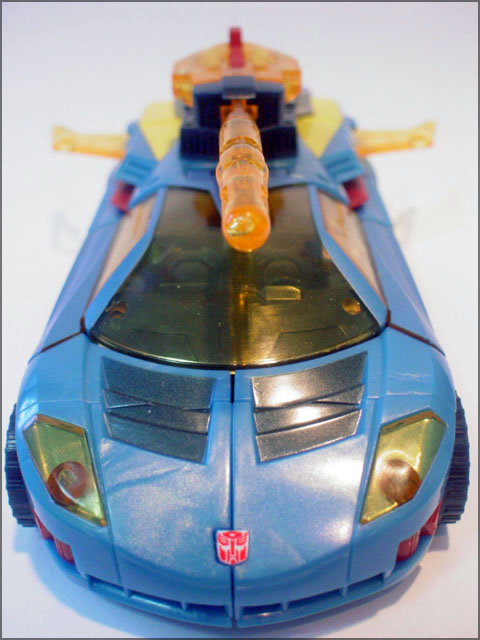 Exillion's gun can attached to rear roof via a round peg which allows for 360 degrees rotation. Force Chip activates little wings to flip out below his spoiler. These wings are translucent yellow in color, similar to his windows. It does add to his 'speedy' looks.

The only fault I could find with this would be that the wheels are plastic, as in the case of all the Galaxy Force figures so far. I would have preferred rubber. That would have made Exillion, in some sense, complete. If they had rubber wheels for Robots In Disguise/Car Robots, I do not see why they could not have done the same for Galaxy Force. It would be a much welcomed extra, but does not detract much from the toy anyway. Still, this mode remains one of my personal favourite in the Galaxy Force line. The colors, the shape, the 'feel' of it, everything seems right with Exillion's alt mode!

In robot mode, more maroon is unveiled and silver, too, on his face and his torso. The silver goes pretty well with the number of screws(a total of 8!) that is exposed on the backpack and the shoulder, whether intended or not. There is also 2 yellow triangles on his shin, continuing from the yellow motif on his spoiler. His 'speediness' definitely translates well into his robot mode. 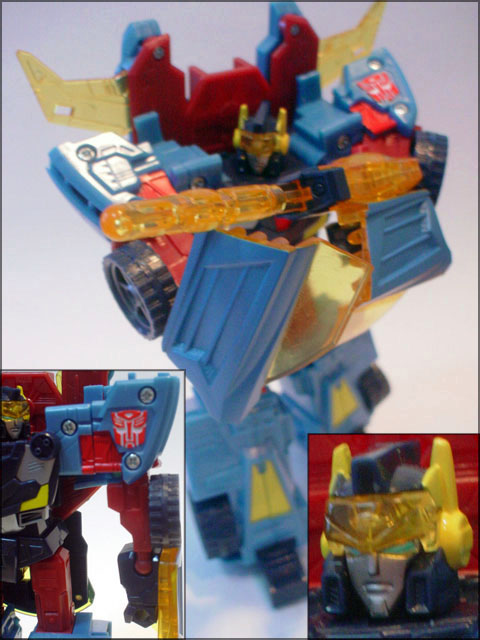 There are a few minor things I do not like about his robot mode. Firstly, in the show, his visor and earpieces are opaque yellow in color. In this figure, his earpieces are bright yellow, similar to the motif on his spoiler, and his visor is translucent yellow (right inset in picture above). It does not allow for light piping in this case. The reason is quite simple actually, the earpieces are dark blue plastic painted yellow, while the visor utilizes the same translucent yellow as the windows. There is no opaque yellow plastic in this figure, hence the half transparent visor piece. I would have liked it opaque yellow though.

The arms are also disproportionate (refer to left inset in picture above). The elbow bends below the wheel, where a more natural pivot point would be at the center of the wheels. They could have used axis joints where the axis would be the one for the wheels too, but that would limit the poseability of his arms as compared to the current ball joint. Exillion's arms can move inwards only, and not outwards, restricting the poses achievable with him. The hip joints are square parts on ball joints in a fairly tight space. Exillion's legs move around 100 degrees to-and-fro and about 30 degrees sideways due to this constriction. 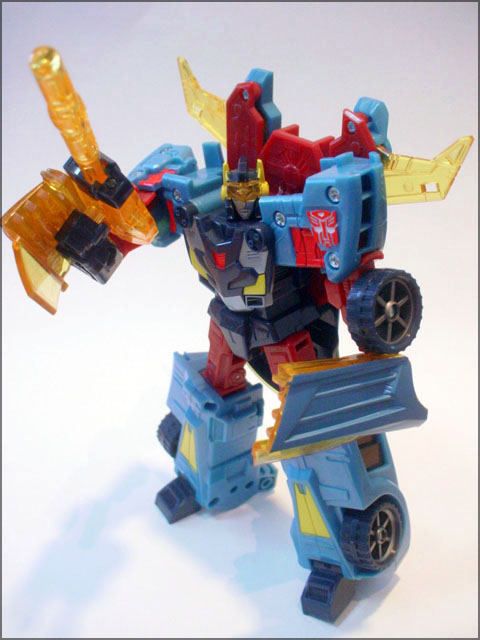 I usually leave the wings out in his robot form. It completes a 'V' shape silhouette thats starts with his waist, goes on to his shoulders and then the wings. Despite some limitations in poseability, the poses he can achieve are natural, unlike GC-06 Backpack. If this is a continuation of hotshot from armada/energon, I have to say this is a very good improvement over those figures. On a side note, the packaging of Exillion is exellent because there are no twist ties!

Verdict: 8/10 For a Deluxe size class, Exillion is a very good figure.

Indeed for his size class, Exillion is a very good package, with a nice alt mode and robot mode.