Landbullet is a futuristic 3-wheeled vehicle in his alt mode. He is shaped rather like a plane on land, with that streamlined shape and fighter-jet cockpit. His colors are very well coordinated, some off-white and gold on a main combination of dark olive green and bright green. His wheels are transparent blue, similar to the wheels on Gasket. Without mistake, we are looking at a Destron vehicle. Landbullet does indeed look like a bullet on land. 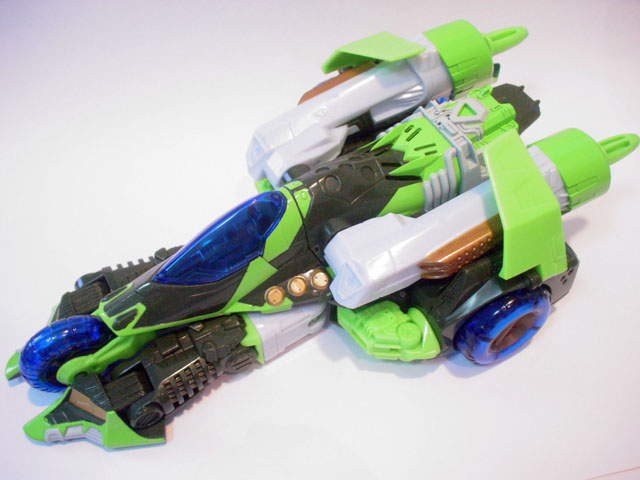 When Landbullet 'ignites', there is a powering-up sound and his two 'cannons' flip forward, forcing aside the bright green wings. In this mode, he looks like he is speeding up, similar to the nitrogen-fuel boost in racing cars. This is as the wings are now flat open, indicating speed or improved stability, and the two 'cannons' look like turbine engines. More detail is revealed on the top side(unseen bottom side while in normal mode) of the 'cannons'. Visually, this mode is not very appealing since most of the weight now rest in front and the rear is rather empty. The center of the 'cannons' are actually missiles as seen in the picture below. 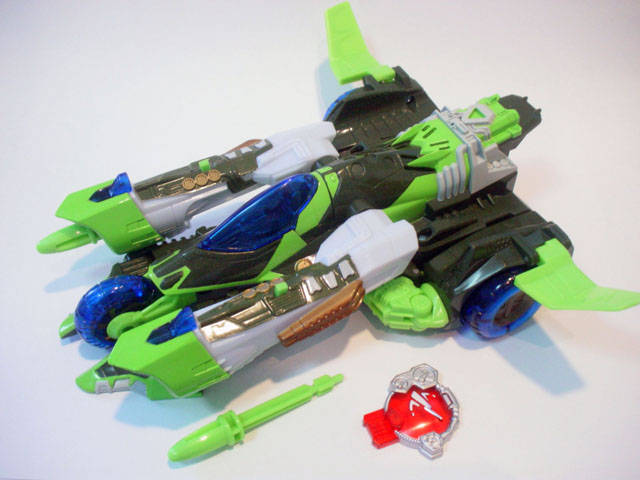 Verdict: 8/10 A refreshing car form that is nothing like before!

As sleek as Landbullet looks in vehicle mode, none of that sleekness gets to his robot mode. Instead, most of it is turned into 'power'. His robot form looks like to me a big green gorilla bouncer with a jet pack. The cockpit folds down like a G1 seeker, giving him a top-heavy look. However, he is quite stable when upright and can achieve some nice poses. The fatal flaw in landbullet robot mode is his arms. They are way too big, even for one who has to look powerful. His fist reaches below his knee when straightened out, while, according to human anatomy, most would have their fists fall in the middle of the thigh. His forearm is very big compared to his upper arm, causing his arms to be quite awkward to pose. 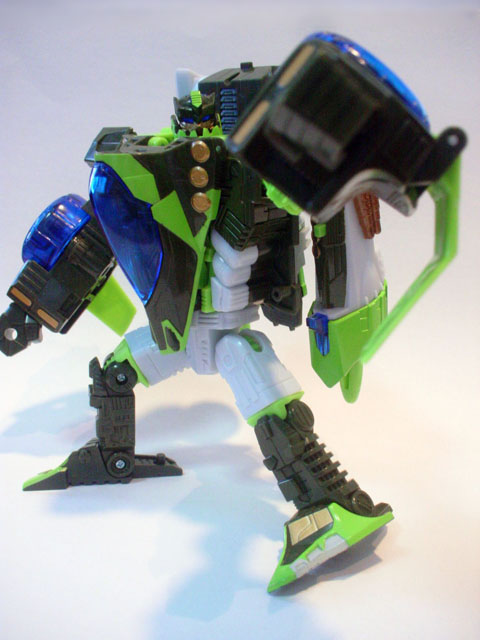 His head is very well done, with a gold mouthpiece like a ninja and an external lower jaw. The lower jaw is movable with the help of 2 little sticks protruding behind the jaw. However, the jaw is not spring operated, meaning you have to move the jaw up and down. It does not move easily too, so you will need one finger on the head to keep it still and another to move the jaw. A good attempt, nonetheless, at increasing play value. Landbullet is equipped with transparent blue plastic for his eyes, allowing his eyes to glow when light is shone into it(below). 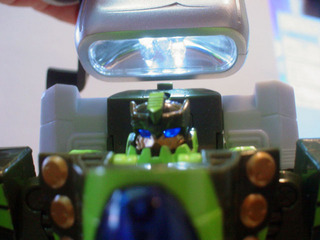 The Force Chip Ignition mode is similar in both forms. In this case, the pair of cannons now rotate 270 degrees and looks like shoulder-mounted missile launchers. Landbullet does not have much problems with stability in this mode. 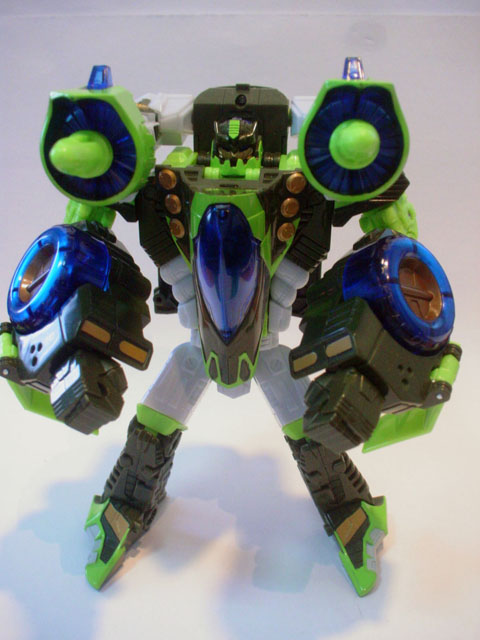 Landbullet, as a robot, has good articulation in general, good play value. The only real flaw would have to been his hands.

Landbullet is a good toy, but personally, I feel this mold would have been better if it was a smaller deluxe size figure.

I came across two interesting modes while playing around with Landbullet which I would like to share.

The first would be the stubby jet.
Simply unhook his legs and flip it over to the other end.
Move the legs 180 degrees wide and fold the knees 90 degrees upward.
Unfold the feet and wrap around the 'cannon' tips to form the tail fins of the plane and flip out the wings.
Flip the head backwards and keep the front wheel under the cockpit like in robot mode.
The last step can be omitted to achieve a less 'stubby' look to him 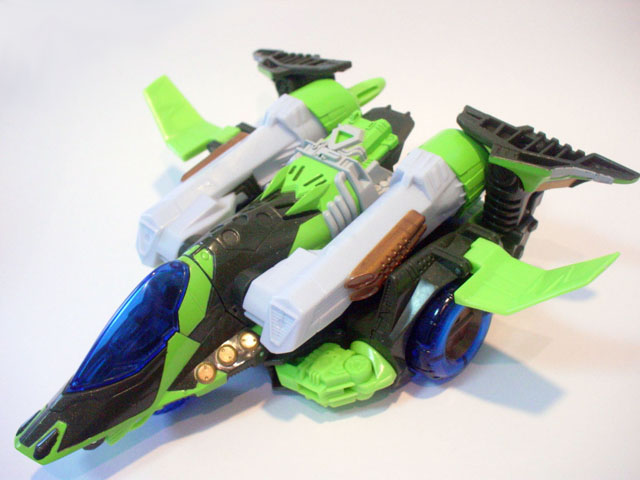 The second form looks like a battlemech.
Flip the head backwards and keep the front wheel under the cockpit like in robot mode.
Transform his arms and legs but left the legs in the middle of Landbullet.
If you rotate the waist 180 degrees, the knees can be folded backwards to increase his stability.
Whether the cannons are left on the rear or facing front is really up to the individual. 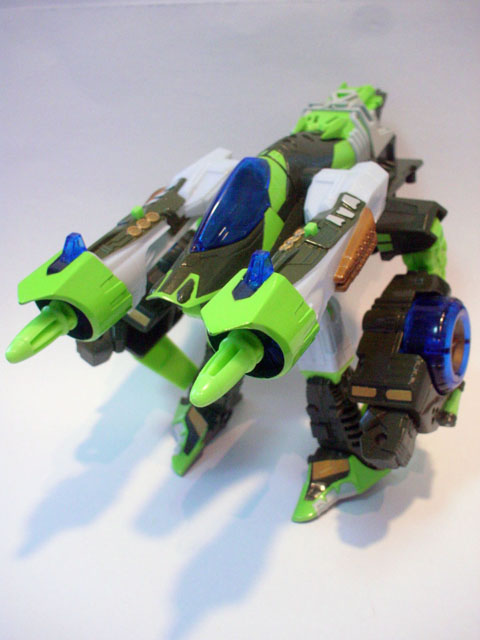