Thundercracker is a dark gray fighter jet that looks inspired by the Russian SU-37 Super Flanker. Pardon me if I am wrong, I am not too familiar with fighter jets.
The jet is sparsely decorated with bright orange and some silver for the tail fins and canards (small wings in front of the main wings and behind the cockpit). Black is used only once throughout for the nosecone tip, which gets hidden away in robot mode. However, the black nosecone tip is not out of place with the rest of the jet mode. 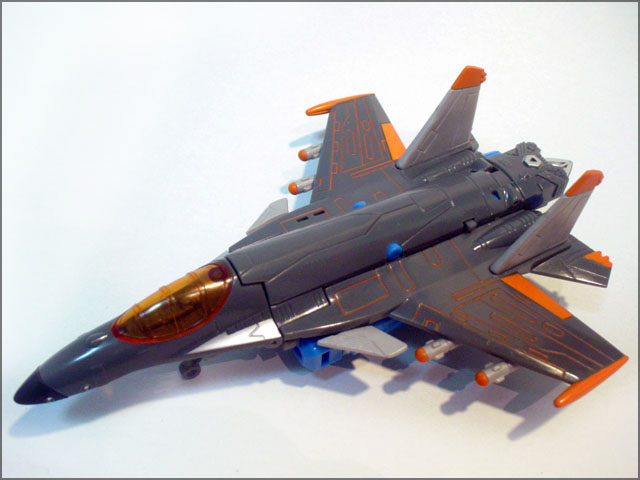 One interesting thing to note, his nosecone is shaped pointing downwards like an eagle's beak (inset A below), with the tip pointing downwards, reminiscent of the Concorde (though not as extreme as it). Rubber parts are used for the tail fins, missiles under the main wings, canards and nosecone tip. I can see some TF fans getting disappointed with the advent of rubber usage, especially after being exposed to the Die-Cast goodness of Binaltech. I believe this is, rather, for the protection for the toy. Should Thundercracker be dropped topside down, I can foresee his tail fins breaking off. I presume the missiles are therefore rubber for the same reason. Although they are made of rubber, they certainly do not look the part. I only discovered that they are so when I accidentally touched the missiles! Material aside, the missiles serve no function in both modes except for presence, certainly giving Thundercracker that visual edge. A nod to Takara for increased in attention paid to detail for the Galaxy Force Figures. For the canards, the transformation sequence and posing certainly dictates them being rubber as they move a lot and come into contact with parts when posing.

Now on to the underside (below), there are hints of blue and robot parts exposed here. However, unlike many other TF jets, this area is not very bulky. Even the legs are shaped as part of the fuselage as afterburners. This is a very nice touch, but does not translate well into his robot mode. I will touch upon that later on in this review.

Under his cockpit and tail fins are 3 retractable landing wheels. This do not turn, rather they are meant to be used when putting Thundercracker on display in his jet mode. The real sweet deal with his jet mode has to be those bright orange lines all over his wings and center fuselage (inset B). These ridges have been painted bright orange, giving Thundercracker a very nice contrast and bringing out those lines against the gray. This is THE icing on the cake! 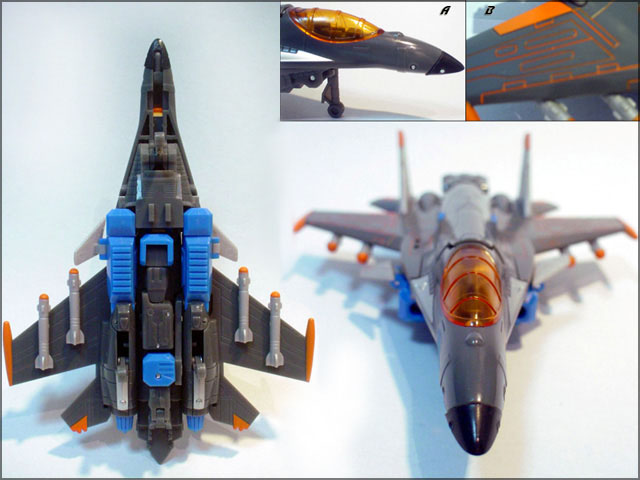 When his force chip is inserted, the top part of the center cylindered fuselage opens up, revealing a missile. Care has to be taken when inserting the force chip. I hold on to the top tip of the panel and insert the chip, then letting go and so the panel pops up accordingly. If I do not hold it down, the whole arm unhinges from the body. Another detailed are is the inner portion of the force chip slot; which is painted silver and is detailed with wiring tubes. 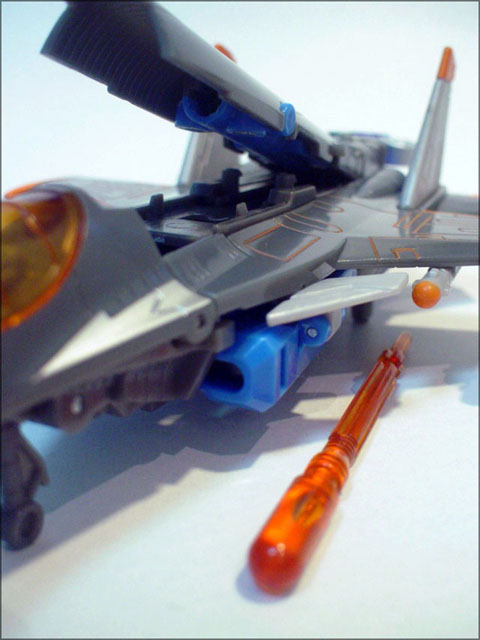 Verdict: 10/10 Thundercracker is amazing in his jet form! Fast-looking Destron jet with incredible detail to boot!

Light blue is revealed in his robot mode as part of the color scheme in the form of his feet, thighs, shoulders and head. The 4 missiles are now fully visible, pointing skywards. The main wings and tail wings rest on Thundercrackerâ€™s back, much like G1 Seekers. The attention to detail continues over at the underside of his wings, with ridges lines running along the wings. However, this back part is not locked on the Thundercracker; it may move about during posing and affect the center of gravity. 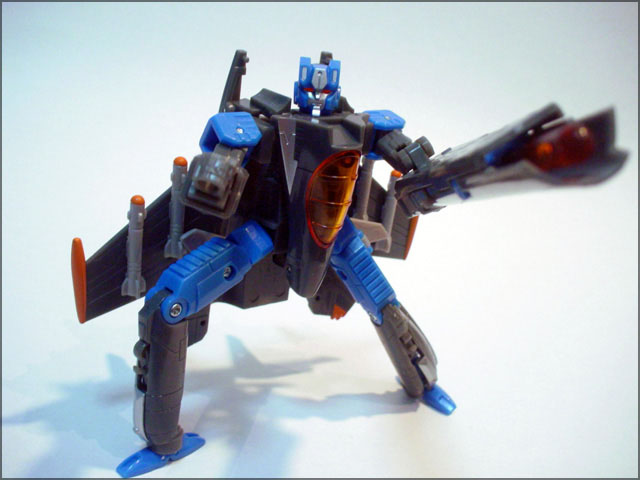 Thundercrackerâ€™s head is light blue, and silver for his face and forehead. Instead of having â€œventsâ€? as earpieces like the G1 seekers, Thundercracker has round discs in their place (inset 1). His eyes are transparent orange, allowing light to pass through (inset 2). With the cockpit as torso, wings lying on his back, his particular head sculpt and even those 2 small little parts that rest on the back of his shoulders; this is a great homage to the original Thundercracker â€“ great homage but not a great toy.His two biggest flaws would be his â€˜cannonâ€™ arm and his tiny feet and slender legs. The cannon arm should have been removable and replaced with a normal arm. Seeing how gasket could have his gun as part of his arm, I do not see why it could not have been the same for Thundercracker. It is hard to pose with it and with it moving often, the circular joint immediately above the elbow is now a little loose. 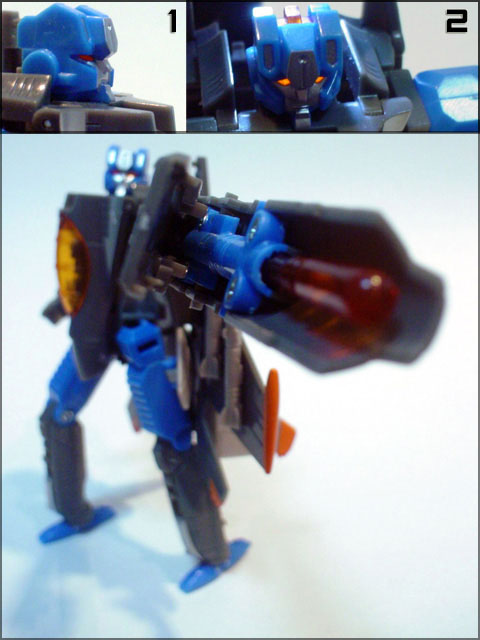 His legs are slender due to being made to look like part of the fuselage and afterburners. His feet are even smaller due to the fact that they are stored in his legs during his alt mode. Together with square hip joints and his big arm, Thundercracker has a very small area for his center of gravity to be in. However, he is not that hard to pose though, just that his poses are quite limited. These are not things that are unavoidable and hence, truly disappointing.

His force chip does the same in robot mode, opening up his â€˜cannon armâ€™ like a claw. It does not fire the missile, instead, it is launched using grey buttons at the sides (not the blue discs, those are points of attachment).

Verdict: 5/10 Tiny feet and big cannon do not go together. 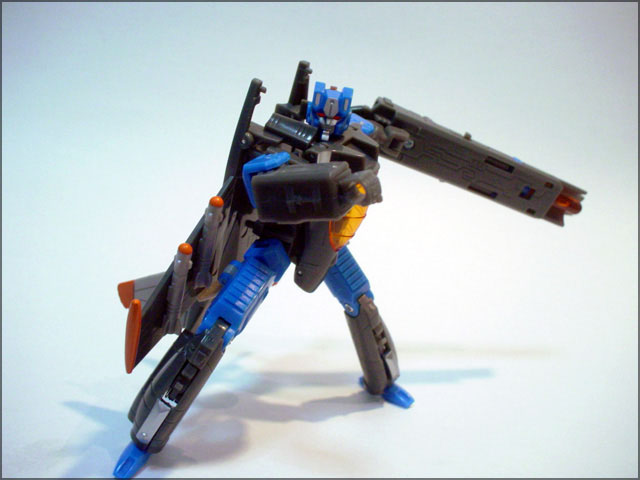 Overall, I will say that Thundercracker is a good figure, and based solely on his alt mode, is worth getting. His robot mode leaves much to be desired though.