Alternate Mode
The Mega size Starscream is a very beautiful jet in his alternate mode. Primary red and off-white, there are hints of black, orange and purple for the cockpit window and missile. A Destron symbol (inset A, 2nd picture below) relief adorns both sides of his wings which are both rotatable through 180 degrees, yet look best when flat. One of the nicest features would be the inverted â€˜Vâ€™-shaped vertical fin that is at the back of Starscream. It is accompanied by a rocket afterburner on both sides. The tetrahedron shape is broken only by the vertical â€˜wallâ€™ parts that will form the â€˜forearm-lockâ€™ (inset B, 2nd picture below) and the side of the laser cannons. The parts that will later become legs have these 3 holes in them in sets of 4, which look like intake vents. 2 pistons are added between the intake vents on both side, bringing detail up a few notches. 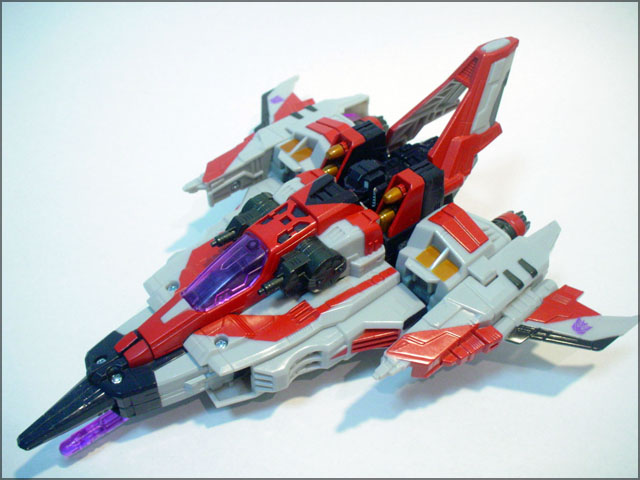 With 2 turrets beside the cockpit(below), Starscream screams â€˜bad-assâ€™! The turrets cannot rotate even though it looks like it could, which disappoints. Leaked pictures of the Supreme size Cybertron (USA) release shows the turrets apparently being able to turn. That we can only wait and see.

Many has said that he is inspired by War Within Starscream, but I feel otherwise. The current incarnation of Starscream is more or less inspired by the Cybetronian mode of the seekers seen in the first episode of the G1 series. However, the updated look 20 years later by Don Figueroa is still given recognition in this new form. WW Starscream has a very sleek streamlined look while GF Starscream has a bulkier â€˜powerâ€™ look. Yet, certain elements are retained in this new form from WW Starscream: the laser cannons beside his arms, the red rectangular relief on the shoulder and the way his arms transforms in both modes. 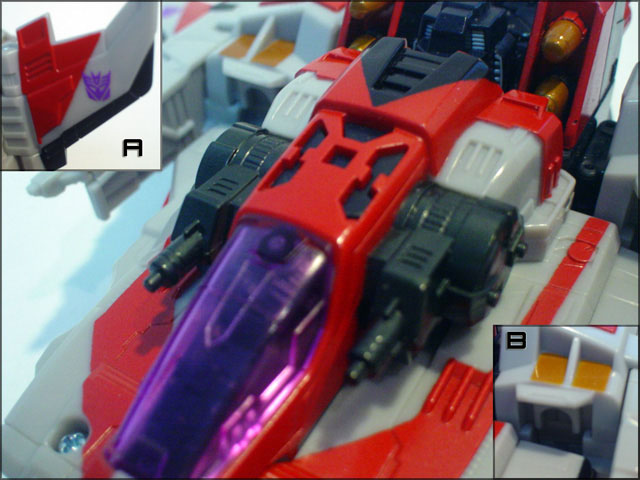 His gun is attachable to the bottom of the plane, rather like a missile launcher. His Force Chip unlocks two swords which swing 180 degrees, but I feel this feature belongs to the robot mode even though it can be activated in this mode as well.

Verdict: 9/10 Non-moving turrets and the unsightly hole that forms the â€˜forearm-lockâ€™ brings him down one point from perfection â€“ sadly.

Robot Mode
Starscream has a rather simple transformation to his robot mode but not overtly so. Robot parts like his arms and thighs become visible and they are all black in color. His robot form is a marvel to behold. There is a â€˜Yâ€™ silhouette in the form of his torso and wings/shoulders which I feel very visually appealing. With his inner part of the forearm, thighs, head and afterburner on top of the shoulders being black, it makes it look like he has a black core â€˜skeletalâ€™ body, with the jet parts (off-white and red) as add-on armor to him. This projects a very cool look not entirely different from what you would find in a â€˜Gundamâ€™. In this mode, I still wished his turrets could turn. Nevertheless, above the cockpit and turrets, sits a very detailed head/face sculpt, giving homage to the G1 Starscream. The face is silver, with the vent flaps on his forehead and earpieces painted silver too. His eyes are red, but are opaque. 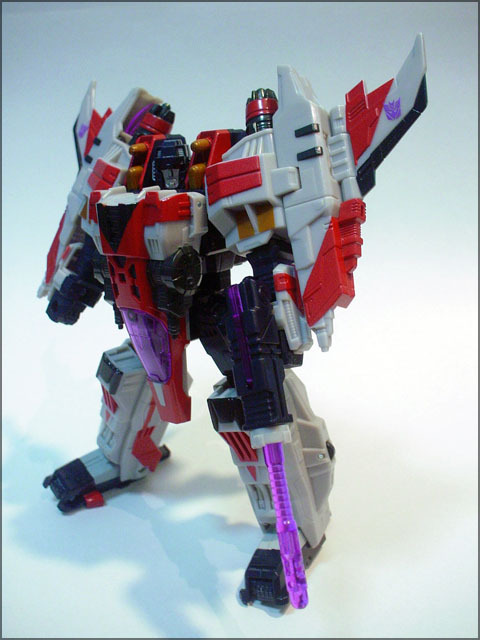 When his Force Chip is inserted in the slot behind his back, two â€˜Vortexâ€™ blades swings out under his laser cannons. These blades are very detailed with a little hemisphere in the top center and having ridges leading out from it. They do remind me of Superlink DinoBotâ€™s sword, but sleeker then those. I like blades (like Starscreamâ€™s) that hang by the side of the arm very much, finding it very appealing. His gun, while not being used can be stored behind the rear wheel on his back. 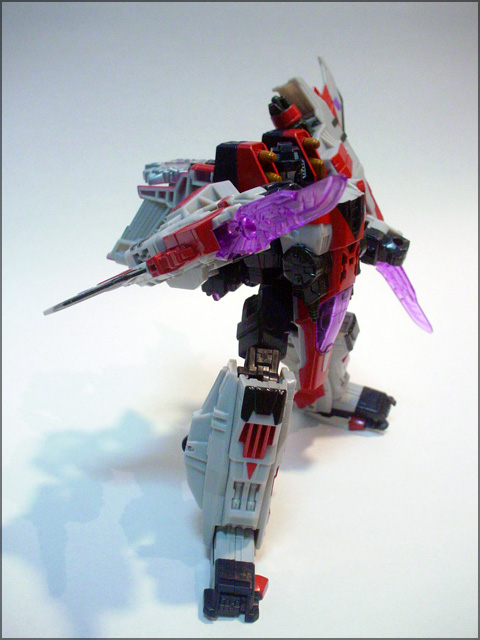 His legs are very poseable, with a total of 4 articulation joints on each leg. His hip and knee joints are ratchet joints and there is a rotational joint mid-thigh, with another for the feet, making a very articulated lower half. 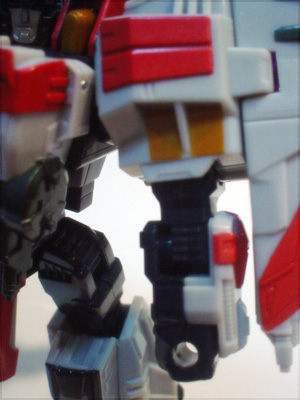 The same cannot be said of the arms. Firstly, his arms are anatomical correct in length â€“ the fist fall at mid-thigh. Yet the elbow joint is located too low beyond the half point of his arm, resulting in a very stubby forearm. It does not help that the afterburners perched on top of his shoulders â€˜extendâ€™ the apparent length of his arm. The forearm only has 3 positions to â€™lock toâ€™ in a limited range of 90 degrees. At least they could have given him a ball joint here and still made the arm itself lock to the bottom of the jet. His shoulder joints rotate 360 degrees (front-to-back motion) but the movement sideways is limited to 20 degrees inward and outwards. Honestly, they could have done better. It appears the â€˜rockerâ€™ shoulder joint is due to the force chip gimmick. The slot needs to transfer mechanical energy of inserting the chip to the bladesâ€™ lock to disengage. I am not sure how this works, but definitely this is the reason why Starscreamâ€™s shoulder joint is as it is. I would have preferred his blades to have a slot each, perhaps on the back, resulting in having to unlock one blade at a time. This would, of course, be reciprocated in greater articulation of the shoulder joints.

Verdict: 8/10 minus one for forearm, another for the shoulder joints.

Overall, Starscreamâ€™s saving grace is his sleek factor in robot and alternate mode. Starscream scores high in terms of display, average in play value and low in articulation. Yet, you will find yourself drawn to him, he is after all, Starscream.