Alternate Mode
Vector Prime is a very otherworldly space ship in his alternate mode. Some have said his alternate mode was inspired by the Star Wars sith Infiltrator. The truth is, there are some similarities like the long broad front end of the ship, external side solar panels and the â€˜orbâ€™ feature in the back, but you will have to be the judge for that. One more thing that I would bet, most of you did not know, is that there is a Star Wars novel by the name of Vector Prime. Mere coincidence? We just might never know. 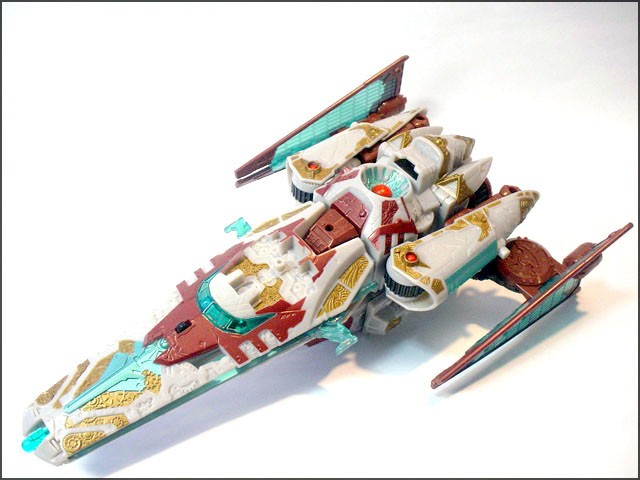 Back to the figure, Vector Prime is mainly off-white, with equal amounts of brown and teal, and then some gold. What would have made him great would be to substitute his off-white with gunmetal gray or silver. However, I am quite happy with him right now.
Vector Prime has a lot going on in his alternate mode. Intricate details can be found all over him. In the section in front of the cockpit are cut-away panels showing gold gears interlocking. There is a sword motif (below, A) in teal running down the center directly above the missile launcher (at the tip of Vector Prime). The circular hinges connecting the solar panels to the ship is also decorated with the â€˜gearâ€™ relief (below, B). His solar panels are transparent teal, with brown frames. The panels have ridge lines that run rectangular, giving them a solar panel look. On his right side, the ship has a cut-away section showing gears running (below, C). On the parts that become his feet later on, each foot has a unique radar dish attached to them (below, D). Also, the tips of his feet have 2 guns sticking out. In the center of the ship is a spherical depression that ends in a small red orb that looks like some sort of reactor core. One thing to note, the bottom of Vector Prime, with his legs flipped out, has the same amount of detail as the top, but is left unpainted, which is a pity. 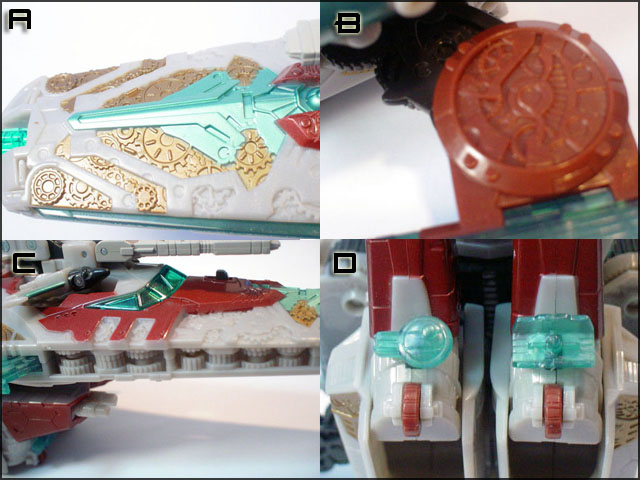 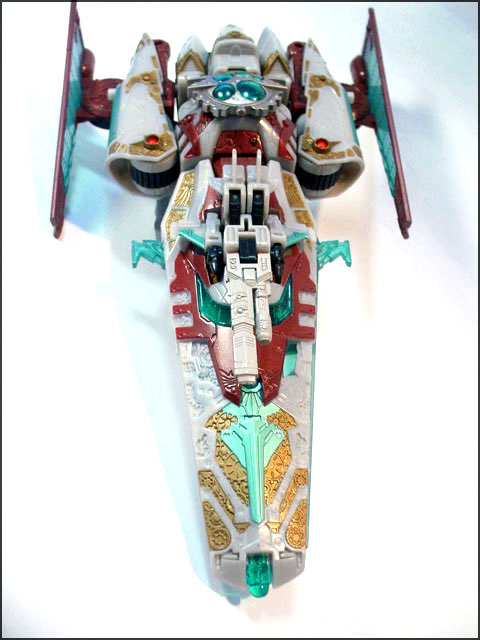 The Force Chip attached to the slot and covers up the â€˜orbâ€™. There is no mechanical Ignition Feature for Vector Primeâ€™s Force Chip, only sound, which sounds like Vector Prime traveling through space.
Verdict: 9/10 Interesting alternate mode, but the off-white plastic and unpainted detail throws it down a point.

Robot Mode
His transformation sequence is quite simple, rather like unfolding the spaceship. You would think that with the effort they took to make his details, he would have an equally complex transformation â€“ yet this is not to be.
I also have come to realize that the gold details, and some of the brown ones, are wavy in nature, reminiscent of the â€˜wavesâ€™ in olden Japanese paintings. The golden patches on his forearms resemble stylized tiger faces too! 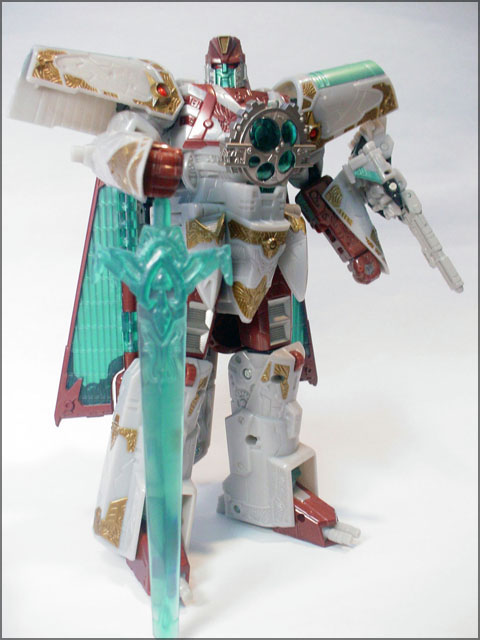 The forearm guards, big shoulder armor pieces, the helmet-like head, the cape-like shaped formed by the folded solar panels and the shipâ€™s front end give him a very medieval, very knightly look. A back view of Vector Prime shows more of what I am talking about: 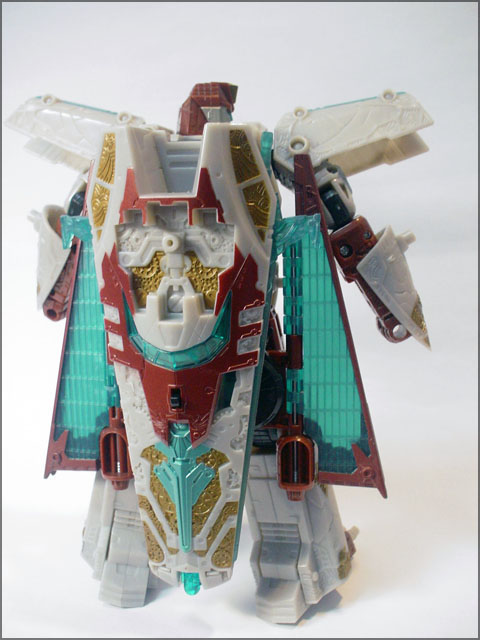 Vector Primeâ€™s head also somewhat resemble the autobot Symbol. The center piece of his torso is the same spherical depression found in his spaceship form. In the show, that, coupled with the Force Chip, produces a force field. A force field might somehow be hard, ok, impossible to reproduce in a toy, hence we get sounds instead! When his right arm is moved without the force chip inserted, there is a series of sounds resembling laser gun shots. When the chip is in, the movement of his right arm results in a rather unconvincing slashing sound.
Vector Primeâ€™s two weapons would be his sword and roots as a gun attachment on either of his arm. His sword is transparent teal throughout, but I would have preferred the blade to be painted metallic teal like the top of his shoulder. 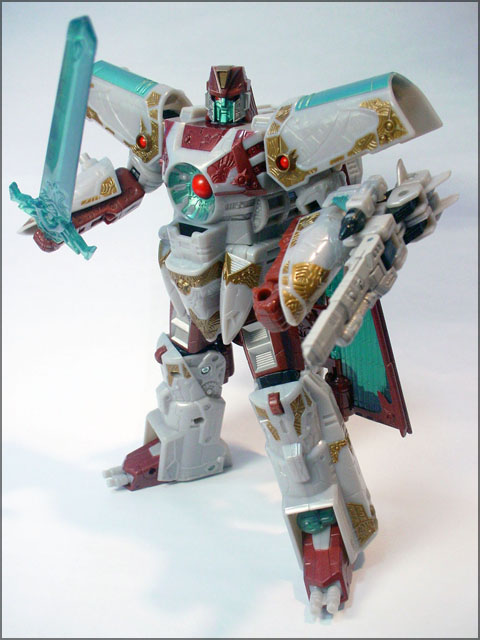 Vector Prime has ratchet joints for almost all his joints. His arms, consisting of two such joints is, thus, rendered rather unposeable by these. I would have preferred ball joints for his elbow at least to give him a wider dynamic range of poses he can achieve with his sword. His legs, however, remain rather poseable.
Verdict: 9/10 Excellent sculpt for the Mega sized Vector Prime! Arm articulation cost him a point.

Alternate Mode
Vector Primeâ€™s Micron, Roots, looks like a plane/cannon hybrid in his alternate mode. The nosecone and cockpit have been substituted with 2 gun barrels. Two teal line run down the edge of his edge, tying in his attachment to Vector Prime. His gun mode is rather similar to his alternate mode, except the wings fold down. 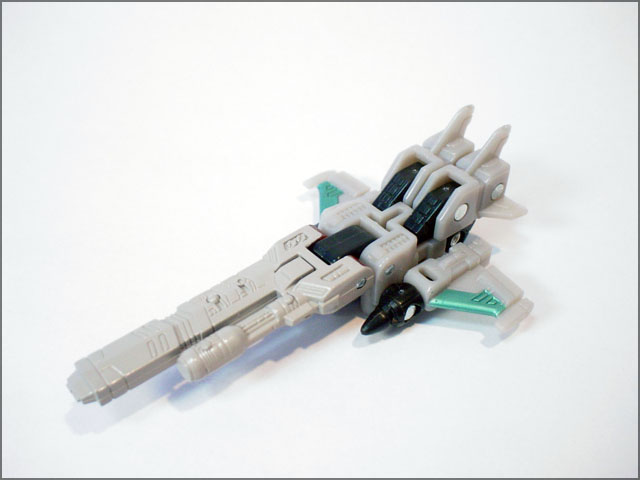 Robot Mode
Roots look strikingly similar to the Nebulan Targetmasters then as a micron. The chestplate and the face are features that one would find on a Targetmaster. Yet, the micron connection point in the waist area tells us he is indeed a micron. For a robot this size, his sculpt is excellent and with sufficient detail. He has also decent articulation for a figure so small. 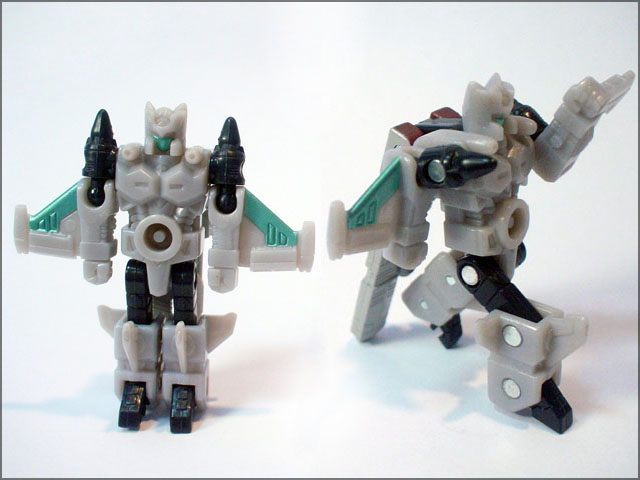 Vector Prime is worth getting, despite several shortcomings. Besides, he is the only figure currently that features micron ports. 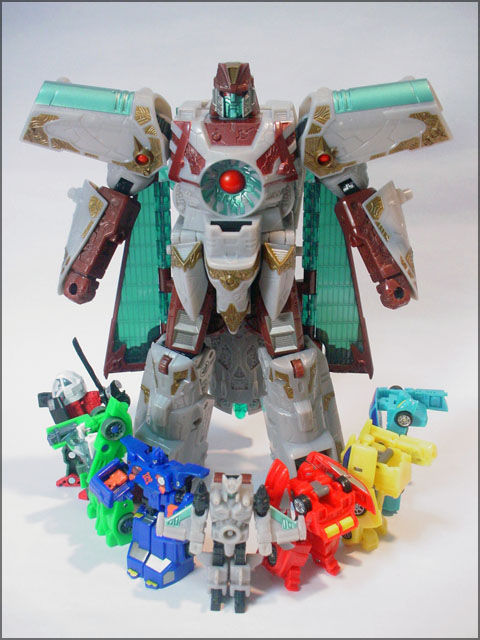 Vector Prime with the Microns of Galaxy Force