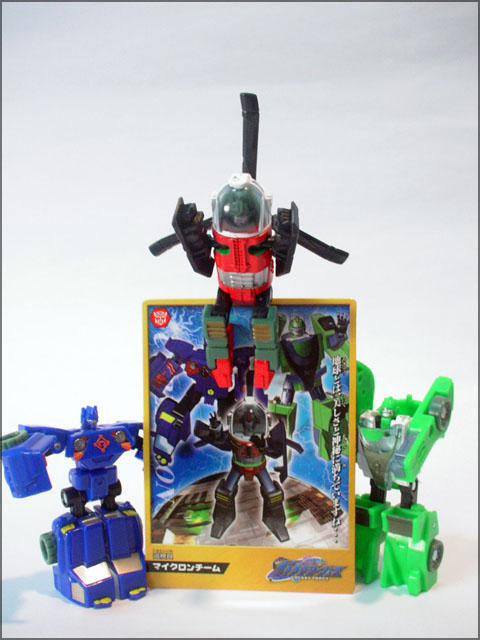 This team features 3 microns consisting of a helicopter (Hop), a truck (Bumper) and a race car (Blit). Galaxy Force's mainstay micron team, GC-07 Micron Team, unlike Micron Legend's Perceptor or Super Link's Cliff Jumper, does not combine, sadly. I do not see the theme for this team, which looks like a random group of 3 microns.

Alternate Mode
Bumper is a blue truck with silver windshield and yellow headlights and overhead lights. From the front, he does remind one of SuperLink's Roadbuster. In the back, you can see some orange, in the form of the Micron Symbol, and below that, his arms. Bumper has a rather nice alternate mode. Micron port is on the left underside of Bumper. 8/10 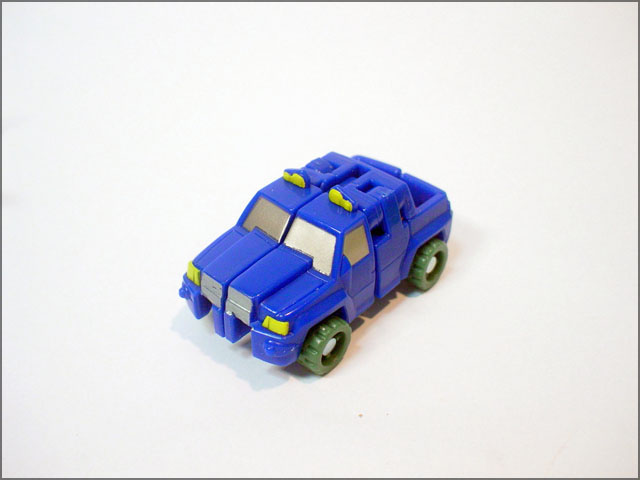 Robot Mode
The front of the truck unfolds downwards to become his legs. His head is silver and rather defined for a sculpt so small. He also has shoulder armor pieces, which is a rather nice touch. His arms are very big, giving him a bulky look. His arms move sideways and his elbows fold up. Given that the truck-end forms his hands, it looks like Bumper is holding some smiting weapon. His robot mode is my personal favourite out of the 3, because it is more proportionate then the other two. 8/10 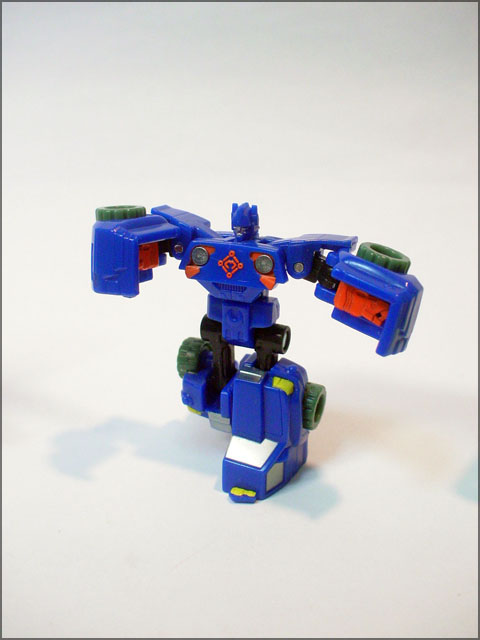 Alternate Mode
Hop is a Helicopter that is mainly red, black and white in color. His canopy is clear and it shows two seats in the cockpit. The blades do turn, and rather freely at it. The landing gears look rather large, but then again, they form Hop's arms. Hop's micron port is also on his left side - on his landing gear. 7/10

Robot Mode
Hop's head is enclosed in the canopy, which gives him a astronaut look. His face, though, is rather flat and look like he's in some sort of perpetual shock. His midsection is painted silver and section like a strong midsection. However, this is a weak attempt at shaping his cylinder body into something nicer. His legs are rather nice, with actual feet and articulated at the hip and knees. Hop is the most articulated out of the three microns. However, I do not really like his rather unshapely robot form. 6/10 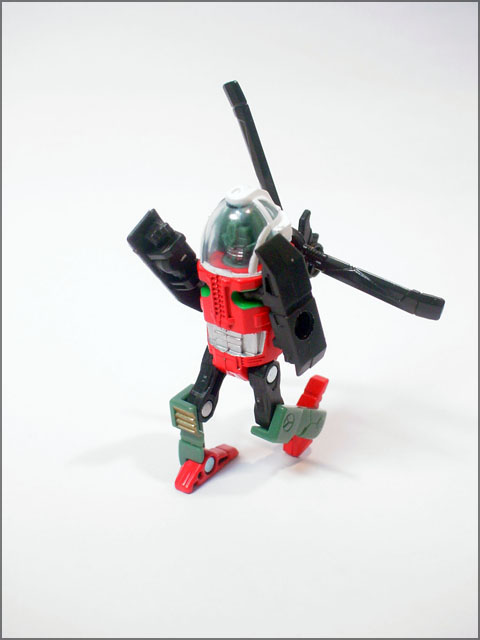 Alternate Mode
Blit is a bright green racing car, rather like a formula one race car, with a clear windscreen and white front end. Gray is used for his wheels, spoiler and front section. Blit has a very streamlined form while in his alternate mode. There is also quite some detail on his car body. I do not understand why they left Blit rather unpainted unlike Hop(Gold vents) and Bumper (Headlights). Otherwise, Blit is rather nice in his alternate mode. 9/10 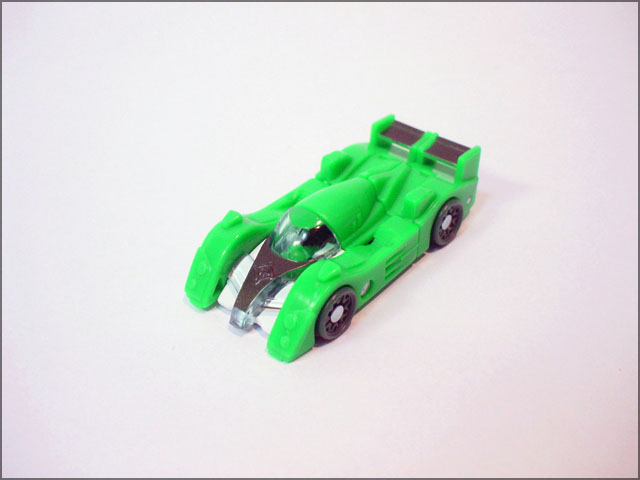 Robot Mode
Blit has a rather G1 transformation in with his front-end folds down and the back unfolds to form his legs. One thing that anyone would notice is that Blit has very long arms, extending beyong his head. This does not sit well with me, it does make Blit look a little silly. Also, the white part that folds down is painted and even after the first transformation, some of the white paint is wore off.. This is due to the fact that the two parts rub everytime Blit's front section folds down. 6/10 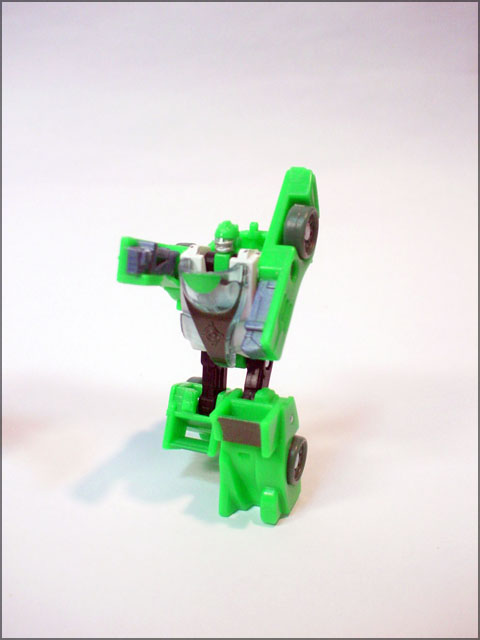 Overall, I think Micron Team is a good product, but seeing how other basic toys like Gasket and Backpack are sold for at the same price, they are somewhat notworth it. Unlike other micron teams which combine or at least have a weapon mode, they do not really add value to any figure they link to. Those that have a third mode, I feel, are the more worthy microns. I bought this micron team because I am betting on Metroplex, Primus or other transformers in the future can interact with them and there are reportedly only 2 Micron sets in Galaxy Force. It would be nice to see Metroplex in city mode with little vehicles running over him. Currently though, Vector Prime is the only figure that have the micron port feature. I would recommend Micron Team only for the completist and Micronphiles. 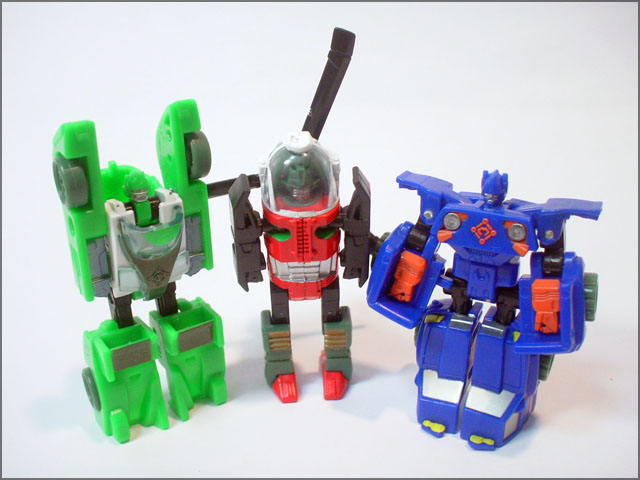 Verdict: 6/10 The score is merited on to Micron Team as a toy by itself, uncompared to other basic figures.