Alternate Mode
Here is the big one - the latest incarnation of the leader of Cybertron warriors known as Convoy. This time in Galaxy Force Transformers, he takes on the name of Galaxy Convoy and transforms into a 12 inch (30 cm) red fire engine. 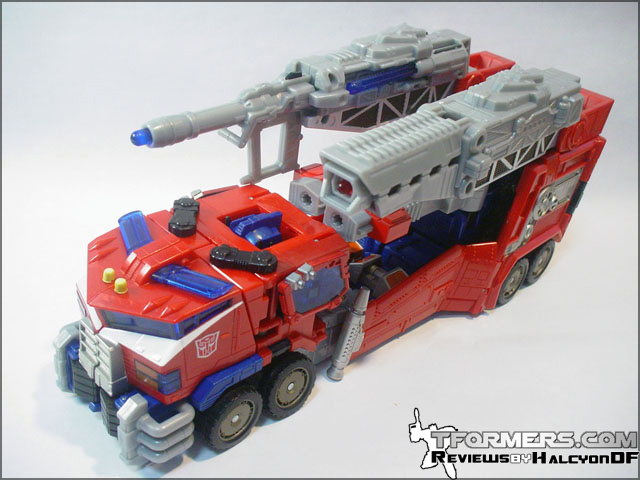 What hints at it being a fire engine is the silver detail (shaped rather like the trailer motif on G1 Convoy, below) sculpted like a hose system at the rear on both sides of Convoy, the white ladder motifs on his 2 cannons and light/sirens on the top of the cab. In the show, those two inner guns in the center are actually water cannons, but it is to hard tell from the toy itself. However, this is not your average Earth fire engine. Galaxy Convoy has a very tough rugged look that Earthâ€™s fire trucks do not carry. His bumper (fists and wrist in robot mode) is huge and comes equipped with 3 bumper â€˜grillsâ€™ on each side that looks like they can take some serious knocking. Those 2 â€˜laddersâ€™ are used to house a huge cannon each. The windshield windows are slanted and angled upwards, making Galaxy Convoy look like some sort of armored vehicle. 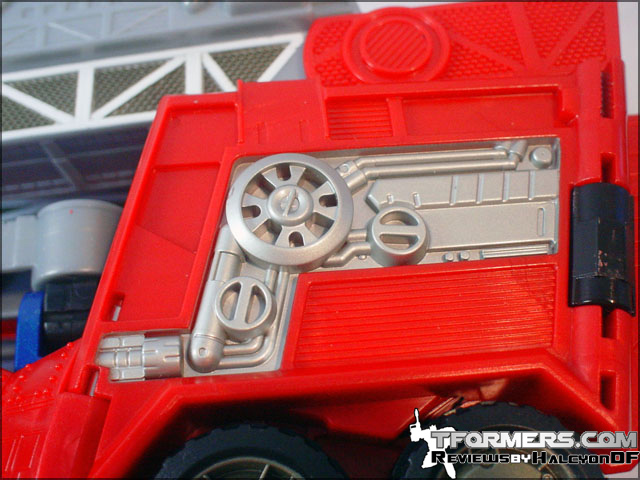 Declaring his allegiance, there is a Cybertron logo in red on white background on each of his side doors. The wheels are matte plastic and in black with dark gold hubcaps. Four wheels are visible on both sides, with a pair hidden behind the second last pair of wheels. The colors go together very well on him. Most of him is in red and gray/silver and then some blue being hidden and hinted at. What is disappointing is that in the publicity shots, the dull gray parts which are his thighs, bumper and cannons were silver. He would have looked better if those were indeed silver. 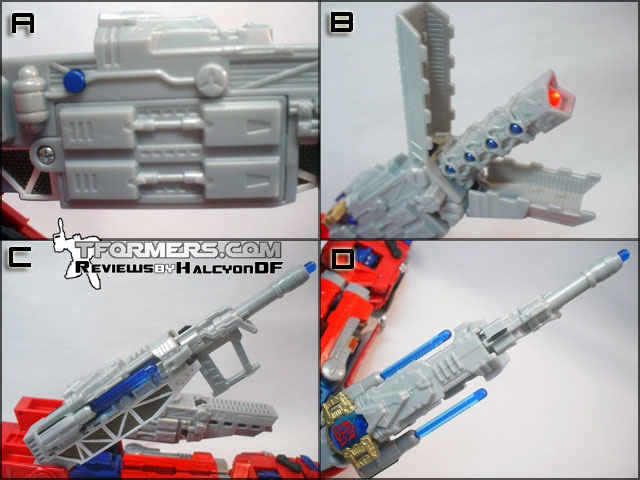 On to the main armaments, those two cannons are very well sculpted with very intricate details, even the battery cover(above, A) is worked into the overall scheme and would not look like one if it wasnâ€™t for the giveaway screw. The left cannon also house his blaster as an extension(above, C) when in vehicle form. When the Force Chip is inserted into the left cannon(above, D), two missile launchers unlock from each side downwards, giving the left cannon 3 missiles (3rd one on blaster) to fire! On the right cannon(above, B), the force chip opens up the core cannon; the red led at the tip flashes and an opening sound is heard. While the Force Chip is loaded, pressing the blue button at the side results in a â€˜chargingâ€™ and then a firing sound. If the Force Chip is not inserted, a series of rapid fire is heard by pressing the blue button. The Force Chip itself is an interesting item and is unique to all the other force chips released with other figures. Perhaps this is due to Galaxy Convoyâ€™s status as the Cybertron leader. The chip is transparent blue with an embossed Cybertron faction symbol in red. The edge is painted gold and carved to look like the matrix. 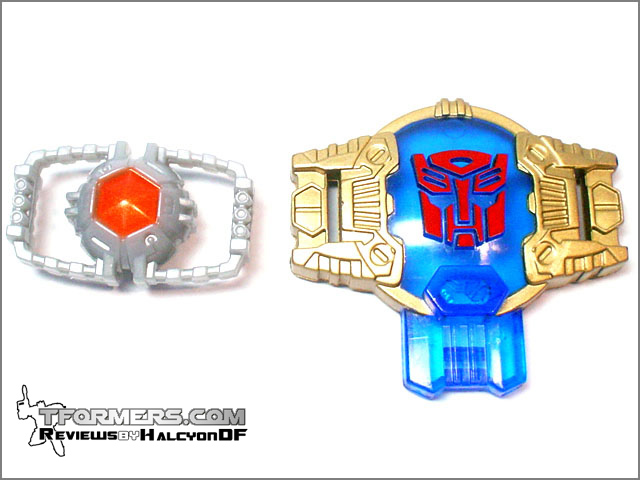 Galaxy Convoy has many movable parts while in vehicle mode, increasing his play value. The 2 big cannons move up-down through 100 degrees and rotate almost 360 degrees, only being blocked by one another. The 2 center water cannons have rather limited, but reasonable, motion range. If you move the wings at the sides outward slightly, you will get the silver tips to rest on the surface, looking like stabilizers preparing for recoil after the 2 cannons fire. 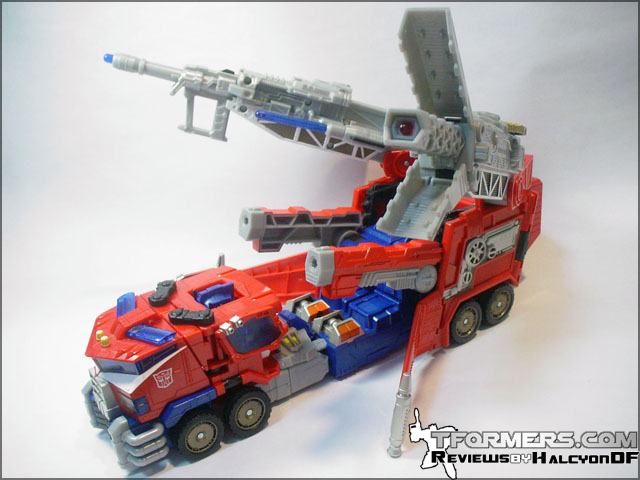 Flight Mode
Lower the center cannons to the sides; rotate the rear flap with the cannons out and fold them down to get Convoy into his flight mode. This mode is official and is even used by Galaxy Convoy in the show to fight airborne Destrons frequently. This is a nicely designed mode, with the wings looking good and each cannon pointing forward, becoming one with the wing they are on. Also, the wings are detailed to look like actual wings of the plane. The hidden rear pair of wheels now takes over rolling from the trailerâ€™s rear wheels since the rear wheels are now laying at the back of the wing. I really like this mode, except for the front of the vehicle. I wished they had done something to make the cab front more aerodynamic-looking. Trucks are not designed to fly through air, yet here we have a plane that has a truck for its nosecone. 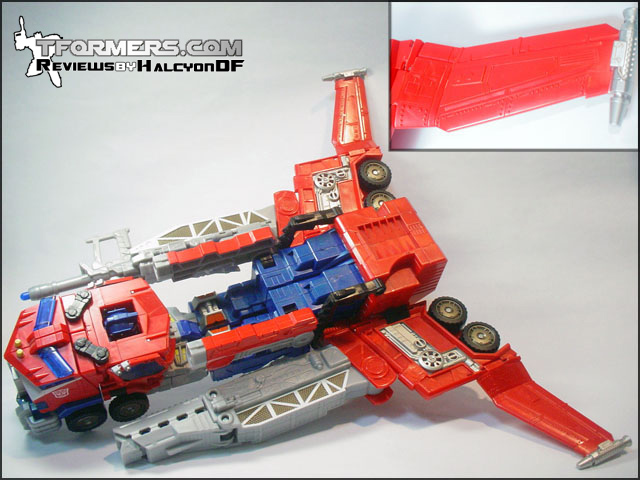 Verdict: 10/10 Takara has given Convoy a very nice vehicle mode this time around, with much play value â€“ in both vehicle and flight mode - and detail in his alternate mode. He pays homage to previous Convoys in the form of his colors and overall design, but Galaxy Convoy has enough of his own â€˜characterâ€™ to be his own man â€“ or Convoy.