Alternate Mode
Megatron, the eternal arch nemesis of Convoy, returns to Galaxy Force in the form of Master Megatron. While Convoy always almost appear as a truck or something similar, many different forms have been used for Megatron. Tanks and jets are rather common but his new alternate mode in Galaxy Force is quite distant from those – Master Megatron returns as a cybertronian high-speed racing vehicle.
In this mode, Master Megatron has a rather streamlined body. Each part housing the wheels is also streamlined, giving Master Megatron a very Batmobile feel to him, as felt by many throughout the online community after seeing his publicity shots. Indeed it does look like a outlandish Batmobile but the colors are more of what the Joker would have chosen instead of the Dark Knight. He is mainly purple, white and orange in the front while the rear is primarily colored in black and gray. 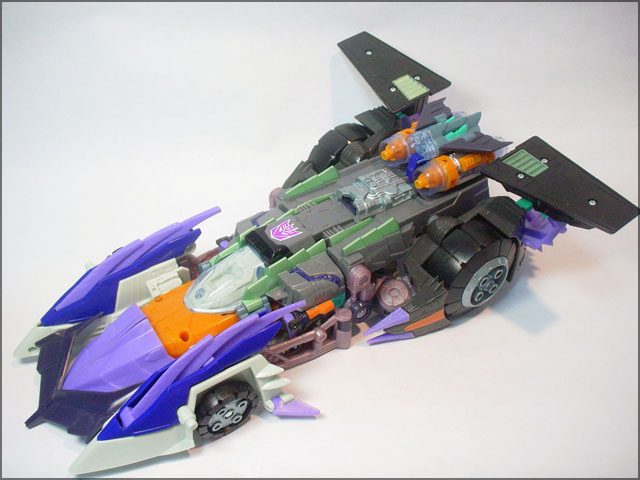 With the 3 back-pointing spikes on top of each front wheel, the front bumper blade and the purple segmented section after it, Master Megatron is one mean looking racer. Towards the back, things get big with the oversized spoilers and huge tires. In the center of the spoilers lays two rocket engines that pop up when the force chip is inserted. When they do pop up, the central orange piece in the rocket engine is set spinning. The force chip is also very unique, a counter-piece to Galaxy Convoy's own Force Chip. It is transparent with gray edges and in the center is an embossed purple Destron faction symbol. The Force Chip itself looks like a simplified version of the Destron faction symbol but with stylized wings much like those of a general's badge. I take this as Master Megatron declaring himself as General of the Destron Forces. 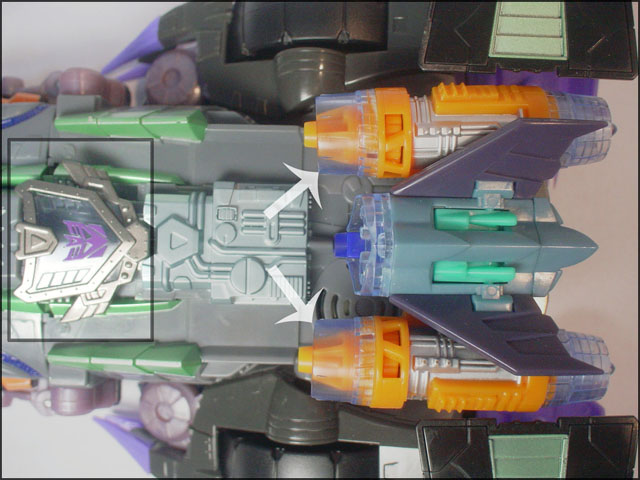 Right in the center of Master Megatron just above his cockpit is an embossed Destron faction symbol in purple on white background which is an excellent touch. Surrounding this symbol are a couple of ridges in metallic light green that resemble a crocodile's back. This definitely adds to his mean-looking factor. The vents on his spoiler are also painted this green. The vents, however, looks like an attempt to detract from an otherwise plain looking pair of black spoilers. Since these later become his feet, they have to be flush and thus void from most décor. One major flaw with Master Megatron in his alternate mode would have to be right under his spoiler. The rubber shin guard that covers the span of his lower leg is just left hanging there. It is not a very nice sight and would certainly benefit from some better engineering. 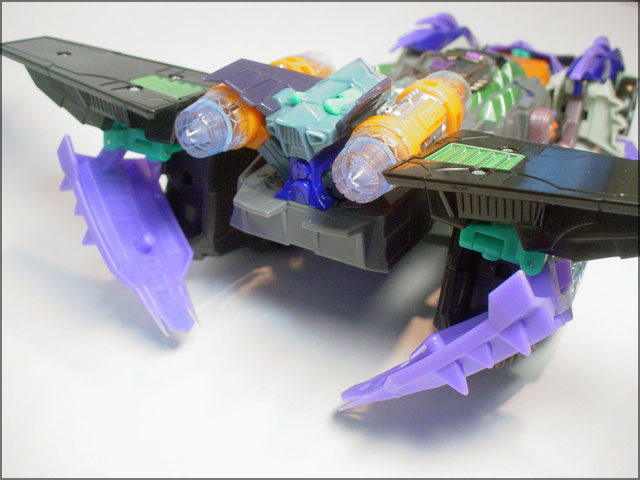 Another would be a manufacturing defect, which I hope is not affecting the whole batch of Master Megatrons. The front purple segmented section behind the bumper cannot close fully even if lined up completely. The rubber is somehow, a bit warped and do not come together. It is sad that such a fault occurs at such a prominent section. It would have definitely not have happened if it was plastic. 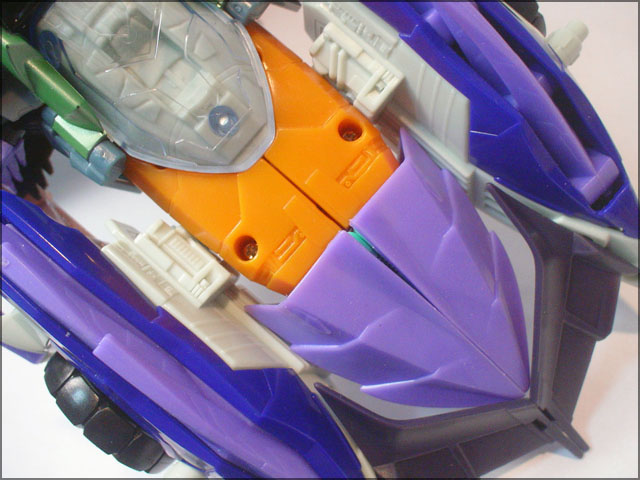 Jet Mode
Master Megatron, similar to Galaxy Convoy, has a flight mode too. This time, he looks like a jet but on closer inspection reveals otherwise. He looks exactly like his car mode but has the front wheel housings moved to the rear. That whole portion is supposed to be his wing section, with the bumper blade halves acting as little fins. Once again, it does not look too aerodynamic. I would have preferred a more complex transformation to give him a better jet look. 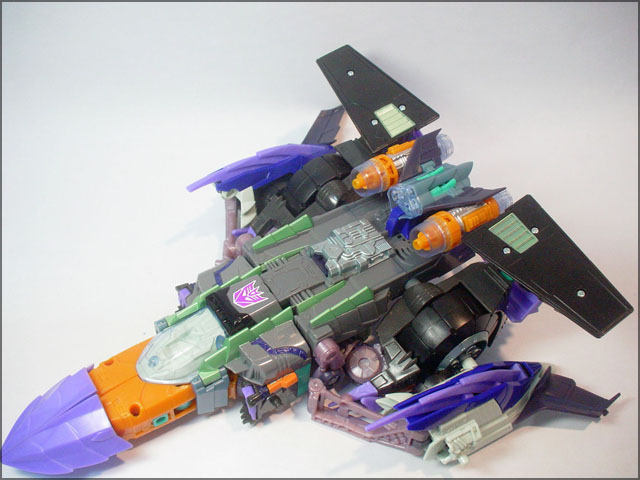 Verdict: 8/10 Excellent mold for his car mode, attached with some flaws. Jet mode is appreciated but not to a great extent.

Robot Mode
Transforming from either car or jet mode, Master Megatron becomes a huge robot towering at 10 inches. Master Megatron’s hands are orange and look like they come straight off Armada Unicron. In fact, the shoulders look as if they were updated copies of Unicorn’s shoulders. Primarily because the arms are in orange and are the most abundant in references/homage to Unicron, the arms look slightly out of place with the rest of the body. As of this writing, no mention has been made in the Galaxy Force show about the supposed merging of Unicron with Galvatron in Superlink, but I believe there is sufficient evidence on this figure, especially on his arms, to show this is true. One feature perhaps carried over from Unicron would have to be the articulation on his arms. Besides the usually shoulder and wrist rotation joints, there is a rotation joint just below his shoulder and a double joint for his shoulders. The range of poses he can achieve with his upper body is truly spectacular. 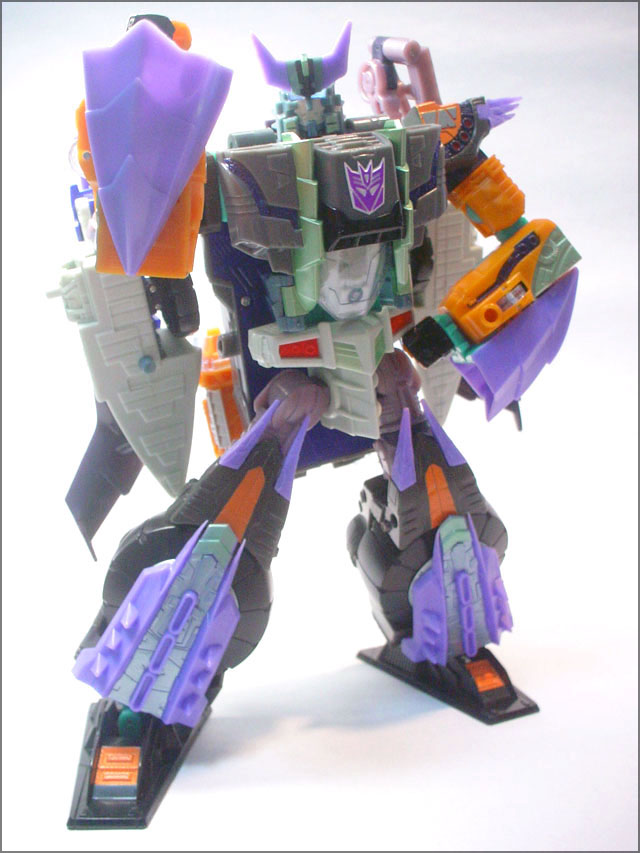 Master Megatron also has one of the nicest Megatron heads in my opinion. Unlink Super Link’s Megatron/Galvatron, whose head was almost a direct copy of G1 Galvatron, this time round, the head sculpt is rather original. I would not have guessed this is a Megatron if I was shown only the head. On top of his forehead is a pair of rubber purple horns that stowaway in his alternate modes. I do not really like the rubber material, but the color isn’t that bad for the head and the ridges lines are also seen on his horns much like on the show. His face is painted white, except for his nose. His nose is white in the show, I do not really understand the need for a blue nose. Most likely, this is a design error on Takara’s part. Master Megatron’s eyes are transparent light blue to allow light to pass through. I would have preferred a shade of red, or orange like Thundercracker. It would have made him look oh so much more evil. 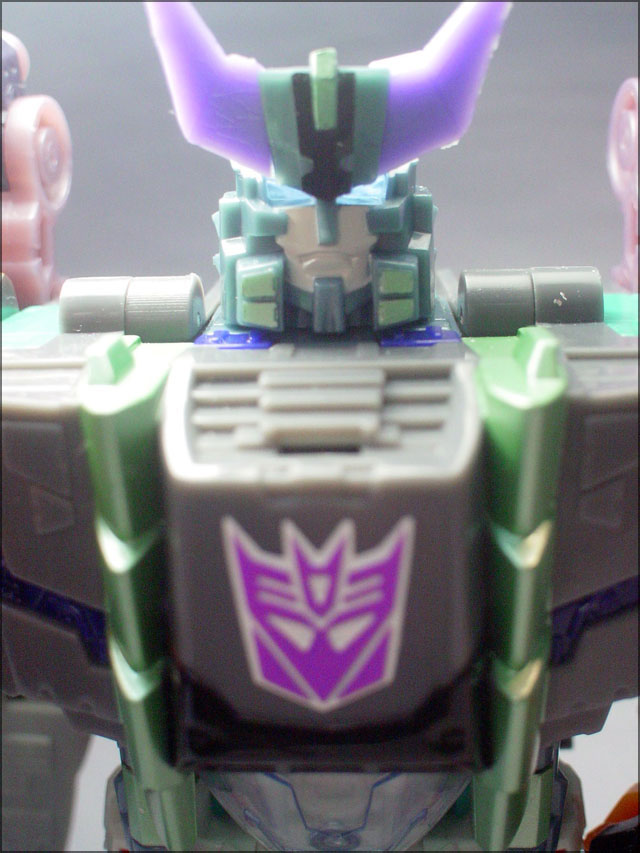 Below on his chest is the same embossed purple Destron faction symbol on white background from the center of his vehicle mode. I love the way it looks on Master Megatron’s chest. Coupled with a well designed upper torso, Master Megatron looks good from the waist up – so far. If you would to look from the side of his chest, you would see a void much like Dreadrock’s body. Although in Master Megatron’s case, it is not that bad and is only visible when his arms are up. A bigger problem would be the shoulder hinges that attaches to the back of his torso. This comes off pretty easily and would not really hold during rougher play. I had to remember to avoid touching his front torso while posing to make sure the hinges stay on.

Due to the fact that a large part of his vehicle mode rest on his back much like a backpack, his waist has a limited range of motion. Also, something interesting to note is that during his transformation, the waist is supposed to swing all the way around but it locks up half way through, perhaps a sign of future combination possibilities much like the black locking holes covered by his rubber armguard.
On to his legs, his legs are rather bulky due to the oversized rear wheels each becoming a large part of each leg. The design on the shin guard and knee guard is rather unique and has a mean look to them. Articulated at the knee and the hip, Master Megatron has great posability once again for the upper portion of his legs. However, the feet are the one thing that dampens it all. They are flat and big and make it seems as though Master Megatron is wearing snowshoes. The ankle joints are weak and wobbly also. They make Master Megatron lean back or forward while posing, greatly reducing the amount of stable and more dynamic poses he can achieve. This is definitely a huge minus point for Master Megatron.
His Force Chip unlocks two more features in his robot mode. On the left side of his back, the force chip separates the upper purple portion and it becomes a 3 spike melee weapon. The right side has another Ignition slot. This time it unlocks the same purple portion but instead of popping off, it swings open, revealing a rail gun, with the wheel as the front portion of the gun. The purple portion that swings up does not really lock well. A slight tap to the side is all that is need to open it. This is definitely a case of poor engineering. 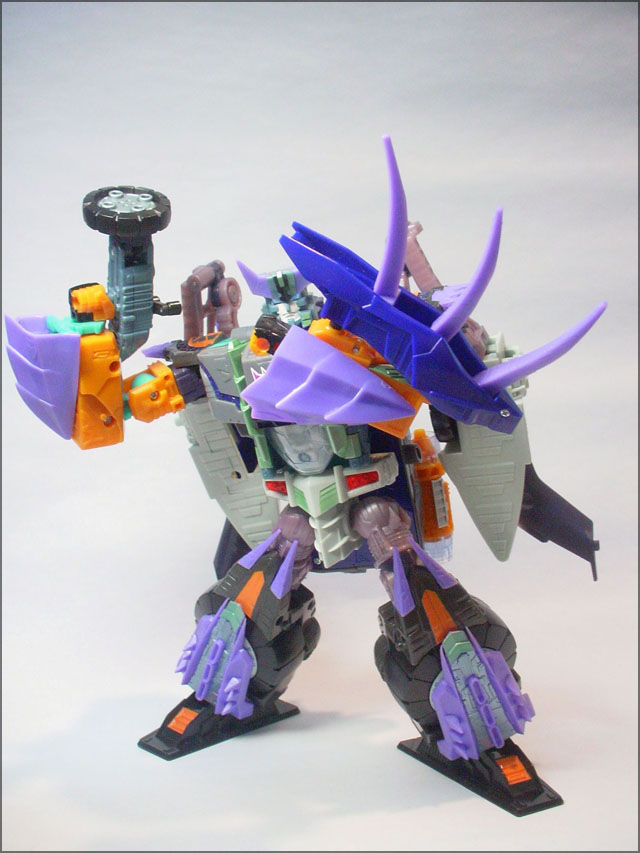 Both weapons can be held in Master Megatron’s hands or attached to the sides of his arms. The melee weapon is rather cool looking when attached to the side. The same cannot be said of his gun in either attachment. It does not look powerful nor does it look evil. In fact, it looks like a cybertronian hair dryer. A gear system allows the front wheel panel to turn when the little handle at the back rotates making it look like a rail gun. This however, fails to save the gun from becoming one of the most absurd weapons ever made for a Transformer. Personally, I think he looks better without the gun.

Verdict: 9/10 Great figure that has superb arm and upper leg articulation. Feet and his weapon would be his downfall.

Overall, this figure is definitely worth it, having a great looking robot mode and car mode. The jet mode, feet and gun are quite disappointing and saddening for Master Megatron. However, if like Armada and Energon, Megatron gets repainted into Galvatron, I would suggest holding on to your money for the Galvatron repaint. The Galvatron color set tends to be nicer most of the time. A Galvatron figure is reportedly on its way in the Galaxy Force Line up but it is unknown if it will be a repaint. This toy is worth getting – but not worth getting twice.