The 11th in line for the Binaltech series is none other than Ravage, an all-time fan-favourite character. From a cassette to a jaguar; Ravage now transforms from a black open-top convertible Chevrolet Corvette to a humanoid Robot. Throughout this review, I will compare him with Blue Tracks, as this is the only Tracks I have. I did not get the yellow one as both Tracks was out when I got into collecting Binaltech. 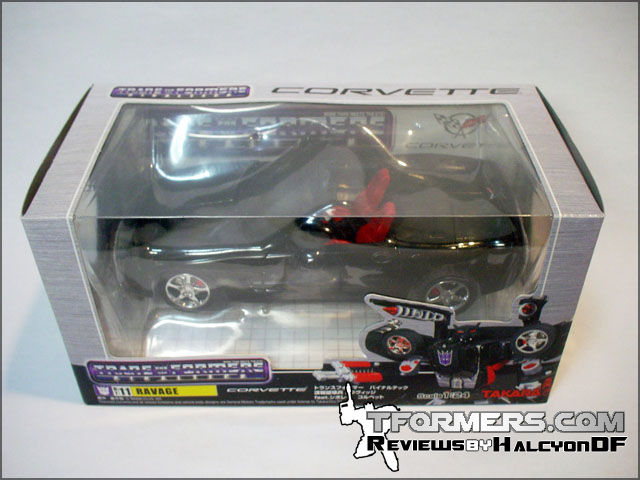 The packaging is the same standard Binaltech packaging; in other words, good packaging. The box opens up to reveals a beautifully detailed purple flap with a circular window. Proceed to lift that flap and Ravage is almost freed from his cage. The plastic packing opens up diagonally after the twist tie is removed; and in your hands would be the BT-11 â€“ Ravage! 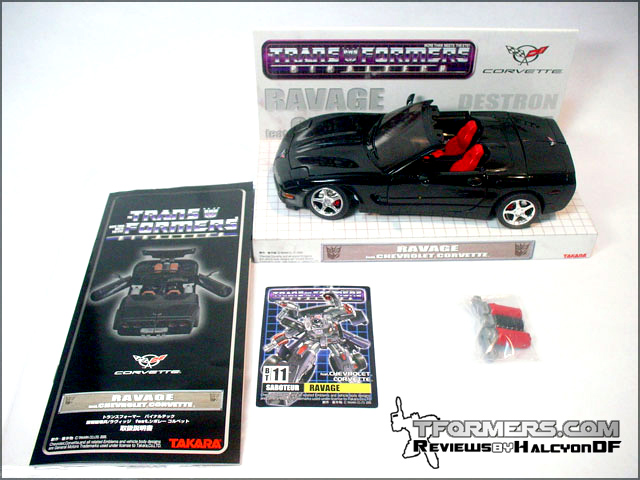 Ravage comes with a white cardboard display platform that is meant for his car mode. On the left of the backing is the 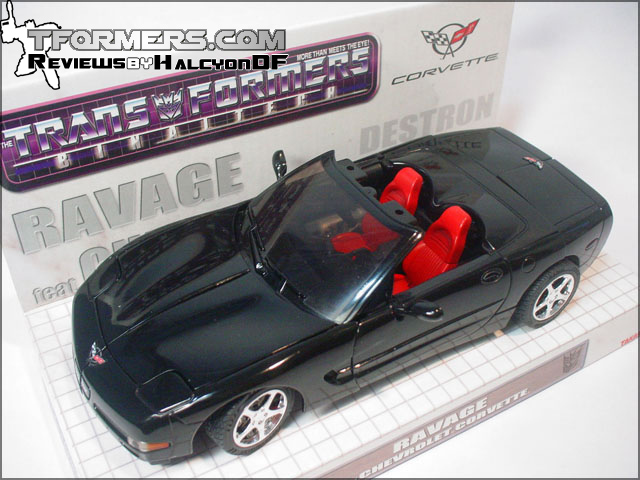 Vehicle mode
Ravage has a really nice car mode with some great detail. An embossed Corvette logo can be found on both ends of the car. Headlights and rear lights are all dark orange (2nd picture below, A). Ravage features the trademark rubber tires that have the words â€™cybertronian radialâ€˜ around it. The windscreen is tinted black to match to all-black body of Ravage. Blue Tracks also has this tinted windows, it is only yellow Tracks that have 100% clear windows. Interestingly, Ravage has a very deep rich gloss to his black paint, even beyond that of his fellow black Destron, Dead End. Perhaps Takara has improved their paint technique and we will all be getting extremely shiny Binaltech from now on! 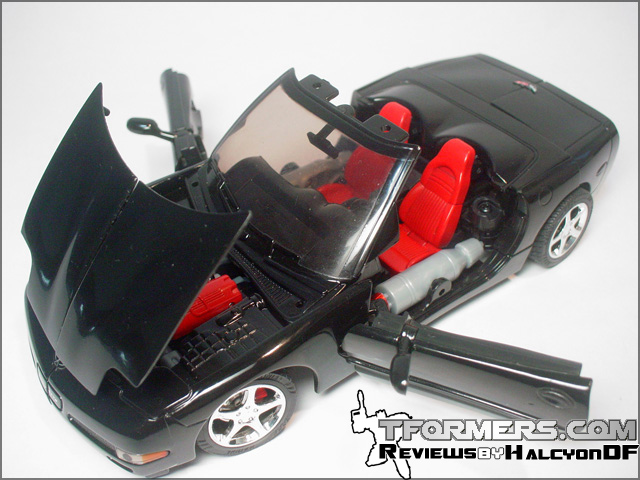 Like a real Die-cast model car, the doors and the hood can be opened. Underneath the hood, the engine/gun part (below, A) can be attached to Ravage like a real engine which is a pretty good replica of the original engine. There are also some nicely sculpted details besides the main engine block to look like the other parts of the engine. The doors open to reveal missiles at the side of the seats. Of course, this was never planned for and is a result of the transformation sequence, but I have never liked the fact the Tracks mold had 2 missiles sitting side by side with the seats. I would not want to ride a car with a missile right by my side! Now that Ravage is a convertible, this becomes slightly more noticeably. The red seats, however, is nicely sculpted. The two side mirrors each have a silver surface that is made to look like mirrors. They can not really reflect any thing far away, but if you would hold up something like Ravageâ€™s engine/gun part near it, the reflection is rather clear. It is indeed a nice addition to detail.

The inner sides of the doors (above, B) are also nicely modeled, save for the two screws. The license plate (above, C) has a Destron logo on it and the 3 characters â€˜RVGâ€™. The underneath of Ravage, although revealing some robot parts, has some realism to it, including a center pipe piece and the tailpipes and of course, the usual steering mechanism of the front wheels. The dashboard and glove compartment is also sculpted nicely. The steering wheel does not work, but it can still be rotated (see below). Those two flaps at the top of the windscreen are left over from the Track mold. Some convertibles have the fold-down mirrors left on the windscreen while unroofed so it really is not that big a problem. A bigger flaw would be that they left the holes required to hold down the roof in Tracks there. They should have filled it in. It should not be too hard. 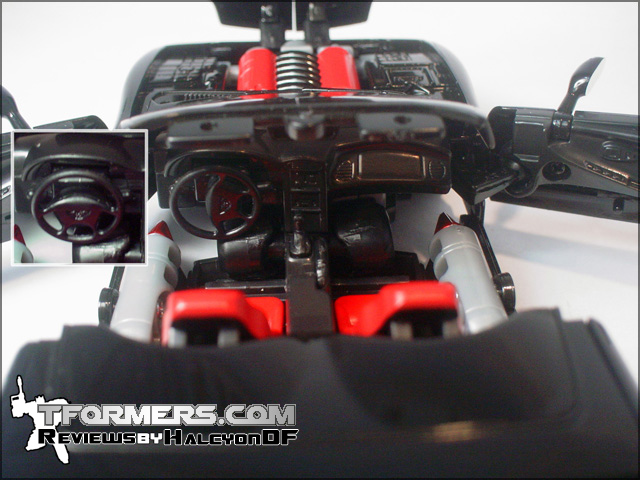 Below are two comparison shots with Tracks from the front and the side: 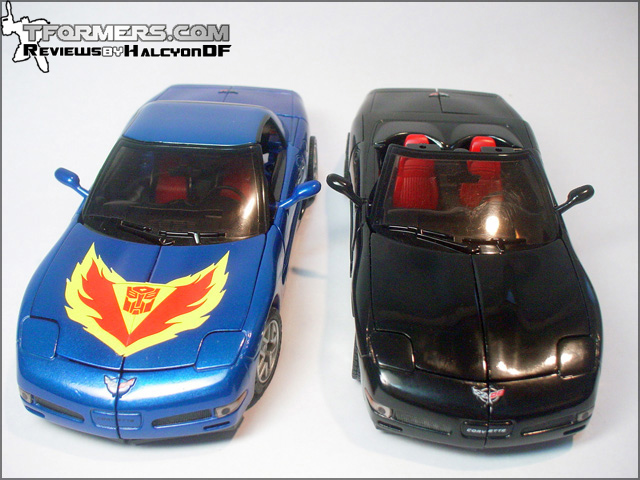 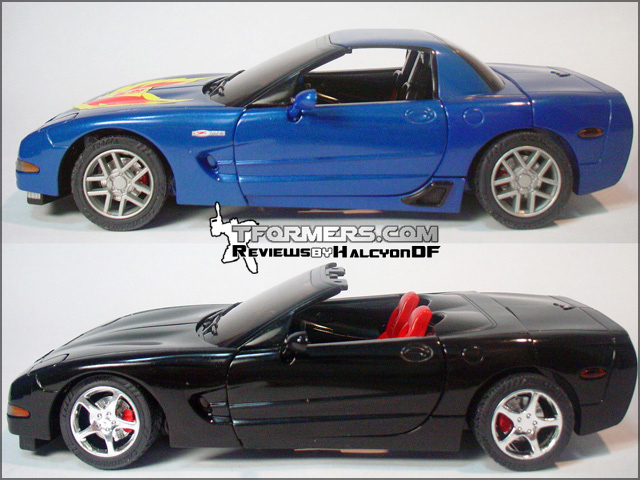 Besides the obvious changes from coupe to convertible, the hub caps are different in shape and shinier too. The brake calipers are painted bright red on Ravage. Also, the vent at the side of the door on tracks is missing on Ravage.

All in all, Ravage is really nice as a car! One of my fears of the Tracks mold was that the lines down the hood and the boot. I feared that they would not hold together or would be flimsy. However, none of that is true, not even one bit.
Verdict: 9/10 Great car that no one would believe is a Transformer unless being told (or after seeing the missiles by the seats.)