Alternate Mode
Skids is a 2-seater convertible while hiding in his alternate form. Primary off-white, Skids is also decorated with orange, sky blue, some silver and a little black. The colors are good, not exceptionally nice, but rather just average. The paint application is okay for Skids, except for the silver motif on the hood of the vehicle. The one on my Skids does not have a clean edge and looks like it was sprayed on rather hastily. I have compared my Skids with others on sale and it seems like quality control did not do their job well this time round. There are Skids with worse paint job on the silver motif and some rather clean-cut ones too. 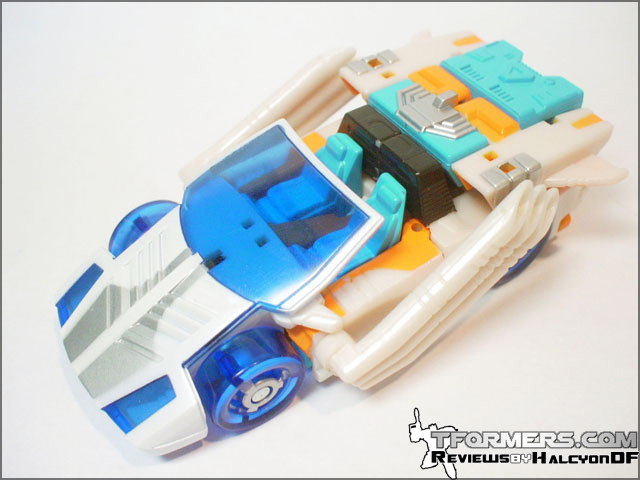 The front of Skids is flush with his windscreen, which is tinted blue. The wheels are this material too, looking like crystal wheels, like all other Speedia inhabitants released so far. The transparent blue headlights are also a nice addition to detail. Speaking of detail, the interior of Skids includes 2 seats which are nicely sculpted much like real seats with those ridge lines. There is also a steering wheel sculpted in relief at the left seat!
Despite being a small size figure, Skids has quite a high play value while as a car. Two side-pipes can be attached to and removed from Skids, looking much like G1 Hot Rod’s pipes. The back Force Chip block can be removed too. Here is a shot of Skids removing all the attachable: 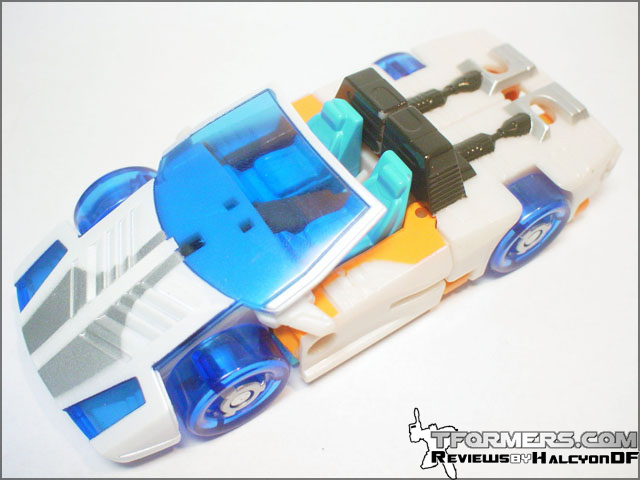 When Skids is ‘ignited’, the sides of the back block rise up and come together in the center. The fins that used to be at the sides are now at the top now. It does look pretty cool. Do note the gun barrels hidden previously underneath do not come out when the force chip is slotted in. They have to be protracted manually. This means that they can be left exposed while the sides are down too, which do not look too bad at all. 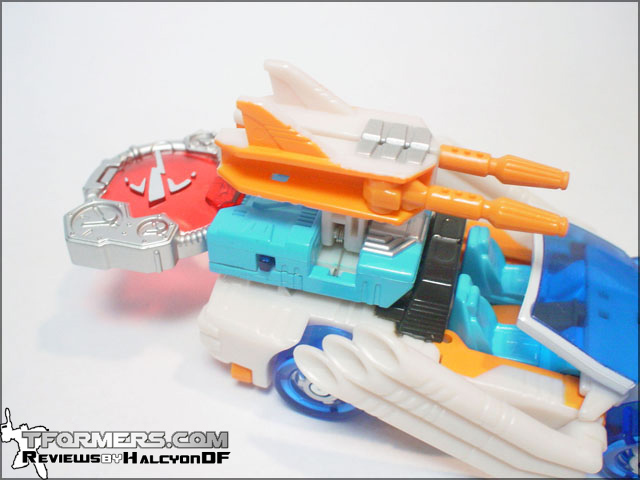 Verdict 7/10 Skids has a well designed alternate mode but which could used a nicer color scheme and better quality control.

Robot Mode
Some metallic maroon is revealed on the chest and the forehead when Skids is transformed. Maroon is an interesting choice for Skids with his color scheme, but goes down well. The hood of the car hangs on his back much like a backpack and besides that and the wheels on his legs, not much car parts are visible in robot mode. Skids upper body is shaped quite like a well toned mechanical muscular body with a ‘V’-shaped chest and pipes as his midsection abdominals. 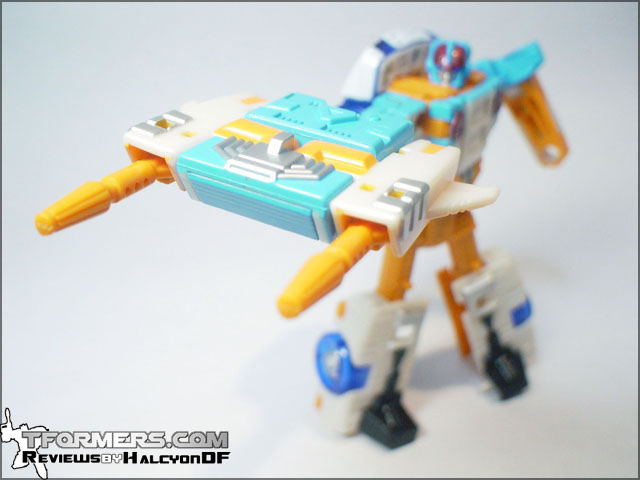 Skids is also well articulated, with a rotation joint at the waist, ball hip joints, ball shoulder joints and hinges for elbows and knees. Skids is pretty much poseable as long as you take into consideration he leans very slightly to the back due to the hood at the back. His shoulders can also be hard to position as they are square and tend to default to either a top or bottom configuration. The fact that his elbows use hinges does hurt some of the more natural poses I would like Skids to be able to have. While looking at the side of his legs from the center, they look weak and empty due to the big void in them. This is unavoidable due to do his transformation, but rather unsightly in some poses. 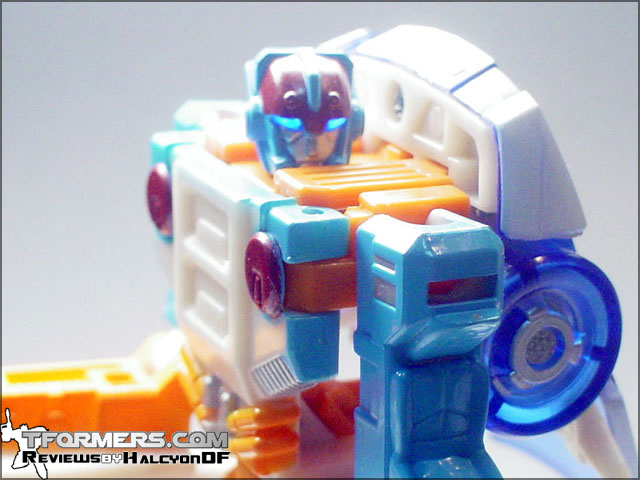 Skids eyes are transparent blue allowing for piping effect (below). Those blue glowing eyes look real good! However, from some angles like the sides, his eyes look like they are too high up on the face. This does not really matter, as it does not affect anything. Also, his face sculpt reminds me of Energon/Superlink Hot Shot’s head.

Skids has 3 weapons in robot mode, the main one being the main block off his back as a car. Skids is able to hold it in both its ‘ignited’ and ’un-ignited’ modes. He can hold his exhaust pipes like guns or as a close combat weapon. Below are some combination possibilities out of a wide range: 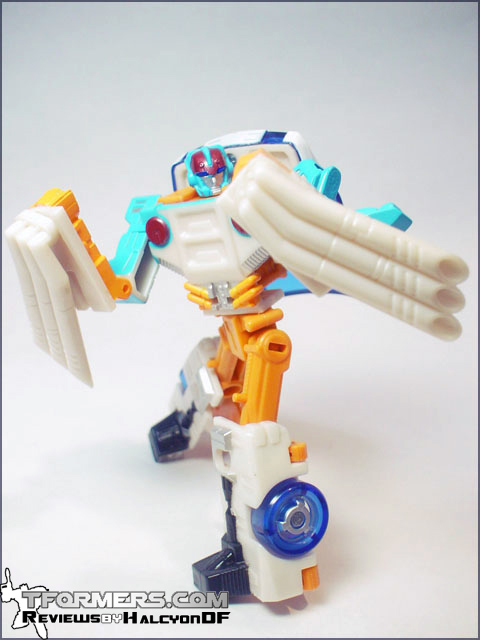 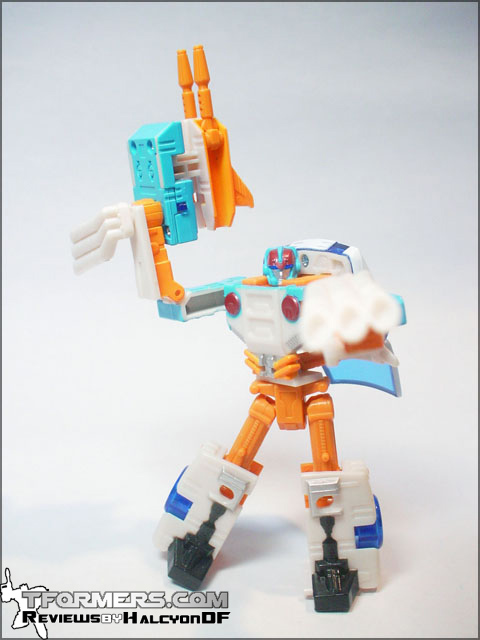 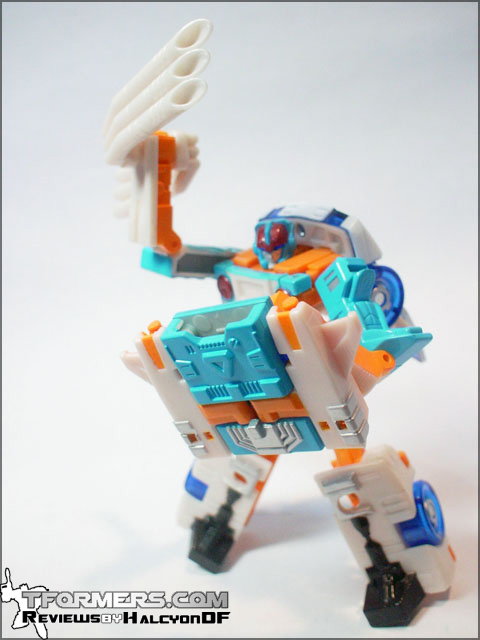 There are probably more combinations possible, but I have decided to show only these 3.

Verdict 9/10 Skids is excellent for a basic Transformer! He has somewhat good posability but great play value with his weapons.

Despite his unexciting and common-looking color scheme, Skids as a basic Transformer figure is very enjoyable due to his high play value. Almost a must-get.