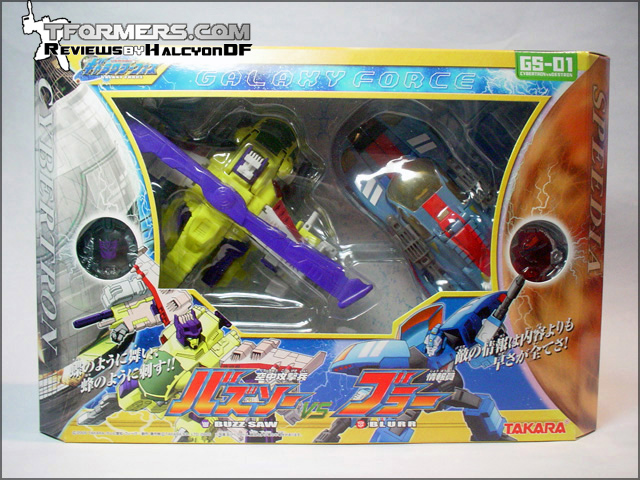 This versus set pits Destron Buzz Saw vs. Cybertron Blurr. Both Figures are from Micron Legend/Armada and have been significantly retooled and repainted to resemble to a certain extent their namesake. Blurr is retooled from Blurr (A) / Silverbolt (ML) and Buzz Saw from Cyclonus (A) / Sandstorm (ML). Both are deluxe sized figures being sold together at the ultra price point. A theme runs through both Vs Set GS-01 and GS-02 and the theme for this set would be â€˜dual missilesâ€™. 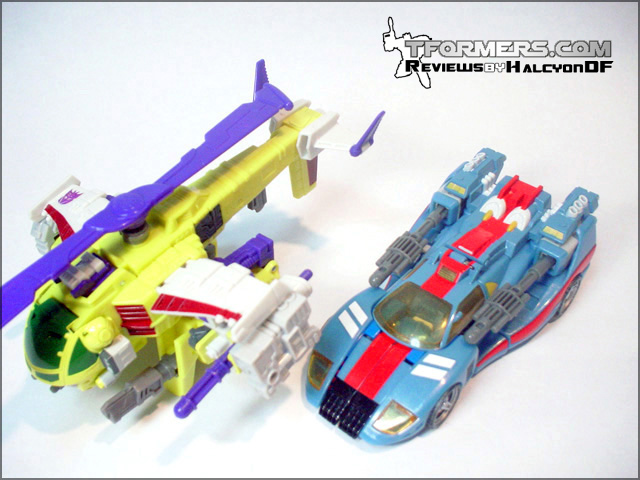 Alternate Mode
Buzz Saw is a bright yellow helicopter with white wings and fins and then some purple, maroon and gray. The windshield is painted dark green. There is quite some sculpted detail along the main body and the supposed landing gear but these are not brought out with any color and hence Buzz Saw ends up looking rather blocky. Buzz Sawâ€™s Destron faction symbol is painted prominently on his right wing. 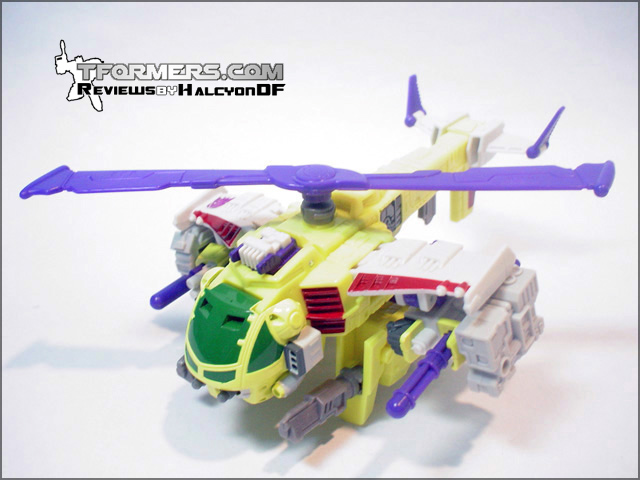 The landing gears are not attached to anything neither are they locked in place while Buzz Saw is in vehicle form. They move around a bit if one were to fiddle with Buzz Saw but the good thing is they are not loose. 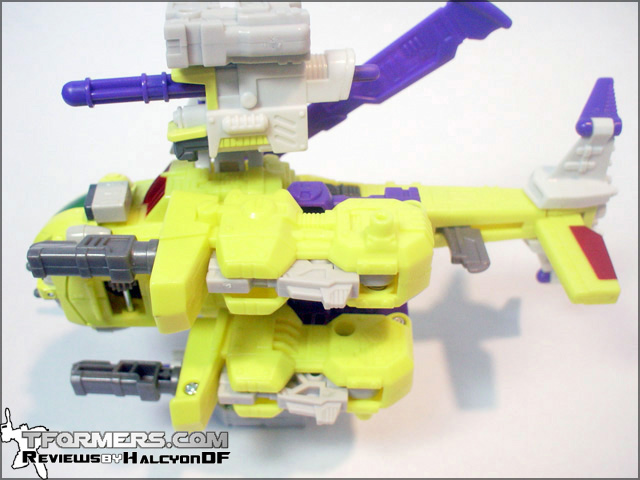 Personally, I would have appreciated a choice of a darker golden yellow or a paler yellow instead of this bright yellow, which I feel does not go well with the rest of the colors. I am not a big fan of the Armada/Micron Legend line and do not like this mold and despite being an improvement, feels it is still not good enough. However, one must still give credit for the extensive repainting and retooling which Takara did to make this a better-looking toy. The front of the helicopter has been replaced with a rounder dome front. His arms also fold differently from his previous mode. The colors have been chosen to look like the Beast Wars Buzz Saw. 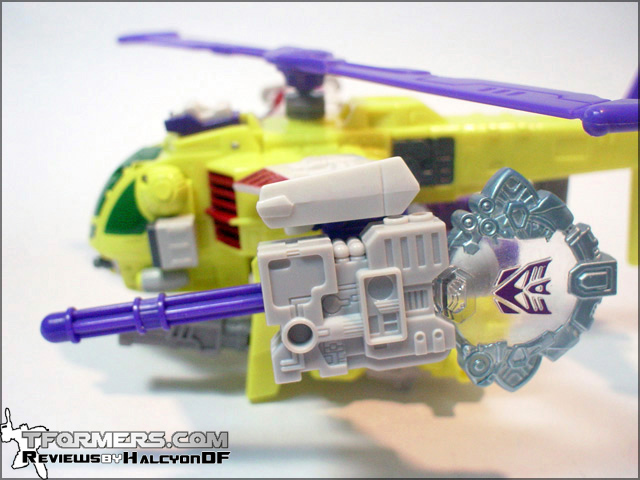 Despite the lack of aesthetic appeal, Buzz Saw has great play value. Insert the Force Chip at the side of the missiles and they will fire. Also, there is a gray fin on the tail which acts as a trigger when u pull it back. Hold Buzz Saw like a gun and pull back on that trigger and his blade rotates. The front guns under the windscreen also move when the trigger is pulled back, but it must be pulled rather fast for the guns to move. 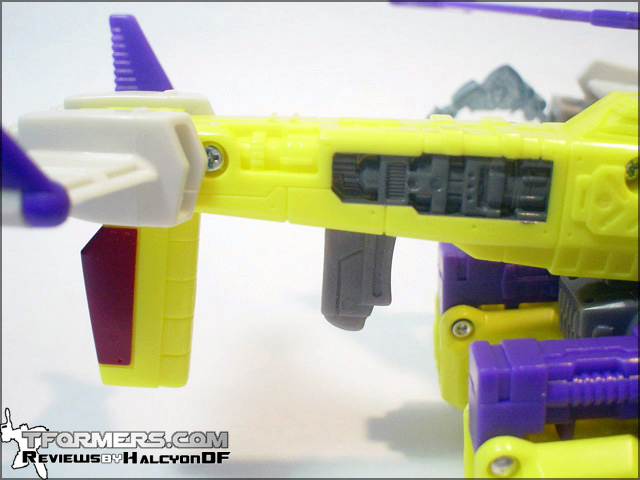 Verdict: 6/10 Average with high play value; yet not very appealing colors and form.

Robot Mode
Buzz Sawâ€™s head has been remolded to look like Beast Warâ€™s Buzz Saw. With that green â€˜domeâ€™ chest, he does like his BW namesake. Color-wise, the same scheme is carried over from his vehicle form. His Force Chip-igniting missiles gimmick remains the same and are on the sides of his hands. Talking about his hands, they do not feature any weapon peg-holes, so Buzz Saw only has his two missiles launcher as his mainstay weapons. 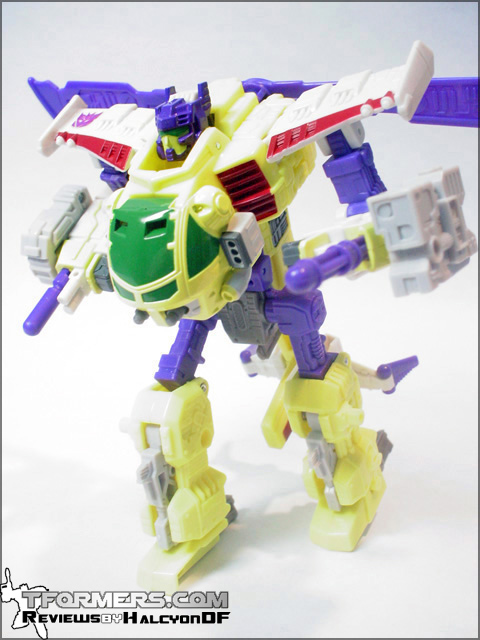 His arms are too far apart and his hips quite low. Coupled with a heavy top, Buzz Sawâ€™s robot mode is not exactly a very well designed one. Buzz Saw also does not do well in the posability section as his joints are mostly rotational in nature. His knee joints are also non-existent or feel so and are there only due to his transformation. Bend his leg too much and it results in a void at the top of his knee which does not look good.

The tail folds down in robot mode and does block his legs from moving backwards. Together with being top heavy, Buzz Saw is hard to pose. 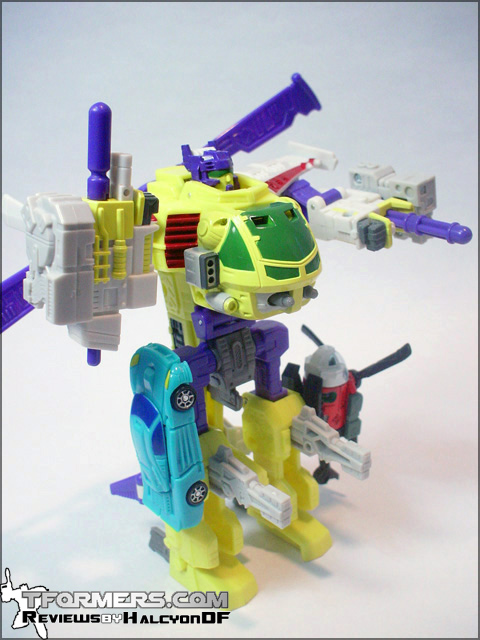 One thing that is carried over from the previous release of this mold is his micron ports that can be attached with microns. In the previous release, these ports activates the gun along his leg; unlocking them to a horizontal position. For Buzz Saw, press the guns together towards the center and they pop out.

Verdict: 4/10 Poor looking robot with a great lack of posability.

Alternate Mode
Blurr is now a blue car with 3 red stripes running lengthwise in his vehicle mode. His windows and headlights are transparent yellow. Both the yellow and blue are infused with metallic sparkles that seem to give Blurr that extra shine. His wheels are also transparent; a feature that is native to Speedia inhabitants, but it seems his wheels appear to be rather matte than shiny. Blurr has a sleek front that widens to a larger rear. His rear comes equipped with two missiles. 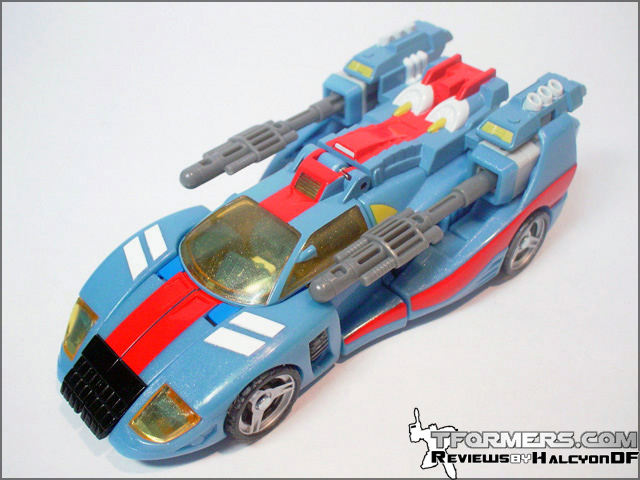 His Force Chip unlocks the sides of the car, giving Blurr his â€˜flight modeâ€™. His wheels now look like rotors and his missiles are at the wing tips. The top of the rear also look like tail fins. 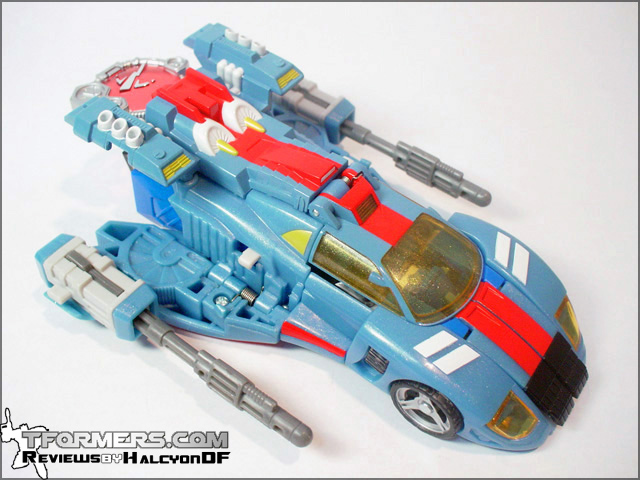 Besides the new paint job that resembles Exillion, the two micron ports have been removed and retooled with the top of the rear end to look like an engine that has 3 exhaust pipes running out from each side. Compared to his previous release in ML/Armada, I would consider his vehicle mode in Galaxy Force a much appreciated upgrade. 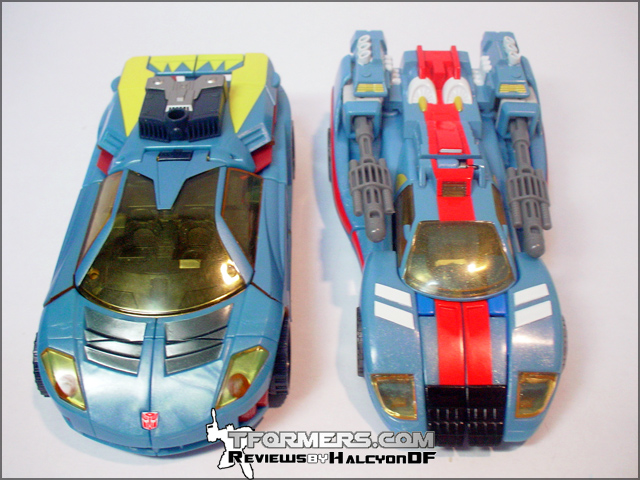 Robot Mode
Blurrâ€™s head has been replaced with one that resembles G1 Blurr and his colors replaced to match closely with that of G1 Blurr too. Some of the blue in the car mode can be seen in his robot mode but a more intense shade of blue has take over as the main color. A red Cybertron logo on white background is featured prominently on his chest. 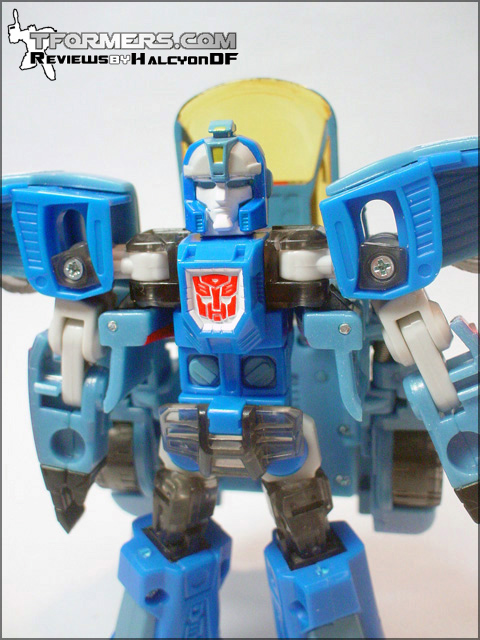 Blurr has a rather scrawny body that makes his head looks big. His arms and legs are also rather limited in posability, forfeiting a large range of poses. His hands also seem to be caught in a perpetual â€˜karate chopâ€™ pose which only allows him to use his missiles launchers as weapons and no one elseâ€™s. The lack of a knee joint is replaced by a ball joint and swivel joint at the hip that allows him to spread his legs or rotate them and that is about it to his poses. 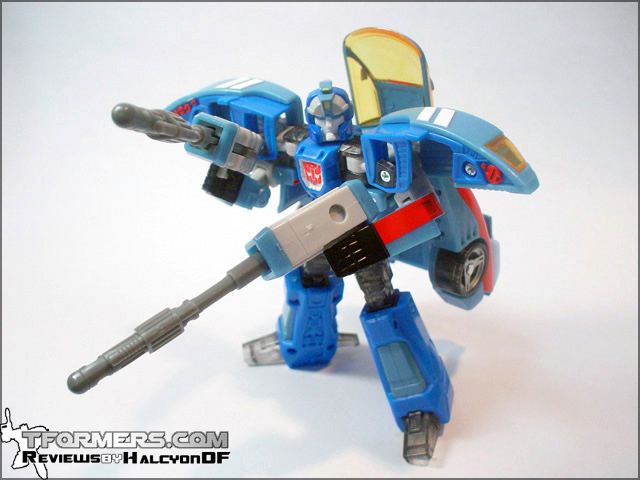 Even though the windscreen hanging at the back of his head looks good, the rest of the car hanging off the back is not. It also cause him to tip over backwards.

Verdict: 4/10 Nice colors but tiny torso and lack of articulation spoils all.

I would say that we all know that Micron Legend/Armada were not too well received in general. What I can surmise is that Takara has done the best improvements possible (but still not good enough) to these molds and retooled them to pay homage to previous series so as to recur some of the losses with these molds. Oddly enough, they have chosen a G1 homage (Blurr, Runabout) versus a BW (Buzz Saw, Longrack) homage for both sets. 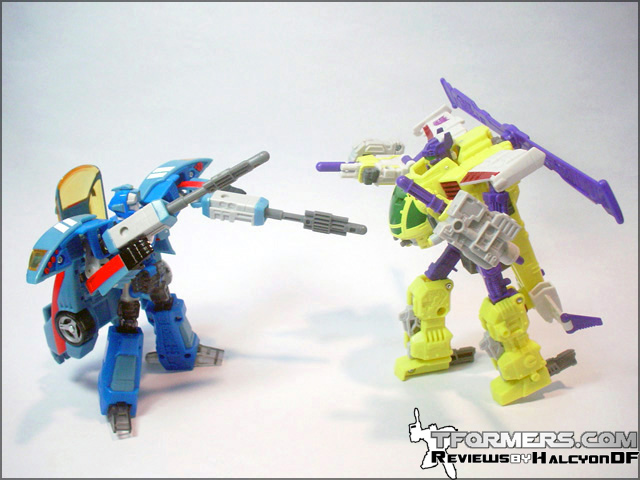 Please take the amount you are about to spend on this set if you are considering buying this and buy any other ultra sized figure like Flame Convoy or Dreadrock. Even if you are a completist, I would recommend staying away from them and having a complete Galaxy Force collection void of these sets. Seeing the great figures Galaxy Force has in its line up, these sets are not worth it and are disappointing to have Galaxy Force tagged to them, unless you like the Armada stuff. Overall, i would give them a 5/10 as a set.