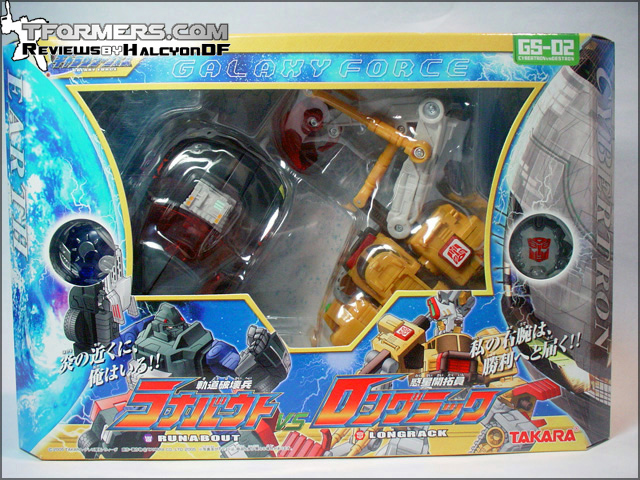 This versus set pits Destron Runabout vs. Cybertron Longrack. Both Figures are from Micron Legend/Armada and have been significantly retooled and repainted to resemble to a certain extent their namesake. Runabout is retooled from Sideswipe (Armada) and Longrack from Hoist (Armada). Both are deluxe sized figures being sold together at the ultra price point. A theme runs through both Vs Set GS-01 and GS-02 and the theme for this set would be the ability to ‘smite’ after Force Chip ignition. 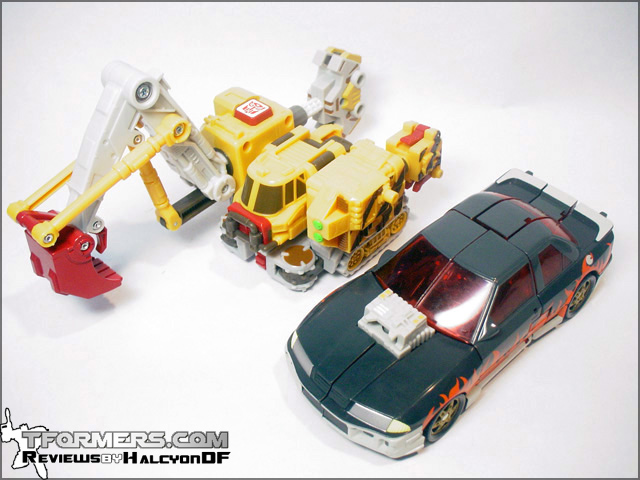 Alternate Mode
Originally a blue car in the previous release, Runabout is now dark gray with a flaming orange motif surrounding it. The windows are dark red now too. Sadly, the gray is rather flat. A deep glossy black would have gone well with the orange flame décor. The Force Chip slot is now on the hood, in disguise as an engine block. 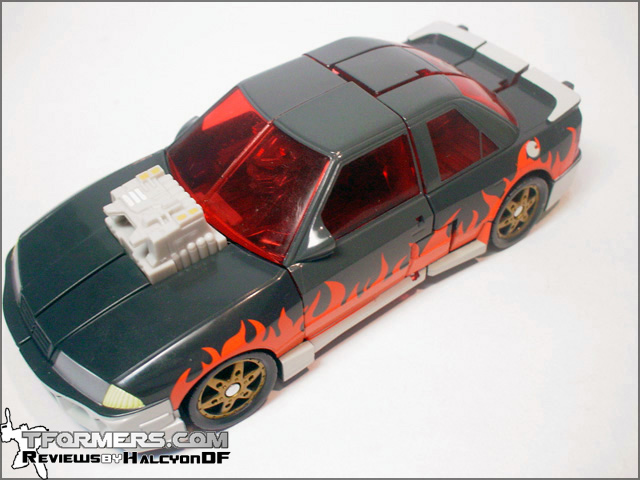 On the rear window, Runabout declares his allegiance to the Destron Forces by having a large silver outline of the Destron Logo. One rather obvious flaw is that Runabout has too many lines of separations and looks like he may fall apart anytime. 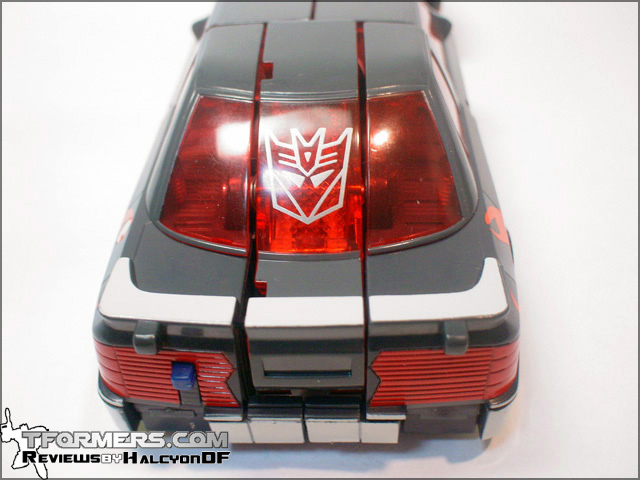 There is a blue button on his rear end that flips open a center panel that his gun/pipe can be attached too. When the pipes are out, besides looking like exhaust pipes, there are 2 wing flaps at the sides. His Force Chip extends the front of the car, making Runabout look like semi-drag racer. To say the least, this is not a very interesting mode. 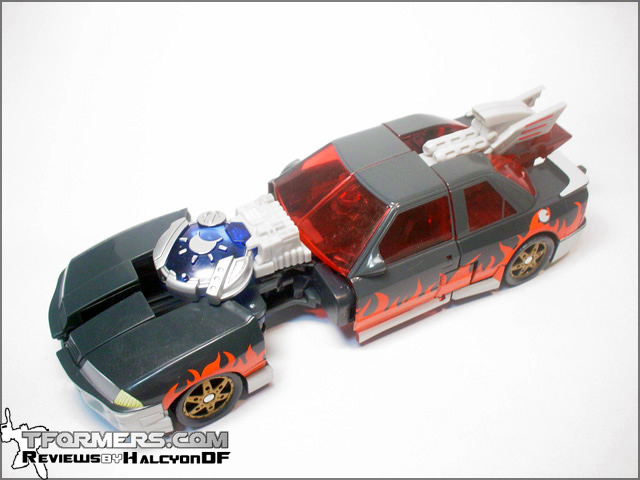 G1 Runabout was a black car hence the choices for colors on GF Runabout. However, I feel that black would have been a better choice rather that the dull dark gray.

Verdict: 5/10 Lines detract from his overall form. Force Chip gimmick do not make much sense.

Robot Mode
Runabout has his head replaced with one that resembles G1 Runabout. It is not a pretty head but it is rather evil-looking. His head is probably the nicest thing going for him because it all goes downhill from neck down. Certain vintage G1 have more posability and articulation than Runabout and Runabout is certainly without that vintage touch. His shoulder joints are very limited in range and his elbow joint does not hold. The lower arm always goes back to the default position. He has no knee joint but his hips can swivel. However, it is a chore to get him in poses other than standing straight up. Even while standing up, you can see how disproportionate his arms are and how wide his legs are apart. 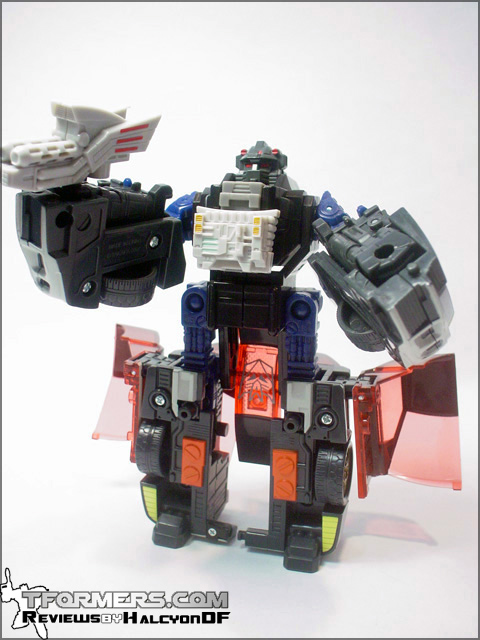 Runabout has his force chip’s ignition gimmick carried over to his robot mode. The chest piece is required to be elevated and the arms locked around it. The force Chip does the same thing here but it seems like now Runabout is smiting someone with his oversized arms. His pipe that attaches to his rear can be used as a gun with the help of a flip down gun handle. 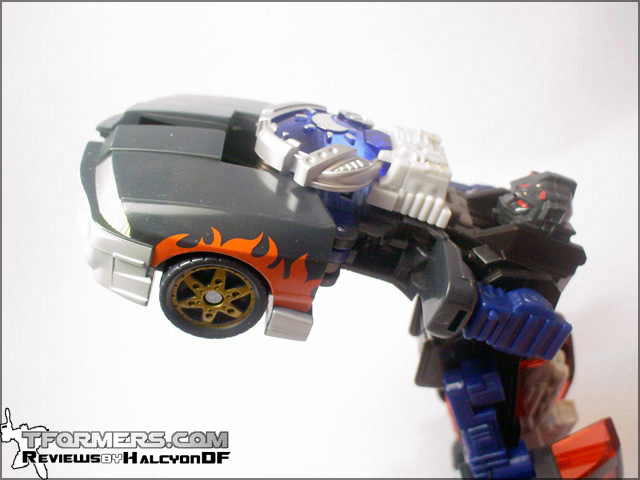 Verdict: 2/10 This transformer should be locked up and never sees the light of day again.

Alternate Mode
Longrack is a cybertronian digger machine is his alternate mode. Mainly golden yellow with brown, red and gray, Longrack is painted to match his color scheme from BW Longrack, who is a giraffe. Those stripes and windows which are brown do certainly carry a giraffe look to them. 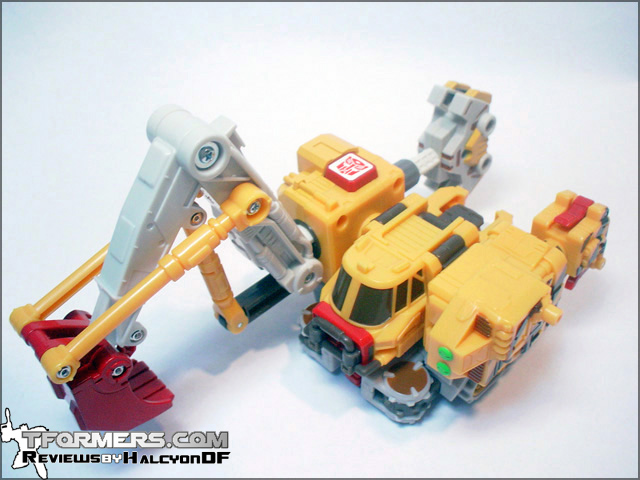 Longrack rotates at the base, atop the treads. These tread are not real and locomotion is supported by red wheels underneath. 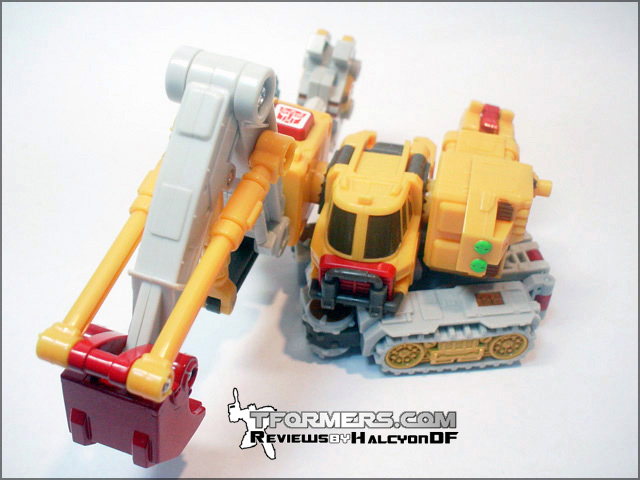 His force chip unlocks his right digger arm and pushing that tag behind extends the digger arm forward. Repeating it does make Longrack look like he’s digging. The arm extends rapidly too so it would serve well as a weapon. The tag behind can be rotated also, and with it, rotates the digger arm. As useful as the tag seems, it does look out of place, like a wind-up mechanism on a toy soldier. 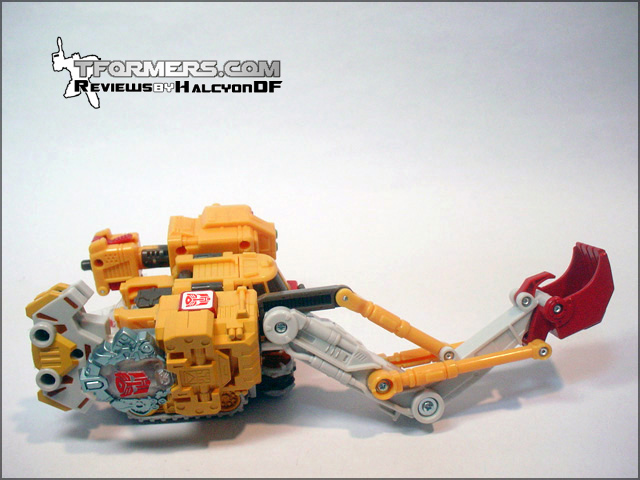 I would saw Long rack is the nicest figure in vehicle mode compared to the other Armada repaints in GS-01/02.
Verdict: 7/10 Great Colors and High play value.

Robot Mode
Longrack has his head retooled to be an exact copy of BW Longrack. His head is much smaller that the original Hoist and this makes Longrack look bigger and more powerful. Coincidentally (or planned rather), BW Longrack has a giraffe neck for his right arm, while GF Longrack has a digger arm. When in robot mode, Longrack is primarily gray from waist down and yellow from waist up. It is quite a nice pleasing color scheme, this time round. His legs are also very poseable with a proper ball joint for his hips and a nice ratchet joint for his knee, allowing for a myriad amount of poses achievable. 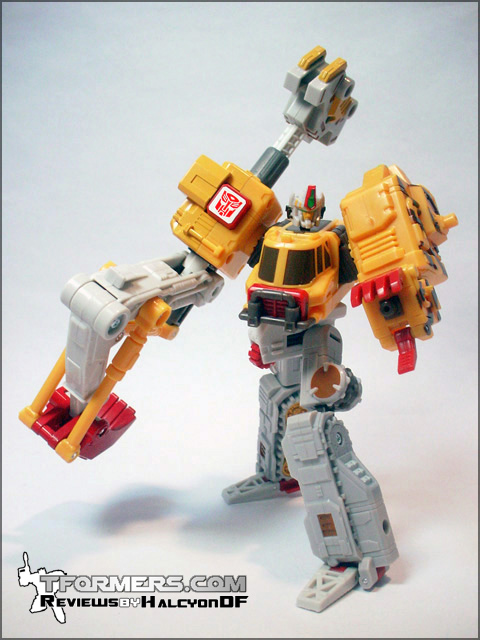 His right arm has the same limited motion and force chip capability carried from his vehicle. Of course, one has to excuse that arm for its lack of articulation. Also, care needs to be taken as this arm affects his center of gravity to a large extent. His left arm however, leaves much to desire. Having the same blocky shoulder naturally balances out both his arms both the lower left arm is disappointing, looking like a baby version of Energon Scorponok’s arm. Given the limited range his shoulder joint has, a ball joint would have been much better for his left arm. 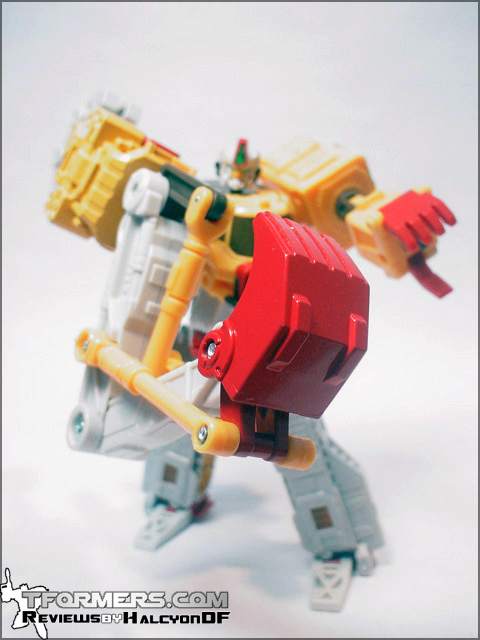 Like his vehicle mode, personally, I feel Longrack is the nicest out of all 4 GS figures releases so far.
Verdict: 7/10 Great lower body articulation and color scheme saves this one from the pits.

I would say that we all know that Micron Legend/Armada were not too well received in general. What I can surmise is that Takara has done the best improvements possible (but still not good enough) to these molds and retooled them to pay homage to previous series so as to recur some of the losses with these molds. Oddly enough, they have chosen a G1 homage (Blurr, Runabout) versus a BW (Buzz Saw, Longrack) homage for both sets. 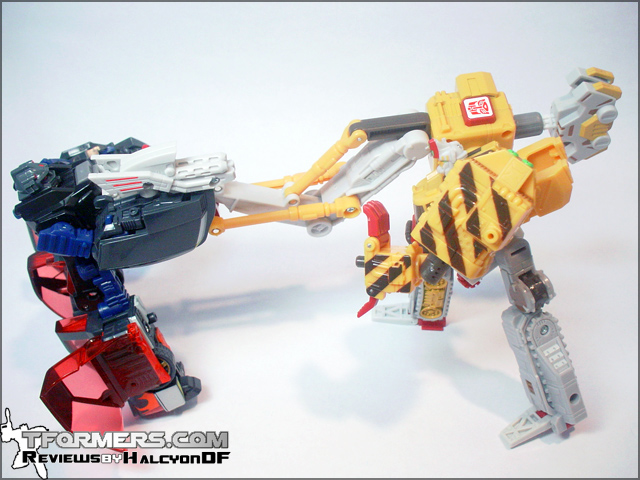 Please take the amount you are about to spend on this set if you are considering buying this and buy any other ultra sized figure like Flame Convoy or Dreadrock. Even if you are a completist, I would recommend staying away from them and having a complete Galaxy Force collection void of these sets. Seeing the great figures Galaxy Force has in its line up, these sets are not worth it and are disappointing to have Galaxy Force tagged to them, unless you like the Armada stuff. Longrack however is a nice figure by itself. Should you ever get a good deal on him, he would be worth it.