The Masterpiece Optimus Prime figure heralded the greatest gift by Takara and Hasbro to the fans in years. Albeit a gift that set you back $80-$100, but still a Fanboys wetdream. The biggest want after scoring a figure like this however, was the desire for something more substantial than a crappy cardboard cutout for a trailer.

There have been a couple of fans that have made their own customs and even one who would make a full electronic replica of the G1 trailer that would set you back over three Benjamins. Nice...but no thanks! Then I saw the announcement of this custom trailor made by "Just I Toys" and the advertised $90.00 price I just couldn't pass on. Here is my review. Enjoy.

The thing that impresses me most about this Trailor is the companies attention to detail when trying to make it look like it is suppose to go hand in hand with your MP Optimus. The box is in the same black, with reflective silver piping, theme as MP-01. Make no mistake, this is not an officially lisenced piece, as evidenced by the lack of trademarking symbols and names.(e.g. "OP" rather than "Optimus Prime".) 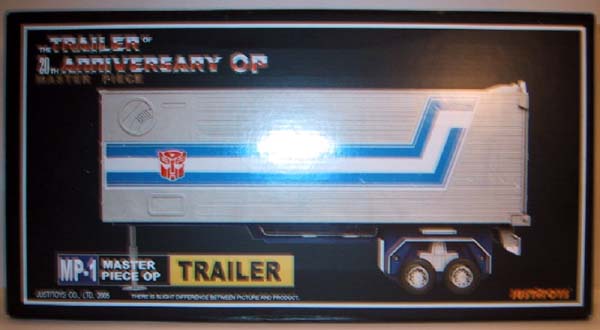 The back of the box is no less of a homage to the original MP-01 box as several flattering pictures are given to the Trailer along with quips about its features. 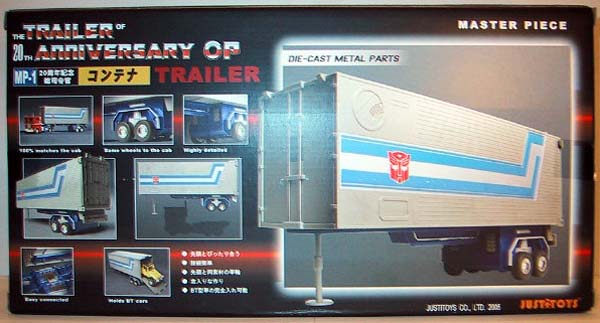 But who really cares about the box right? Well the actual piece is no less impressive in the effort to be G1 accurate. All the way down to the line along the top where the original G1 parted to form the battle station. The lines and detailing on the side are exacting to the G1 figure in every way except where the G1 Optimus trailer had stickers running the length of its side, the Master Piece Trailer has painted plastic. An additional bonus is that you are supplied with a small stand to display the Trailer sans MP Optimus. 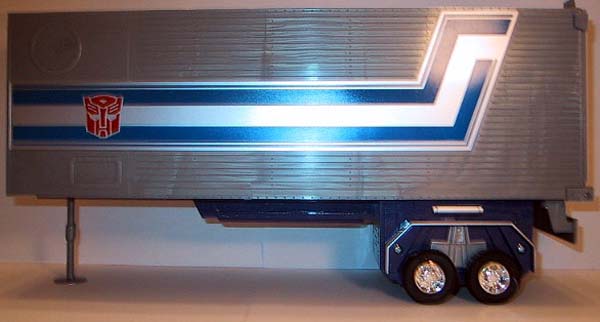 A look at the backside of Trailer tells you in no uncertain terms who this puppy is made for. "20th Anniversary is splashed across the bumper just below a nicely painted door. 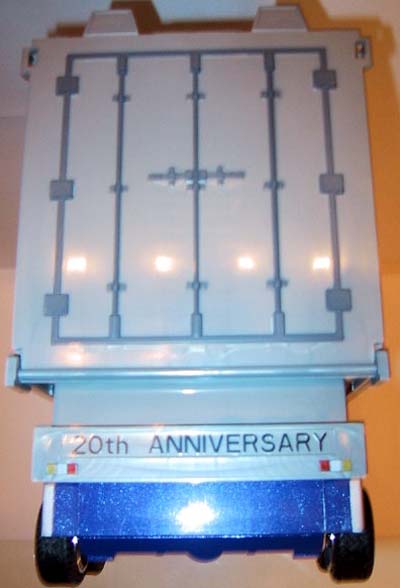 On the underside you see a detailed carraige with MP-01 quality/style wheels and additional paint detailing which this single picture doesn't really show, but I had to limit the pictures somewhere. 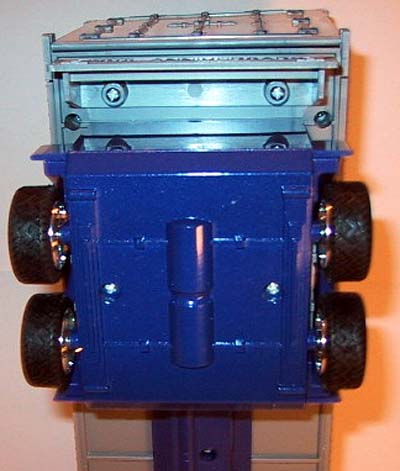 Inside the Trailer I found a special surprise that I wasn't expecting. On the floor of the interier are tire stops. They are wide enough to fit a number of different Alternators/Binaltech cars. You must be careful in putting them in however because the fit is snug. Getting them out is even more challenging. I had to give Grimlock a quarter turn to get him out without catching the side mirrors. Hound slides in and out much easier because of his slimmer profile and bendable side mirrors. 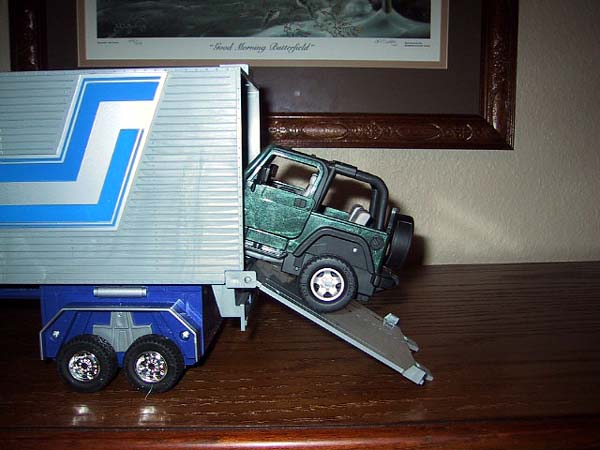 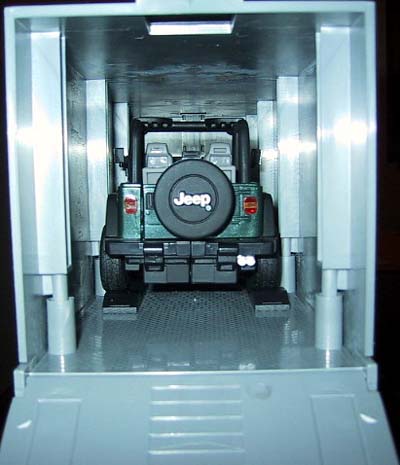 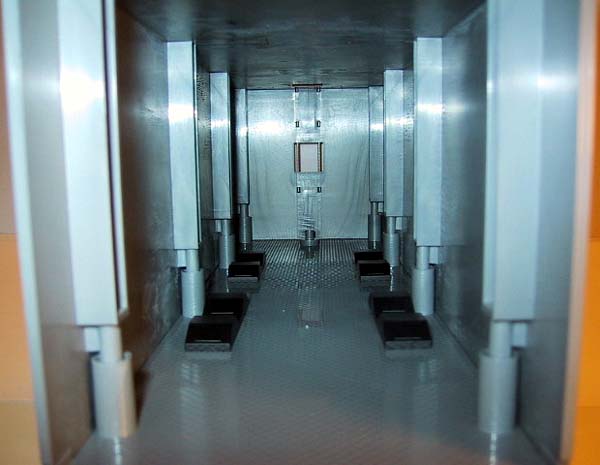 And finally, this review would not be complete without a couple of pictures of Mr. Prime himself sporting his new caboose. The Trailer connects to the cab via the grey cab connector on Prime's leg.(Thank you Hastak for putting it there even if you didn't intend to make the Trailer) You take the small black plug provided with your MP-01 and slide it into the grey cab connector. The Trailer itself comes with a small metal bar(Wonderfully not plastic which could be easily broken) that you slide into the black plug and you have Optimus Prime in all his intended Glory. 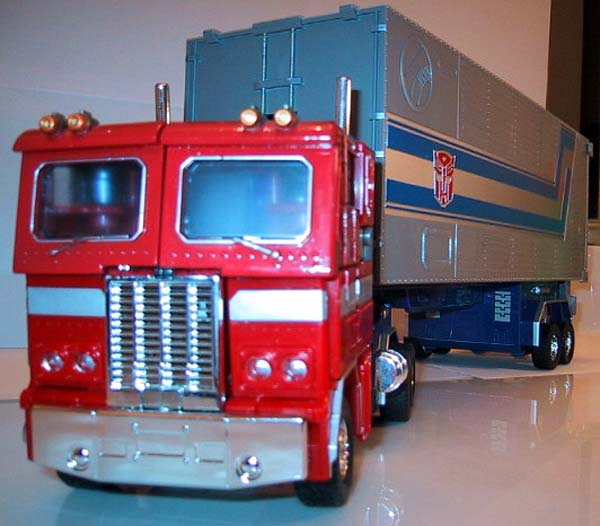 I am very impressed with this piece, but not totally blind to some of the things that could have been done to make it a more complete item. A token "Roller" could have been included. The back door is tight and just like G1, I always fear undoing it and unintentionally busting off one of the plastic clips. Although the original G1 Trailor had a small opening in the top and the front panel, I dont' really see the need for them on the Masterpiece Trailer. They serve no functional purpose where the G1 version it was at leas possible to extend the combat deck vehicle above the Trailer when it was closed.

Overall this piece is worth the $90 I spent on it. Sitting on the shelf next to my G1 and MP-02 Ultra Magnus, it just completes Prime in so many ways.