When I first laid eyes on Nitro Convoy, thanks to Remy and his amazing galleries, I immediately thought this was another Galaxy Force figure to own. However, after forking over a ton of cash for Galaxy Convoy, Master Megatron, and Starscream, I figured I would hold off on this guy until the Hasbro version of him was released this summer. I wish I had stuck with that plan as he was a disappointing purchase.

As a futuristic sports car from the planet Speedia, Nitro Convoy is sharp looking. With aggressive front and rear quarters and a swooping front windshield, everything about the car screams speed. As a concept, I like the form. 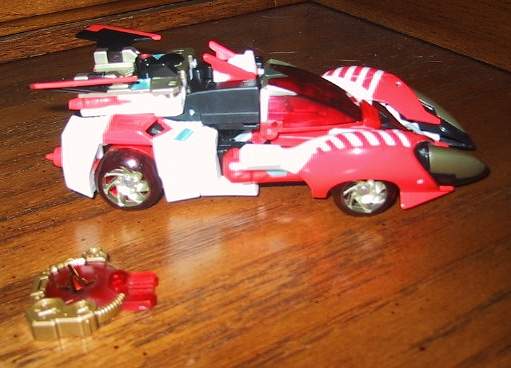 But I have never been impressed with Alt. modes that display a figures head. No matter how little of the bot's head is showing, it just doesn't seem to fit with the "Robots In Disguise" theme that is the basis for all Transformers. Takara seems to have forgotten that with the Galaxy Force line as it seems numerous molds have this 'design flaw' as I call it. (Galaxy Convoy, First Aid, Nitro Convoy, Starscream, etc.)

That being said, I still think Galaxy Force is a great line, and so on with the review.

In Alt. mode, Nitro Convoy's force chip is utilized to expose two onboard laser cannons. Upon insertion of the chip, they sweep out from the rear top of the car to wreck havoc on anyone who has the gull to pull out in front of Nitro in a race.

For an Alt. mode, overall I like Nitro in Car mode. His head playing peek-a-boo is a disgrace, but with the sweeping wings at the back of the car you can almost forget that those two horns are the top of his head.
I give Nitro 7 out of 10 stars for his Alt mode.

My like for Nitro Convoy was greatly diminished when I realized that he was a "trigger" transformer, similar to BeastWars Megatron and the 2001 repaint of the same mold, Wind Sheer. This gimmick is one of the worst. You touch a portion of the figure and it triggers all or part of the transformation. In Nitro Convoy's case, you push in on the front black bumper and his top pops rearward while his arms come out from underneath.

Call me old fashion, but I like to actually 'transform' my transformers. Also, when keeping these bots for an extended period of time, the parts begin to lose their hold and will sometimes spring open when you don't wish them to. This is irritating and hardly worthy of a Deluxe priced transformer. While taking away the transforming fun from you on his upper body, they leave you with the legs to take care of. This is just an added reminder of the other disappointing part of this mold.

When fully transformed, because Nitro is very top heavy and all of this weight is located in his back, Nitro won't stand up straight. The rear white pegs meant for his heals are just not positioned correctly to allow him a good stance. Thus you must constantly lean him forward or suffer a backward tumbling bot at every turn. 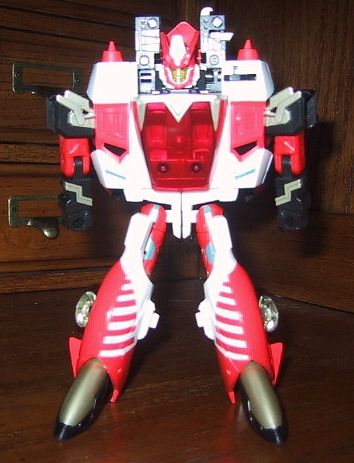 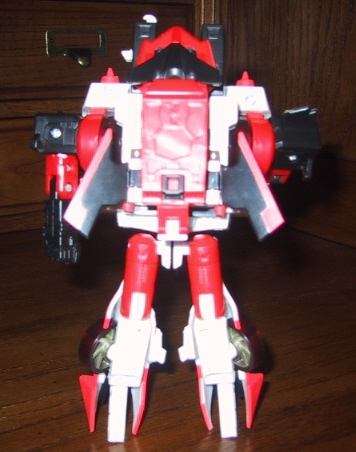 I'm sorry Takara, but you could have done better.

Pose-ability isn't great. His legs bend well enough and can turn in and out, but his toe and heel design don't allow for much in the way of adjustment. Nor can you overcome the constant necessity to bend him forward in order for him to remain upright. 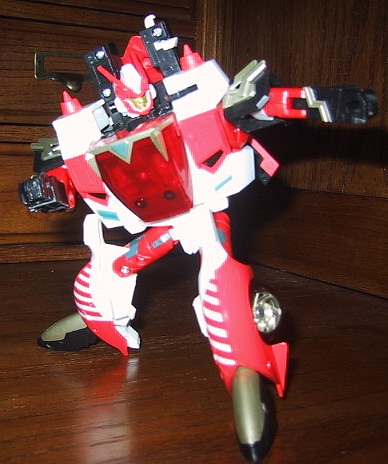 Taking his gun off his back and using the force chip helps with the weight issue some but does not completely solve the problem. As you can see in the next picture, even though I had the weight off his back and the gun weighted toward the front, the bot still needed to be bent forward in order to stand. 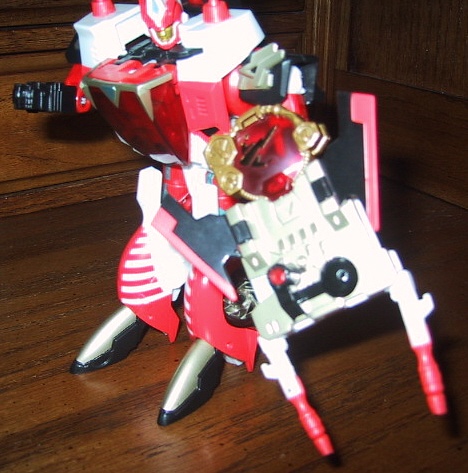 Overall, the esthetics of the Robot mode are fine. But the design flaws in this figure just grate on play-ability and display-ability.


In retrospect, knowing what I know now, I would have waited to purchase this figure until Cybertron released here in the states at the very least, and possibly even waited for a sale. He is certainly not worth the $25 plus shipping that I paid for him, and that is one of the better prices for the Galaxy Force version. Since Deluxe figures go for $10 in the states usually, that would have been much more reasonable. Some may say 'That is why I don't buy Japanese figures' and perhaps in this case, they are wiser than I.