I donâ€™t know about you but I get a thrill out of looking for new figures when they come out. I havenâ€™t for this guy near as long as say Grimlock and Swoop but the thrill was still there when I uncovered him at the Wal-Mart. I was all for getting Grimlock until I saw this guy. Heâ€™s an autobot with awesome remold like the decepticons usually get 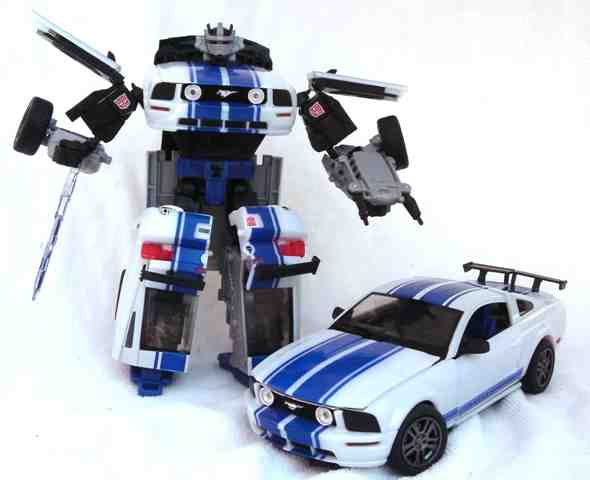 2005 Ford Mustang GT. The outside headlights have been blacked out where they were present on Grimlock. Also the rear spoiler is more of a racing spoiler than that of the original mold. The car is white, not ultra white but more like a pearl white, with blue racing stripesâ€¦. Badass! Interior is nicely detailed in black with stick shifter, emergency brake, molded radio, and blue seats.


The side mirrors are reflective however the rearview mirror is not. The stripes across the doors look nice and line up well with those on the body. The tires are not Cybertronian Radial; they are blank like those of Smokescreen. They also appear to be Aquatread. Now to what I donâ€™t likeâ€¦. mostly on the rear end, the GT medallion in on the split where it separates to form legs so it ends up being off center and not lining up just right. Also the brake lights arenâ€™t dark enough and look pink. On the front end theyâ€™ve blacked out the headlights, it just doesnâ€™t look right. 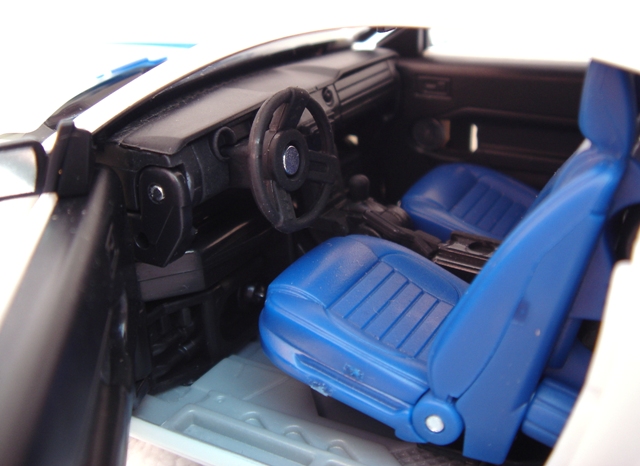 Iâ€™m not gonna go step-by-step cause this motherscratcher is hard. The legs and waste are easy but the top halfâ€¦. throw out the directions they make it harder than what it is. The doors, forearms, and under body panel frequently pop off. They pop right back on but they could wear out easily. The head through the hood design is nice but hard to maneuver and line up correctly for the finished pose. Iâ€™ve also popped off both legs but itâ€™s only happened once, mustâ€™ve been like a freak occurrence or something.

This is also a great mode. His doors have become wings like energon Hotshotâ€™s. His chest is the mustangâ€™s front end and legs are the rear half. Proportionally one tough looking bot. Where Shockwave and Meister are broad shouldered and narrow the rest of the way down, at least till you get to their feet, Wheeljack is broad all over until you get to his feet.

Grimlock is of the same design but comparatively a pinhead. Wheeljackâ€™s head design looks better compared to the rest of his broad frame. The ears seem to make his head fit better, theyâ€™re not as big as the originalâ€™s and not as stunted as Downshifts, just in-between. His blue pelvic underwear fits perfectly to his stripes.

His front wheels hang off his forearms and the seats become his feet. Kinda weird, if you ever ride in this guy make sure he wipes his feet. The only crap hanging off all useless and junky is the windshield/roof and the unibody frame underpanel. Nothing to really inhibit the posablity much except the unibody frame and the stout legs.

Normally I wouldnâ€™t give them their own section but this time I will. The engine becomes a double-barreled ______ gun. This brings me to the only major flaw in this line of transformers, the lack of storyline and/or character profiles/naming of weapons. Just let us know if itâ€™s a shrapnel needle, gyro inhibitor shells or an electronic tazer. Any way the gun is kinda crappy. Itâ€™s wide and flat with pointy barrels, fold the barrels in and youâ€™ve got a perfectly nice shield for sword fighting. Which leads me to the sword, a clear plastic device with blue painted in the middle. One could say that the blue is the medal and the clear is the power that radiates from it. Grimlockâ€™s is basically the same except where this one is clear his is orange and where his is clear this one is blue, fire vs. ice if they ever battled. It looks better as a drive shaft than that of Grimlock. Iâ€™m just not sure Wheeljack should have a sword. Grimlock yes, Wheeljack no. 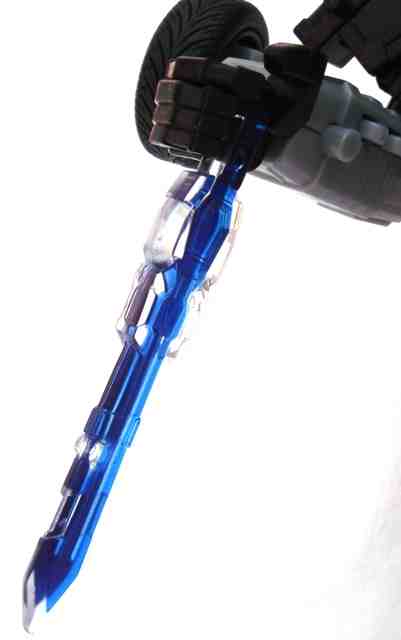 You canâ€™t go wrong with this guy unless you are into noise, gimmicks, or simple transformation. This guy is great in vehicle and bot mode. The only real drawback is how frustrating the transformation can be.