Alternate Mode
Despite First Aid looking like a conventional Earth vehicle, it is indeed an uncommon form for an ambulance as most ambulances would be shaped like a van. First Aid is an ambulance modified from a SUV. There are such vehicles, just that they are not commonly found. First Aid is colored mainly in a slight off-white, with bronze for bumpers and the rims above the wheels. The windows are transparent red. Two dark blue lines run across the hood and one each on the side of the vehicles. 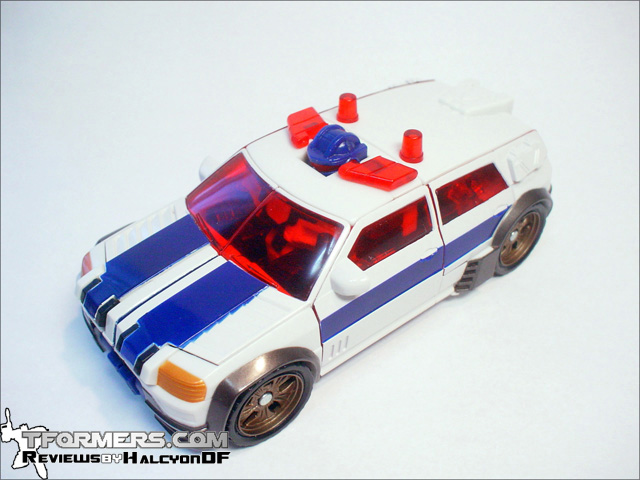 The front of First Aid looks very sturdy. There is a grille detail at the center and below it are hinges to flip the feet out. This does not work against him but rather, look like reinforced bumper parts or wire clenches. The blue hinges do not seem out of place due to two blue lines on the hood, making it looking almost like a continuation. 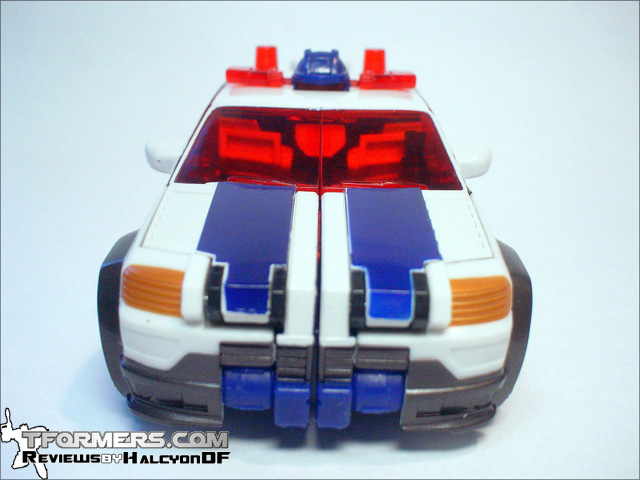 Details are aplenty on First Aid: vents on the hood; the orange headlights; lights sirens on the roof and car door handles even! Talking about his roof lights, they are the same transparent red as the windows. The center part between then, which is actually his head, looks like a siren. His hub caps are also a nicely detailed 5 ‘petal’ pattern. 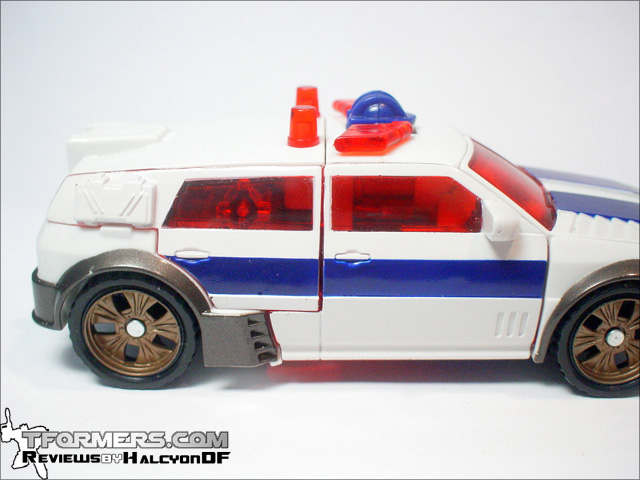 The white paint around the window tends to be uneven around the windows bleeding in and out of the edges. The doors have a bit of width to them, and being painted on one side, some red is visible along the separations, significantly cheapening the look of First Aid. 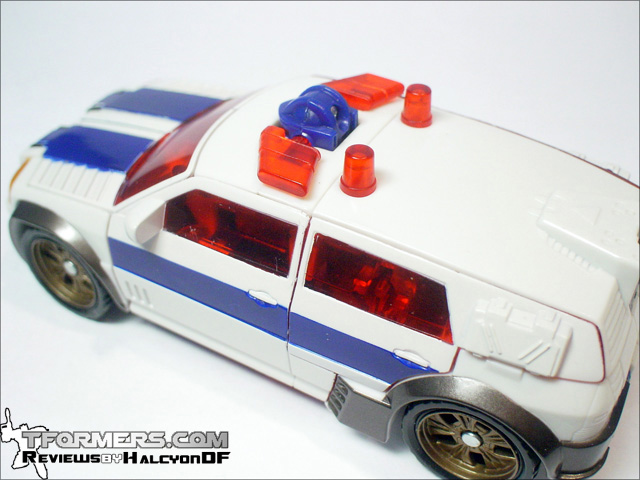 First Aid has the Force Chip slot on the rear. ‘Ignite’ him with his Earth Force Chip and the rear ‘doors’ (not complete doors) extends outwards. Two guns spin out of their hiding place 180 degrees and give First Aid some offensive. It is a simple gimmick, but is not too bad for what it does. 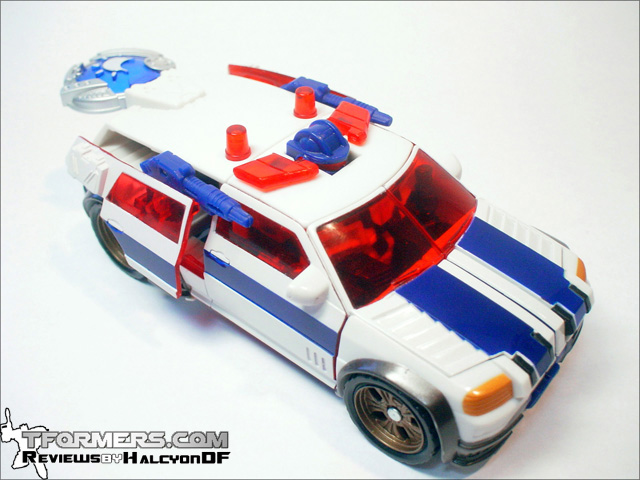 Robot Mode
Transformation from car to robot is unique for First Aid. I have not seen any other transformations looking remotely like First Aid’s. The front and rear come together to form the legs. The center portion forms the torso and the back of the roof hangs on his back. I would have to say his transformation is impressive – and unique! 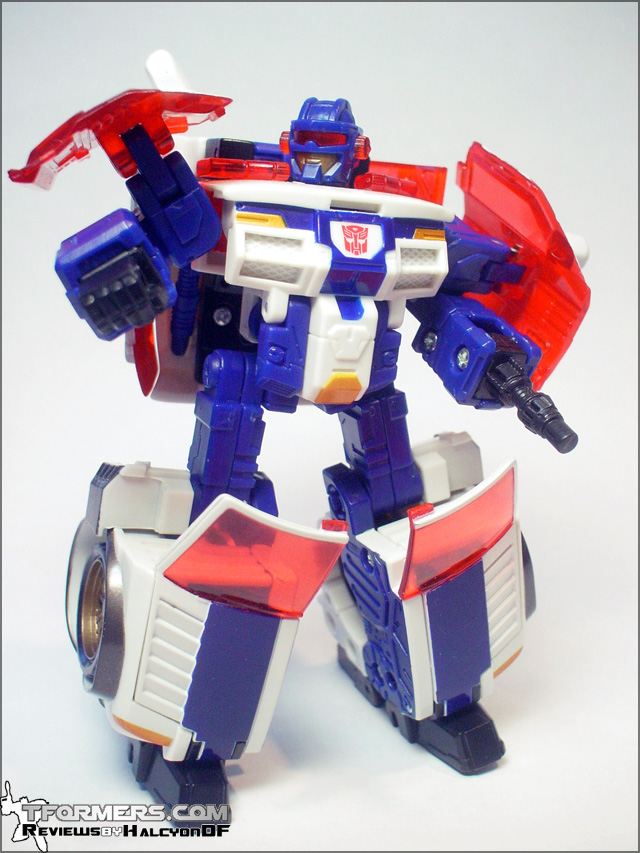 The first most noticeable thing about First Aid is that he is the shortest deluxe so far release, shorter by at least 1 inch or so compared to Nitro Convoy or Exillion. His colors remains larger the same except for a lot more blue on thighs and hands. His head resembles Armada Red Alert a lot; differences include a straighter visor and gear-like ear pieces. His mouth area is shaded bronze, much like the hub caps. The lights on his shoulders now look like a soldier’s epaulettes or ranks. Perhaps it shows that First Aid carries some rank among the Cybertrons.

One thing I love about him is that the doors are on the edge of the shoulders, acting as flank guards. The windows are there to let First Aid look out for incoming hits! The elbow joint is located quite high on the arm, but considering his short arms, it does not look off. The left shoulder joint on my First Aid has now gotten loose. I believe this is due to rotating the joint while transforming him several times. His torso is pretty good looking, shaped like a ‘T’. The vents at each side of his chest look Gundam-inspired, but compared to a Gundam, First Aid’s chest is flatter in appearance. A Cybertron symbol is located at the center of the chest, a nice little detail, except mine is located off-center slightly. 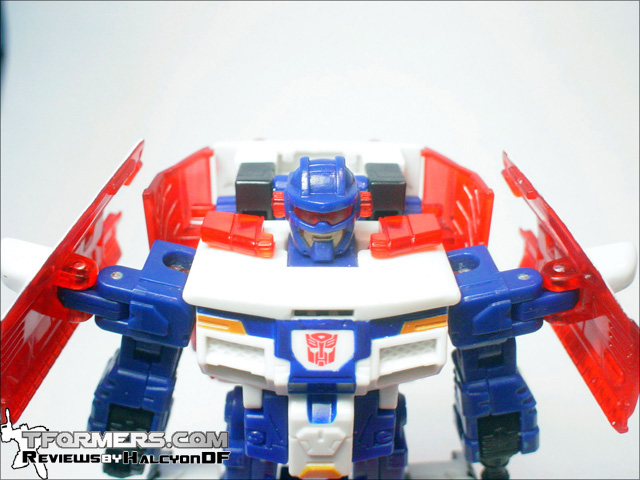 The windscreen is split into halves and acts as knee guards for First Aid, which is rather like Jackshot’s knees. But at least it is transparent and it does serve a purpose – it acts as a handle to open First Aid’s storage compartment. Each compartment can either store one of the two arm attachments; a claw and a hammerhead. Both attaches to First Aid’s left arm, which is shaped like a wielding torch. The claw extends the arm and the jaws can open and close. The hammer attaches right on top of the torch. This definitely ups his play value a lot! Personally, I love this feature of his. 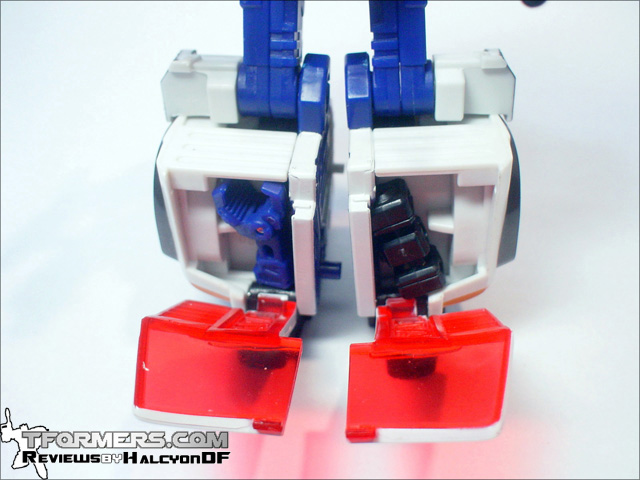 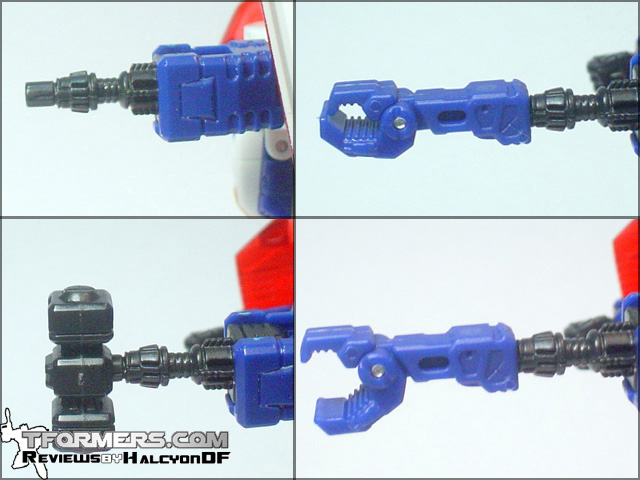 First Aid’s legs is not very articulated, only rotating at the hip and knees, and being able to split his hips to separate his legs. To compensate for this, he is very stable. He can bend over all the way till his backpack hits his legs, and tats around 90 degrees. 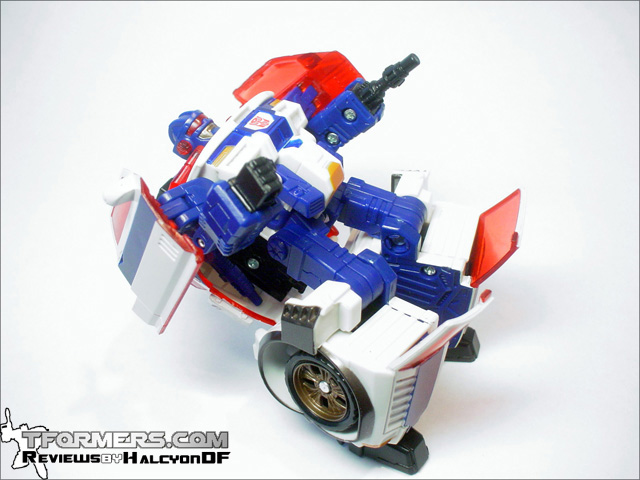 First Aid has the same ignition gimmick in both modes, but this time the guns rotate around 270 degrees and stay on his shoulders, becoming shoulder-mounted guns, definitely boosting his arsenal in robot mode! 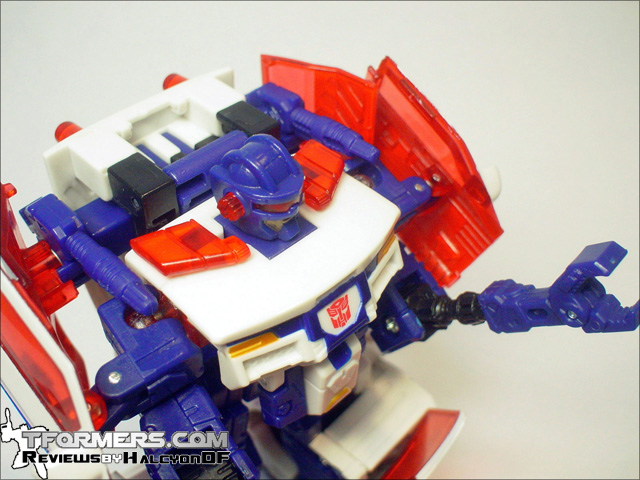 Verdict: 9/10 Despite an off-center symbol, loose shoulder joint (both isolated cases, I believe), First Aid is otherwise a great deluxe! 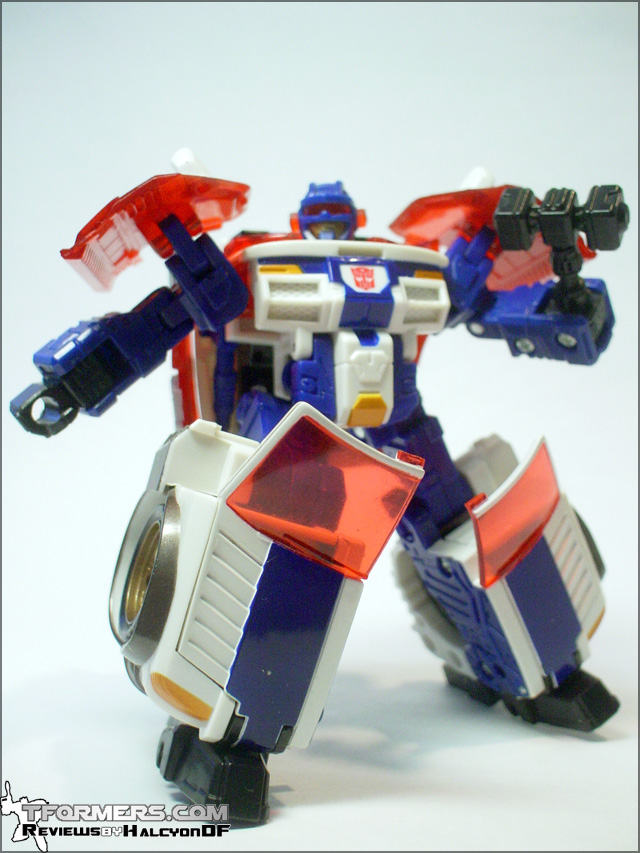 Definitely worth getting! This is one of the few Galaxy Force figures with a realistic alternate mode and great robot mode to boot.