Alternate Mode
Nitro Convoy certainly has an interesting 4-wheeled vehicle form that is characteristic of Speedia natives. I would group him as the same type of racing car that Master Megatron can transform into â€“ looks terrestrial in shape but extra-terrestrial in form. Nitro Convoy is streamlined from the front to the back, with 2 round bulges at the front housing the front wheels and the headlights. Like all Speedia native Transformers released so far, Nitro Convoy has transparent wheels, but the hub caps is painted gold and styled much like a spinning fan, interesting indeed. 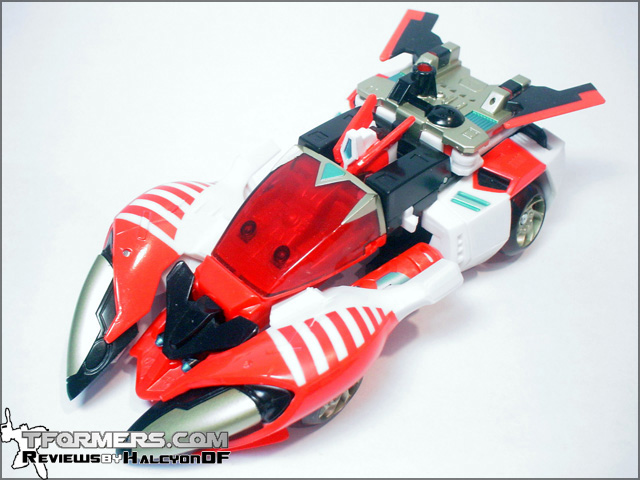 The front is probably the weirdest part of Nitro Convoy. The direction of the bulge is diagonal as opposed to the more common direction which is upwards, following the shape of the wheel. It also visually obscures part of the wheel, although it definitely does not affect the rotation of the wheel. This bulge also has a weird red/white stripe pattern, weird being that this pattern neither implies speed or gives the car the â€˜zoom-zoomâ€™ effect that some racing enthusiasts paint their cars with. The next flaw would be the gold headlights right at the tip. We all know that those become his feet and what forms subconsciously would be a image of this Transformer wrapping his feet around the front of the car. What would have distracted us from this though would be making the headlights transparent as they are in the show. Transparent red plastic is already in use for the cockpit area so surely it would not be too difficult. 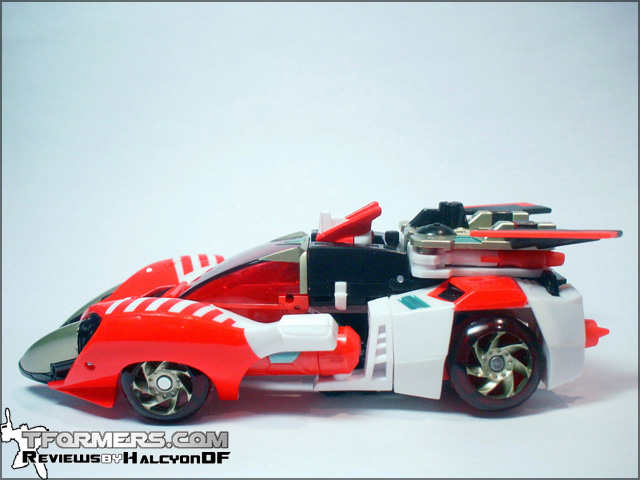 The cockpit is shaped to go flush with both the front and the rear and ends up with a nice curve. Inside the cockpit, you can clearly see seats for two. It is framed by a golden line at the back and adorned with a metallic cyan diamond. Behind the cockpit sits the top of Nitro Convoy. I do know that some people do not like to see a head in a Transformerâ€™s alternate mode, but this really is not a big issue here or so I believe. The head is painted with the same colors â€“ red and white â€“ as the rest of the car and has a metallic cyan diamond matching the other diamond in front of it. Also, the two wings atop his head helps to assimilate his head into his alternate mode. 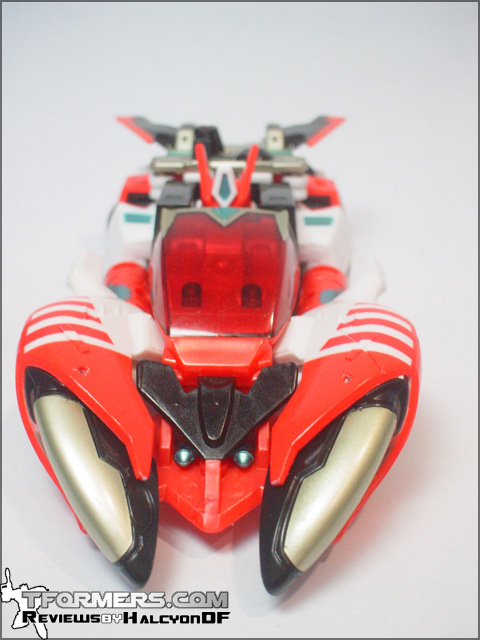 His rear engine portion is mainly gold and largely decorated with sculpted detail. This is also flanked by two rubber fins. Now these two rubber fins are rather problematic. They come with a hinge so obviously they can be rotated as permitted by the square hinges, which would be at the 90 degrees and 180 degrees. However, once u elevate these fins, it is very hard for them to lie flat horizontally. The rubber deforms when turning the fins down and thus prevents the flap from â€˜lockingâ€™ down to a flat position. This is definitely a case of bad engineering. 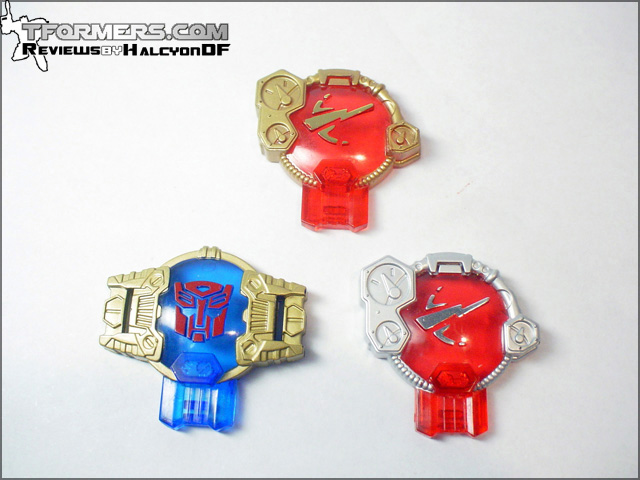 Nitro Convoyâ€™s Force Chip is by itself an interesting item. It is the same as the rest of the Speedia Force Chip but because of his Commander status, the silver paint is replaced by gold paint that is similar to the gold paint found on Galaxy Convoyâ€™s Force Chip. Now about his â€˜ignitionâ€™, when the chip is inserted, two gun barrel swing out from the sides of the engine block. These are half white, with the front halves being red rubber. 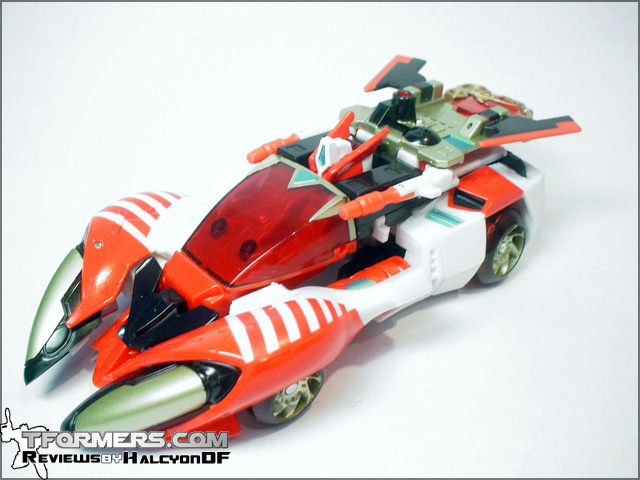 Verdict: 7/10 Good figure? That depends on personal preference. Personally, I do not really like the unique look, but nonetheless there are no major flaws with his vehicle mode.

Robot Mode
To go along with the speedster theme, Nitro Convoy features a semi auto transformation! Push up the black triangle at the front of Nitro Convoy while in vehicle mode and his upper body will full transformed. Here is the sequence:
1) Rear wheels rotate out to reveal both arms.
2) Whole portion with head, cockpit flips up.
3) The same portion unfolds into 3 parts: the back, the front and the neck area. 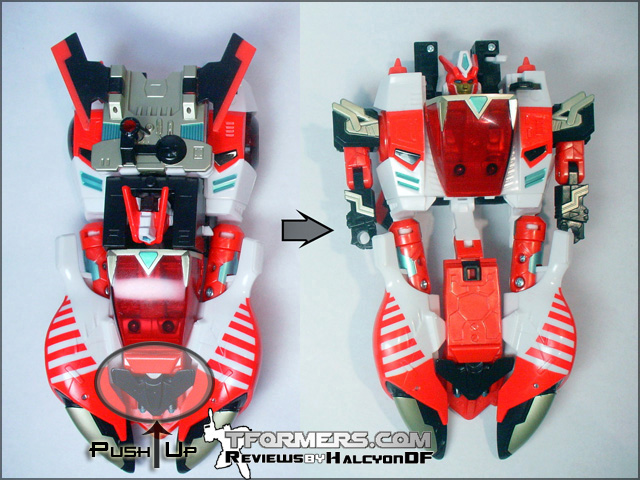 To complete the transformation, unfold the feet and heel and rotate the hips inward and then proceed to flip the remaining switch portion (where the cockpit use to rest) up to the back.

Nitro Convoy is now fully transformed. Personally, I am thankful that this feature did not come as a Force Chip Gimmick. Should the force chip be lost and if the owner only has Nitro Convoy, this figure might be forever locked in vehicle mode. Also, it has been a while since a semi-automatic transforming Transformer came out. 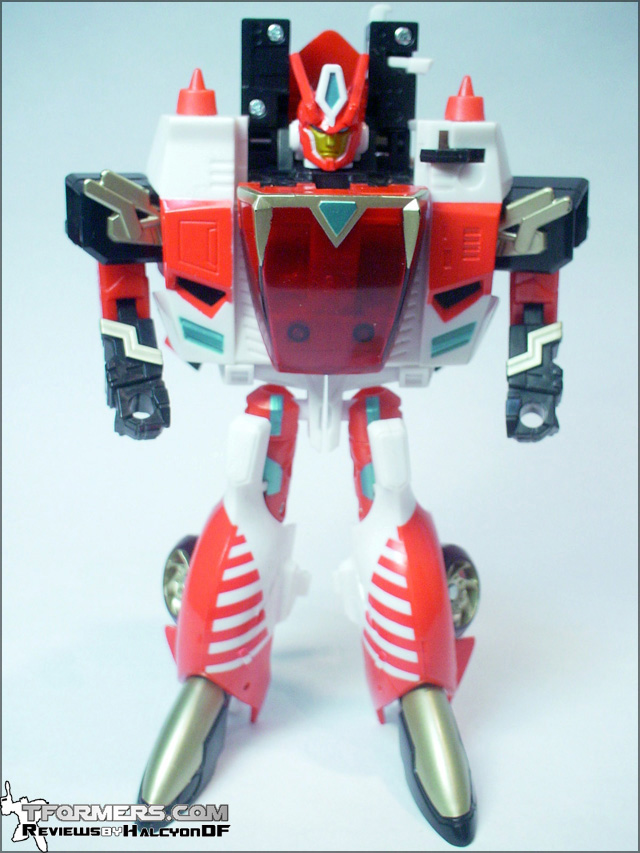 Nitro Convoy retains almost the same colors he had in vehicle mode, except for some more metallic cyan on the thigh and a yellowish gold for his face. His head is atypical of a Convoy (as are all other Galaxy Force Convoy so far seen) as it comes with a full face without a mouth plate. His eyes are cyan in color and he has a sort of disgruntled look to his face due to the way the mouth is portrayed. Two fins lay backwards on his headpiece, resembling the winged cap of the Greek God, Hermes, another reference to speed. His forearms and shoulder is also covered with gold zigzag detail that looks like pipes. His arms are well articulated at the elbow, upper arm and at the shoulder. It is although a bit hard to pose the arm due to the spring-loaded mechanism. However, holding the shoulder solves the problem.

His legs are formed from the front of the vehicle â€“ the headlights become his feet; his front wheels housing become his lower legs. The wheels point outwards, which looks kind of nice. His knee caps are way high, covering much of his thighs. His heel unfolds from the underneath of the feet. Despite him being able to stand without the heels - there are two points on each feet which touches the surface at the same level as the heel - it is not recommended so as the two points might get chipped. His legs are also well articulated. 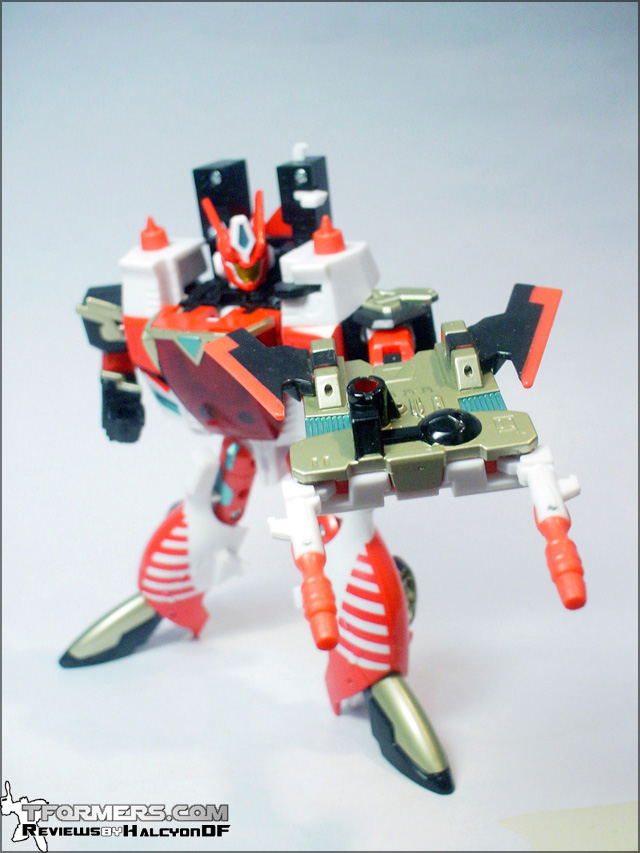 Nitro Convoy would have been an excellent looking figure if not for the wide torso. Nitro Convoy has proportionate arms and legs so that just emphasizes his wide torso Taking a bit off his shoulders (the part with the afterburners) and the lower torso would help reduce his â€˜wideâ€™ look considerately but I have no idea how it would affect his vehicle mode.

The Force Chip transforms the engine block into his gun. It does the same thing in vehicle mode â€“ ignition pops the gun barrels out, turning the block into a twin barrel gun. The gun/block can be stored up on his back, but when it does, Nitro Convoy gets a little back heavy. Given the shape of his feet too, Nitro Convoy have problems with posing. Not that he cant get into many poses, it just take quite some effort to balance it out. He has a rather small area for his center of gravity to fall into. What would have help would be extending the length of his back heels so that they can counter that. 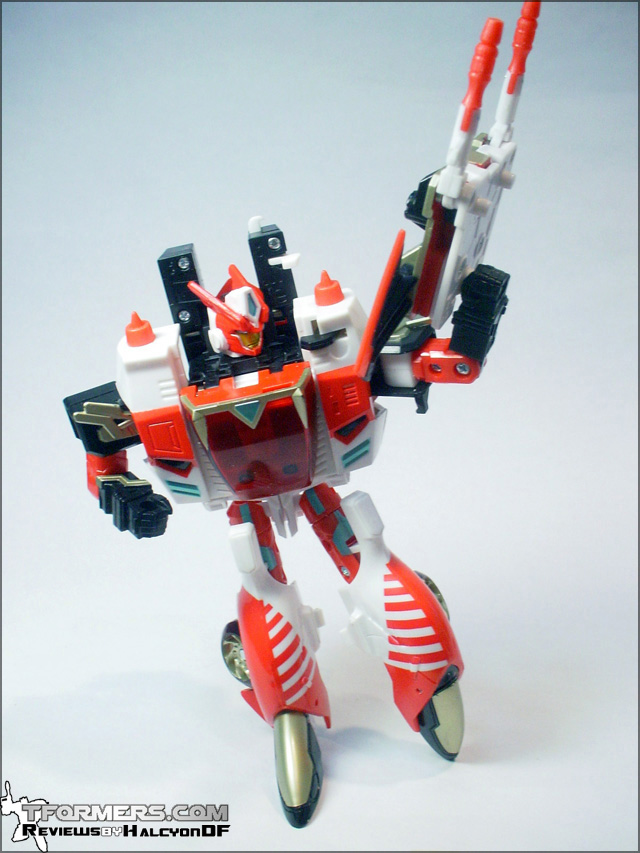 Verdict: 5/10 Well articulated figure that is a little down on the posing and his wide torso is not nice.

Ntro Convoy is a alternative-looking Transformer figure. Basically, the biggest problem would be his tendency to lean back and fall over. It is all up to personal preferences â€“ and I rank him rather lowly among other Galaxy Force Deluxe and was honestly quite disappointed when I got him. 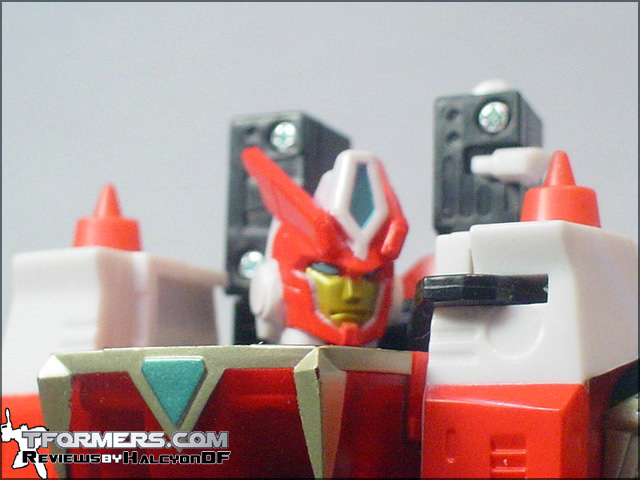