Alternate Mode
Inch Up is a purple monster truck in his alternate form. With some lime green and silver thrown in for the mix, together with dark translucent red. Individually, the colors, except silver, do not appeal to me, but I would have to agree the color combination is very nice, and with a good ratio. It reminds me of G1 Devastator but with reverse portions of green and purple. Despite being recognizable as a monster truck, Inch Up is noticeably futuristic-looking. His main body is rather flat and quite a distance away from the wheels. The wheels are also attached to each other on each side and then to the main body. 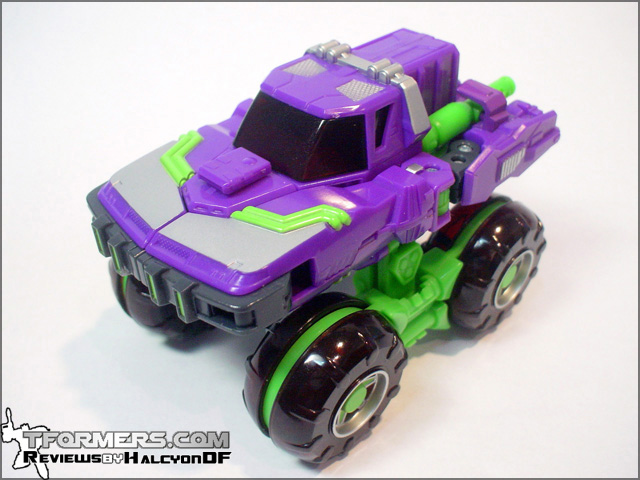 At the back of the roof are some details sculpted much like spotlights. The front also sports lime green headlights in the shape of rectangles. Talking about detail, there is a sculpt in front of the windscreen resembling a raised engine block, with green pipes running off the hood to the side. The two green exhaust pipes, which later become shoulder-mounted guns, are a nice touch. 2 L-shape pieces of the arm hold down those pipes to prevent them from springing out when the Force Chip is inserted. The two fists are also visible when in vehicle mode. They are beside the ends of the pipe. This is surely one fault that could have been remedied, a wrist guard or wrist rotation would have solved this unsightly flaw simply. The screws are also exposed on the back of the arms. 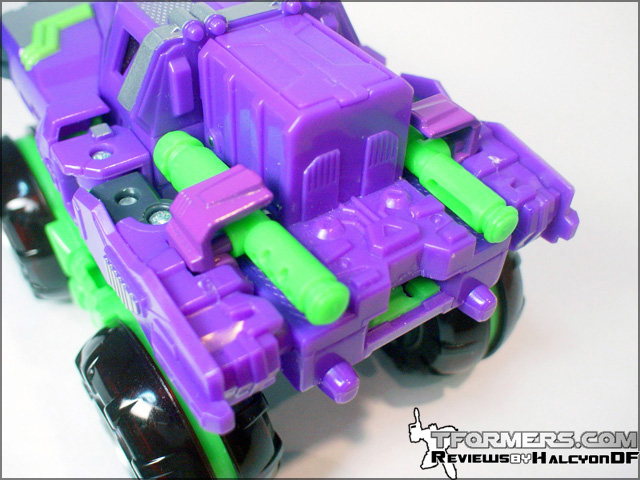 The Force Chip is in the rear of the vehicle and what it does is it extends the wheels sideway so Inch Up is wider and the body is much lower than previously. Doing so would move his center of gravity lower and surely given Inch Up much needed speed and stability. Personally, i love both the normal and ignited modes of Inch Up, maybe thats because we do not get much monster truck transformers! 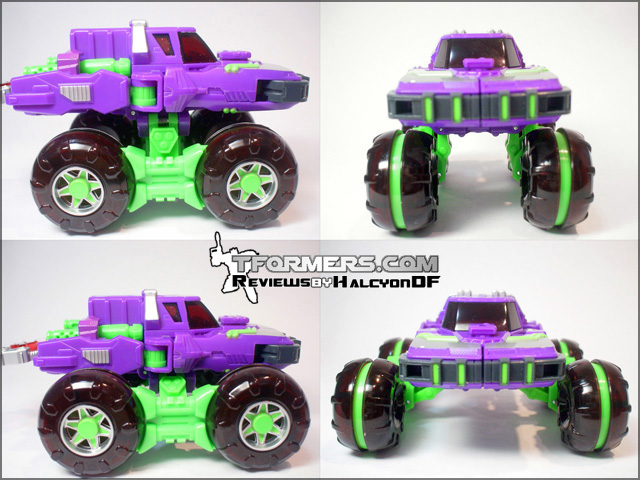 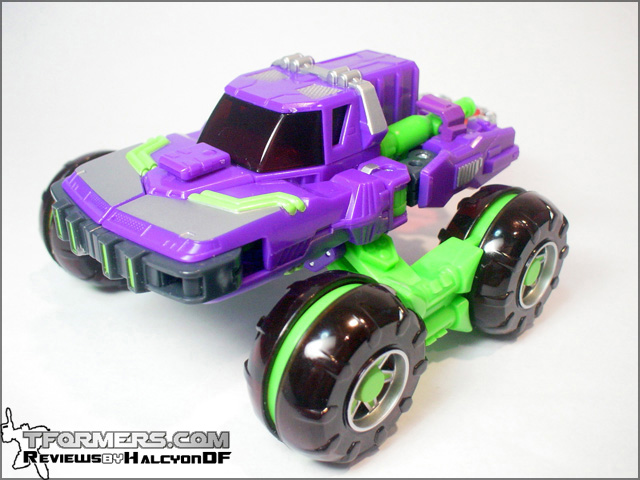 Verdict: 8/10 Good Vehicle mode, but the exposed fist and screw detracts from it

Robot Mode
The wheels must be in their lowered mode before Inch Up can be transformed. One could either use the Force Chip or could just extend the legs and then rotate them to lower the wheels (below). Inch up remains largely purple in his robot mode. 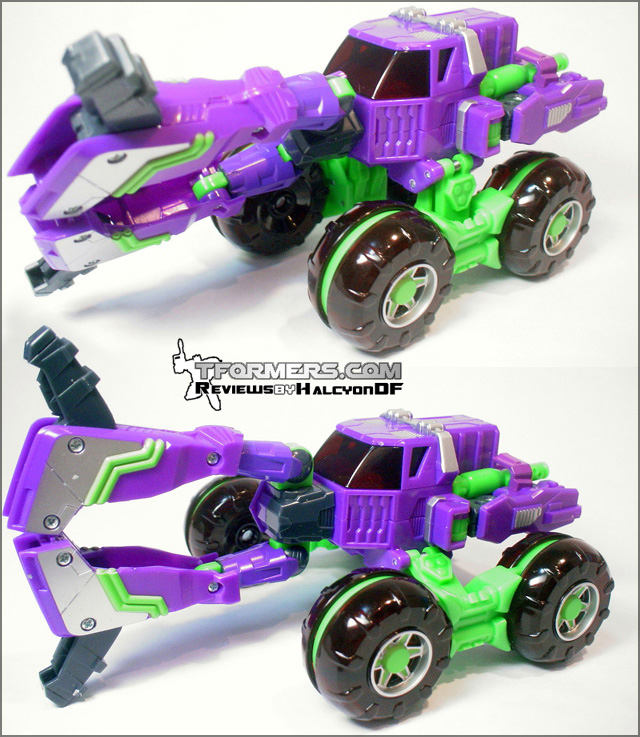 Inch up has a very nicely shaped figure for his body. The limbs are proportionate, the fists although a bit big, looks good on him. The torso is formed from the windscreen area. 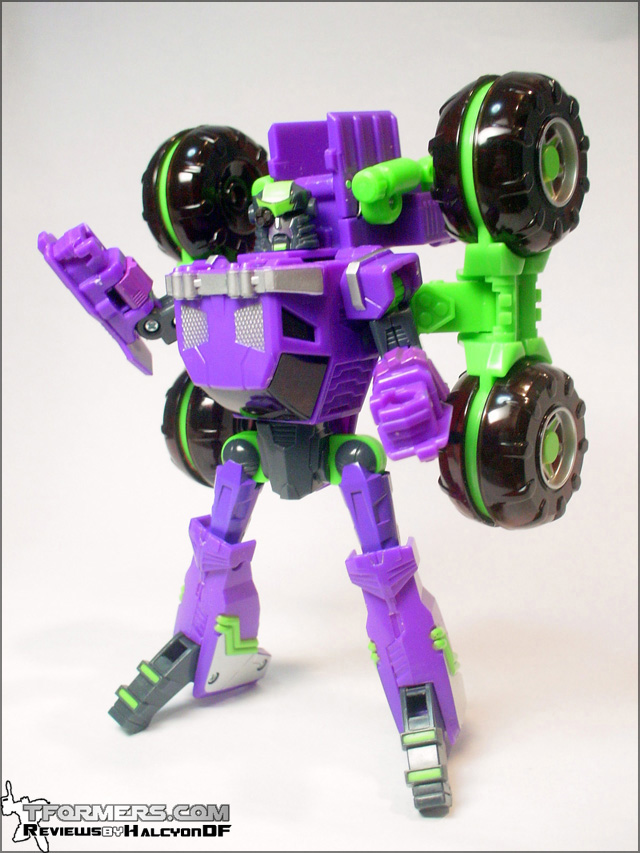 One distracing feature would be that the 4 wheels hang right behind his arms, but I guess that cannot be helped. The real flaw would be the part that rest horizontal behind Inch up head’s. I would prefer it to fold down like a backpack instead of just resting there. Talking about the head, Inch Up has a rather flat face and a bin-like head. While the back of his head is translucent red and looks to be designed for light piping effect, it does not allow light through. Was light piping intended and the designers assumed that light would pass through translucent red part? I believe so, if not, why would the back half be made of that red material? 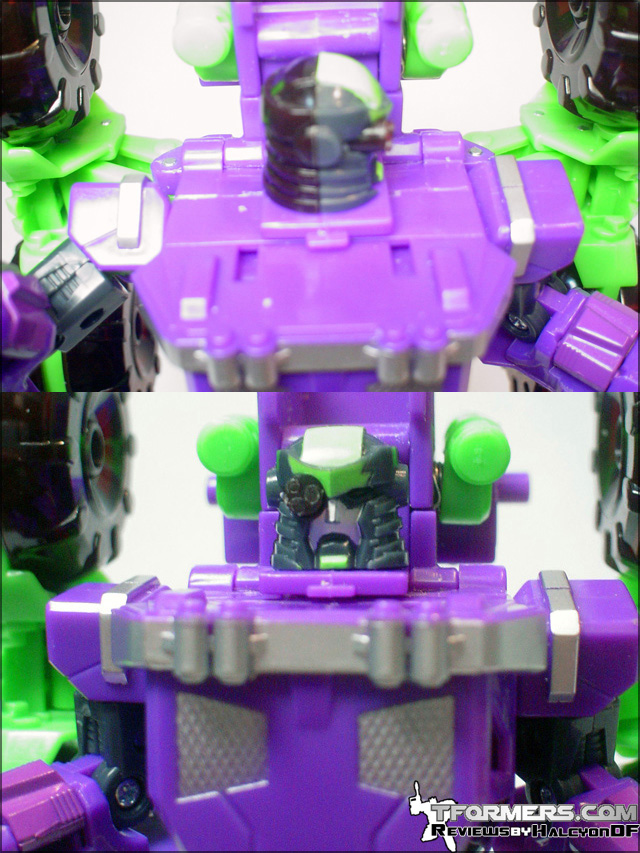 The strong point about Inch Up would have to be his articulation and posability. His arms have elbow joints; swings outwards at the shoulders and the arms rotate at the shoulders. The knees are ball-jointed and the hips have the same degrees of freedom/movement of a ball joint. The hip joints are 2 hemispheres rotating on a flat disc. The disc itself rotates along the pelvic. This type of joint is a lot more firm that a ball joint and perhaps was introduced to allow Inch Up to balance with his heavy rear weight. Despite having such a large back ’pack’, Inch up is fairly stable, as long as he does not lean too far back. His stability is one thing that is sorely lacked by one such as Nitro Convoy. 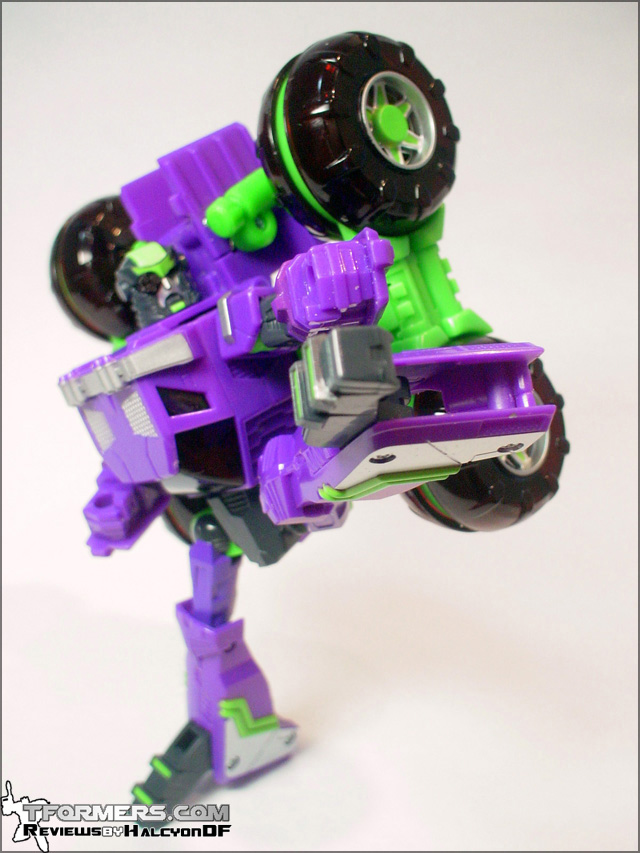 His Force Chip gimmick is a unique one. It activates the lowering of the wheels in the alternate mode but in robot mode it sweeps forward the shoulder vulcans. A few Galaxy Force Figures comes with multiple Force Chip slots, but this is the first time the same slot activates separate features in robot and vehicle mode. Truly, this adds on so much to him. What Inch Up lacks now would be an extra weapon for his hands to hold.

Verdict: 10/10 Despite the 4 large wheels hanging off his back, Inch Up is a stable figure with superb articulation.

Despite being undecided about him when shots of him surfaced on the net, it turns out Inch Up does not disappoint! Surprisingly nice for both modes, I would recommend him as one of the nicer deluxe out there right now. 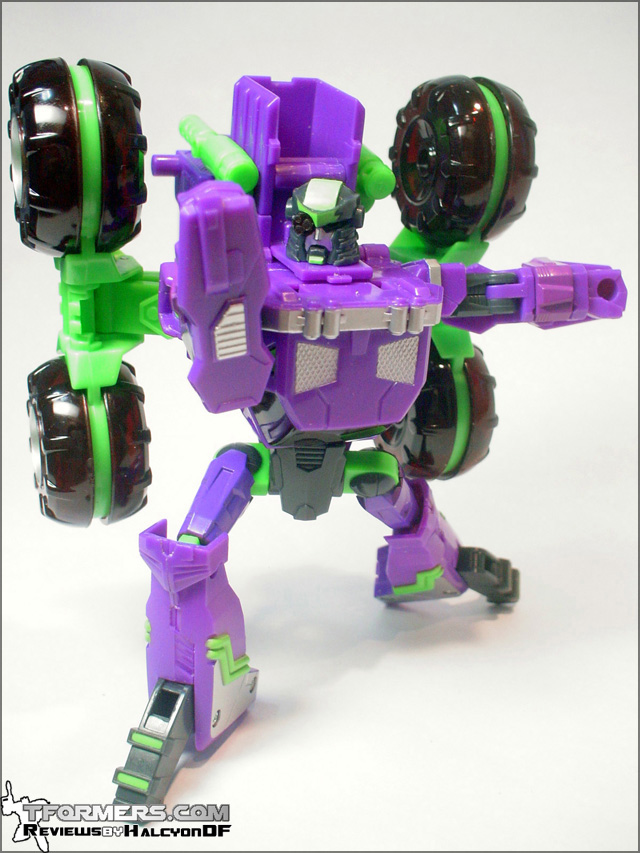