Alternate Mode
Flame Convoy is a primarily dark gray and orange/dark yellow ground dragon. Despite having colors that will do well for a Cybertron side Transformers - make no mistake - Flame Convoy exudes a regal air of evil around him. He has 4 horns on his head, which two of the lower horns are painted orange. His eyes are transparent purple and that contrasts well with the silver on his forehead. Too bad the only articulation is on the jaw. I would have loved for him to swivel his head or neck around. 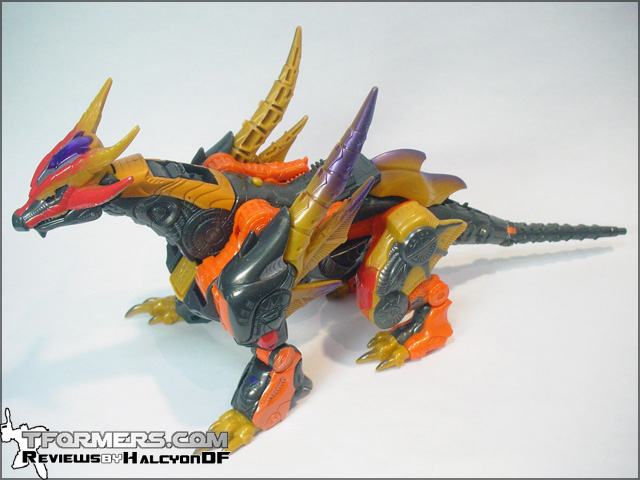 His legs are nicely sculpted too and chock full of detail. The front legs look exceptionally powerful and muscular. Two large horns and a bony fin extends from the top of the shoulder looking like wings, making Flame Convoy look bigger than he is. The tips of the horns are painted metallic purple from the tip down in a gradient. From the elbow down, his lower front limbs are shaped so muscular that they look like triangles, with one of the sides being the foot, instead of the more conventional paw feet.
His claws are also painted from the tip with a gradient spray of dark grey. Despite having only 2 articulations at the shoulder and elbow, they allow quite some range of motion, with the elbow being a ratchet joint combined with another rotation joint. His hind legs are the more conventional 3 jointed animal ‘S’-shaped legs with paw-feet. Somehow, the scales on the front parts of the hind legs and the webbing detail on his hips gives him a slight aquatic look. 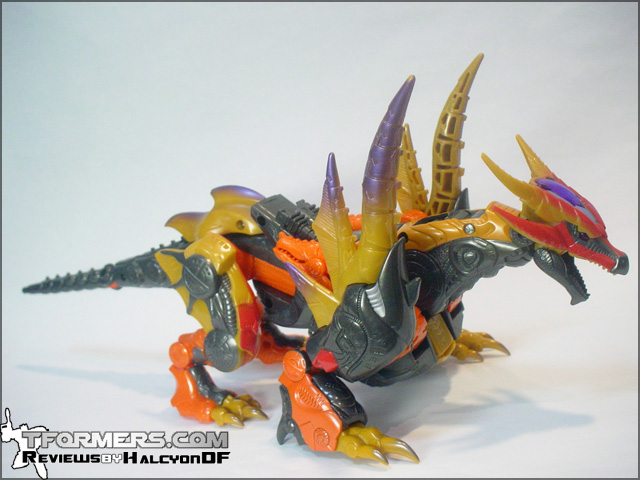 His spiny tail is long as it probably takes up 40% or more of his length. Right in the center of the tail is a ratchet joint that offers a somewhat limited poseability to Flame Convoy’s tail. At the first ‘click’ bending the tail up, the angle already looks unnatural as it is too sharp. A solution would be to turn the tail end sideways, reducing the angle in one plane. With a figure this big, one would have expected a nicer tail, perhaps, at least, one with 2 joints instead of 1. Utilizing the same type of joints, it would have remained upright when the tail is used as a weapon later on.

Flame Convoy has a button on his back just after the neck rotation joint. What it does when pressed is it makes Flame Convoy roars. The head also flashes with red light through the clear purple plastic parts in the mouth, eyes and skull top. 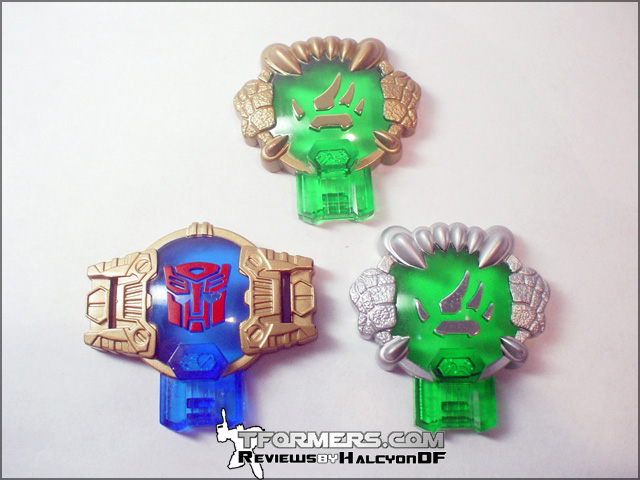 His Force Chip, similar to Nitro Convoy’s, is special to him. It is the same Animatros Force chip, but the paw print and the sides are now gold instead of silver, to denote his leader status. When inserted, two additional dragon heads swing out at the side of the main head. In addition, the good old transformation sound featured in the G1 cartoons is played, along with flashing lights in the head. I knew about the two heads but did not know it played the transformation sound too, so I was pleasantly surprised. With the Force Chip inserted in place, depressing the button no longer generates a roar, but rather a generic laser/firing sound. 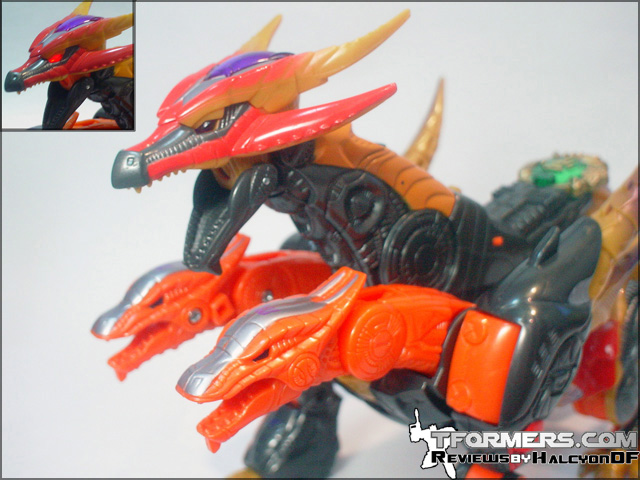 Verdict: 10/10 Due to its size and despite being quite articulated, there is not a lot of poses Flame Convoy can get into. Although so, the intricate and detailed sculpt that is Flame Convoy more than makes up for it. He is one of the nicest Dragon Transformers in my opinion.

Robot Mode
Flame Convoy looks every bit as regal and evil in robot mode as he does as a dragon. The horns on his shoulders now are spread out, facing the front, giving him some awe-inspiring shoulders. 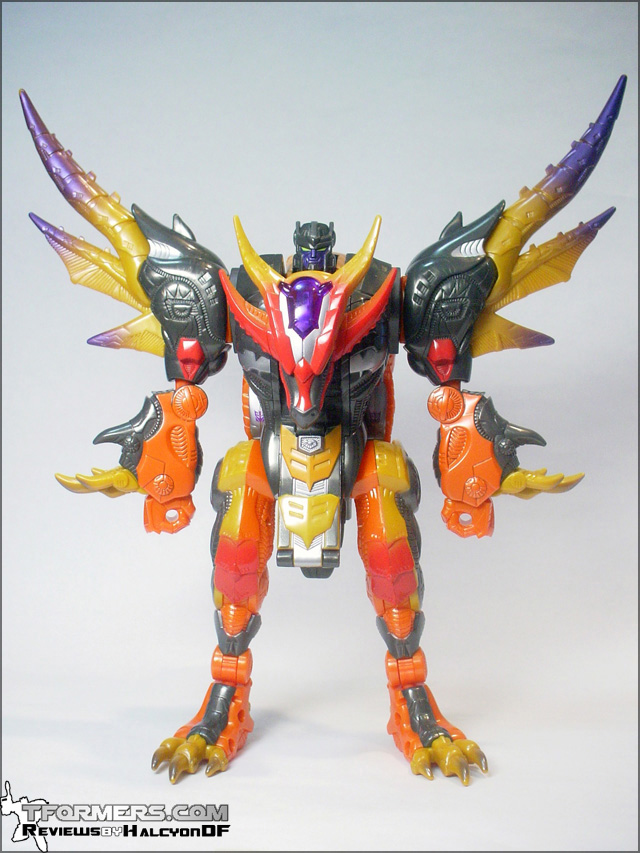 The claws on his front feet come together on the sides of his arms. Together with his horns, makes it look like flank attacks would not work on Flame Convoy. He ‘wears’ his dragon head on his torso like a trophy and he has a pelvic guard that resembles a tribal skirt/clan war flag all the more adds on to his savage look. 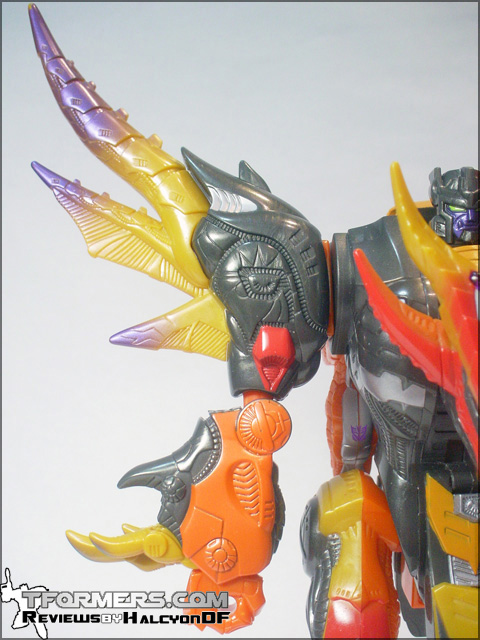 The top of the head resembles Galaxy Convoy’s own. But the face cannot be more off. Flame Convoy’s face is purple - the same color as the purple on the horns – and ominous lime green eyes. He has a mouth with two fangs showing from his lower lip. His head can be rotated sideways, but due to transformation, his head can also move up and down slightly (while not affecting the sideways rotations). His head rest on a torso that is muscular in appearance. The armor plating on his chest actually reminds me of the black creatures from Aliens. 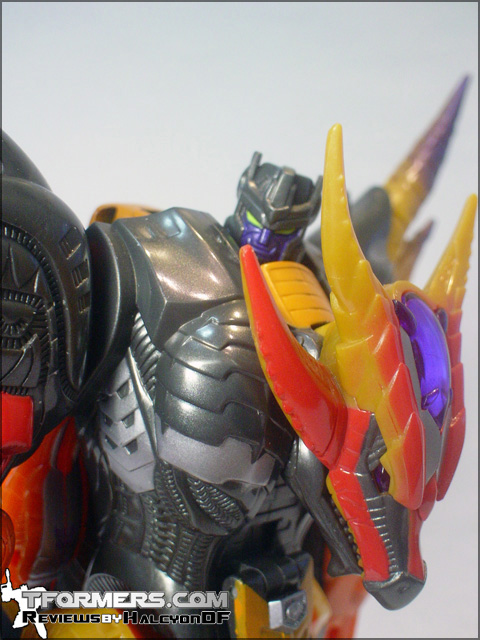 Flame Convoy, like most Animatros (and BW/BM) releases, is one who stands on his hind legs. The only difference is that the legs are now straight and the heel claws are flipped up to give him a slightly wider feet area. Once again, I do not really mind this, as I would take this over some weird contraption of turning legs into legs that do not resemble one another.

His tail is now a giant battle axe, brutally fitting for Flame Convoy. The official transformation of the axe has the spike pointing upwards; however, I prefer to lay it flat much like a continuation of the axe blade (below). I personally find this way much more pleasing. 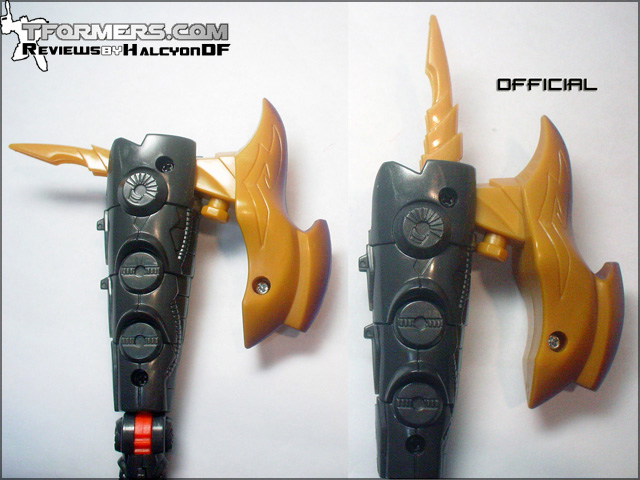 And talking about his weapon, we come to the one feature of Flame Convoy that can make or break him for one. The 2 articulation points in his front dragon legs now wreck havoc in his robot mode. The whole arm rotates at the shoulder, but do not move out sideways. The elbow rotates up/down, sideways. If his upper arm is bent up, the fist hole faces the side hence, the number of ways to pose Flame Convoy with his axe is very limited, which is sad, because it would have been fun with his giant axe. If only his wrist was articulated, it would have alleviated the problem. 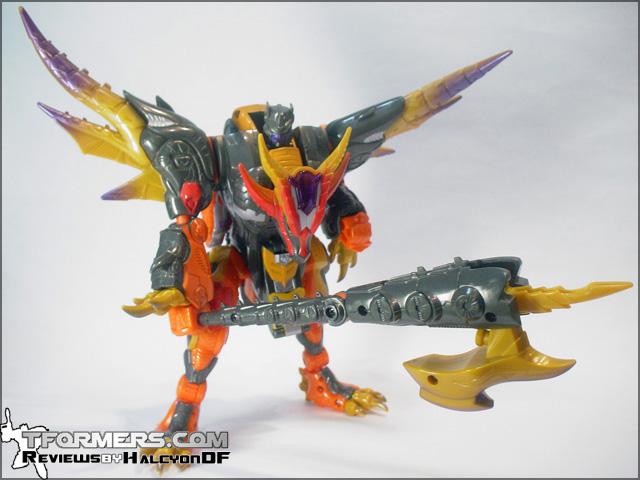 His Force Chip activates the two dragon heads (and the transforming sound) as in the alternate mode. This time round, the heads can be lower to face the front, for they are now flamethrowers (at least according to the show). The heads are rather uniform in width, and have a Destron symbol each on the head. A silver line runs through the top of the head and both heads have purple eyes. Also, both heads can close and open. The upper jaw, together with most of the head is spring-loaded which means they remain open while untouched. 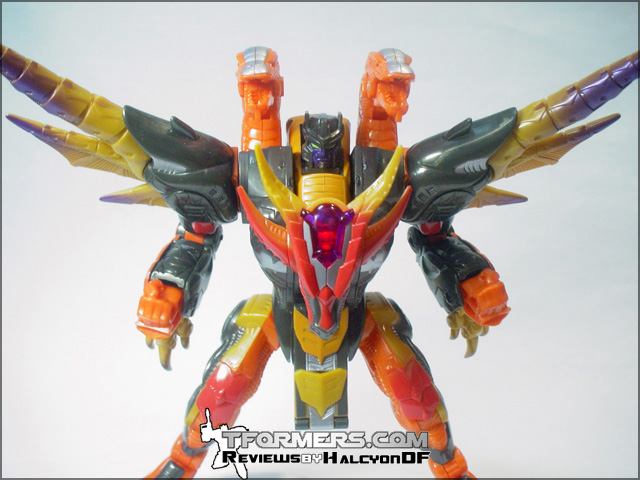 Verdict: 8/10 How sad that his arms take away so far from Flame Convoy. Would a square fist that rotates cost a lot more?

If you are going to display Flame Convoy and not fiddle with him, he is a must-get. As a toy in terms of play value, his arms’ articulation really hurts. As if to compensate, Flame Convoy comes with lights, 3 sounds and the normal Force Chip gimmick. Like Nitro Convoy who has a semi transformation which is a non Force Chip gimmick, Flame Convoy has sounds and lights triggered by the button on the back. An interesting thing to note is that only Convoys so far has features not triggered by the chips. 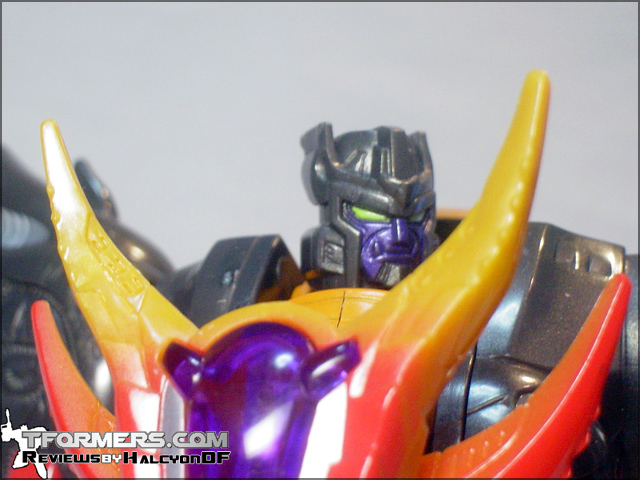