Alternate Mode
As his name suggest, Fang Wolf is a wolf of course. Taking on a palette of pearly off-white, dark and light blue and yellow, Fang Wolf has a great color combination. I personally love this color scheme. He also looks like an update of the G1 mechatronic-look of the beast Transformers. Fur is detailed on the back, back of the head and on parts of the legs. 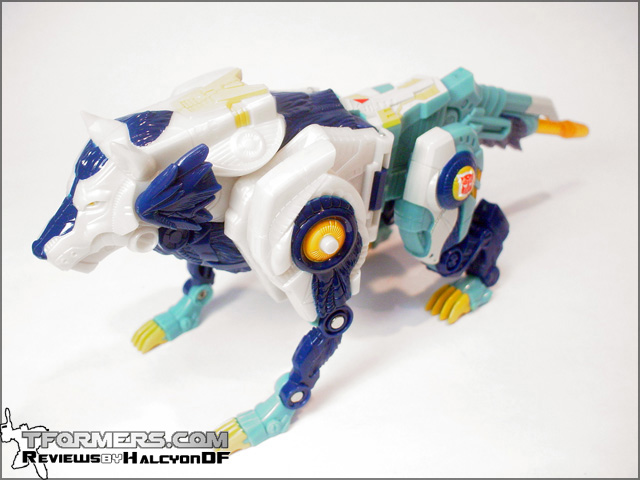 I am a little disappointed with the head of Fang Wolf. Iâ€™ve seen better looking wolf head sculpts and the center dark blue line across his head does not help as it makes the white looks more washed out. The centers of the eyes are painted yellow where the surrounding area is white. With all the full colored eyes of the other animals, youâ€™d thought they would have colored the whole eye yellow, which would have been much better. There are two unflattering tuffs of dark blue fur at the sides of his side that is part of the Force Chip function. 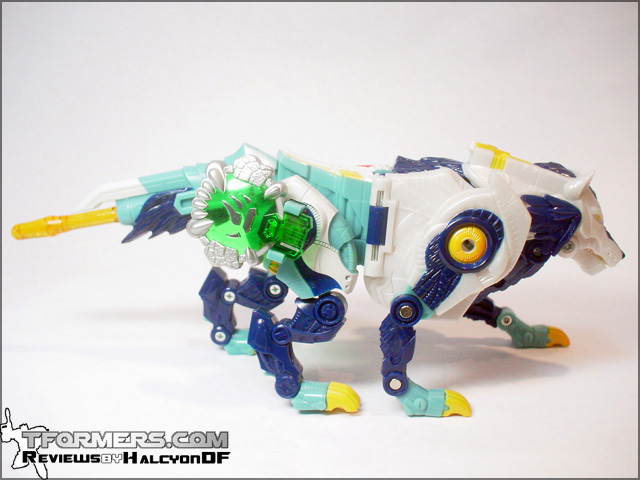 Inserting the Force Chip, the two tuffs of fur moves up, as if Fang Wolf is agitated. His jaw also opens up and clear crystal fangs appear from his upper jaw. However, they are actually in an anatomically wrong position! The fangs should be drawn from the under his snout (as like in the show), rather than from the back of the upper jaw. Unlike most Galaxy Force figures released so far, only Fang Wolf has a Force Chip slot that is not meant to keep the chip in while â€˜ignitedâ€™. In other words, the jaws open as long as you hold the chip in. 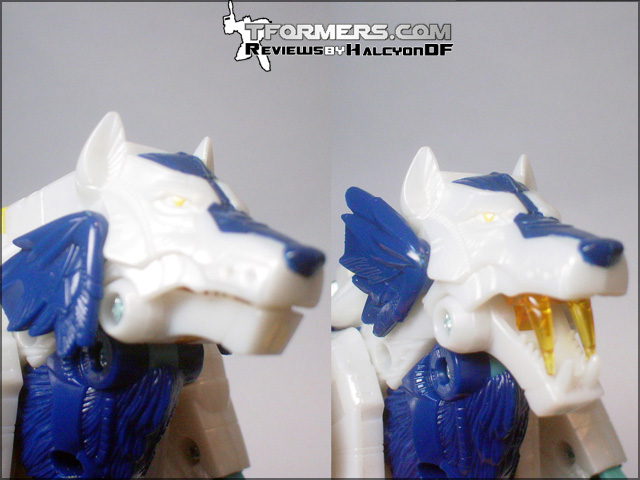 To compensate the slot being unable to hold the chip, there is a slot on his right hind leg that holds the chip in both modes. Does it make up for any thing? Not really. I am never a big fan of force chips but am okay with it as long as it does not affect too much of other features. I would actually prefer the mouth of Fang Wolf to be able to be left open. Changing the force chip mechanism to an unlock-once one (like most of the others Galaxy Force figures) should not be hard. In fact I have no idea why such a mechanism was chosen for Fang Wolf.

It would have been cool to be able to leave the mouth open, as it would convey quite some emotion and aggression coupled with the articulation of the legs. Each leg has 4 points of articulation, all each with a wide range of freedom. Neck articulation was probably made impossible due to the slot too.

On the left side, the left hind leg have (in place of the slot) a small Cybertron Faction Symbol. And to end things off, I love his tail, which later becomes his weapon. The end of the tail is a transparent orange missile, which is pretty cool. 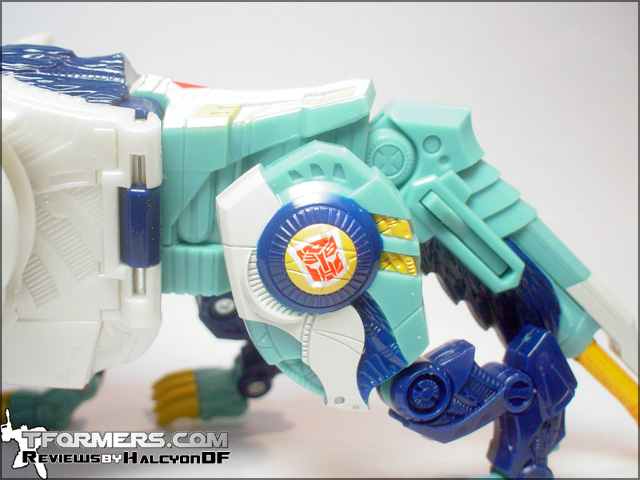 Verdict: 6/10 Cool colors and great articulation marred by a weak force chip that forces other features to be sacrificed.

Robot Mode
The first thing you would notice about Fang Wolf is that he uses the hind legs as his robot legs. With both modes utilizing legs, you cannot really expect anything else. Some other method would have probably given him some weird looking legs or parts hanging around. At least Takara made the effort to distinguish the legs in different mode. The lower leg is rotated 180 degrees at the knee and there is a heel for Fang Wolf to balance on. Despite having a small range sideways for his legs, Fang Wolf can be rather stable in many poses. 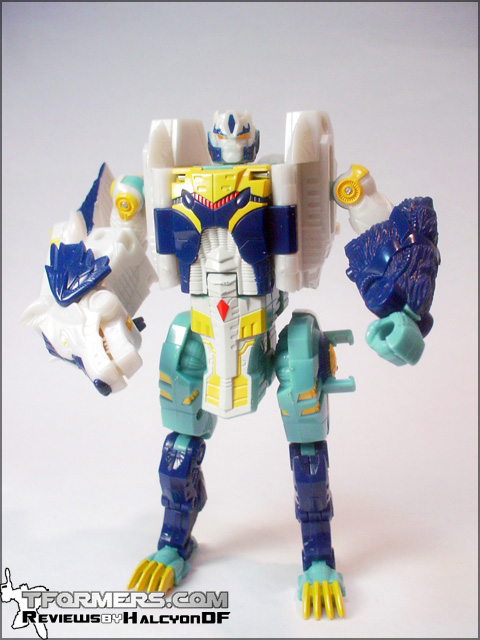 Generally, besides his wolf-head arm, Fang Wolf has quite a proportionate body, rather pleasing to look at. His head is plain off-white with blue, rather like his animal head, and like it, his robot head has the details washed out due to the white. His head is a semi wolf/humanoid combination look that bears more than a striking resemblance to BW Fuzor Silverbolt. His chest and torso are nicely designed and are quite detailed. 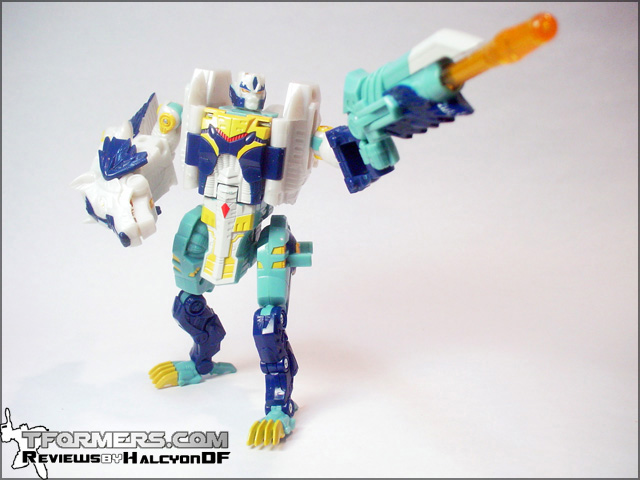 His arms are articulated well, but they can be cumbersome to pose due the 2 joints (disc and rotation) in the shoulder and the elbow. Also one of his arms is a wolf head. The Force Chip does exactly the same thing in animal mode, and restricts all the same. Fang Wolf would have been able to strike some menacing poses with an open jaw, but sadly that is not to be. 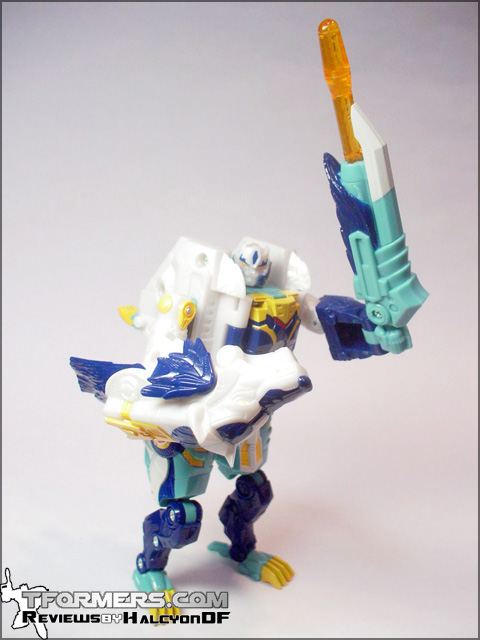 Fang Wolfâ€™s weapon is an intriguing piece. First off, it can be held like a gun, for it launches a missile. It also can be held like a sword, upright, as it has a blade edge too. All that is needed is to rotate the handle. Despite being only able to hold it officially in his left hand, I came up with a way for his right hand to hold the weapon as the sword. Open the jaws with the force chip mechanism and then insert the handle right in between the two lower fangs. 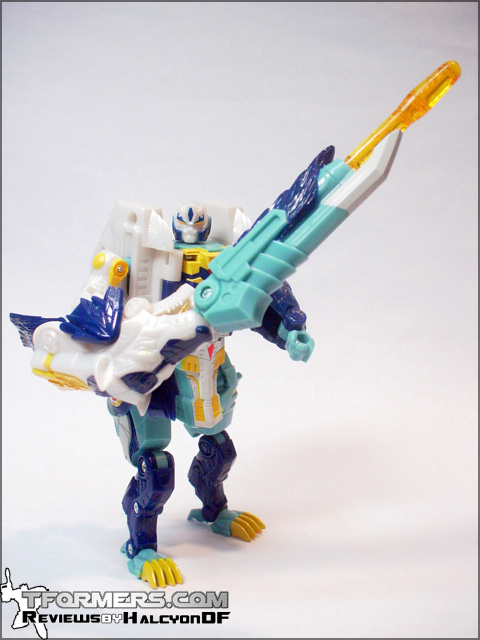 Fang Wolf is a good figure, but he had a lot of potential that was unfulfilled, especially with the force chip mechanism.