Alternate Mode
Noise Maze is a sleek futuristic stylish aerial attack vehicle. He is mainly black with silver for the front and wings; dark gold for part of the fins and sides and bright orange mainly on the underneath. Lime green is also used, but very sparingly, thankfully. The whole plane is delta-shaped, with two swept forward wings. Between these two wings, there are 2 swept-back â€˜spikeâ€™ fins that properly serves as tail fins. Noise Maze definitely scores with this great looking mode. 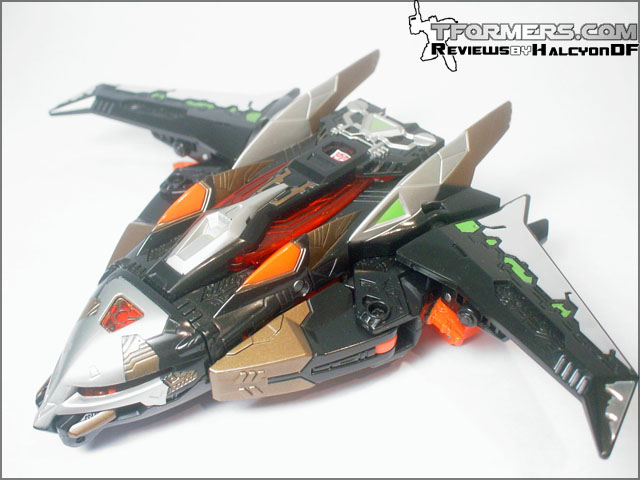 Looked head-on from the front, Noise Maze cockpit section looks vaguely like a face, given the sharp angled-upwards red cockpit windows and the faux fangs at the tip. It reminds me of the demon masks in the Japanese theatricals. Two golden patch of engraved detail, resembling circuit lines, are situated about the cockpit looking like painted eyebrows. The black paint applications beyond those gold details also look like horns, furthering fueling the resemblance to Japanese theatre demon masks. There are also many patches of â€˜wave-likeâ€™ detail on Noise Maze just like Vector Prime However, the one on Noise Maze are somewhat updated a little to resemble circuit lines. Many of such details can be found all over Noise Mazeâ€™s body, but being largely unpainted, they do not stand out. 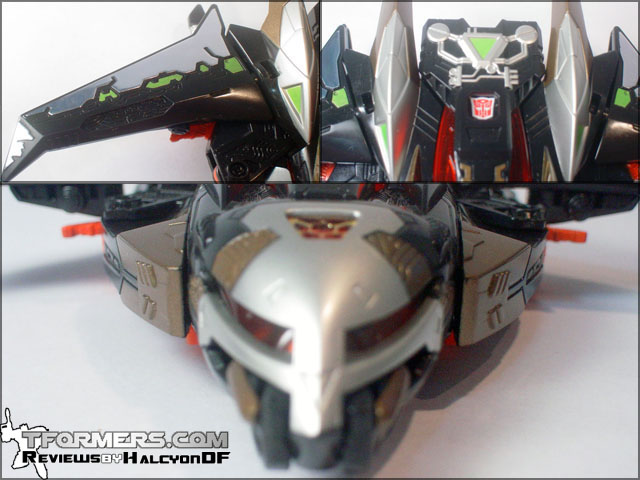 The wings are swept forward in an angle, and the wing tips are angled even more to the front. The front halves are black and the rear half in shiny silver, almost chrome-like. Silver is aplenty on Noise Maze, but only the applications on the wings are shiny. It has been so long since they have put shiny silver/chrome on a mainstream figure (non Binaltech) that it brings a smile to my face. The center of the wings, between the black and the sliver, appears to have â€˜broken up tilesâ€™ that are bright green scattered along the line. Great looking wings, but they are a bit loose at the point they connect to the main body. Even as the wings can be taken off later on, I would have preferred a tighter connection like something that would have clicked.

The Force Chip slot is located at the rear of the central portion. It is highly detailed, with the circuit wires raised and painted silver, and all of them leads to or connects to the central silver triangle that is painted lime green in the center. There is also, in default position, a Cybertron Faction Symbol below the slot. Unlike most other Galaxy Force figures, the force chip portion has to be â€˜preparedâ€™ before ignition for all his features that are activated by the chip to work. The central portion must be lifted up a bit to give clearance to the blades. The Force Chip unlocks four transparent orange blades that sweep forward. If the chip is kept in the slot, the Faction Symbol also changes to a Destron Faction Symbol. Remove it, and Noise Maze reverts back to being a Cybertron. Also, given the way the hinges are built, the center portion can be pushed forward or slightly backwards which is totally up to personal preference. 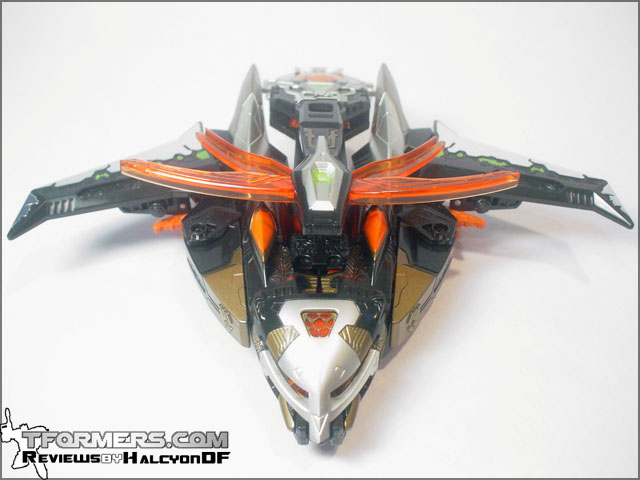 If Thundercracker is the peak of realistic looking transformers in Galaxy Force, then I say Noise Maze is the pinnacle of alternative futuristic design for transformers. And despite being styled in such a futuristic nature, Noise Maze also have plenty of throw back to Japanese culture and history in the form of references to wave paintings made famous by Hokusaiâ€™s and the demon mask, much like the references Vector Prime too.

Robot Mode
As sleek as he looks in vehicle form, Noise Maze looks just as good in robot form! More orange is revealed in robot mode, besides that, the colors are kept largely the same. The black, gold and silver would look good on any Cybertron, but the Destron-hinting bright orange reminds us that his loyalty remains ambiguous. 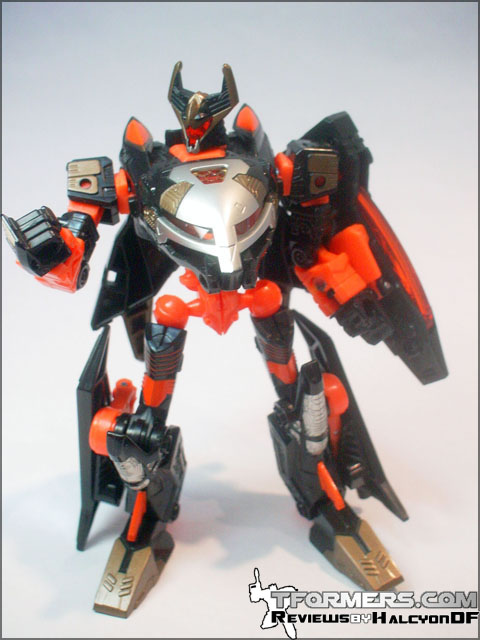 Noise Mazeâ€™s head has to be the coolest head I have seen so far. Shaped like a helmet with two large horns on each head, his head is also hinting at his devilish nature. The sides of the horn pieces are colored dark gold. The face on his head is absent, replaced by a transparent orange part. This has to be the nicest feature of Noise Maze in his robot mode! If you place a light source behind his head, the orange part glows ominously. His facial area also looks like gaping laughing fanged jaws. His torso is formed from his cockpit and it does stands out â€“ literally. Like Backpack, the front of the vehicle mode becomes the chest, but Noise Maze is much more tolerable as it is streamlined towards the top. The tail fins also hang off his back much like wings kept folded, adding to his devilish image. 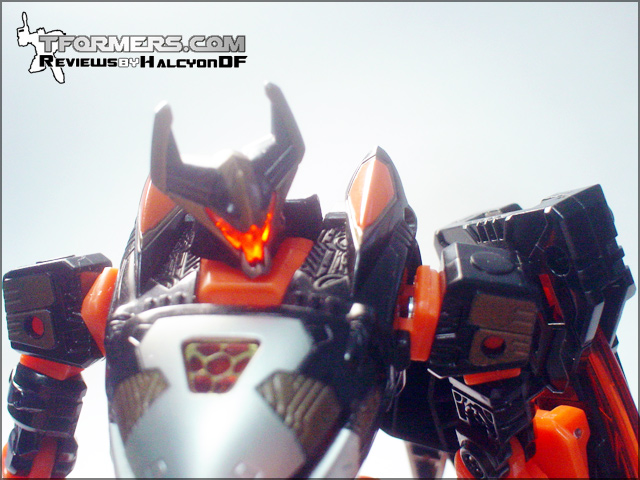 Also, he is one of the most articulated and poseable figure in Galaxy Force yet! His arms have 5 joints each, rotating at the shoulder in two directions, a mid-upper arm rotating joint and a wrist and elbow joints. His legs are articulated at the hip with ball joints, mid-hip rotation, knees and ankles (front feets and heels) articulation. If Noise Maze had a waist joint, he would be the most articulated figure I have ever seen! Even then, Noise Maze is so well articulation and stable that you can get him into a wide range of poses, and I do mean wide. 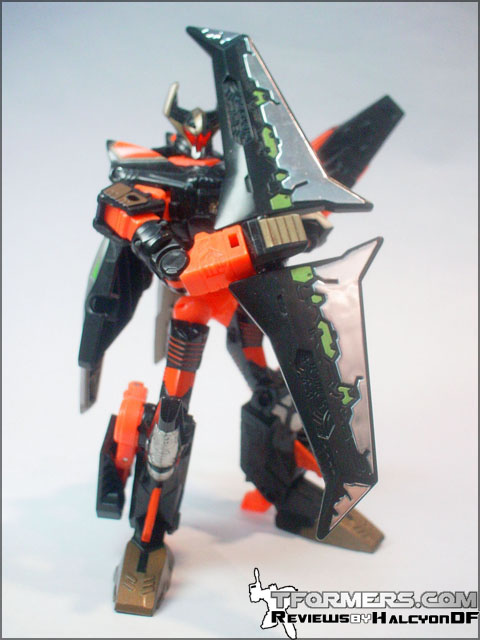 His hands are rather uniform in width but alternating between black and orange, they do not look dull. The outside of the arm has some tech detail going on and with fist guards too. The inside however, has some exposed screws and joints, which is not that great to look at. Now on to the legs; you have got those lovely straight cut lines painted orange on both side of the thighs, which helps bring out the shape of the thigh. The knee guards themselves are rather tall, almost reaching hip height. The knee guards are probably the highlights of the legs, with etched patches of detailed that resemble those of Vector Prime the most. He also has big feet so as to speak, with a golden heel each, which allows Noise Maze to be very stable. The inner side of the legs continue with those circuitry details that are unpainted. Its on the outside too, but those are obscured by the wings that fold up besides his legs along with the landing gears. 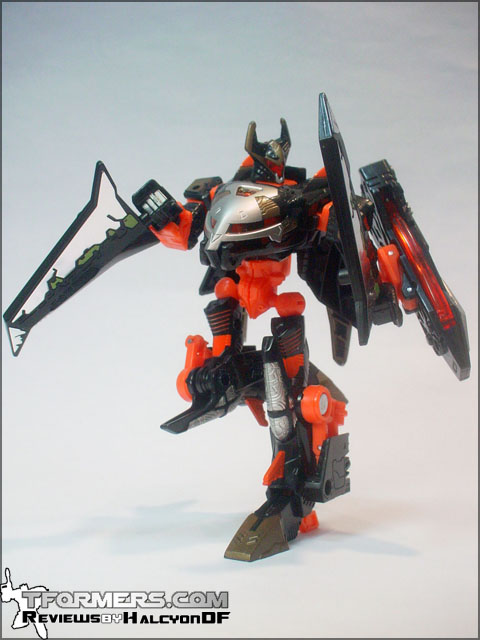 Noise Mazeâ€™s wings are removable and can be used as weapons. They can be held individually like sabres, or held in the same hand like a complete blade. With the silver side looking like blades, this weapon is pretty sweet. His left arm holds like a shield the central portion of the plane, in other words, the force chip portion. Unignited, it looks like a shield (and it rotates too) but when ignited, the blades draw out, looking like another close combat blade-type weapon for Noise Maze to use along with his other weapon. The sweetest combination would have to be igniting the shield and holding the other weapon in the same hand. It looks like some crazy crossbow! His force chip certainly is interesting. It is transparent orange and silver on the sides. In the center is a embossed Destron faction symbol and the top edges are adorned with stylized detail that looks like the Destron symbol, while the bottom resembles part of an inverted Cybertron faction symbol. 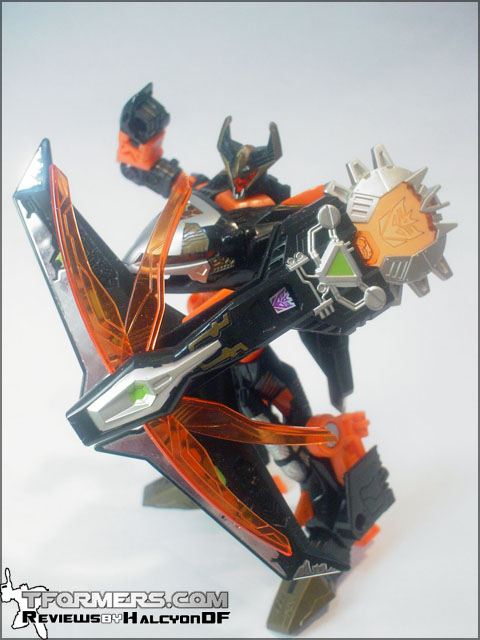 Verdict: 10/10 well articulated figure that comes with a wide array of weapons combination!

Noise Maze looks like a polar opposite of Vector Prime, more than just opposite colors (click here for a color comparison with Vector Prime). While Vector Primeâ€™s head is easily identifiable as the Cybertron faction symbol, Noise Maze has a head that resembles the Destron faction symbol, but much more stylized, with the 2 horns and triangular face, the similarities are subtle but existent. Figure-wise, if you loved Vector Prime, then you would also appreciate Noise Maze! Noise Maze is a great addition to any type of collection. He definitely does not disappoint!