Well I must admit that as soon as I saw the first unpainted photos of Galaxy Force Live Convoy I got excited. He seemed tall and imposing. The blades hooked to his Forearm, rather than being carried in his hand like traditional Helicopter Transformers and his large wings made him look like one bad robot. It has been a long wait since those original photos, but I have finally received, opened, transformed, and thoroughly enjoyed this Transformer. 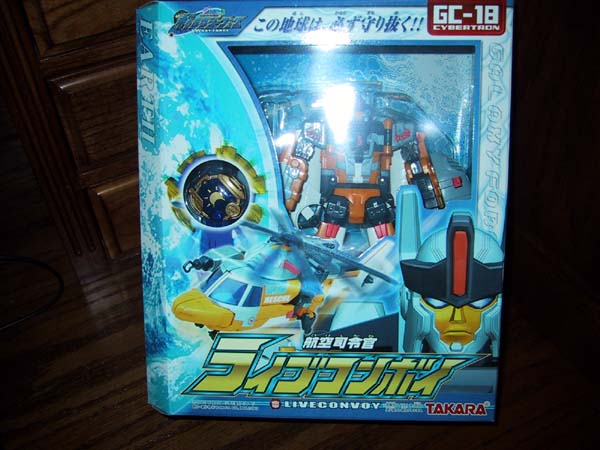 There have been other helicopters named as the inspiration behind Live Convoy, but with his missile launchers looking liking engines coming out the back, his long body and nose, and wheeled landing gear, Live Convoy strikes me as a modification of the Bell 430. 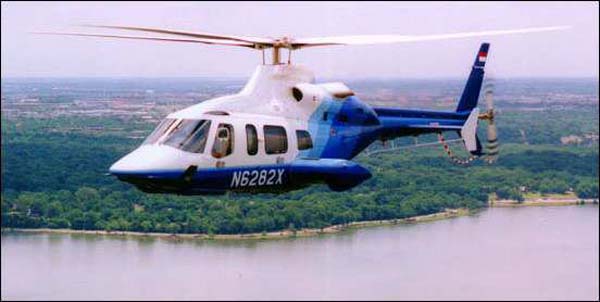 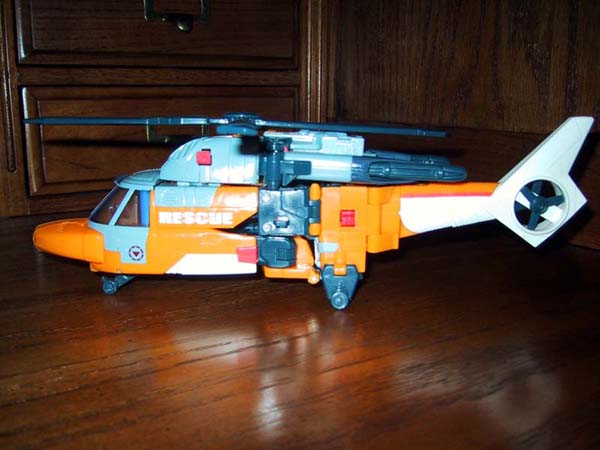 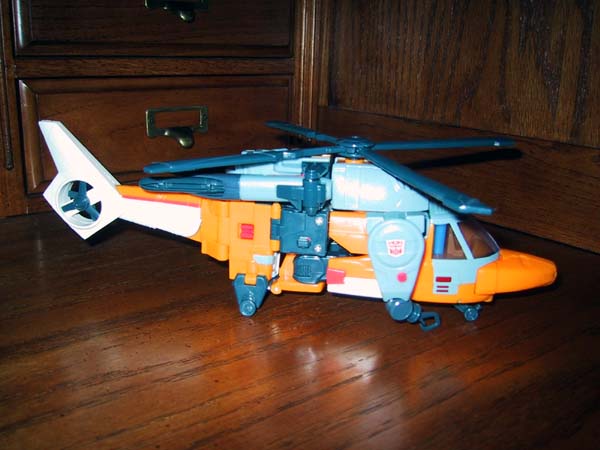 Live Convoy’s paint scheme doesn’t look as good in Alt mode as it does in his Bot mode. The Yellow, White and Blue are a little too piece meal for my tastes, but it isn’t terrible. The windshield of the Helicopter is clear and you can see two seats inside. With “Rescue” written down the right side and a large crane hook hanging off the left, it is little doubt of this vehicles intended purpose as a Rescue Helicopter. However, as Earth’s protector and supposed fighter against Destron spirits back in the day, it would seem that a more menacing “Airwolf” style color scheme and purpose would have been more prudent. I’ve even dropped a hint or two over in the Tfans Custom/Kitbash forum that someone with better talents than I should do just that.

His Force Chip inserts in the middle of the backside of the Helicopter and swings his two massive cannons around to deal his enemies deserved carnage. I have not pictured it in Alt. Mode because most have seen those pictures. I will however show the cannons with the force chip inserted in robot mode. Here is a quick look at Live Convoy’s Force Chip with all the other Convoy Chips. 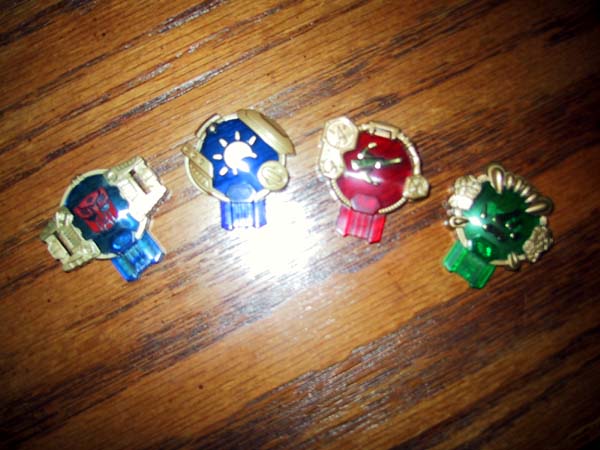 There is a small gap just past the mid portion of the body on both sides. This is where his legs connect with the torso in robot mode. The gap doesn’t look great but I am actually glad it is there. It is the only way I can find to separate him for transformation. This guy is incredibly tight and his limbs click into each other very well. No flimsy pieces at all!
All in all, his Alt. mode is a good one. I have loved Helicopter Transformers from the day Springer first hit the scene back in the mid eighties. In my opinion, although not warlike, Live Convoy rates up there with the best of them. Alt Mode: 4/5

Although his Helicopter mode is commendable, Live Convoy’s Robot mode is where this mold really shines. The very first and most impressive feature of this Bot is his face. He looks like a serious and focused leader. With glowing blue eyes and a determined set to his mouth, the accompanying horns and cheek shields make him look more a leader than Optimus Prime’s canned mouth piece does. His features look distinctly like the Prototype images of Primus’ face as well. 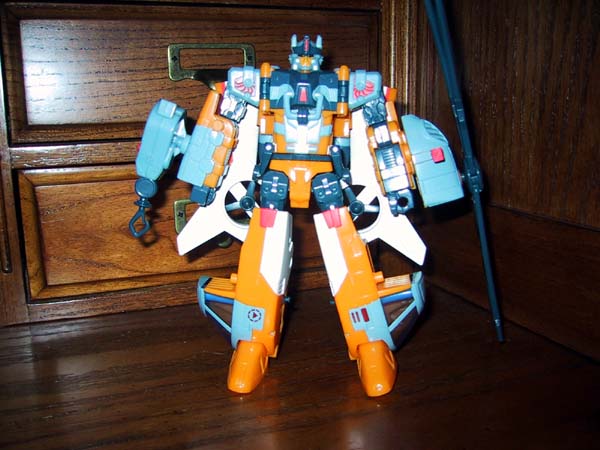 His chest is well proportioned and coupled with his wide shoulders make him look strong and able to handle even the toughest Destrons. I am glad they put the dark blue paint aps on his chest as a light blue dominance here would have made him look distinctly feminine to me. On each arm sits a tool/weapon. On his right the Crane/Grappling Hook sits ready to be used as a whip or rescue tool. On his left forearm rotates the massive blades of the helicopter. These take the form of a two sided sword or can separate and spin to form a deflector shield. As mentioned before, I believe this is the best place for the blades and is a welcomed change from the standard “hand-held” blades we get with many other modes.
Live Convoy’s lower half holds the windshields to the helicopter on either side of the lower legs. These chuncks of plastic seem out of place and scar an otherwise extremely well proportioned and esthetically pleasing mold. However, I’m not sure what they would have done with them otherwise. 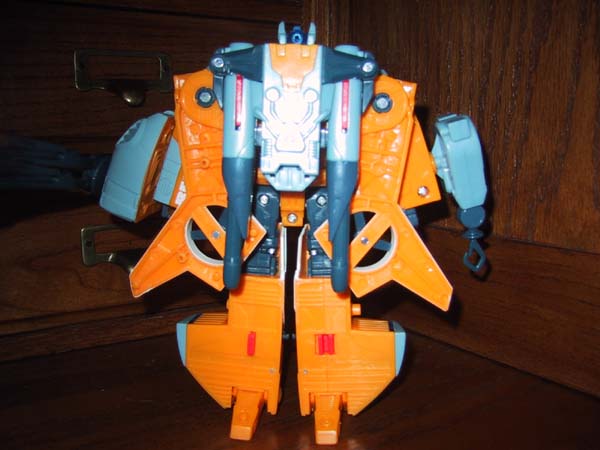 The backside of Live Convoy is somewhat plain with a great deal of the yellow base color showing through. Although, because most of us do not get a kick out of displaying our Bots turned around, this isn’t a big thing. The feature I most like here is not the twin cannons that will pop up upon insertion of the Force Chip, but actually the two halfs of the rear of the Helicopter. It took them 20 years to figure out how to do something right with the tail of a Helicopter mold. The two halves separate and have two posable positions. Above you can see that I have them in the down position, much like the cloak effect that Vector Primes wings have. This is how he comes packaged. However, push them up and they become massive wings that truly add to this Bots character. 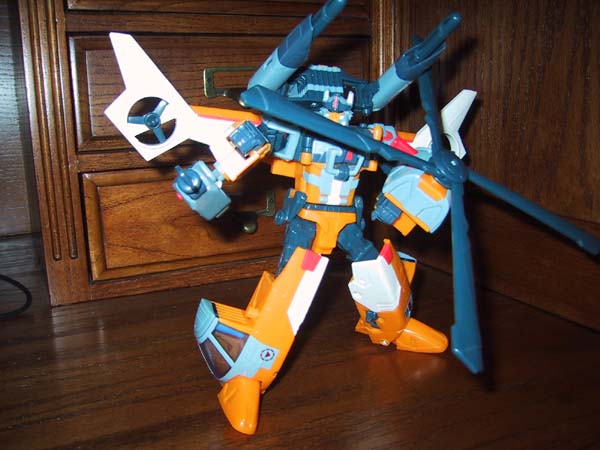 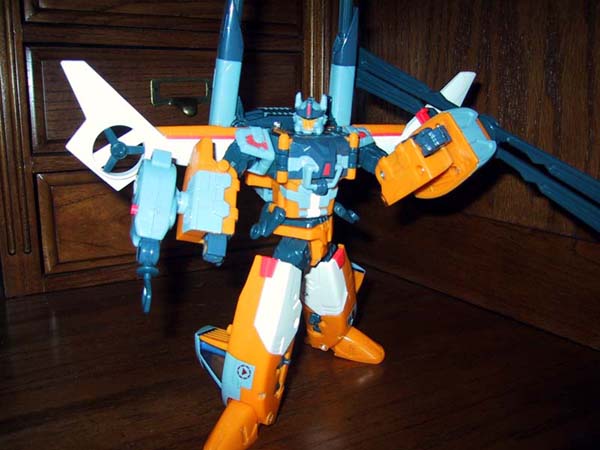 As I count it, Live Convoy has eighteen points of articulation. His head swivels, each arm moves at four different joints each, his hips swivel, and each leg has 4 points of articulation including the heel/toe combination. To say the least, he has great articulation and is very posable. See the pictures above for just a couple of my favorites. Robot Mode: 5/5

When it is all said and done, I think Live Convoy is one of the best molds in the Galaxy Force line to date. He is the last Galaxy Force figure I will buy until Soundwave and Primus come out. The rest of the line will be purchased under the Cybertron/Hasbro mark. Live Convoy did not fail to disappoint. My only complaints, which are small, are that there was even more that could have been had out of this mold.

#1. I would love to see a repaint/remold in more menacing colors and military oriented.

#2. I would have made the Crane and Blade mechanisms removable from the forearms. Although they look good there, I would have liked to seen a more clean look to the bot if I wanted to display him that way.

#3. Some paint apps to the back could have been added.

So in the end, my only dissatisfaction with this mold was that as good as he is, there is still more potential. I would recommend him to anyone on the fence about purchasing him and especially if you love Helicopter Alt. Modes. I’m not sure I can think of another mold they have done where they have done so well at making use of the would-be kibble. Overall I give Live Convoy a 9/10.