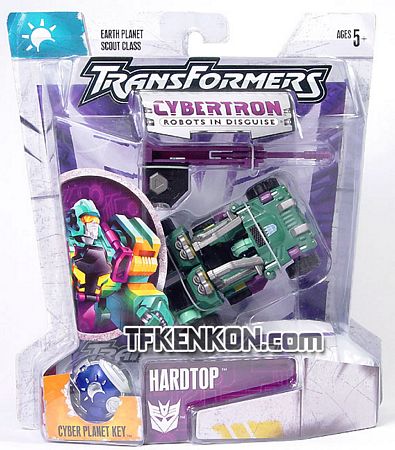 Before I start, I gotta give a shoutout to Remy of TFKenkon for the great pics from his gallery of Hardtop. It spared me from trying to attempt photograpy :D Hardtop is one of the Cybertron exlcusive figures that will not be making an apperence in the show, thus his bio and a possible appearence in the club newsletter are the only bits of characterization he has

HARDTOP has been left on Earth to serve as a spy, tracker and ground-based spotter for the aerial team of STARSCREAM and THUNDERCRACKER. He uses his impressive array of sensors not only to pinpoint AUTOBOT targets up to 7000 miles away, but also to listen to and record the treasonous whining of STARSCREAM. Though he generally prefers to hang back from the front lines of a fight, he finds a certain pleasure in taking pot shots at AUTOBOTS with his super-precise, long-range laser rifle.

Interesting touch to make him a sniper as save for Energon Inferno/Roadblock, there has been a definite drought of them in the Transformers universe. THat said, how does he fare as a figure 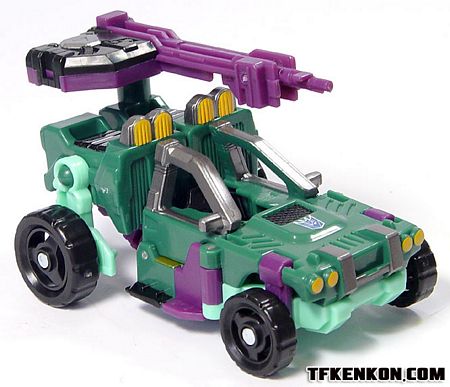 Vehicle Mode: Hardtop takes the form of a dune buggy very much like G1 Beachcomber and the cartoon design of Swindle (come to think of it, add a combining port in and this could have been a great part of Bruticus Maximus). The mix of Dark gren, purple and slight touches of light blue, silver and black work great here to show the detail of the mode. Only fault with it is that the force chip gun turett cannot be deployed in this mode as there isn't enough space for it to expand 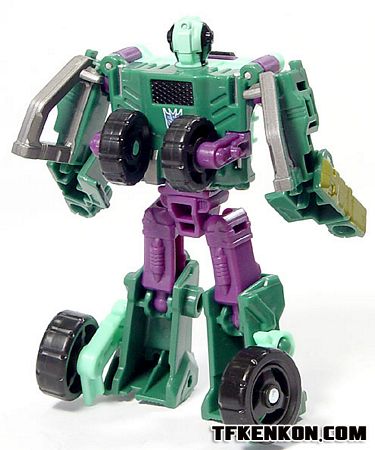 Robot Mode Seems the designers took some cues from Energon Bonecrusher/Sledge's transformation scheme as save for the wheels folding onto his back and the chest piece folding down, the transformation is very similar. This isn't a bad thing by any stretch as it is a fun one but still interesting to note none the less. It also must be said this is not a remold of those figures in any way as Hardtop is actually smaller in both modes. 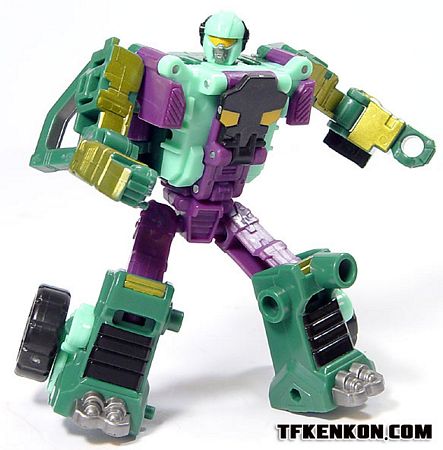 In Robot mode, a new gold color appears on the arms along with some more light blue on the chest in addition to green, purple and black. This should look gaudy but yet somehow the colors are muted just right to work. Posability on this figure is great and much like E Sledge's as he has ball jointed shoulders, legs, knees as well as waist, head and elbows for a total of 10 articulation points. Only disapointment is that he does not have upper arm swivels but he can still get a great number os poses. Molding here is excellent particularly in the head as it just screams "grunt!" 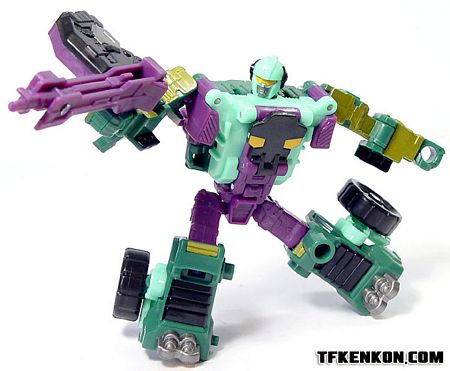 Force Chip on this figure is nice and easy as its all located on his gun. Inserting the force chip changes his blaster rifle into an even bigger sniper rifle! Not excatly awe inspiring but its a simple and nonobstructive gimmick. 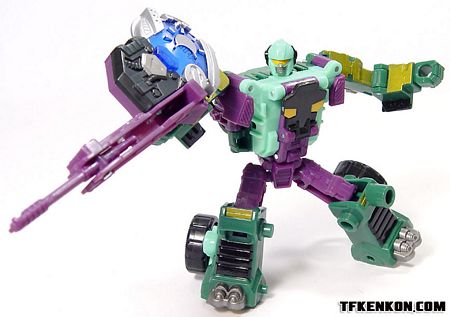 Overall For $6.99, you can't go wrong with this guy. He's got a realistic alt mode (albeit mixed with some unrealistic colors), a highly poseable Robot mode and a decent forcechip gimmick. With this line short on Decepticons as is, he is a worthy edition to anyone's collection. Only avoid if you hate the G2ish colors 8/10