Right, so Prowl. Well, it's been a long wait hasn't it. As soon as Alt/Bts came out last year, most of us had been dreaming about a Prowl one. I used to only buy alts, but I got yellow tracks, and then couple more, and boy oh boy, once you've had a couple of BT's it's hard to go back. I don't have the lot, but this line seems to have gone from strength to strength. The quality of the Takara releases really has been something else. Surely that will conitinue, I mean, why not? Unless they started changing things, but they wouldn't do that, surely....

But I digress. Finally BT Prowl is here. I was gonna wait for the Alt, but it seems he may be a way off in NZ, and I just couldn't take it anymore. So another BT comes my way. 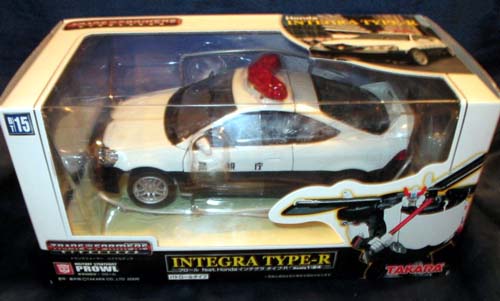 First obvious change is the new packaging. Pretty much the same from this view, a slight variation on the same theme. Different lettering, and the end on windows are square instead on round. Much of a muchness, six of one, half a dozen of another etc etc. Mine has a knife hole in the window, (top/left near front )but I'll get over it.

Prowl comes with everything you see here! 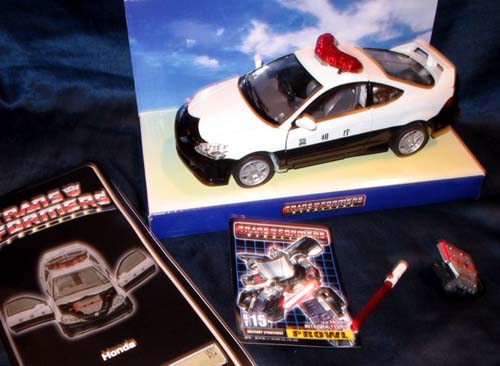 Notice the new stand. Yuck. I'm sorry, but it's dumb, dumb, dumb. Looks like a postcard. Why? It's very 'untransformersey' and no way near as cool as the old one. Oh well, no big deal, it's the toy we're concerned with. So far so good, apart from a couple of marks on the paintwork... 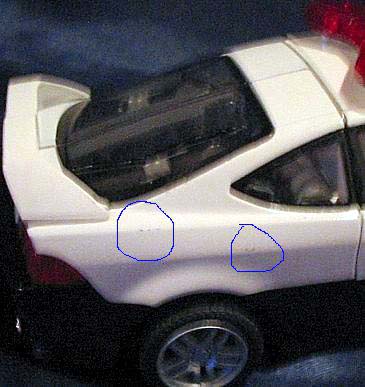 Don't know if you can see them, but yeah, no biggee. Except it's not just that, overall the paint job on this guy doesn't seem as classy as usual, look at the end of the bonnet. That's not very good is it? 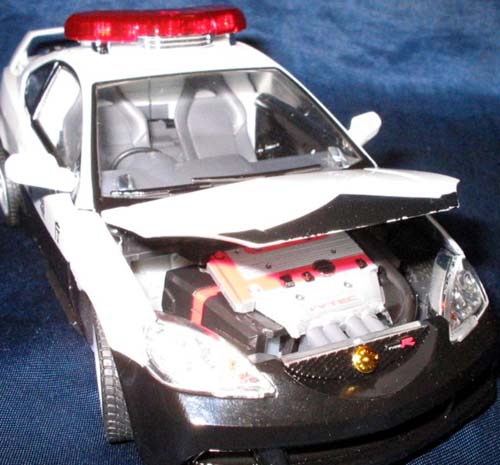 Can you see it? Just the end of the bonnet there is a bit poorly finished. Oh well, never mind. So anyway, all the usual special bits and pieces. Bonnet and boot open, and of course, the doors. You just have to hold the wing mirrors and.... 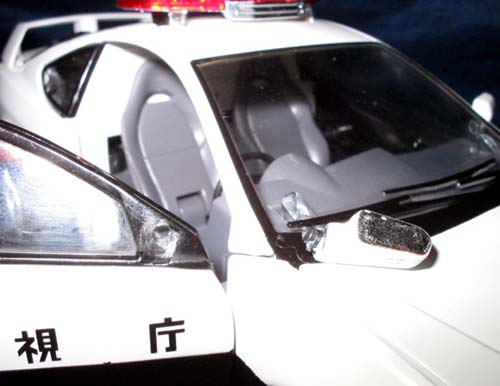 Lucky I've got some good glue. Hang on a sec.

Right, I'm back. Fixed up the mirror. A few grubby glue spots on the windows, but doesn't look too bad. Not quite as it should after being opened only half an hour ago, but OK. So here's the fixed car... 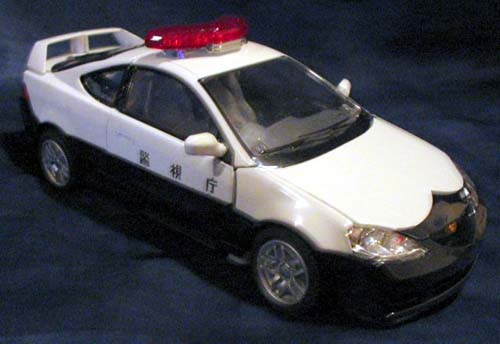 A Honda Accura/Integra whatever Police car. Pretty cool apart from all the rubbish mentioned so far. I like the japanese logos, more authentic. As usual the gun becomes the motor and all that. Pretty hard to get this motor sitting right. You have to have the arms inside the engine bay just right for it to work.

Which brings me to another point, the motor/gun itself. Not much to it I must say. Nicely painted, but this shot shows you how thin it is. 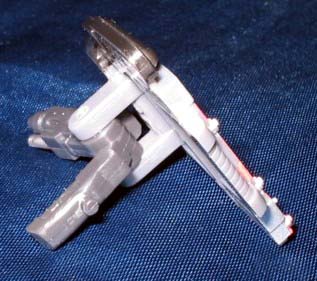 Hmm. From underneath the car looks pretty real, except for the engine end. Very empty under there as you can see. 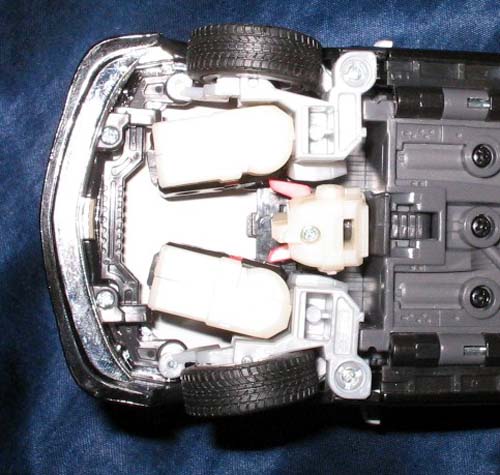 Steering mechanism seems to work OK, but again, you have to have the arms just right. Basically gone back to the old magnet and axle set up.

Transformation. Finally something good. This guy is actually pretty cool to transform. No really ultra fiddly "am I gonna break him?" moments. His arms are just a little tricky, and pop off alot. Anybody have E Rodimus? You know those little orange stands he has on his feet? Same sort of joint. Seriously poppy. Apart from that, fun, satisfying transformation. A pretty good design.

Robot mode looks pretty cool, but there are signs of sliding quality here too. There is quite a bit of unpainted translucent white plastic here, including the head, and to be honest, the head paint apps aren't quite as flash as we've come to expect from BT's. Also looks pretty bland in the chest department compared to the Alt. Maybe needs an Autobot logo or something. 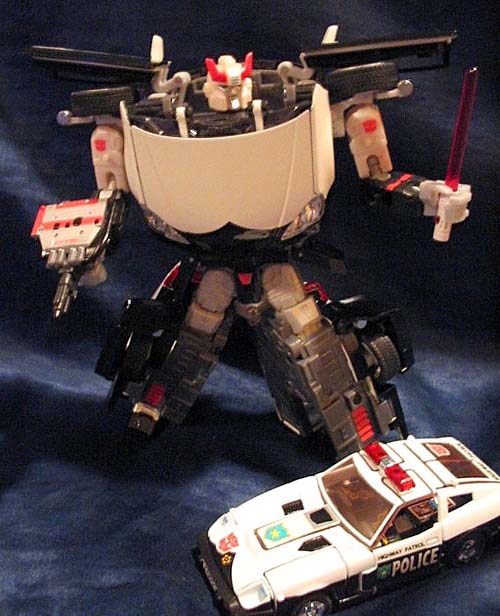 Articulation varies from exceptional in the arms (two elbows, full shoulder movement, ball joints everywhere) to piss poor in the legs. Unfortunately those legs are as bricky as we feared. It's a shame, they're potentially great legs. There are good knee joints there, and they would move fine, but the cars back lights are in the war and severely restrict that movement. Love the night stick though, very nice.

Overall, Prowl is really a big fat dissapointment. It's a nice design, but the quality is not acceptable for a Binaltech. We pay alot for these guys ($85 in NZ) and we've come to expect a certain standard. That's why we continue to justify spending the money. The mirror thing is atrocious, and the paint application not much better. Articulation is poor and the overall feel is that of an inferior product compared to past BT's. This is the standard I'd expect the BT Knockoffs we've seen to be. If I bought a KO, and it was below this standard, I'd be real dissapointed.

If you're more patient than me, you may want to wait for the Alternator version of this guy. Otherwise, be prepared to be slightly dissapointed, and be bloody careful with those mirrors!

(note: my star rating is based on price and expectation. There are worse TF's that I've probably scored higher for that reason).