Surrounded by rumor we now have Decepticharge, or at least I do. I�m not sure how wide the release will be but when I found him there were two others on the shelf. Between the name, colors, weapons, and availability this figure has been something of an enigma. I hope that by reading this I will not only entertain but also inform and maybe even speculate. 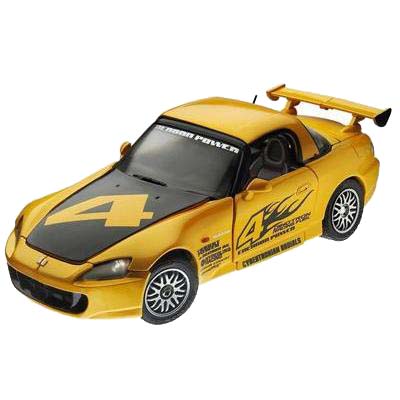 Decepticharge is a Honda S2000 the same as Windcharger. This car does not; however give me that same chick car feel, more of a rice burner. I mean this car�s d�cor had to be inspired by The Fast and The Furious. The color is primarily metallic yellow and black. I say metallic because in the plastic you can see the glimmer of metal flakes or glitter or something. The color is much better in person than in pictures. The hood is black with a huge slanted 4. The sides of the car are very detailed with sponsors such as Destron Oil and Hyperlinq Racing, which lead to a speculation that I�ll touch on further down. I didn�t notice it on Windcharger but on Decepticharge it really stands out, the turn signal just behind the front wheels, it�s a small detail but it surprised me when I saw it was there. The front grill is black with black around the �inside bumper� areas too. The next difference is the roof. He was designed to have the hard top on in car mode as evidenced by the solid black interior so I was afraid that he didn�t come with the �top down� cover piece, but he does. The new roof is smooth like the hard top version and has a larger back window so it is obviously a new piece. The only other change is that of the rear spoiler, staple of ricers everywhere. It�s nice and has black on the outsides. The transformation is virtually the same with the exception of splitting the spoiler and letting the halves rest on each hip.

This is the second Alternator that is covered in sponsorship, the first being Smokescreen. His sponsors were real companies that sponsored the actual racecar that it was designed from. Decepticharge�s are made up using words from various parts of the TF timeline. For example: Thrust power comes from the Gen 1 Decepticon thrust, Dinotron Racing Fuel suggests that there is sponsorship from a representative in one of the Beast Era times (the future), and Dualor Exhaust harkens to the Armada mini-con (unknown to me where this is in the overall TF timeline). Now, is Hasbro/Takara suggesting that this figure is a character from a future/parallel time-period like Battle Ravage? Or are they just making up sponsors? The latter I�m sure is the case but since �The Binaltech Story So Far� hasn�t been updated since Wheeljack I can only speculate. 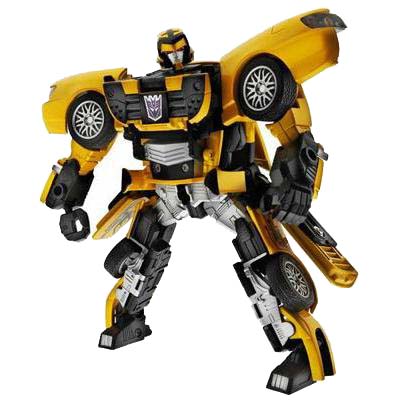 This mode is basically the same as with Windcharger with the exceptions of the paint, of course, a different head, and the kibble created by the spoiler that I mentioned earlier. From the bottom up his feet are now solid black, more silver between his knees and ankles, solid silver in waist and thighs (with the aside from the slot where the drive shaft would be), no painted washboard abs, and a black chest with a decepticon symbol rather than silver and Autobot. The head is the best improvement to robot mode. Its not as flat faced or narrow as Windcharger's. It does lose the ability to look up but it�s worth it in my opinion. The expression is grim, frown with red eyes. He looks like he just got his rice burnin� ass beat by Wheeljack in a drag race. The spoiler isn�t addressed in the directions. So it�s correct transformation is up to you. Mine are out to the sides parallel to one another. Also the ankles are much stiffer on this figure, he less likely to tip over.

I�m not sure if the controversy over the name increased demand or pissed people off but I do know that the name is an original character and that the head doesn�t resemble that of the intended original names, Drag Strip or Wildrider. From overhead it is square but little else is similar. 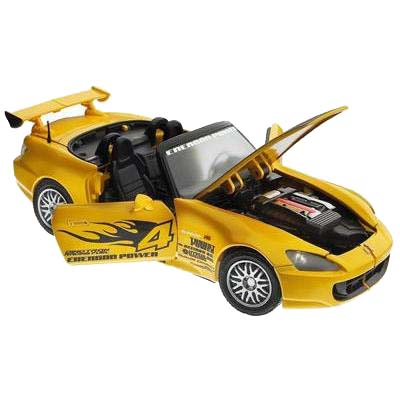 At first glance they are the same but in fact the red and silver have been swapped. I bought the driveshaft online; it really improves the look of the rifle. In Vehicle mode it does little more than hold the engine in place better since the end doesn�t connect to anything. The website I bought it from eludes me right now but I�m sure most of you already know about it.

The leaders of Honda are a bunch of wussies. They�ve stirred up a bunch of controversy over a name and a driveshaft. What else should we expect from a major car company that had never produced a truck till this year. Definite must have figure, especially if you can get the �war mongering� driveshaft. If they do sell Wildrider I�m selling Windcharger.