Evac is a new name to the Transformer line (so far as I can tell). It suits this character well, being that he evacuated Cybertron to protect one of the Cyber Planet Keys and now has guardianship of it on Earth. 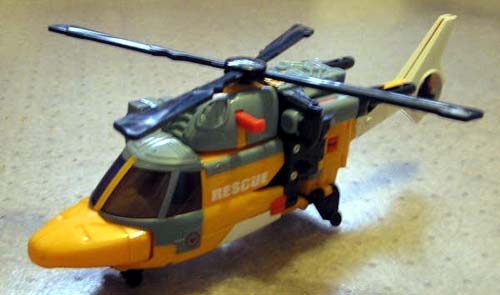 His alt form resembles a rescue helecopter. Overall, a very nice execution. The colors, primarily safety yellow with some navy blue and white accents, go well with this figure. The red lever next to his rotor assembly is used to power the 4 rotor blades above. Continual pushing of the lever will give you whirling action. It does so pretty freely with no hitches. The dual 3-rotor blades on the tail move freely, but have no lever for self-propulsion. There is a cockpit, but it's not too detailed. Just detailed enough to let you know it's a cockpit.

On the right side of the helicopter, there is a working winch. Pull the winch out carefully and you will expose a 3" nylon tether line. The line ratchets into various lengths up to 3". A red button below the Autobot insignia retracts the line back in, and does so rather quickly. 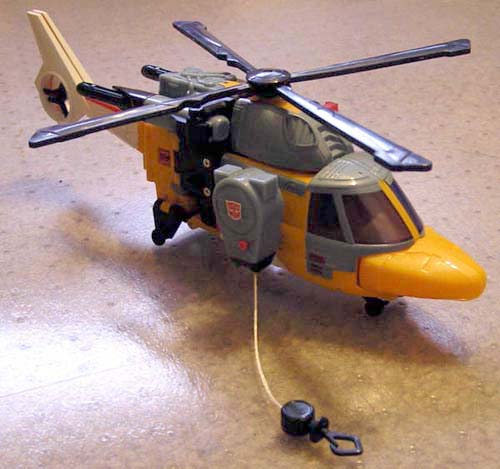 Insert the Cyber Key behind his rotor assembly and 2 rocket launchers flip out for use. The launchers flip out in a 180 degree sideways moon so as to not hang up on the rotor blades, thankfully. The rockets inside are launchable. In another show of subpar QC, the trigger on the left side of mine isn't working quite right. I have to manually reset it. Hopefully, this is an isolated case. Overall, a great mold except for one issue. There is a pretty good sized gap where his waist joins in the back. His transformation is pretty straightforward, but be advised that the right haunch for his right foot is pretty hard to get out without using a tongue depressor or something thin to help it out. 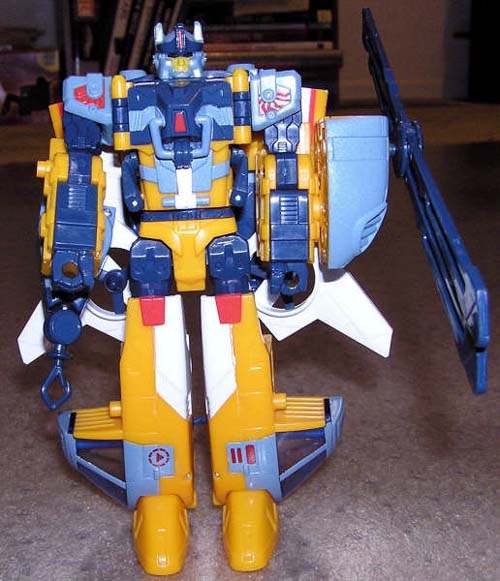 His robot mode is pretty sharp looking. I remember someone saying that helicopters seemed to be pretty basic in transformation. Energon Bulkhead/Quickstrike dissolved that myth, and with Evac there is more proof that isn't true. The winch now rests on his right arm and his rotor assembly on his left arm. Both are still very much useable, although it will take careful positioning of the left arm to get the blades to work right. Speaking of the blades, they can be detached from the assembly. However, the individual blades aren't terribly sturdy and can lose form easily. There are 2 methods for showing his tailfin in robot mode. The one pictured is anime correct, and the one the instructions call an "attack" mode.

The other method is what the instruction manual calls a standard robot mode. Basically, the tailfin rotate down 90 degrees to form a cowl. The only problem with this mode is that you can't lay the right arm down flat by his side due to the winch unless you rotate his forearm 90 degrees. 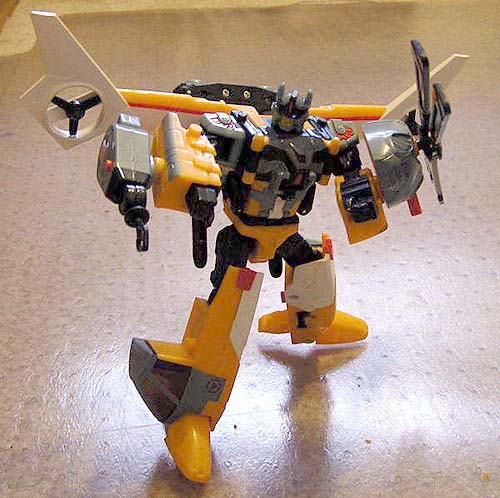 Speaking of posing, this figure has very good posing ability. Most of his joints are ratcheted and he is surprisingly balanced. There is also the ability for light piping through his eyes, which are blue. To activate the Cyber Key mode, insert the Key then position the launcher behind his head. If you position the launcher first and you have his tailfins in attack mode, the launchers will get hung up when activating. So far, it's been a great track record for the Voyager Class figures on this line. There hasn't really been a disappointing figure yet. Evac proudly continues this streak. Both modes are great and, bar a few niggles, this is an A+ figure!