Alot of people were initially disappointed when Smokescreen, and then Silverstreak, appeared for the Alternators line without Prowl. I had heard alot about people kitbashing the Subaru WRX to make their own Prowl. I had tried, but admit that I'm not good with paint. Takara finally saw fit to remedy this problem and released Prowl, albeit not in the Subaru WRX form. 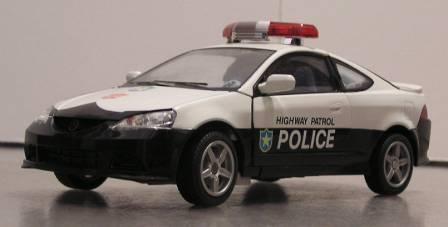 Prowl, instead of being like his brothers and assuming the Subaru form, takes on a whole new form as an Acura (or Honda depending on which shore you lie on) RSX. The exterior is very nicely done. And in homeage to his G1 roots, he even has the Highway Partol badging. 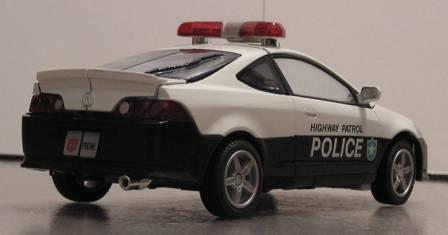 There is some nice detailing in this mode, from the calipers on the 4-wheel disc brakes the the lower air dam and the mesh grille. However, the quality of the figure isn't as good as what has been in the past. They seemed to have changed the resin formula for the plastic. If feels inferior. Also, the paint job isn't up to par. Out of the box, you could see where the paint was already starting to thin out. 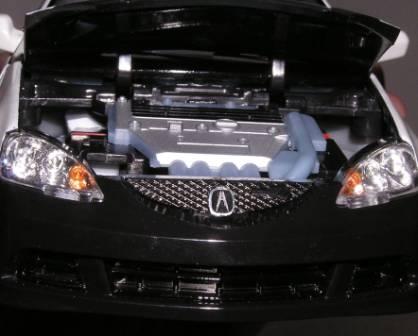 The engine compartment looks fairly good, with decent motor detailing. Also, the hood snaps closed rather tightly, which is a nice touch. 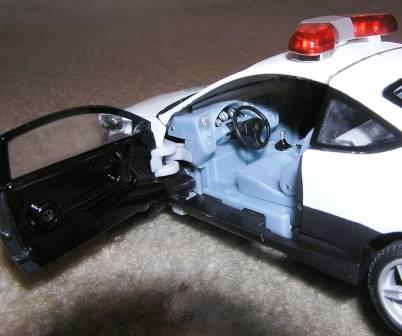 The interior is NOT what you would expect in a police cruiser. It is all in baby blue, which is just a horrible color for an interior. The pull brake, shifter, steering wheel and binnacle all stand out with black and silver accents, which brings out the detail some. The doors are minimally detailed and are all in black. There have been heard complaints about the mirrors breaking loose. I can see how this can happen, as you almost have to use the mirrors to get the doors open. They, like the hood, snap in place pretty tightly. Use caution opening the doors, especially if you use the mirrors as a handle.

His transformation sequence isn't as bad as the Mustang GT molds, but can be a bit frustrating. This is very true for the doors, as there is a bit of a trick folding over the front end while not catching on the doors. The engine, of course, pops out of the hood prior to transformation. Also, you will find his baton buried under the rear bumper. 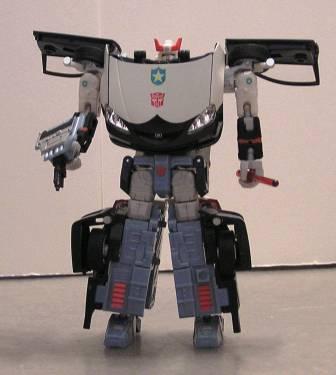 His robot form is a mixed bag for me. On the positive, his face is very similar to his G1 looks. He also has a barrel-chested look about him, which adds to his police motive for me. Unfortunately, much more of the baby blue shows up here, mostly in the lower half of him. There are also hints of red here and there. His arms seem unproportionately skinny compared to the rest of him. His gun, when folded out, looks somewhat skimpy. It is also near impossible to get it in his hands firmly, as the peg buries right into the hinge for his fingers. The same goes for the baton, although I found it's easier for Prowl to get a grip on the baton. One major fault is in his posing. 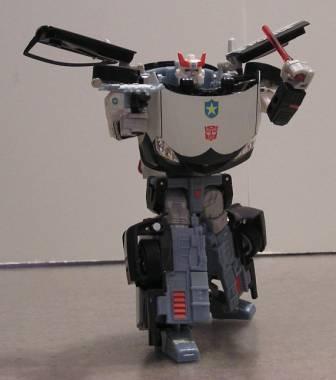 In a first for Alternators, he has very limited knee movement. This is mostly due to the hatchback limiting movement. Also, although he has a nice head, it seems rather small compared to his chest and can at times seem hidden. I am pulling for liking this model, even with it's faults. What concerns me is that the QC seems to be slipping. It will be interesting to see if they fix the QC when Skids is released, of if Hasbro is trying to cut costs and ride the wave. If the latter is the case, the wave will certainly start crashing