The name Galvatron goes back to G1 when Unicron summoned the almost dysfunctional Megatron and reformatted him into a completely new warrior. Unfortunately, while the Megatron/Galvatron story continues to some extent, the basic body remains albeit discolored. R.I.D. did give a bit of an extra punch by giving RID Galvatron 4 extra transformations, making him the only 10-changer in TF history I know of. With Armada and subsequent lines, however, we have had to make due with a simple repaint. Thus is the same in the Cybertron line. This time around, Megatron's anger awakens part of Unicron and, combined with the essense of the Giant Planet's key, reformats him into Galvatron.

Galvatron still retains the race car motif for his alt form. However, the main difference is the colors. No longer is he the Master Megatron Rainbow Monkey looking car, but now is has a color scheme any Decepticon leader can be proud of. He is now predominantly chromed silver with black accents. There is also some burnt orange thrown in around the thrusters, missiles, and cockpit (amongst other places). This really does wonders for this figure and I honestly have to say it's the second repaint-only figure that I've liked better than the original (I save the first honor for Energon Starscream). 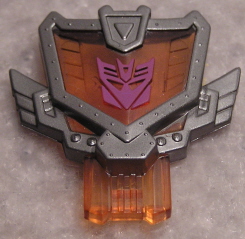 His reformatting has changed his key as well. It is now the same burnt orange as his cockpit, although it retains the same basic shape. It also has a new code to unlock. The Key works in the same way it did with Megatron in this mode. Slide it behind his cockpit and the thrusters pop out (accompanied with sound if you plugged in the batteries).

His jet mode also remains the same. Again, the color changes does wonders for how it looks. It's a pity they didn't release this as Megatron the first time around and maybe did Galvatron like Megatron was... IMO

If the color changes seemed to enhance Galvatron's alt modes, is surely quantifies the effect in Robot mode. There is some more burnt orange that appears on the arms, but the same color scheme is intact. His eyes are now also burnt orange and retain their light piping capability. His face is now the same purple that his eyes were when he was Megatron. Almost reminds me of Armada Megatron in a way. 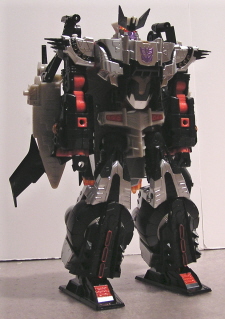 Galvatron's posing ability is the same as Megatron's, meaning you can get in some good posing provided you can stabilize his feet. Because his feet ratchet and because of his equilibrium, it can be tricky to set up a good pose. If you spread out his legs too far, he tends to do the splits. The arms have an excellent range of poseability. One other suffering is the head, which has a limited amount of turnspace due to the hinges for the cockpit. 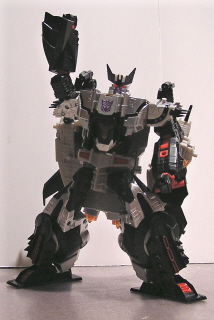 His Cyber Key works the same as in Megatron. Using the Key in the right fender releases the pistol. It looks a little better and still seems weak. However, remember the damage it inflicted on Scattershot, Hotshot and Red Alert. More than meets the eye there, I suppose.. Using the key in the left fender unlocks his spike shield. If you haven't gotten around to purchasing Megatron yet, save your $40 and get Galvatron instead. If you have Megatron already, I think it's still worth $40 to get this repaint. Galvatron makes Megatron's desireability pale in comparison. 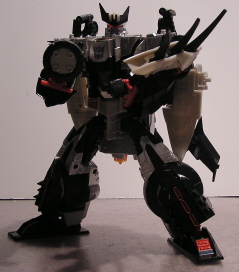