I like yellow cars.. I’m not sure if there is a labeled disease for it but I have it. After the uproar that occurred with Dead End’s release I guess it was only a matter of time until this figure was produced. At least one person went as far as to make his user name reflect his opinion of Dead End not being Sunstreaker. So hush up all you crybabies I guess you got your way. 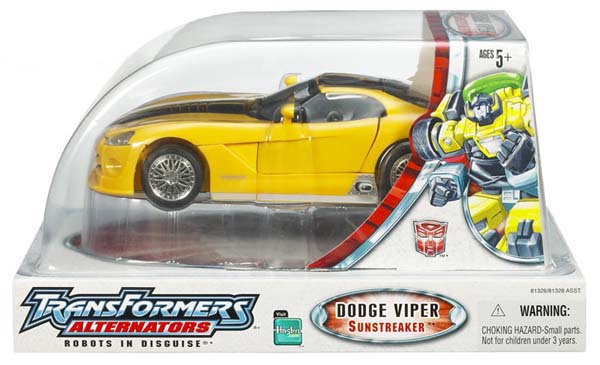 I don’t normally comment on this topic but this time I will since the change has been so dramatic. We’ve gone from a sturdy cardboard box with a view of top and side to a bubble with a small box on the bottom. It’s nice, you can see the figure on all sides and there is even a hole in the back so you can see the license plate, I just don’t know how much abuse from the stock boys it can take or how well they stack on a shelf. The figure itself should be fine because there is ample room for the packaging to be crushed without coming into contact with the figure itself. It took me forever to find his number 18. The bottom box is merely to hold the instruction sheet, which is unchanged from that of Dead End, aside from the name difference and Autobot décor. The artwork is really good and shows Sunstreaker with his doors spread out like wings behind his shoulders rather than how the directions depict them beside his forearms. Also worth noting is the first bit of characterization I’ve seen so far in this line. There is a picture of Sunstreaker’s head with a caption, “You think I look good now? Wait ‘till you see my driving,” very nice. 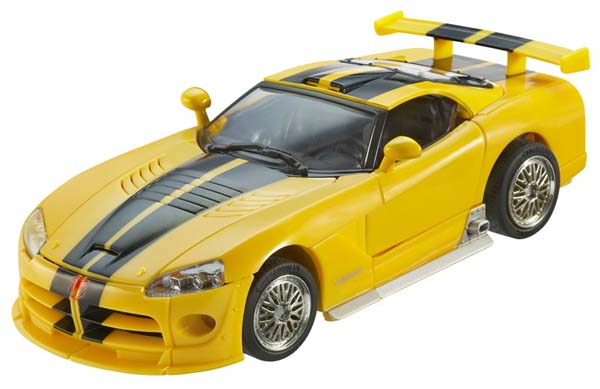 The only change made to this mode is that of the colors, even the wheels are the same. Instead of silver on black stripes with red glass we have black on yellow stripes with clear glass. The silver accents remain the same, as do the molding and logos. It looks great except for the rear area. Through the rear window you can see into the interior to a yellow “hat rack,” as some call it, that should be black to match the rest of the interior. With Dead End this area was made of black plastic so it wasn’t a problem but for Sunstreaker it stands out to me as a shortcoming. The plate is looonnnngggg the entire name is spelled out rather than abbreviated, so it looks a little odd. One more minor detail is the taillight, both are clear instead of red, don’t drive this baby or you will be pulled over. Speaking of interior, the rest remains the same, black with silver accents on the dash and gearshift. 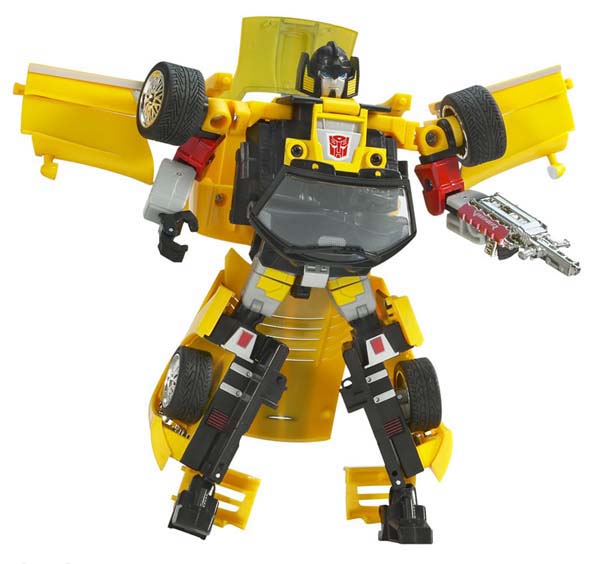 Once again almost no change is found. Now there is yellow but the legs and abdomen are still black. The bicep is still red like the original as are the painted hexagons on the thighs and stripes on the shins. The gold hips are now yellow and the face is now silver. The eyes are traditional Autobot blue and the head fins are yellow on the inside. The feet are plain black. This figure should satisfy all of you out there who raised holy hell over Dead End, and you know who you are. There is nothing remolded, he has the same frown as Dead End. Articulation remains the same but also so does the quality.