Originally to be called Smokescreen before someone decided Crosswise was a better choice (find him and hunt him down), this character was a devoted bounty hunter until doublecrossed and imprisoned in a earth glacier until being set free. 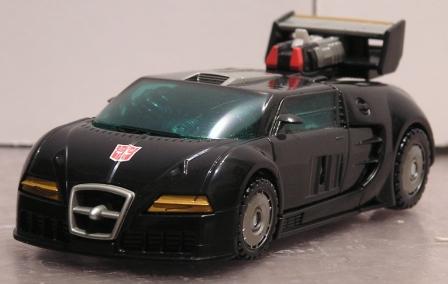 His alt mode is a very slick looking sports car. The style reminds me of the Bugatti EB110 concept from several years ago.He's done mostly in black with some gold trim here and there. The windows are also a decent shade of green. The windows do a decent job of hiding the kibble behind them, as this is the only real disappointment with the Alt mode. You can clearly see his head and hands in the cockpit. Otherwise, there is lots of nice details to be found around the whole vehicle. The grill is nicely done, the doors are for the most part great (except for a screw that holds his arm in place) and the rear end is also in good form. The engine/spoiler assembly adds the final touch to this mode, with a round port on top of the spoiler. This is to add the launching projectile for his gun, but it takes away from the alt form so for photo purposes I left the missile out. 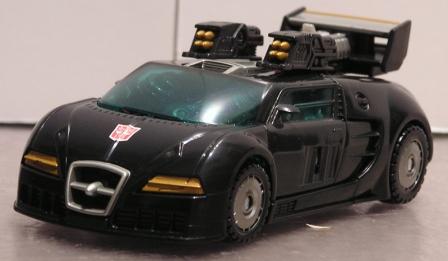 Insert the Cyber Key in the rear slot and twin missile launchers flip out from the back. Though the missiles aren't launchable, the racks are fabulously detailed. It adds to the look of the vehicle very well. Transforming this figure can be somewhat of a pain. The door sills clip on to the doors and you have to pivot both the sills and the doors a certain way or everything gets hung up. Fortunately, the sills are removeable. Also, the rear quarterpanels swivel, but usually pop off from their ball joints when doing so. 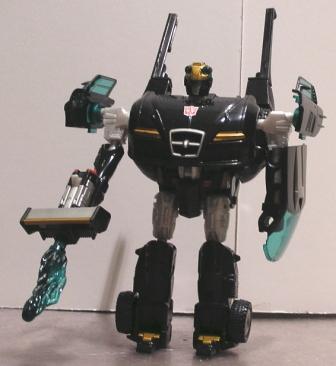 The end result is very pleasing, however. His robot form retains his mostly black color motif from the alt mode along with some gold, but tinges of red also come out here. The legs, which are completely hidden during alt mode, have some good detailing to them. The arms are also nicely done. The roof of the alt mode becomes a non-removeable shield worn on his left arm, but the shield can be positioned to some degrees. The door sills mentioned earlier diagonally stick out from his backside, reminiscent of Gundam Zero from Gundam Wing. The head sculpt, while lacking light piping abilities, is done pretty well. He has the 'goggle' look of Scattershot, but you can pretty clearly make out all his facial features, including the optic sensors behind his visor. 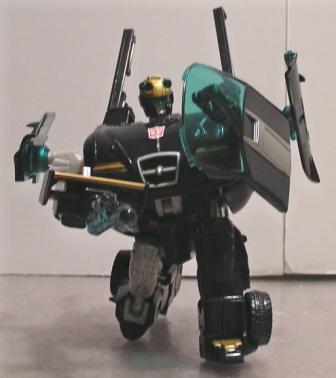 While slightly loose, you can strike countless poses with him. There is a great deal of articulation to go around here. 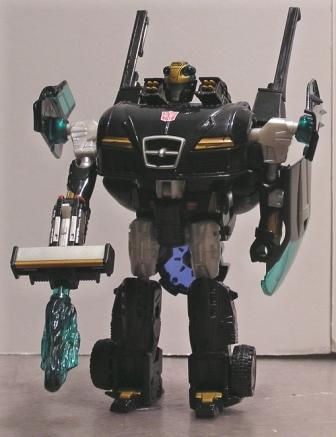 His Cyber Key mode works the same here, except the missile launchers flip all the way over to his shoulders. Speaking of missiles, the launchable missile used for his handgun is intriguing to say the least. It is hollowed out some, like it was a streaking ball of blue fire. Overall, some very minor shortcomings but a definite hit for the collection.