I guess I'll get this off my chest first. I have no clue why this figure is called Thunderblast or how they came up with the name, but it's illfit. There, I feel better now. Ahem... Thunderblast marks a return of a female Transformer warrior and the first Deception female transformer since BeastWars. She is a minion of Starscream who also sees interest in working for Unicron's minion, Sideways. 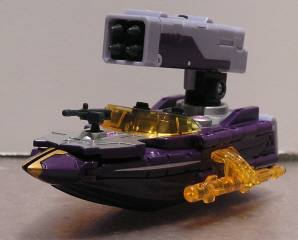 Her Alt mode is a gunboat, and a very fine gunboat is she. Her colors are very Decepticon-like, mainly purple and silver with some orange accents and a slight hint of fuschia (don't make me say pink). There is lots of detail to be had, from the open cockpit to the jets on the stern. On the bow, you will find a machine gun that rotates 360 degrees on it's base (but no vertical tilt). On each side, you will find removeable torpedoes, which also serve another purpose stated later in this review. Then there is the missile battery located behind the cockpit. This also rotates 360 degrees horizontally, but also has roughly 35 degrees of vertical tilt. There are no rollers on the belly of the craft for rolling, but I doubt she has floating capability. I wouldn't try it at least. 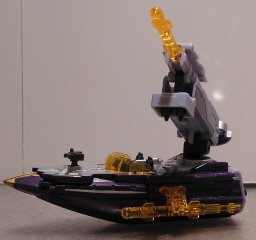 Insert the Cyber Key in the back of the missile battery and it flips up to reveal a launcher. This is where the torpedoes play a 2nd role. Either torpedo can be loaded in the launcher and spring-eject. This is a pretty well thought out alt mode. Her transformation isn't quite as simple as it might seem, but it's still a cakewalk. Just open the belly of the ship, twist her legs and you pretty much have it. 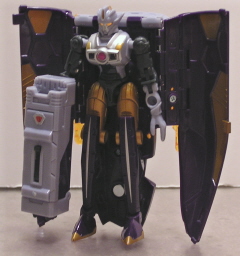 If G1 Scourge had a wife, I bet Thunderblast would be his daughter. The resemblemce in the basic look in Robot mode is very similar. The basic color arrangement remains, with more orange showing up and a small sphere of fuschia on her chest. She has the dainty 'female' look and is more proportionate than Energon Arcee was, although they have similar hands. The missile launcher in her Alt mode now becomes her hand weapon, which the launcher mounts to a peg on her forearm. 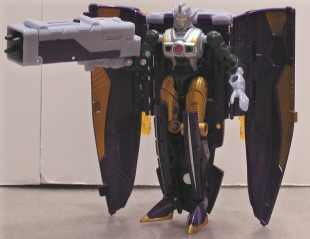 Now for some math: High Heels + Back-heaviness = difficult posing. Although she has good articulation, her 'wings' and the small footprint that she has makes for some balancing issues, so patience is needed when trying to work a pose. 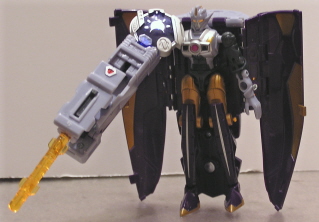 The Cyber Key works the same way in Robot mode, and unfortunately only adds to the balancing issues. Overall, I feel this figure is worth adding to the collection on the sole basis it's a female Transformer, which are far and few between. Also, her Alt mode is outstanding. Her Robot mode has some faults, but overall is great looking. Get past the balancing issues, and she'll be a great addition.