As I've mentioned previously, I'm not much of a beastbot fan. I have to say that the Cybertron line has had some interesting characters. There have been the good (Leobreaker), the bad (Backstop) and the ugly (Undermine). Now, with the current wave of Deluxes out, we have another beastbot, Brimstone. Brimstone is a minion of Scourge on the Jungle Planet.

Brimstone is a pteronodon in Alt mode. The colors given to him are somewhat garish. You have mostly tan with purple accents, but there is also a neon yellow on the limbs and belly. Ther is also some back and orange thrown in there to make it really putrid looking. The details are pretty decent, including the 'fingers' on the wings and head, including the eyes and opening beak. The wings can be pivoted vertically to give a notion of flapping. His talons are in good form, and the front claws operate seperately from the rear claw. However, the stomach and rear of the figure (which is his left leg in robot form) have kibble screaming all over it. It makes the figure look somewhat clunky. Another factor of kibble is the robot head, which is recessed but clearly exposed on the backside.

Inserting the Cyber Key in his back flips out 2 vanadium blades, one on each wing. This is a pretty useful function and the blades flip out quick nicely. They also reset back in the wing easily. He's a real simple bot to transform into robot mode. Instructions are almost not needed. 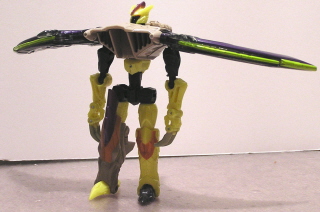 Brimstone's alt form is a mixed bag. The wings have the Jetfire Syndrome, meaning they stay extended out. The talons form his hands, which is standard fare it seems for birdbots. However, the body has an out of proportion feel to it. The chest is huge, but has a gaping recess in the middle. What's worse, there's nothing there to take away from it. Also, the abdomen is virtually non-existent, being extremely narrow. It almost gives him an anorexic look. At least the head is decent looking, with a neon yellow crown, black face with red optics (non-piping) and a purple mohawk. 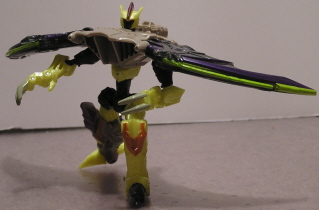 He also has a good range of motion, with good articulation. The knees are quite sturdy, with pseudo-ratcheting ability. 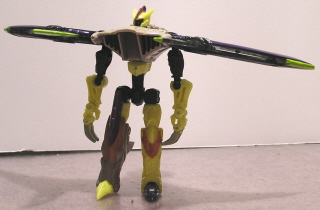 The Cyber Key mode works the same here, but seems out of place unless he's charging head on. Although this figure isn't as bad as Backstop, it's still one to hold off on adding to the collection unless either a completist or a beastbot fan.