This is a Toys R Us Japan exclusive Giftset which consist of one Galaxy Convoy, one Sonic Bomber and the Ramble used by Coby, or ‘Coby Ramble’, that was featured in the Galaxy Force Animation.

The box itself is huge! It measures 6in (15cm) by 15in (38cm) by 17in (43cm)! Sadly, there is no window. What we have on the front is the tech spec pictures of Galaxy Convoy and Sonic Bomber with their alt modes of the toys in front of that. The whole panel has a re-colored picture of Sonic Convoy with red breastplate and gold swords, updated obviously with the exclusive in mind. What I would have liked to see would be the front being a panel, lifting up to see the contents much like THS-01, this being a exclusive.

It seems this release was rather rushed, judging by the fact that the inner tray of my EX-02 was placed upside down relative to the picture on the front. The truncation of the edge with the planet’s name on the Galaxy Force release did not help because the inner Tray of EX-02 was truncated on both sides! That’s why it would fit both ways. The contents was not affected in any way what so ever because of the numerous (and tedious to remove) twist ties involved.

The inner tray was arranged so that the basic mode of Galaxy Convoy and Sonic Bomber was in the middle, with the Galaxy Convoy trailer at the bottom left, the leg additions of Galaxy Convoy on top of that, a tray of Force Chips, missiles and guns on the top left and Coby Ramble on the bottom right. A lot of space in between which could be reduced though, and that would have saved one some of the shipping cost.

In brief, Galaxy convoy got partly re-colored and some parts made in a translucent material while Sonic Bomber gets a re-color. Coby Ramble is both a remold and repaint.

The mold remains largely the same - except for the mouth plate. Referring to the picture below, one can see that the mouth plate of GC-01 doesn’t cover completely the silver band of his nose, whereas the one of EX-02 Galaxy Convoy does. Is this an improvement in the mold? Or just that my GC-01 was flawed? 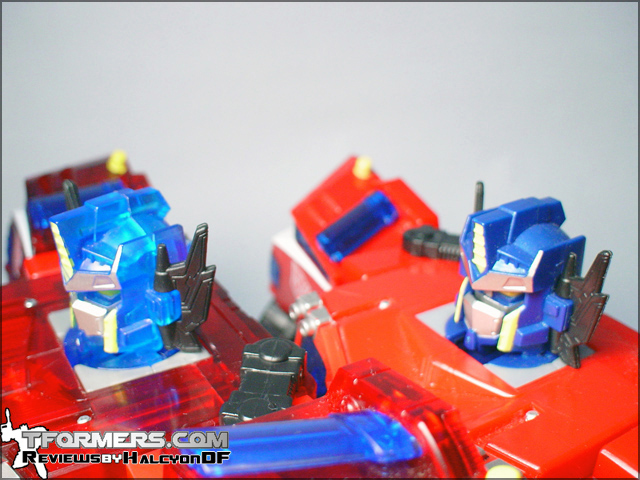 When pictures of GC-01 surfaced, we see that in those promotional pictures his arms thighs and cannons were silver, but the actual product come with a dull light grey that emphasis the plastic material. EX-02 Galaxy Convoy came with a darker shade of grey that carries a slight metallic sheen to it much like the red, which alleviates the plastic material’s look a bit. Still, being a exclusive, I would have liked to see it replaced with a silver not unlike that on THS-01 or Master Galvatron. 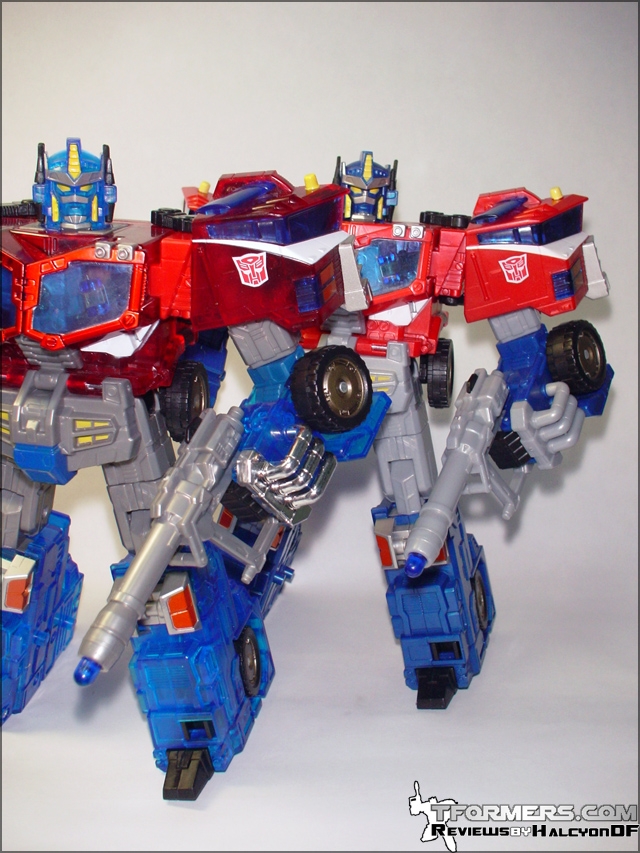 The center chest piece, shoulder guards and lower leg portions are all replaced with a translucent version of the respective colors. The translucent parts carry off a great look and feel which would be look great when EX-02 was illuminated from the back. The white on the chest appears to be haphazardly painted on, but this could be because of the translucent nature of the parts. The bumper guards on his hands, strangely, are chromed! Why could not they have done the same for all the grey? In vehicle mode, it looks great though. It could be that being the only part that is completely visible in vehicle mode, only the guards were chromed. Perhaps it would have been better to color the guards dark grey like the rest, for uniformity’s sake. 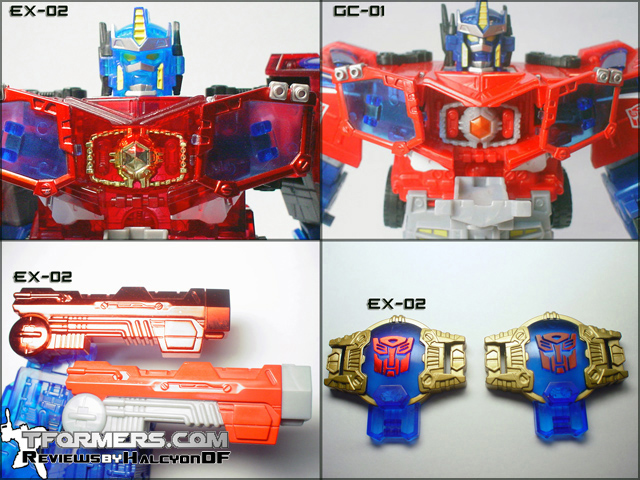 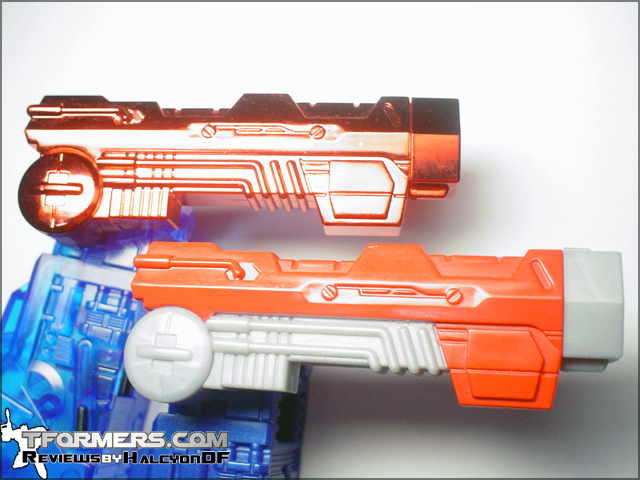 When in Super mode, the huge legs, being translucent as they are, they look somewhat smaller. Also, the cannons on the side of the legs are now covered with dark red chrome instead of the original grey and red. I have to say I prefer the red chrome over the bright red and dull grey! The windows on his chest are the same tinted blue as GC-01but now come with a red chrome paint - similar to the leg cannons. Also, the matrix is now in golden chrome! Also, the force chip for Galaxy Force is slightly differently. The Cybertron faction symbol is now painted with a metallic red, the other two force chips for Sonic Bomber and Coby Ramble, however, remained unchanged. 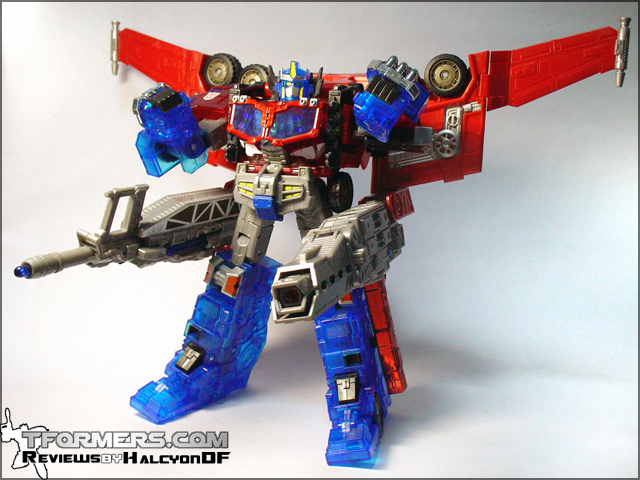 The trailer is disappointing, to say the least, it is largely unchanged except for the darker shade of grey. The darker shade of grey does makes the cannons look nicer but the red parts remain in the original colors. I cannot emphasize how much nicer it would have been if it was translucent like the rest. However, it is good in a certain way for people who have both EX-02 and GC-01 as one might want to keep EX-02 as Sonic Convoy, displaying along Sonic Bomber and GC-01 Galaxy Convoy combined with the EX-02 trailer. Those cannons look a ton better with the dark grey instead of the lighter versions. 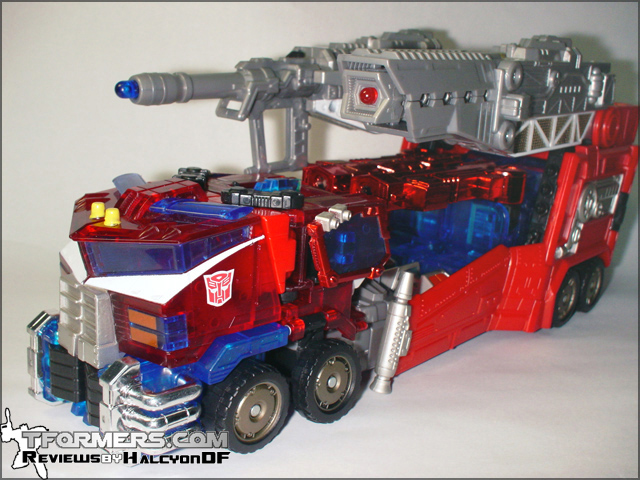 When transformed into his vehicle mode, Galaxy Convoy appears a lot darker now considering most of the parts are side by side, allowing little light to pass through. He does not look very different from GC-01 in any major ways besides those pointed out above except that the apparent “dark red” (due to little light passing through the translucent parts) goes real well with chrome red guns. And still, the trailer does not fit here. In a body largely translucent, the opaque red sticks out like a sore thumb, once again a trailer which is translucent would look so much better.

Galaxy Convoy looks great on his own, it is not better than GC-01 – after all it is the same mold. The opaque trailer has just 1 advantage, and that would only be valid if one had the first Galaxy Convoy. With the EX-02 Galaxy Convoy, it sticks out like a misfit. I believe that this was the make or break point for many that had wanted to get this giftset.

Sonic Bomber is probably the least changed out of the 3 Transformers in the box.
There were 4 changes in total made to Sonic Bomber which are his red paint, his chestplate, his head and his swords. 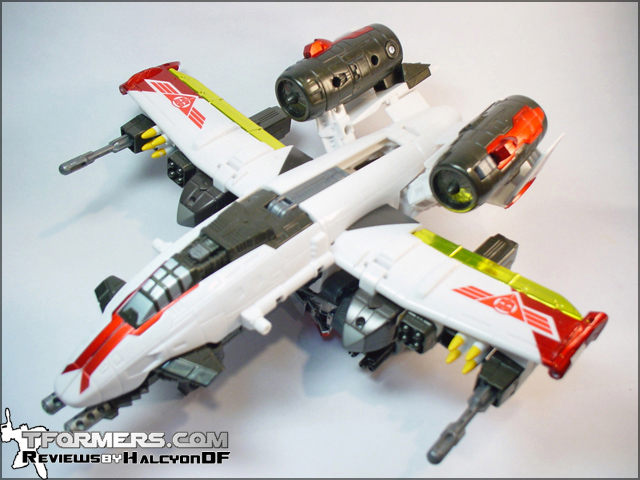 Firstly, all his red are now a dark metallic red. Nice change there, but not a big one. The areas affected are the red around his wing tips, the bottom of his tail fins, the strips on his engines and the red ‘Y’-shaped strip in front of his cockpit window. Next, the ailerons which form his sword blades are now golden chrome which does not score well with me. The silver used previously looks much better with his color scheme. 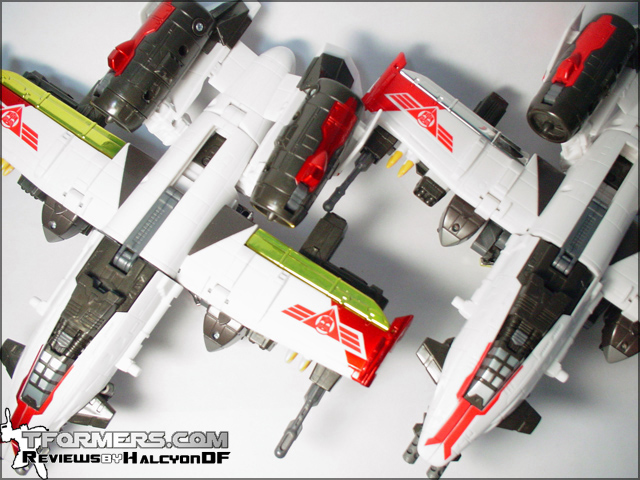 In his robot mode, the other 2 changes are visible. The first is a improvement to the head mold. Previously, the middle white plastic band across his nose appears to be too short and ‘warped’ upwards, covering a slight bit of his eyes. This has been fixed in the EX-02 version as the following shot compares side by side. It is not that easy to make out, but the head of GC-22 has some space below the white band. 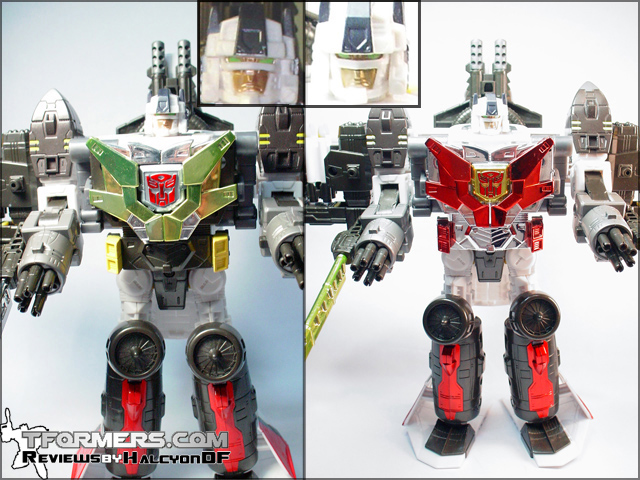 The other change would be to his chest plate. The gold has been replaced with red and the dark grey is now silver. The center embossed Cybertron faction Symbol is still metallic red, but now lies on a gold background. The new chest recolor do not go well with the rest of Sonic Bomber, at least that is what I feel. The new change would probably look good on the EX-02 Galaxy Convoy when combined as Sonic Convoy but more on Sonic Convoy later on. 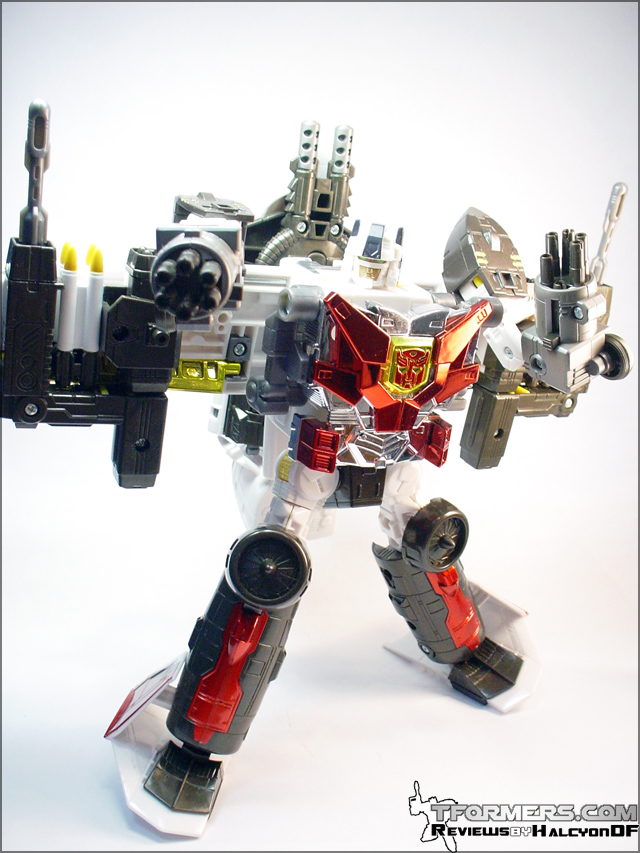 All in all, it feels that Sonic Bomber was changed because he had to be different, rather than a well thought out redesign of his color scheme. Out on the net, there was a fan who colored his Sonic Bomber in shades of red, replacing all the white with red. That would have worked well in this instance as the chest is now red and silver and Galaxy Convoy is largely red to begin with.

Sonic Bomber is a great toy, but this rating is based on the fact that it was not changed much, despite a major overhaul leaning to shades of red would have really worked well for this Sonic Bomber “Fire Version”. I do not see much “Fire” in this one.

Move on to the next page for my views on Sonic Convoy and Coby Ramble!