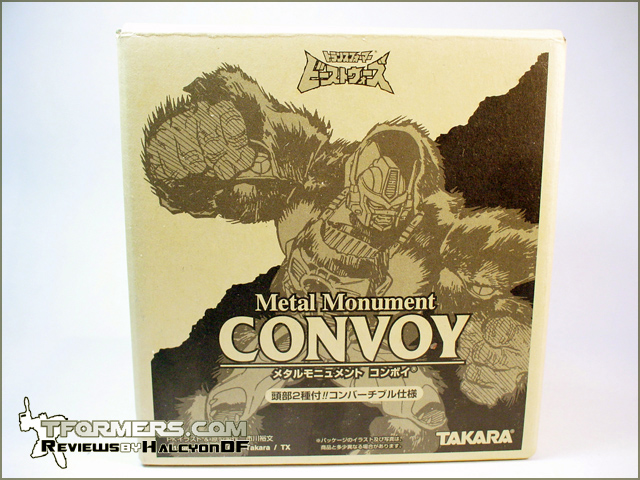 I recently acquired this superb-looking figure to add to my collection. This is a pewter cast of Beast Convoy, or Optimus Primal on the western side of the world, in his first form – the black, white and red version. About pewter it is made mainly of around 85-99% tin and the rest are copper and or bismuth, antimony and silver. It is quite malleable and breaks more then other alloys. Tin is the fourth most precious metal after platinum, gold and silver. 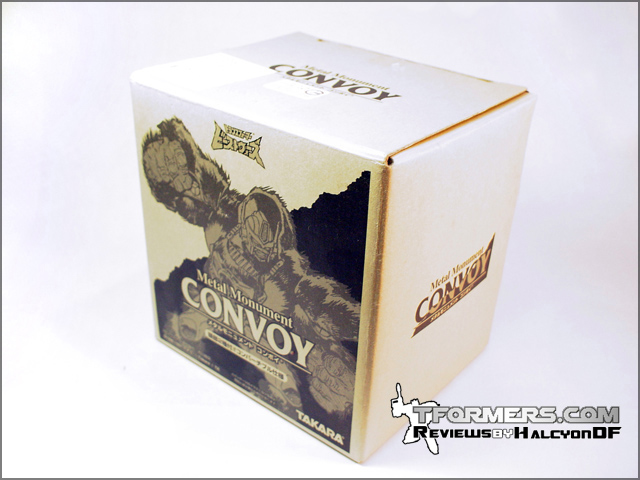 Metal Monument Beast Convoy comes in a 10x12x12.5cm cardboard box that would be best described as plain. It says “Metal Monument Convoy” on all sides besides the back. The front is decorated by a black and white drawing of Beast Convoy. A table of information is printed on the back with the barcode and the line “Made in Japan”. Beast Convoy is wrapped in paper, then bubble wrap and is cushioned on and by Styrofoam strips. He comes with 2 heads, each packaged individual in a small plastic bag each. The base is kept between the Styrofoam cushion and the box separated by a cardboard wall. The portion the base is packed in, also contains a small bag containing 2 nuts meant to secure the figure to the base. 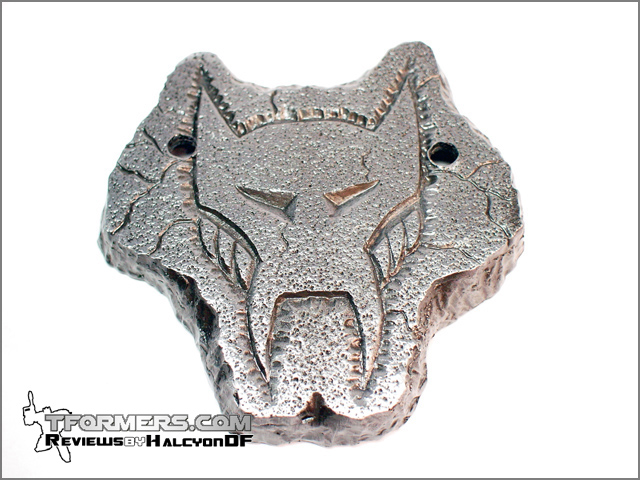 The base is around 1 cm tall and the sides are very rough, much like a cliff face. Right in the center, is a deep engraving of the Maximal faction symbol. The area surrounding the symbol is decorated with a few crack lines. The shape of the base is thus the size of the symbol with additional area for Beast Convoy to stand on. This base is probably worthy to be sold as a décor item on its own. Beside the symbols are 2 holes that are meant to hold the screws that extend out of each of his feet. The bottom of the base is slightly hollow to allow space for the nut to be screwed to the feet. Despite below hollow underneath, the base is significantly heavy and carries out its intended function well. A hard jab at the figures tips the figure very slightly only in spite of the weight of the figure coming in at around 600 grams. 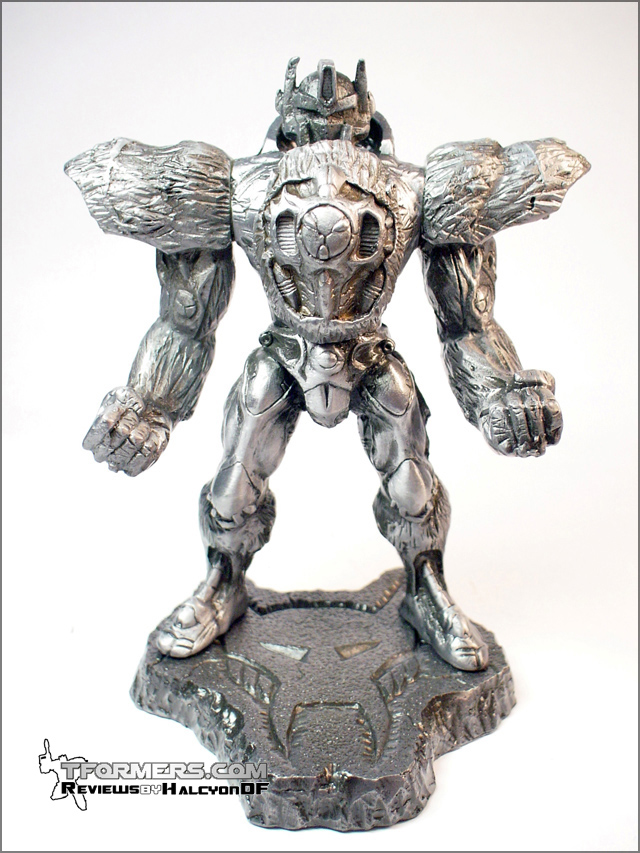 Beast Convoy stands plainly on the base with his fists rose till his elbow level, perhaps with the connotation of absolute resolve. His elbows are slightly lowered than where they should be on a proportionate humanoid figure and are significantly longer. Should he lower his arms, his fist should fall near his knee, whereas one of a proportionate humanoid should have his fist fall mid-thigh. However, one should take note that Beast Convoy transforms from a gorilla, and they have a much larger forearms than normal humans. Taking note of this, the unusual length of the arms might be acceptable in this sense.

On a glance, it appears that Beast Convoy is in a symmetrical position, but a closer inspection reveals many details that point otherwise. There is a line that runs down across the shoulder guards on the outside and this is more defined on his right. The right arm is minutely lower than the left with the fist at a 60 degrees incline while the other is straight horizontal. His right leg seems to be more outwards then the left. Also, the cut which his chest plates resides is lopsided. 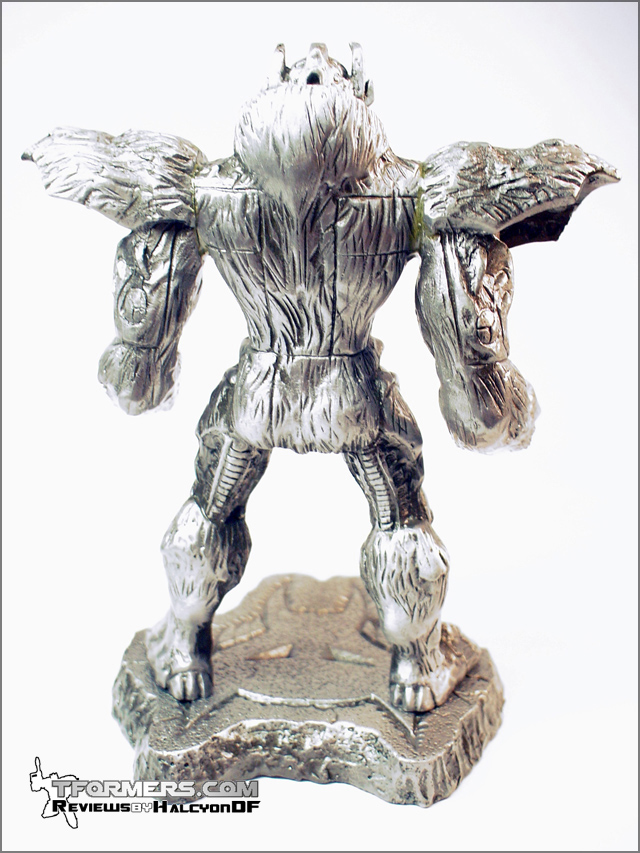 The “beast” parts of Beast Convoy are highly textured with cuts and scratches. This includes the shoulder guards, the area around the chest, his forearms and his back. The entire figure has the “blackwash” effect. I cannot tell if the upper surface was polished or they did washed the figure over with black paint as I am unfamiliar with the process. However, it brings out depth in the texture and it emphasizes the edges for the bot parts on his thighs. The chest plate is pretty well done and defined but the lopsided shape does tend to catch one’s eyes easily. There are a few straight lines drawn across his back. If memory does not fail me, these are compartments for his shoulder launchers and or his jet thrusters. His forearms and leg calves are quite well defined and the muscular does add some power to his overall look. 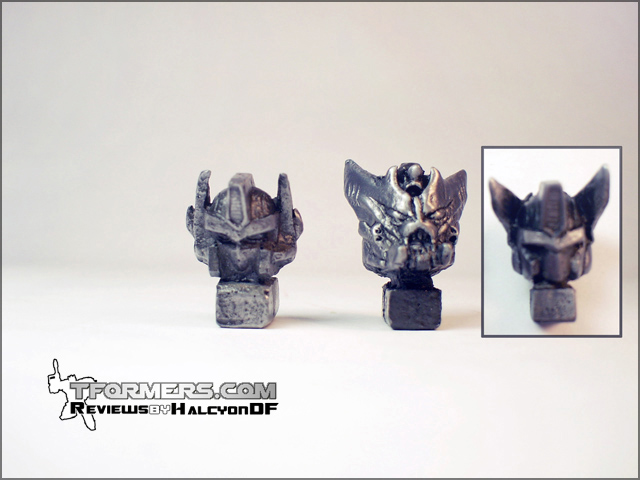 Beast Convoy comes with 2 heads, 1 is the normal head as seen in the show, and the other is his mutant head. His mutant head is part of the first wave of beast wars toys. All of them had a 2nd head mode which was this mutant head. 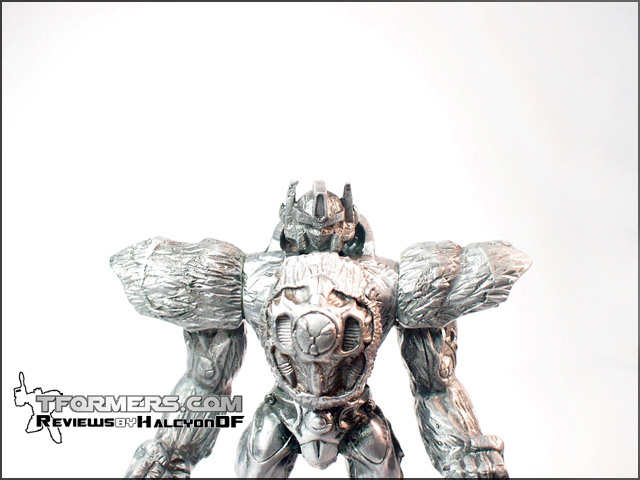 For the normal head, the sculpt looks great but his right antenna is bend slightly to the left. Sadly, the show model is not used. This figure follows the toy which had a mouth-plate instead of a mouth. 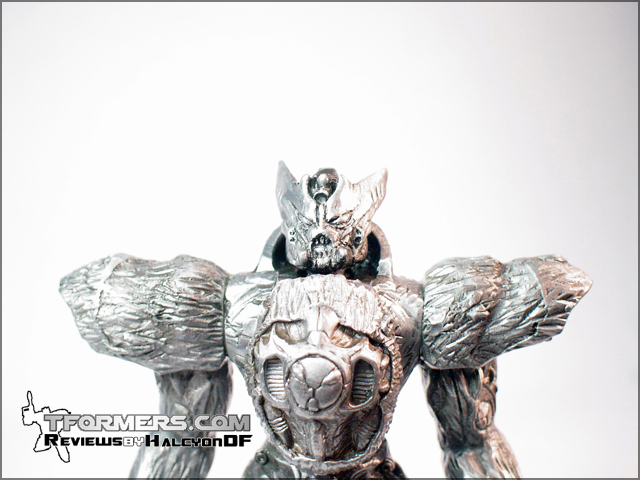 His mutant head has always appeared queer and ill-fitting of Beast Convoy. It looks like a cross between Marvel’s Wolverine and a Predator with the “ears” and his mouth the sides of his jaw protruding. 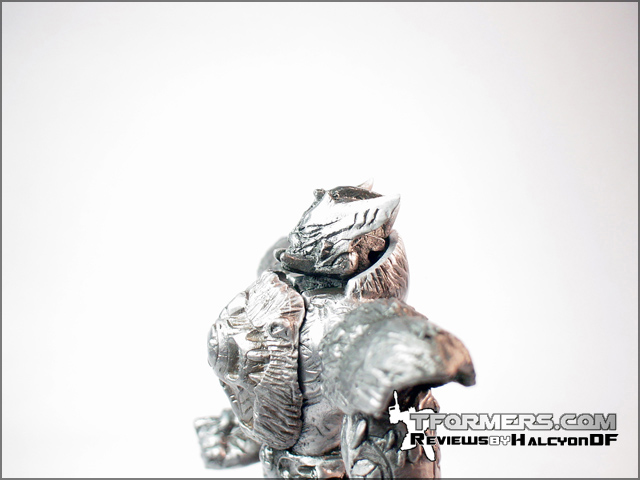 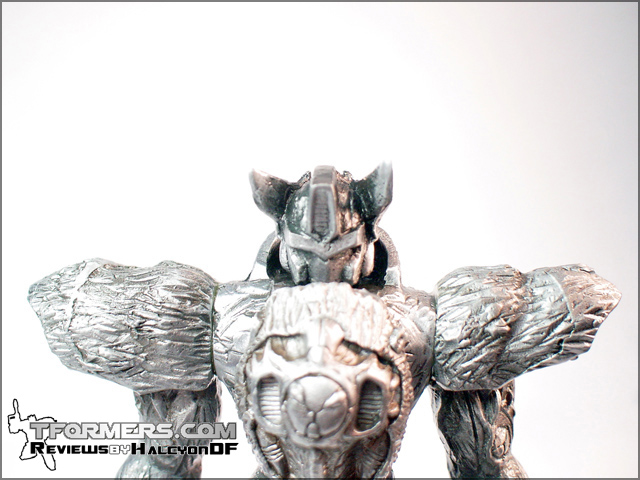 I am a Beast Wars fan, and if you are one, you would enjoy this piece. Problem would be that it is quite rare, and shipping will cost due to its weight. I know some fans have reservations about things that do not transform; however, this figure is great as a figure as it is intended, NOT a transforming toy. Also, I was fortunate to have acquired this way below the recommended retail price of 10000 JPY (100 USD). Some online stores still have stock of this figure at 30 to 40 USD at this point in writing.