When Alternator Dead End first came out, it was somewhat a mixed bag. On the upside, he was the first Decepticon in the line with a silghtly retooled body. However, his striking similarity to Sunstreaker made people wonder if this would end up being a recolor. Why this mold wasn't Sunstreaker in the first place is beyond me. For one, Dead End isn't remotely close to looking like his G1 counterpart. But I digress... Sunstreaker has finally made his anticipated appearance in the Alternators line.

Alt mode wise, Dead End and Sunstreaker as almost identical. There are no molding changes to speak of. The rims are even exactly identical. The only changes are in the windows (which are now clear), the paint job (which is yellow with black comp stripes), the taillights (which are now clear instead of smoked) and the license plate (which fully spells out Sunstreaker).

I have always liked the Viper mold with one minor niggle. This is in the frumpy looking rear end, which looks like it was chopped off and given a cheap set of aftermarket taillights. 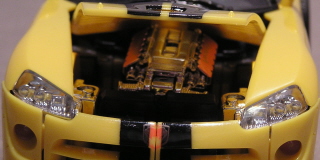 The engine/gun is also identical to the other Vipers. Same with the gap showing thru the engine bay. 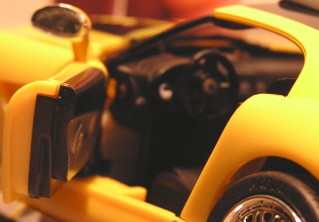 Same goes for the interior. A carbon copy of the other Vipers. It would have been nice to see them put some kind of effort to distinguish Dead End and Sunstreaker more than a simple exterior paint job, but I might be asking too much. Trasnformation is identical with Dead End. The only bad point is where the shoulders hinge on the back. I've had a problem with Sideswipe where the plastic would crack after time and eventually break off. Therefore, use care when transforming this figure. 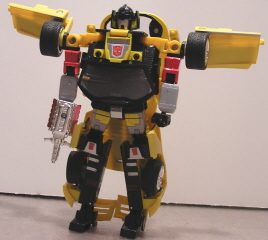 Robot form is identical to Dead End's, but personally looks more at home with the yellow paint job. He is mostly black and yellow with red arms. I've heard some people complaining about the red arms, but keep in mind that G1 Sunstreaker had completely red arms, not just the bicep area. One other issue has seemed to be with the doors. There has been alot of complaint about the correct way to hang them in Robot mode. For sake of arguement, I hung them per the picture on the box. However, it all pretty much depends on personal taste. I use different positions for both Sideswipe (G1 sytle door by the arms) and Dead End (Upward vertical wing-like style). Although there are probably too many Autobots out there already and not enough Decepticons to go around, I would still get this figure. If anything, the Car Brothers (Sideswipe and Sunstreaker) would be back in business.. 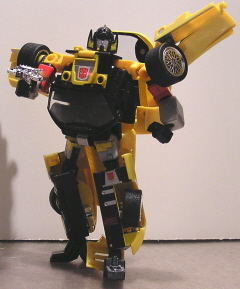