"Speed is immaterial when you've got intelligence... And killer rims"

Skids is perhaps one of the most undervalued G1 figures. For one, he was a Honda City, a car that the US has never (nor will it ever) see on the roadways. He also only appeared briefly twice on the animated show. He was the thinker, not much of a warrior. He now makes a return on Alternators. 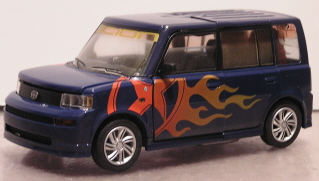 Skids is now a Scion xB, which in itself is known in Japan as the Toyota bB. He retains his navy blue paint scheme, but has been jazzed up a bit with a flame job. Included with this flame job are gold tinted windows, a SCION banner on the windscreen, 7 spoke alloy rims and clear taillights. 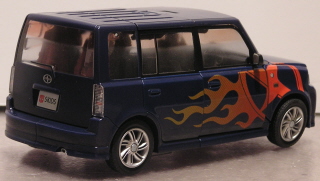 Overall, the detail is nice. All the Scion emblems are legible, the air dams are meshed out and he even has the hatch mounted wiper arm. However, the quality of the paint job is likened to Earl Scheibb. I found several bubbles on the roof and thin spots on the hood. QC is definitely slipping as of late. 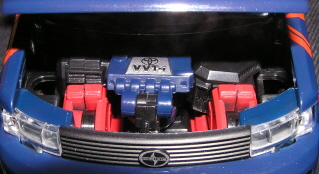 The engine has good detail to it, including Toyota's VVT-i logo. 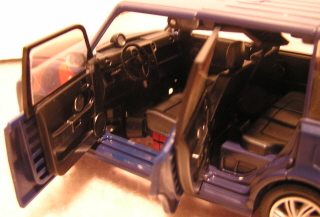 The interior is also pretty well done. Note that all 4 doors can hinge out traditionally. Use caution when opening, as they are extremely stiff. The center mounted speedo is represented, and the center console is outlined in silver. You can make out the HVAC switches, the door handles and even the glovebox. Also, front and rear seats are present. One of the nicer interior jobs as of lately. He's a bit frustrating to transform the first time, as the instructions aren't exactly clear on some aspects of it. Once you get him into robot mode and back once, it gets alot easier. There's just alot of rotating and bending that needs to be done. 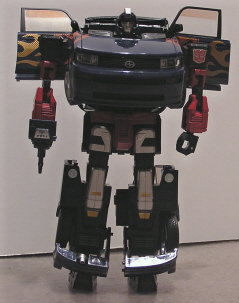 This is the end result. He looks pretty similar to his G1 roots, I think. The engine gun seems puny once you fold it out. However, since Skids isn't a fighter, I suppose that is a mute point. A lot of red shows up in his robot mode, and the contrast does him just fine. The legs are somewhat goofy to look at, as the rear doors stay about thigh level. He also has a great deal of poseability on all appendages, including the head. Overall, this is one of the better Alternators I've seen come across lately. If they just left that hokey looking paint app off, he would have been perfect. Hopefully, he won't be undervalued again after 20yrs. 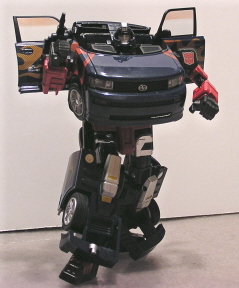