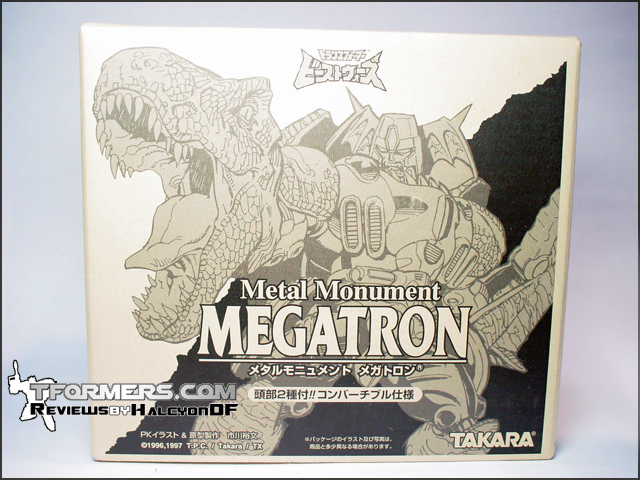 Released along with Beast Convoy in the Metal Monument Series is his nemesis – Beast Megatron. He is packed similarly like Beast Convoy but in a larger (16x14x12cm) plain cardboard box which features a black and white illustration of the evil Predacon leader. However, he is much heavier due to his arms and his back and comes in under at 1.2kg. 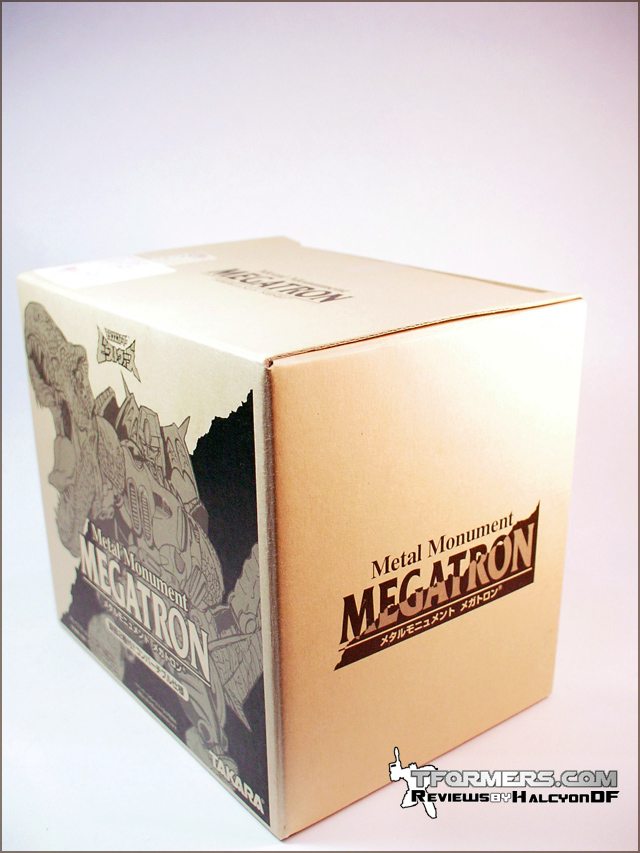 Beast Megatron is a 12 cm tall figure cast in pewter. By comparison, Convoy is slightly shadowed over by a mere 0.5 cm. About pewter, it is a malleable alloy comprising of mainly 85-99% tin (4th in rarity after platinum, gold, silver.) copper and antimony. 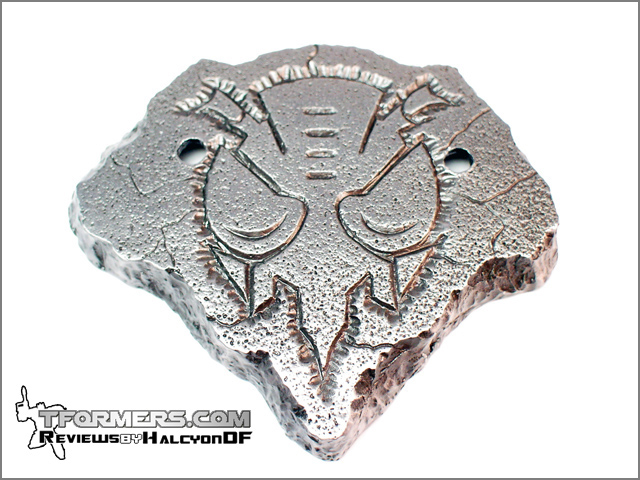 The base is hexagonal and the center is adored with a deep engraving of the Predacon faction symbol. 2 holes at the side of the symbol are there to allow Megatron to be firmly attached to the base through the use of the nuts and the screws sticking out of his feet. The base itself without the symbol serves its purpose well, but the Predacon faction symbol is a really nice touch. Being taller and having a higher center of gravity, Megatron tends to be back-heavy and will topple backwards over a bit easier than Convoy. However, by all standards, he is still a very stable figure. 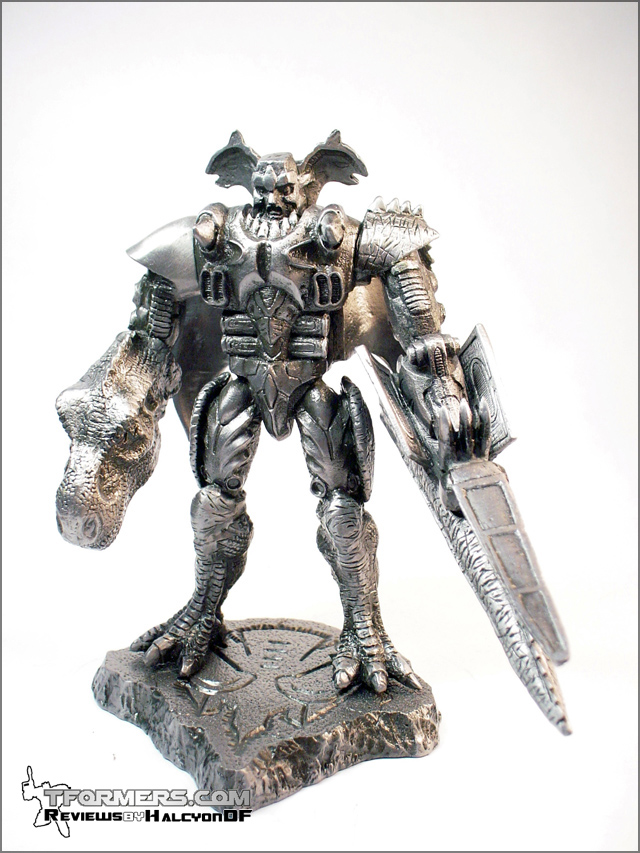 This rendition of Megatron stays pretty close to the show model. Megatron is depicted standing with his two arms slightly raised. His lower legs are those of his alternate mode – the Tyrannosaurus Rex – with his heel looking mechanical. Cuts are all over the front of the legs and they achieve to a great effect a bird/reptilian look for the legs. The calves have this texture that is made up of little round patches, resembling a thick hide. His thighs are much more mechanical looking in nature, with nice defined deep cuts at the inner thighs. His hips are guarded by 2 oval plates that have the ‘thick hide’ look, but sadly, they are obscured from view by the immovable arms. 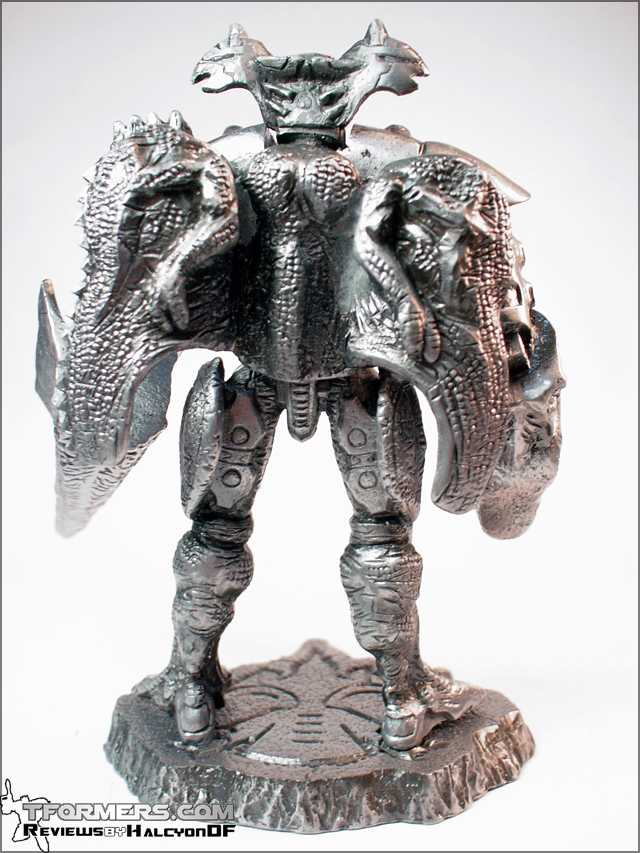 His chest is muscular looking with bulging parts that look like chest muscles instead of being totally flat like his toy version. The horns at the side of his shoulders are now bigger and his “lower jaw line” of teeth in front of the nice is included for a great coordinated look. His back is also elaborately detailed. Megatron carries 3 portion of his T-Rex’s middle portion. You can see the shapes of his 2 arms and the shoulder muscles. The ends of the hides hint that when in alt mode, they connect to the oval hip guards. The left portion has a running ridges of spikes that are absent on the right. These form the middle portion of the spine “spikes”. I have to say, the detail on the back portion is pretty amazing. The rich texture just looks great and to me, they are pretty realistic of a dinosaur. 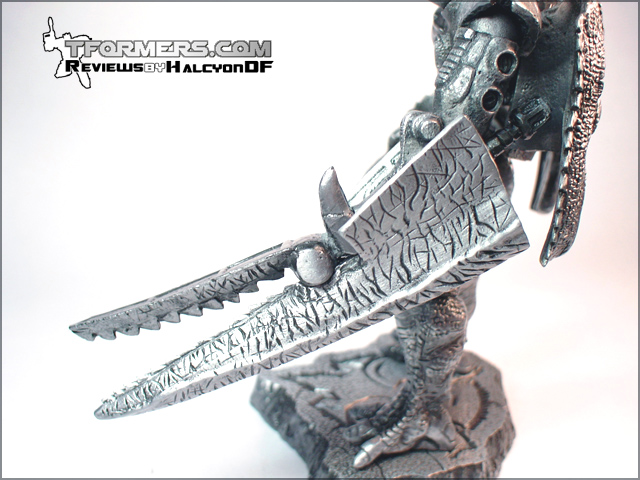 His left shoulder guard is once again of the dinosaur skin texture and features the same ridges. His lower arm however, is the one worth mentioning. The entire arm is formed from the tail. The lower arms looks like it ‘rests’ on the tail, and 3 panels appear to have opened up for it. A third panel is long and sharp and actually forms the upper part of a claw. This claw is half the length of the tail and the teeth are the ridges. The texture is not as well done as the part but the shape and sculpt are excellent, like that of a long slender tail. The better arm however, is the right arm. 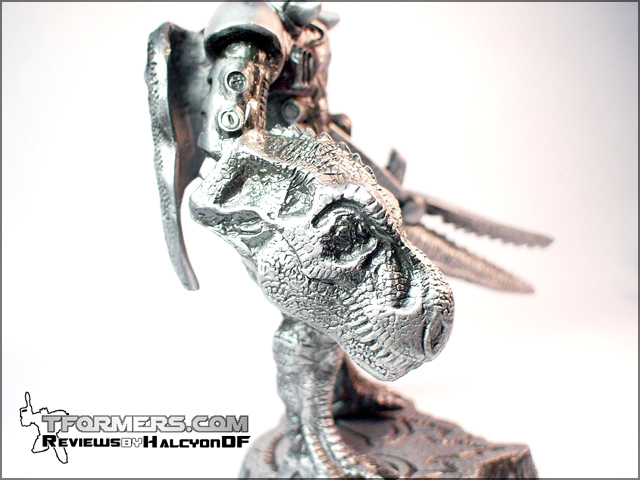 The right shoulder guard is a smooth and shiny which looks nicely polished, contrasting greatly with the other side. However, his lower arm is the show-stealer. It is a life-like replication of the T-Rex head! You can clearly see the lower jaw, the eyes and the nasal areas together with the slight bulge at the back for his brain and the menacing teeth sticking out of the mouth. The same rich texture applies here, interchanging between little patches and intersections of lines. I feel that this part is the highlight of the figure in its entirety and it plays an important role in my decision to buy this figure. 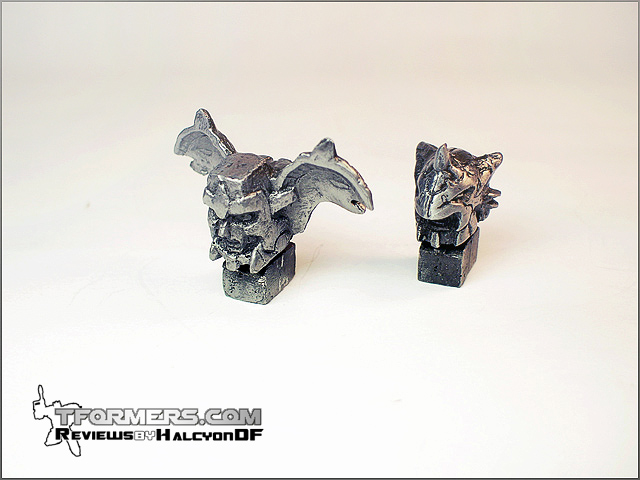 Megatron follows the toy version even closer with his next feature – the 2 heads. Both heads are interchangeable. One is his normal show/toy head and the other is his mutant head. 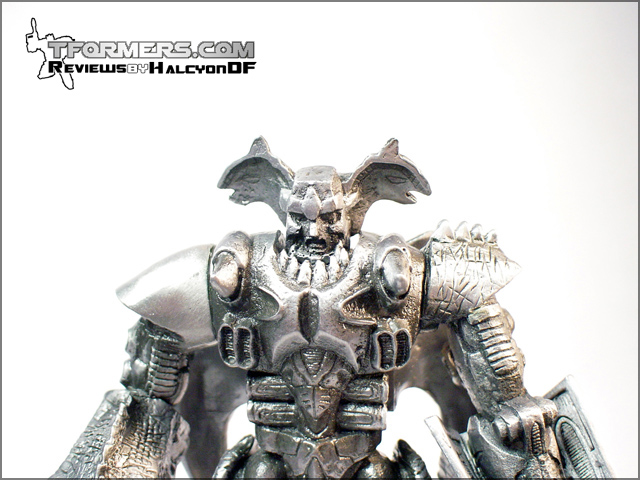 His normal head is nicely shaped with the center crest and the overall look of it is good. However, the face is rather poorly done. His mouth is open wide, that I can see, but his eyes are very fuzzy. They would have looked better if the eyes were moved more towards the surface, so as to not be hidden by the shadows. Also, Megatron has 2 “bat wings” sticking out of the sides of the heads. Those are actually 2 halves of his mutant masks, which are not movable. I would have to say that is a pretty bad decision. I would have liked this head to be without those additions and just the normal head like that of the show model which would have been great, since they are giving us the mutant head. 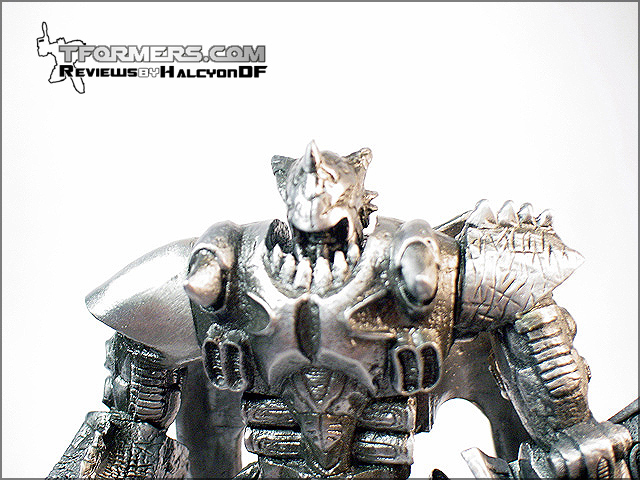 His mutant head looks out of place, in my opinion. This head actually made Megatron look like a good guy, while the mutant head made Convoy look like a bad guy. In the original toy, the mutant head is formed by folding the 2 “wings” down over the normal head. With a single horn in the center and 2 horns at the side, it seriously looks like something out of a ‘Digimon’ episode. Chances are this head will be kept in storage as I will be using the other head as the one on display.

I actually made the decision to buy this figure due to the texture and his right arm alone. And because I bought Megatron, I actually decided to buy the Convoy counterpart, which was an afterthought. If I had no knowledge of Beast Wars, and was shown this figure, I would think that it is great. But as a Beast Wars fan, I love the 2 Metal Monument figures and I find it sad that the demand for this item is very low. If u are a Beast Wars fans or love show-based memorabilia, you will not be disappointed.