Crumplezone has received an infusion of dark power from Galvatron and has thus become Dark Crumplezone. While he's beefed up a bit, he still seems to be just as emptyheaded as ever. However, this seems to be an upgrade done right as this is not only a redeco, but a retool as well.

Dark Crumplezone's revised alt mode almost makes this look like a whole new vehicle. There are several new additions to point out besides the obvious color changes. For one, there are now stabilizing wings on the front end. There are also twin laser cannons mounted on either side of the armored split window cockpit. Also, there are winglets on the front of each rear wheel. These wings are detachable and come in a seperate bag taped to the bottom of the box. Props to TFormers.com member Viscous for pointing that out. This is definitely a more serious Crumplezone. He now sports a cobalt blue paintjob with various orange decals and trimmings. There are also hints of burgandy.

Crumplezone sports a Speed Planet Key still, but it does have a new code. The Key works in the same way. Inserting it into the slot in the back brings the thrusters forward and makes out for 2 wicked cannons. I liked this Alt mode before, but the changes made for Dark Crumplezone are even better. Transformation is almost the same. The main difference to note is that his feet now slide out, then quarter moon out. 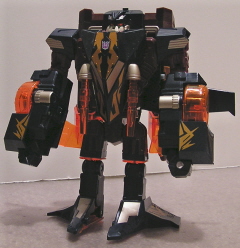 His robot mode looks just as dark as his new Alt mode. He looks identical besides the aforementioned body changes, although more burgandy shows up in robot mode. The stabilizer wings add stability to an already poseable and stable figure. The only gripe is that they limited movement to the elbow joints. He now has a permanent bend that can't be straightened. One other thing to note here. If you really miss the lime green paint job he had, just look at his face. You can see the green behind his mandible. The eyes are also orange piped. 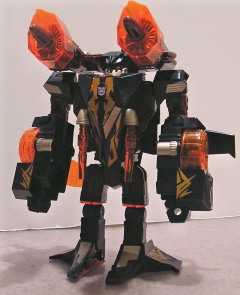 The Key function works the same in robot mode as well. There is alot to like about this retooling, and good reason to consider adding him into the collection, especially if you passed on Crumplezone the first time.