Scrapmetal marks the return of the Terrorcons. Originally a Gestalt group in the G1 days, the Terrorcons were reinvented as Unicron's assault force in Energon. Now, the Terrorcon name has been assigned to mutated Cybertron creatures with the task of destroying it. 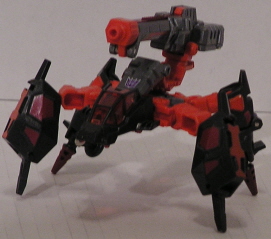 There's been alot of wondering as to what Scrapmetal is supposed to be in Alt mode. After reading the bio, it's pretty clear. Think overgrown mutant metallic cockroach. Scrapmetal is a metallic bug that was mutated by the black hole's power. What an interesting looking bug he is. He has 4 legs, one on each corner, complete with bending knees. There is a cockpit, but there is no detail inside. 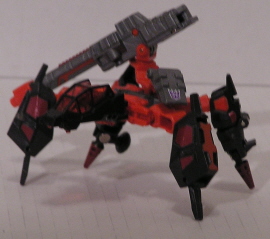 There is also a cannon mounted towards the rear. The cannon has limited vertical movement, but can freely move 360 horizontal degrees. So far, Scrapmetal is only released with an orange paint job. If any of the other colors are released remains to be seen. 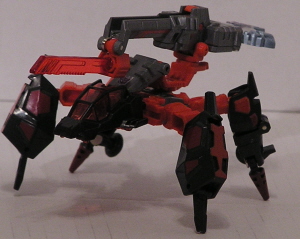 Inserting the Decepticon Cyber Key in the rear of the gun flips out an energon blade. How Scrapmetal was aligned with the Cons in the first place is anyone's guess. Anyways, the blade has a nice serration to it. Transforming him can be a bit of a trick as he basically works himself inside out to become a robot. Fitting all the limbs in their right spots can be a hair consuming. 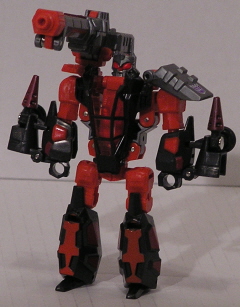 The robot mode translates very well. There is a bug eyed and empty look on his face, which is well enough since this is supposedly a stupid creature before being mutated. The cannon now sits on his right shoulder which gives him a little more credibility. He also has fists, but that can be changed. By flipping his legs back over his fists, then pointing the feet up 90 degrees, he can be outfitted with piledrivers. To add to this, he has great posing ability so you can pose him to shake things up a bit, a'la Rumble. 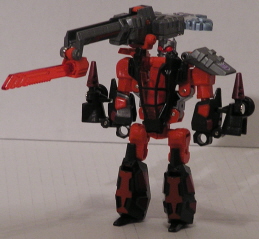 The Key function works the same here, giving him a little more edge. Overall, this is a nice Scout class figure. It's a pity they didn't name him Rumble or Frenzy instead of Scrapmetal. It would have made for a nice homage. 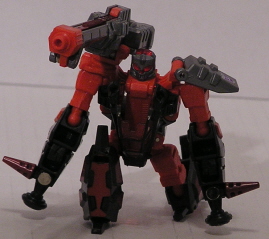