"...He’s worth a lot of money to me," is probably Boba Fett’s best quote. A character of few words and mostly nods was killed off in a rather slap stick manner not fitting a character of his presence. George Lucas says he died, other Star Wars writers say he survived but now our favorite bounty hunter has crossed into the Transformers universe. With one of the most unique ship designs it may prove one of the best. 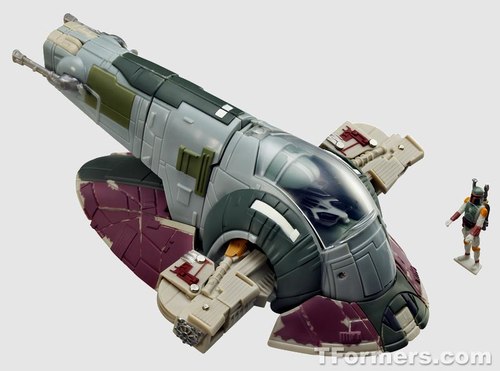 Slave One appears true to any other form I’ve ever owned. Cracked burgundy paint on a sand colored, half teardrop hull. Curved canopy that extends towards the narrowest part of the ships lower hull is grey with light and dark green accents. The canopy opens and you can put the miniature Boba pilot standing in the cockpit. There is nothing to hold him in place so he moves quite a bit. The two guns at the end (this ship is of such unique design it’s hard to label it’s parts but you know where I’m talking about anyway) rotate. The stabilizer fins also rotate and allow the ship to pitch and roll in the atmosphere. On the back of the hull you find two small gold circles that represent the propulsion system, and a larger circle at the top with a peg for the communications array. There is also a missile launcher that flips out and points a spring-loaded missile backwards, not really helpful in vehicle mode.

The vehicle mode is true to form… no robot surprises until you flip the wings down for flight mode and his hands become visible. The only flimsy part is the section of hull above the canopy, it gets folded in two places for it to fit into the chest for robot mode. The transformation is fairly straightforward with nothing to complicated. The pilot does have to be removed so the robot head can be rotated out but you had to open the canopy anyway. The arms may pop out also but they pop right back in. 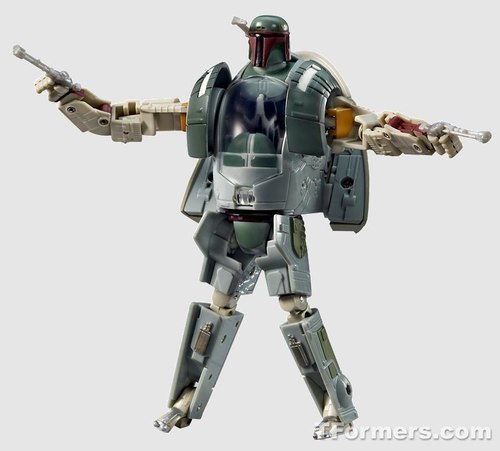 With the missile launcher sitting on his back Boba looks fairly true to form here as well. T-visored helmet with antennae on the right side, red and yellow patches on a primarily grey uniform of the Mandalorian soldier, the only thing missing are his insignias, no bantha skulls here, they were on the packaging though. The fins became arms, uniquely constructed also, with two possible elbows, the section of the main ship that had the guns is now legs, and the teardrop hull is now a backpack. The legs have knees that don’t quite bend 45 degrees, and the hips are in ball joints but limited in movement due to a flap that extends forward, left over from the excellent vehicle mode. Like I said, the arms tend to pop off, but they have lots of useful joints, shoulder rotates, two elbows (one is on a spring), and a wrist that also rotates. The shoulders are set a little low so they look out of proportion but they can be left slightly up if you skip a step in the transformation.

The worst part about this mode is how easily the arms pop off, they’re constructed “similarly” to the heal spurs of Energon Rodimus. The next is the hand itself, it just can’t hold the pistols properly… they stay loose if he can hold them at all. He can still pose in a number of dramatic ways.

This is a great figure. It has articulation and is true to character of both the ship and the man. If you get one figure from this line make it this one. There are a few weaknesses in it but not all Transformers can be Alternators. I’m sure later down the line we’ll get a Jango repaint but we might not. This figure is much better than the Luke Skywalker/X-Wing I also reviewed. I can’t wait for them to tackle a B-Wing.