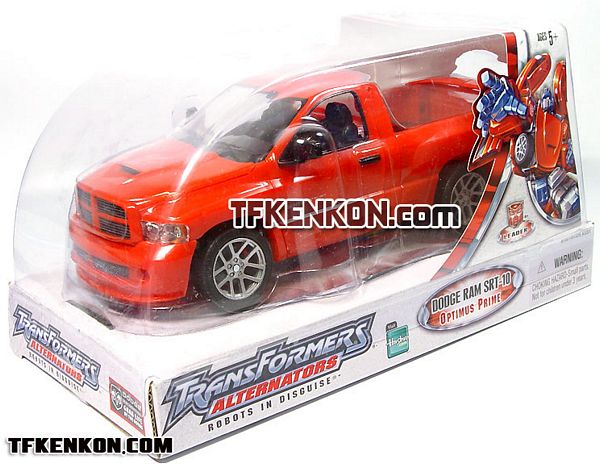 The defense of freedom requires the dedication of the mighty"

Perhaps no other character could be seen as the flagship of the Transformers line than Optimus Prime. His death in the 80's G1 cartoon was the beginning of the end for the line and since then there has always been a conscious effort on the part of Hasbro and Takara to have some kind of incarnation of Prime in a line. For awhile, it seemed that Alternators would go Primeless as the release of 20TH Anniversary Prime was in many fans eyes the perfect Alternators Prime. However, last year Hasbro showed the first pictures of the long rumored Dodge Ram Alternator. It was not Ironhide or Trailbreaker as many guessed but....Optimus Prime! Fans were shocked but not in a good way as the pictures showed a wreck of a figure. Questions instantly swirled across the fandom: Does he have knees? Is he properly transformed? Does he have a matrix? Some online pictures showed Prime somewhat better and proved he did have knees but even so, were fans right in thinking an Alt. Prime unnecessary? Take a read to find out...Also as everyone remembers my photography skills aren't exactly up to par so the pics come from Remy's excellent two part gallery series on Alternators Optimus Prime for the Vehicle Mode and the Robot Mode over at TFKenkon.com

Vehicle Mode
Alternators Optimus Prime breaks tradition slightly in that he is a Dodge Ram SRT-10 and for the first time in awhile is not hauling anything. That said, the vehicle mode is quite good, no suspension like Hound but the front wheels do turn in sync like most Alternators. A neat touch is the fact that the seats inside the Cab are fully rotatable! Also the rear trunk opens nicely

Transformation
Not the hardest Alt, but not the easiest either. The legs require little to no work as the only real work needed is the black and blue leg guards rotate and the feet are pulled out. Very sorry to report it, but the picture are all true: his legs DON'T extend :( The grunt of the work is in the upper body as the seats need to be rotated 180 degrees to free the arms and parts of the chasis need to be folded in. One thing to note, in the Hasbro picture there was a rather ugly crotch plate shown which covers the top part of his legs and the blue pelvis piece. I am happy to report that this step can be ignored. In fact, the crotch piece does not need to be unfolded at all! Prime looks alot better like that and going by the artwork and most retailer pics, Im suprised that the crotch piece is even on there

Robot Mode
Ill be honest: when I first finished Transforming him, I thought this figure is crap. In fact, I was tempted to go write a hate filled review trashing this figure but decided to wait a day or two to cool off. Well I cooled off but sadly the robot mode is still horrible! Whats wrong? Oh here's a few issues:

-Kibble restricts arm and sideways leg movement, especially the arms as the wheels on the body on one side and the car door on the other don't help
-The chest does not peg in (whether the crotch plate is deployed doesn't matter)
-The arms don't really peg in either and as a result his arms tend to lean backward
-His leg and knee joints are NOT clicking rachet joints. Real boneheaded move at he has the tendency to lean back
-Knees are high up so knee articulation is not as useful as it could have been
-The upper hood pieces look like an afterthought


Now this isn't to say there aren't some good qualities: the engine gun is very well designed and folds into a good sized blaster and doesn't look like a typical Alternators gun where the engine just has two barrels sticking out of it. The overall look really isn't that bad and does invoke Prime and the posability WOULD Have been good had the kibble not been so obstuctive.Among the articulation points are: 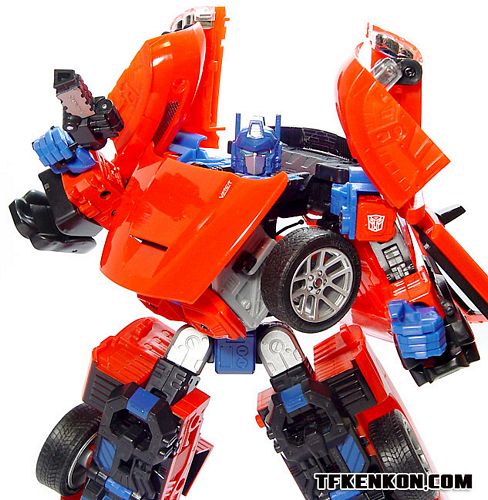 The arm problem mentioned can be retificied somewhat if the official transformation is not followed and the arm hinge piece is pointed forward instead of laid to the side. It also makes Prime look much sleeker and helps to get rid of the "hollow chest" look somewhat.

Verdict
This review probably comes across as hateful and negative. Well guilty as charged. This is the Alternators Optimus Prime, it should have been alot better than a floppy mess which this figure turned out to be. Perhaps this is why the figure did not get a Binaltech release as Takara may have realized this figure would not have been a good release.

If offically transformed its terrible. Ignore the crotchplate and fold in the arms and its definetly better, but still not a good figure. At the end of the day, had the legs been extended from the knees, clicking rachet joints been incorporated, the chest been able to be locked in this could have been a good figure. As is, it makes a good display piece but compared to recent Alternators such as Meister, Prowl, Grimlock (who through kibblelicious at least wasn't restricted and it looked good), Skids and Prowl (especially with the knee mod) its clearly a step down in quality. At the end of the day tho, its a Prime so I doubt one review is really going to convince anyone who likes the character or the figure from online pics not to buy. Just don't spend anymore than retail at the most and ignore the offical transformation and you'll be much happier 4.5-5/10