Perhaps one of the favorite characters of the G1 line was Soundwave. A coldhearted and monotoned lackey who could be caniving at will, he was a love him or hate him type of bot. Largely absent since then, he recently showed up as a Universe figure. Now, he makes a much anticipated return in the Cybertron line. Like Sideways, he is an agent from the Planet X sent to confuse both Autobots and Decepticons alike. The box features the storyline behind Planet X and is as follows:

"Planet X Does not exist. It is a code word linking the those who claim no world as their home, a secret society of evil robots whose shadowy goals are shrouded behind a web of deceit. No one knows how many Planet X agents there are in the universe, or who they are. All that is known is that wherever one of these vile robots goes, ruin soon follows.

They are the survivor of a civilization destroyed lon ago by the never-ending expansion of the Giant Planet. Consumed by their thirst for revenge, they struck a deal with Unicron, promising to serve him in exchange for the power to one day smash the Giant Planet. Since that day, the agents of Planet X have thrived on evil works. For millions of years, Soundwave and the others have searched the galaxy for the Planet Keys, their purpose far darker than even that of the Decepticons. They once hoped to give their master the edge he needed to finally destroy Cybertron once and for all, but now they seek nothing less than the resurrection of Unicron himself!" 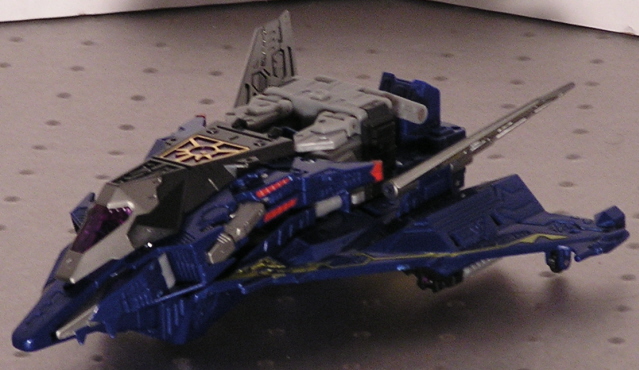 His Alt mode is a space jet. He is predominantly blue with some red, gold and black accents. As with Sideways, it's a very original looking and nicely detailed jet. However, unlike Sideways this mode suffers from some bad kibble, mainly on the roof section. You can clearly make out his legs and the hinge used to connect said legs to his torso in Robot mode. It really takes away from the whole design if looking at it from a top perspective. You can also clearly see his head on the belly of the ship. There are 3 spindled wheels molded to the belly for landing gear.

There are "engines" attached to either wing of the plane. Each engine is a weapons module. They attach (quite poorly) to the wings by tabs. It's a trick to get them to stay without dropping off. You can use the weapon modules either completely folded or with the barrels extended for an Alt Attack mode. It's a pretty good use for them. The Cyber Key opens a bomb hatch on the belly to release a bomb. Before I review the robot mode, let's look at these modules for a moment.

As mentioned earlier, there is a module on each wing and a bomb located in the ship's belly. They look like nothing more than hexagonal cylinders. However, they serve another purpose. Each wing module transforms into a weapon. These weapons can be attached to Soundwave in ways I shall explain in the Robot Mode review. The bomb module transforms into Soundwave's faithful drone, Laserbeak.

Laserbeak has some surprisingly good detail and posing ability due to his transformation. The wings can be posed several ways, and his head can bow down to a certain degree. He has a molded tailwing and 2 functional feet. This is definitely one of the nicer touches with Soundwave. Soundwave's transformation process is mostly similar to Sideways, except the legs come together with the torso by flipping 180 degrees and using a pegged lever to attach. 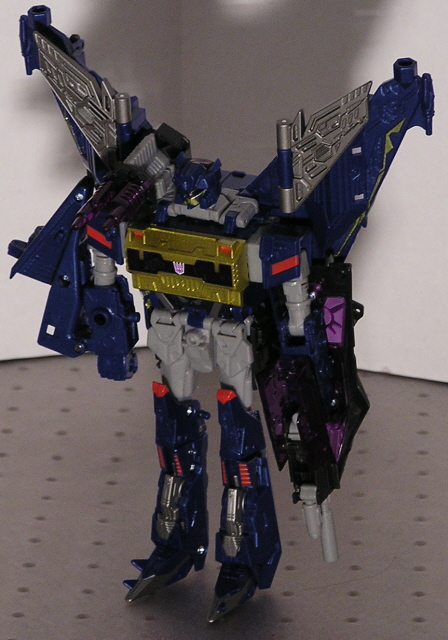 Soundwave's Robot mode for the most part is pretty impressive. He retains his mostly blue color scheme. There are some read and black accents as well, but what sticks out the most is his gold chest. He looks somewhat anorexic to me, but he does carry that same apocolyptic look that Sideways has so it's a good fit. As mentioned earlier, the weapons attach to Soundwave 2 different ways. You can either have him holding the weapons in each hand, or use the pegholder located on the rear of his right shoulder to attach one of the weapons to. Leg posing is pretty good, but due to the nosecone and cockpit being on each arm, it can limit arm poseability to a degree. This is a shame, as the joints are set up pretty good in the arms. The right arm especially is hampered in some posing. The head is very flexible and the purple piping for the eyes is very fitting. Laserbeak has a peg on his underside that allows him to 'perch' on the end of either of Soundwave's wings. However, his talons are flexible enough to even do an arm perch if so desired. 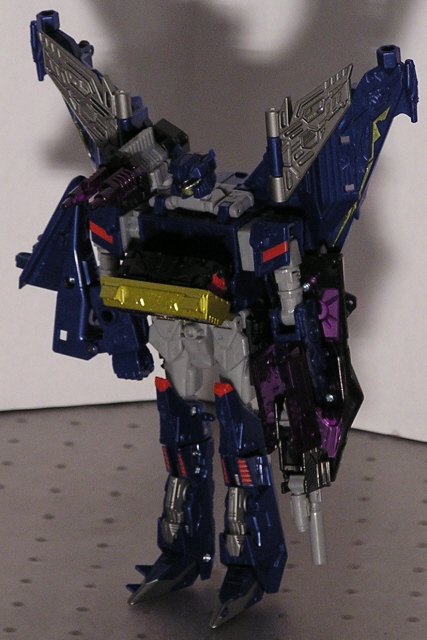 The Cyber Key mode works in the same way as in Alt mode. The chest opening is a nice homeage to G1, but I personally wish they would have found a better gimmick for the Cyber Key than simply opening the chest. It's a small gripe though, as there are enough gimmicks with this figure to easily justify the $20 retail price for him. In the end, this figure is definitely worth all the hype and anticipation is has received thus far. 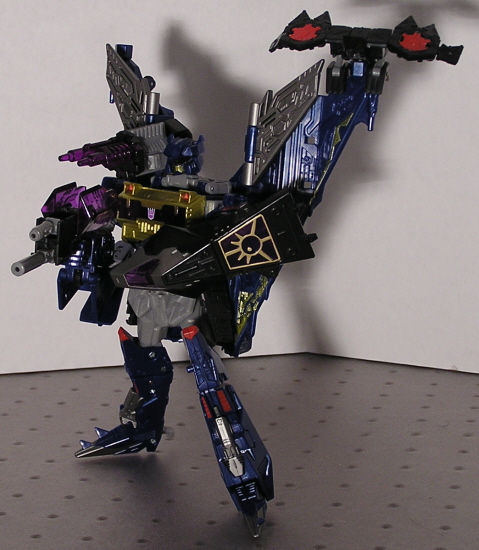