Cybertron Menasor! Moledive! I was shocked to find it in my local toy shop, and immediately picked the sucker up, plunked down the $30 and brought him home. I had picked up a Beast Wars 10th Anniversary Cheetor as well, and I opened him up first. I never bought Beast Wars before, and this was a surprisingly good figure, so I was in a good mood when I started to open Menasor. That was about to change...

At first I was excited to see there were only about six twist ties holding the big guy inside his package. It was easy enough to undo four of them and then slide him out. The minicon Heavyload has a twist tie that's attached to the plastic bubble, so you may need to tear the bubble off the cardboard in order to set him free. This may be the best method, as his front "scoop" fell off the moment I tried pulling him free without undoing the twist tie. An ominous sign, indeed. 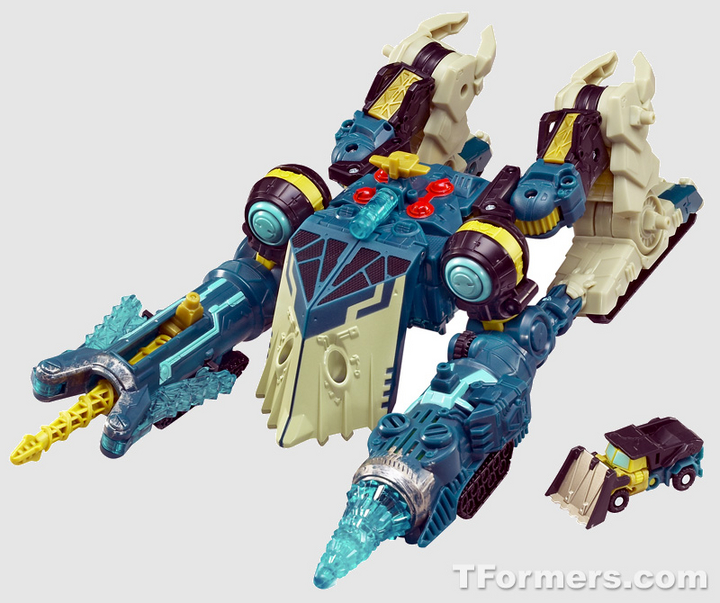 Well, is this really a vehicle? We all saw the cartoon, and saw the photos of this figure before it was released, so we knew what to expect from this mode. It's basically a robot laying on his stomach with his arms out to his sides. I'm not even sure if you could convince a small child that this is supposed to be a vehicle. Kids are smart. They know what vehicles look like: cars, trucks, planes, boats, robots laying on stomachs. Yeah. I wasted no time in busting out the instructions and transforming this big guy. I will, however, note that Menasor has about 6 minicon ports -- two on the front drill arms, and two on each of the... things that are not supposed to be instantly recognizable as his legs. Flip the vehicle over, and you can see Menasor's robot mode completely exposed.

As is to be expected, the transformation is obscenely simple. I used the instructions, but I'm not sure why. You don't need them. Maneuver two hip pieces downward and clamp them together, unfold the legs/feet, rotate the arms down, split the vehicle's front shell apart and fold it back, and -- you're done!

This is the reason I bought the figure. He just looks like a -- dare I say it?-- menacing robot. The first problem I noticed was noticable in vehicle mode, but even moreso during the transformation process -- Menasor's left leg was loose and wobbling from left to right. A simple enough problem to fix, as I just tightened the screw for that joint a bit and the problem was solved. Unfortunately, the same leg was also loose and wobbling from front to back -- and there is no way of fixing that unless I want to take the guy apart. I shouldn't have to do that. I figured it's only a loose leg, though, so let's be forgiving...

The forgiveness lasted all of about 10 seconds, until I realised the clasp that holds the two hip halves together does not work. I tried "manipulating" (can't believe I'm using the same word as Spielberg did) the joints to make everything fit in a more snug fashion, but nothing worked. Any attempt to move a leg outward for posing will result in the hips splitting apart, with almost zero resistance. This causes the (or at least, MY) figure to be unable to hold many poses without shifting or falling down completely. Even standing poses are difficult. Wah! It's a dud! 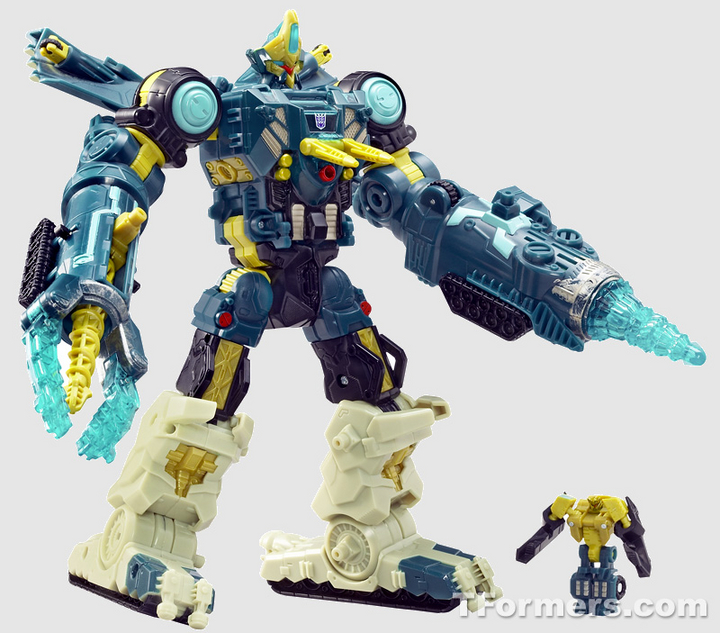 Menasor's arms look the same as they do in vehicle mode. A drill arm and a.... claw-drill arm. I can't say it makes much sense, but it looks very cool in robot mode. This is where the features come into play. Take your Heavyload minicon and attach him to the minicon port on Menasor's right arm, then slide him downward towards where the "hand" would be. The center drill extends, and two claw-like appendages swing forward to act as... fingers, I would assume. This is a little odd, as if the guy were real and trying to drill something, these appendages would probably just get in the way. Oh well. Maybe I just don't understand the intricacies of contruction on Gigalonia (or the Giant Planet, for you Cybetron cartoon fans).

Two AA batteries need to be inserted into Menasor's left arm, as this is where the special lights and sounds come into effect. Once you're done, insert Menasor's purple Giant Planet force chip planet key thing into the appropriate slot. The transparent drill tip will light up red (you know, those red LED light are completely inexpensive, and I feel we're getting ripped off when Hasbro uses them. More on that later). So yeah, the drill tip light up red, and we get a loud...noise..... of something crashing... It's supposed to be a drilling sound, I'm sure, but it just sounds like a box of glassware bring run over by an airplane. Here, let me try it again.... Yeah, it's just a terrible sound.

On the same arm, the box states that rolling the vehicle mode will cause the drill to spin and activate lights and sounds. Well, this isn't really true. There are two wheels on either side of said arm (one small on the bottom, and one larger, toothed wheel on the top) which will cause the drill to spin when turned manually. On any smooth surface, it seems impossible to make the wheels turn. Lights and sounds are not activated until the Planet Key is inserted. Nothing happens before or after.

Ok, I can't hold back any longer. I just have to have a mini bittergasm here about Transformers toys and "Special Electronic Lights & Sounds!" When I hold Menasor, yes, he's a big figure. Definitely fits that Ultra size class. What does NOT fit is the price. Sure, you think -- big box, big price, but are you really getting your money's worth? Even if this figure were not utterly defective, I would feel ripped off paying $30 and getting merely this. The plastic is sturdy enough, but is light and the figure itself feels jiggly and fragile. I'm sure on the massive scale these things were produced, a single Menasor probably only costs $5 or less to produce, yet we pay six times that much for it. Why is that? Habsro tells us that the electronic lights and sounds are such an amazing feature, we have to jack the price up to astronomical levels. As I mentioned above, the LED lights that are used in Transformers figures are insanely inexpensive, so setting one of those up to blink for 5 seconds is not a big deal. The sound effects? As I just mentioned, the sounds are not all they're cracked up to be. They're fuzzy, harsh, and just not impressive. I bought a $15 M.A.R.S. talking/walking robot at Walmart that has absolutely amazing sounds. Tons of them. This guy is easily twice the size of Menasor, three times the weight, he has multiple LEDs, a light-up, spinning chest piece, and the guy walks, turns his head and waist, talks, has removable armor, and has extra scanning and firing sounds. This is all for $15, which is half of what I paid for Menasor. Ok, I can take a photo of this guy for comparison. Sure, he doesn't transform, but he's a giant robot. My point is -- Hasbro is charging top-dollar for items that are sub-standard. When my Beast Wars Cheetor figure is better than my $30 Menasor, something is wrong -- and a wimpy blinking red light and sound effect are not going to make me think I got my money's worth... especially when I'M expected to supply the batteries!

As far as minicons go, this guy isn't too bad. He's in that middle range, as far as transformation and appearance go. The guy is a bulldozer/dumptruck in vehicle mode. Swing the legs and hips down (mine jiggled much after that step) split the dumpster portion apart to form arms, and flip his very tiny robot head forward. The head is nice, actually. The rest of the figure is eh. The one semi-cool thing about this minicon is the .... well, it's really not that cool. Heavyload powerlinks with Menasor in Vehicle mode. Split Menasor's front shell apart. Each half features a small divit into which Heavyload can be plugged, What this gives you is Menasor with a tiny scoop in his front center, and an awkward gap just above that -- so, practically speaking, if this guy were to shovel any dirt with this feature, it would end up being dumped onto his "hidden" robot head.

I can't recommend this figure to anyone. Of course if you're a completist, and you like the robot mode enough, you'll buy him. I just want to warn people that -- defective or not -- this figure is probably going to make you think twice about spending $30 on Ultra figures in the future. No matter how cool a sculpt a figure has, if the basic *feel* of the figure is off, it's a major disappointment. The vehicle mode is useless, and I believe it was merely designed after someone approved the robot mode concept. I really wanted to like this guy, but... I just can't. I think the best thing about this figure is the novelty of getting my first Giant Planet Cyber Planet Key (no, of course I didn't repackage Menasor keeping the key for myself. Buahahaha).

This morning I called Hasbro and ordered a shipping label to return the figure to them. We'll see what I get back, as they told me they can't guarantee another of the same figure. I suppose if I get a Wing Saber or Sky Shadow, that might be an improvement.