Metroplex was a towering mass of Autobot back in the G1 era. The 2nd of the MegaFormers (preceded by Omega Supreme), Metroplex was larger than even the combined Gestalts and had the price to match. Eventually, even Metroplex was outsized by FortMax and Scorponok. He then went into retirement until now. For the Cybertron universe, Metroplex is the leader of the lost planet of Gigantian. 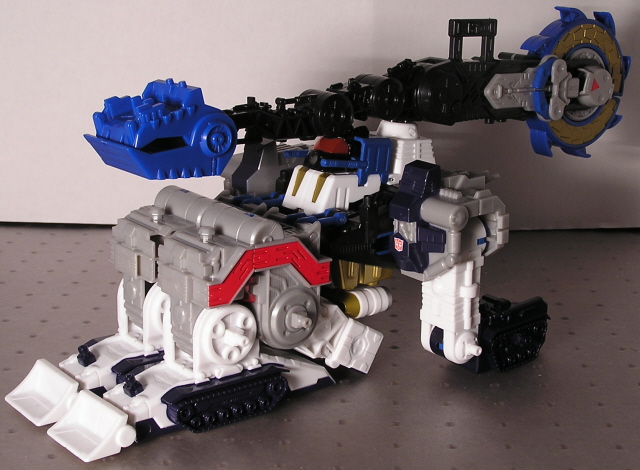 His alt form resembles a somewhat awkward mining vehicle. He is predominantly white, which is in itself odd for a construction vehicle. He also has various colors throughout, including blue, gold, red and gray. He does have some pretty nice detail thoughout, including the track treads that provide his momentum (although in this case there are 6 rollers to provide movement, the tracks are just for show) and various struts/gears. There is a cockpit that does have a laser turret mounted on either side towards the top of the machine. There is also his attachment, named Sparkdrinker, which acts as his main gimmick for his Alt mode. 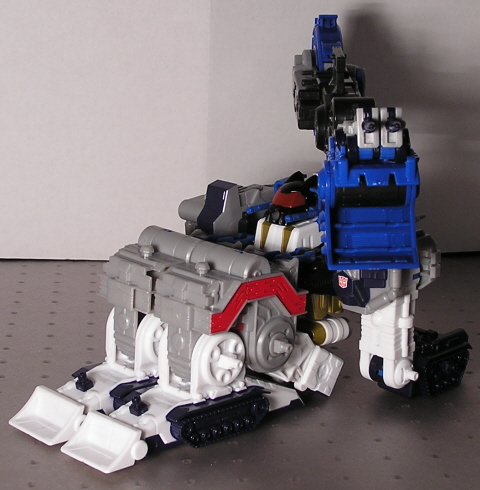 Sparkdrinker is comprised of 2 ends. On one end is a circular saw, which can spin on a ratcheting spindle. However, you have to spin the wheel manually, there is no crank or 'push' action. On the other end is a shovel, which can manually open and close. Metroplex comes with his own minicon named Drillbit (more later) which can attach to the shovel in Alt mode and provide a twin drill attachment. Sparkdrinker itself attaches to a rotateable turret which can spin 360 degrees. It can mount in either of 2 positions, depending on which end you want to use. 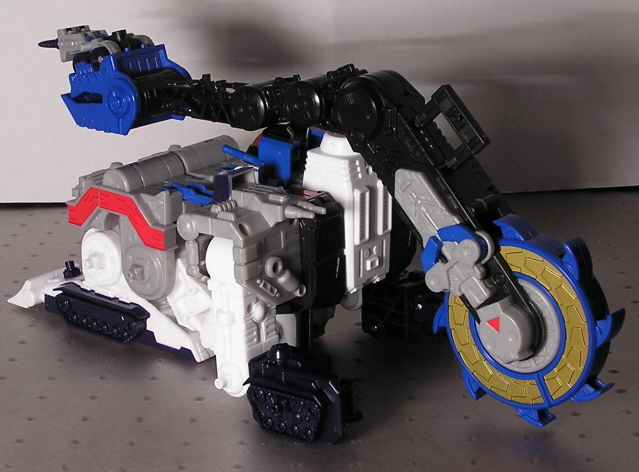 There are also 3 seperate joints on Sparkdrinker which allows you to do numerous bends and poses for Metroplex's alt mode. This really adds good value to the alt mode and slightly makes up for the awkward aesthetics. 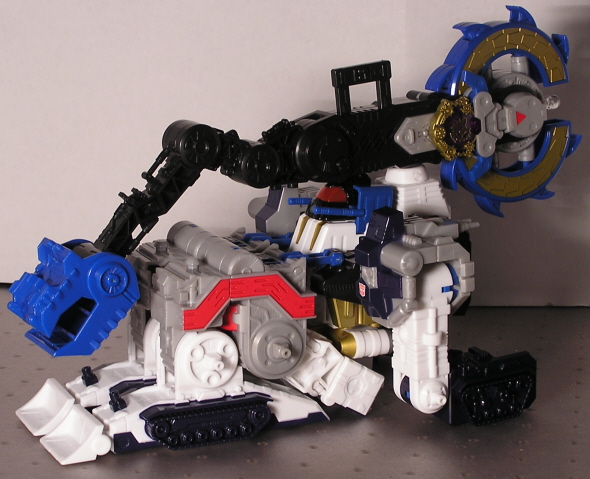 Metroplex's Cyber Planet key is gold like other leaders. The Gigantian key itself is nicely details, surrounded by gears. Even the Gigantian symbol is a series of cogs. The Key inserts into Sparkdrinker on the Saw end. To insert the key, you have to align the arrow on the saw to point away from the main rod. You then push a gray sliding piece into the slot on the spindle of the saw, expanding 2 winglets. This, by the way, will immobilize the saw. You can then insert the Key. It's a very lackluster function. It basically splits the saw in 2 and exposes a hidden laser turret. If you have the 2 AAA batteries installed, you will also get a light show from the turret and a halfway decent sound. Save your batteries. His transformation is not as simple as one might be led to believe, but it's still fairly easy to execute. Before heading to Metroplex's robot mode, let's look at Drillbit. 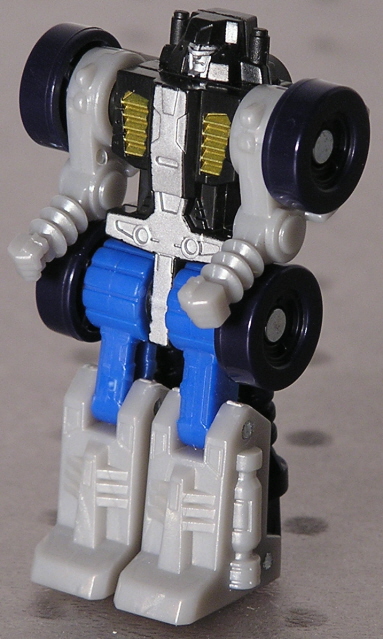 Drillbit is Metroplex's minicon. All Gigantian residents are paired with one. There is thought out there that Drillbit is a retooling of Armada Megatron's minicon, Leader-1. This isn't true. The only similarities between the 2 minicons is the cockpit design in Alt mode, the arms and the basic transformation. However, I can assure you that Drillbit is an entirely new mold. His alt mode is a twin-drill machine. There is a surprising amount of detail to Drillbit in Robot mode. He is mostly gray and dark blue with some light blue and gold accents. As well as being able to combine with Sparkdrinker's shovel in Alt mode, Drillbit can also form a weapon for Metroplex in Robot mode. With that, let's shift back to Metroplex. 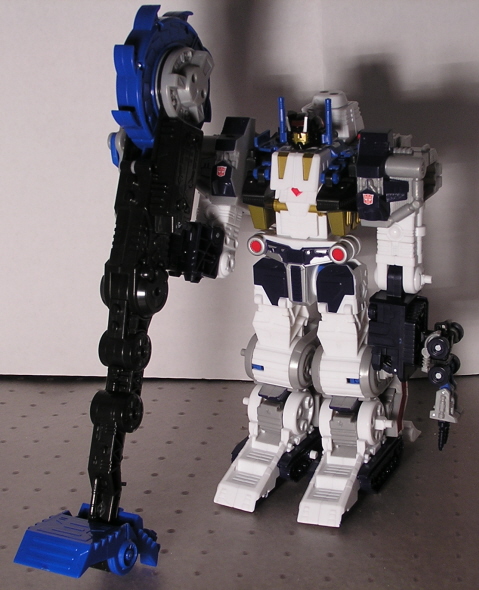 There is a backwards perception of Metroplex that I will attempt to correct here. The pics above are Metroplex's normal robot mode. Most articles I have seen refer to this as a Brute mode. According to the directions and box literature, there is no "Brute" mode. There is another mode I will touch on later, however. Metroplex is very stocky looking and looks armored to the hilt. As mentioned, thanks to 14 minicon ports (4 on the arms, 4 on his chest, 2 on the back of his feet and 4 on the lower legs), Drillbit can attach and use his twin drills as a weapon for Metroplex. Of course, there is also Sparkdrinker, which Metroplex can hold in his hand. The handle on Sparkdrinker is pegged, but due to the weight the peg almost never holds. Therefore, it can be hard for Metroplex to keep a good grip on it. The poseability is quite good in this mode. The only suffering it has is in the legs, which are quite limited. That is... until you convert Metroplex to Combat mode. The process is quite simple. It comprises of repositioning the lower legs to expand and flipping the chest over 90 degrees. 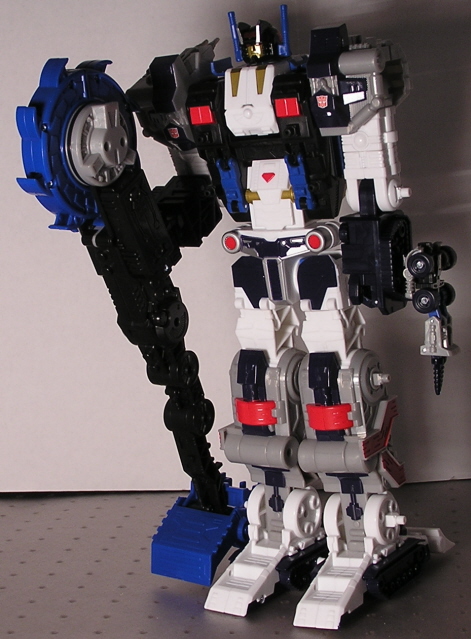 Personally, this is where Metroplex really shines. In Combat mode, he stands almost 13-1/2" tall, shadowed only by Supreme Starscream. He loses some of his stockiness, but he gains not only stature but poseability. The Combat mode allows the legs to have MUCH more joint movement. I should also mention that ALL the joints are ratcheting, so they keep their pose quite well. There is one main weakness in both robot modes. His head is on a flap that isn't secured at all, so it can flop around sometimes. Besides that one bad point, this is a great robot. 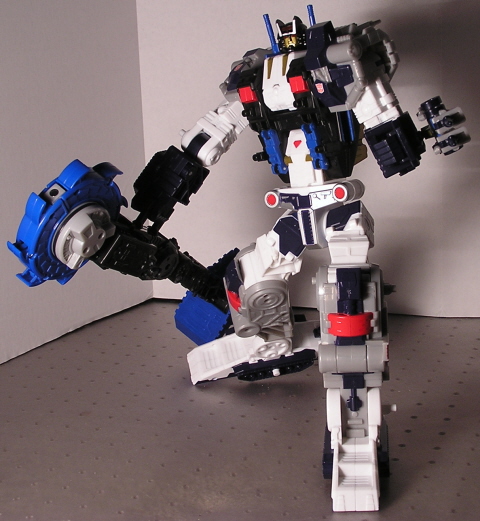 One other note: Sparkdrinker can be weilded by Optimus Prime, as shown in the Anime. The peg on the handle also fits Prime's hand. However, be aware that the same weak peg and weight issues will also plague Prime's ability to weild Sparkdrinker properly, albeit more so. Overall, Metroplex has a ton of features built in and comes with his own Minicon. If you can overlook the crazy Alt mode, this is definitely one bot to own. 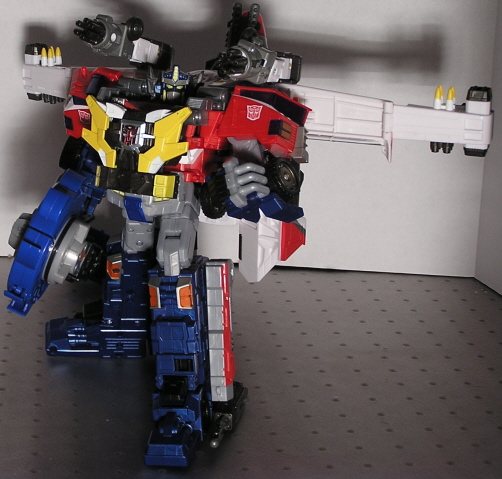