One thing that has been missing from the Cybertron series are gestalts, or combiners. They made a big return in Energon, and I think almost everyone was hoping the trend would continue in Cybertron. Alas, it did not. However, they have taken a classic G1 gestalt name and applied it to a new mold. Menasor is the 2nd offering from Gigantian, labeled as a jealous rebel who teams up with Galvatron to overthrow Metroplex. 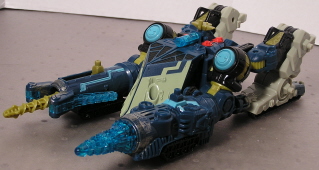 Menasor is an armored drilling machine. On either side of the armored shovel is a drill. On the left, he has a photonic disruptor drill. There is a thumbwheel on the bottom which, when Menasor is rolled on the ground, will cause this drill to spin. The wheel actually works very well in doing it's purpose, unlike past attempts to cause rolling action with previous figures. On the right is a wrecker drill. This drill remains stationairy when the vehicle is rolled, but does serve a purpose later on. The colors are pretty strange. He's predominantly turquoise and light grey, which to me doesn't go terribly well together... especially on a construction vehicle. Att to that shades of mustard yellow, red and black and you have a combonation that doesn't come off terribly well. Of course, there are worse color schemes out there. Finally, regarding the vehicle mode itself, it's nothing more than a big batch of kibble. There are nice touches, such as the roof mounted cannon and 6 minicon ports, but the Alt mode strikes one as an afterthought.

Speaking of which, the Cyber Key mode also will strike you as an afterthought. Insert the key in the left side (which is the only port by the way) and you get lights and sounds, provided you fed 2xAAA into the battery case... which I didn't. It's sad when HasTak decides to make the main gimmick nothing more than a light show. There is some minor redemption. If you insert his minicon, Heavy Load, into his right front minicon port and slide it forward, a pair of claws swing forward and the wrecker drill spins a bit. If you take Heavy Load out of the port afterwards, the claw stays in place. You can also split the shovel and insert Heavy Load into the shovel to create a Powerlinx mode. However, I honestly wouldn't fret with it, as Heavy Load can never seat in the shovel quite right. Speaking of which, let's talk about Heavy Load for a moment. 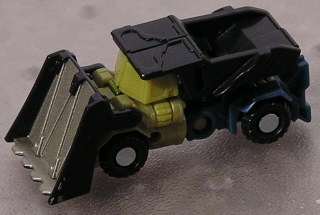 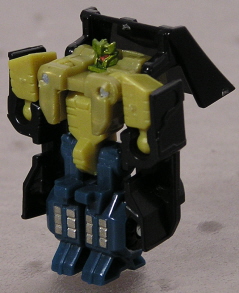 One of the main draws to the Gigantian figures is that they come with a new minicon. Menasor is packaged with Heavy Load. His Alt mode is an armored dump truck. Like Menasor, he has the armored shovel on the front end. He features the same color scheme as Menasor, albeit more black and mustard yellow showing. His robot mode is pretty nice as well, although why they gave him a green head is beyond me. Although he has no knees, he does have elbows and his arms work very well. Overall, a very nice minicon. Menasor's transformation process is disappointingly simple. The figure should be rated for 3 and above... that's how simple it is. 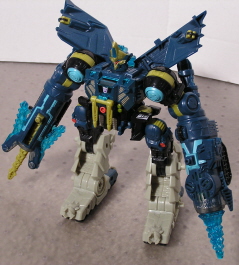 Like Metroplex, Menasor has two robot modes. The first shown is his Work mode (or Brute mode if you prefer). The work mode is basically half his robot mode transformation. It's quite silly looking, actually. 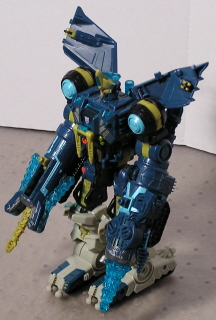 By finishing the other half of his transformation, you get his Combat mode. The color scheme basically stays the same, but more yellow shows. It's not too bad looking of a robot mode. He has a twin laser on his chest that can fold out 90degrees to face forward. His face in particular is pretty cool looking and features blue light piping. The figure is a sturdy poser with real good poseability. There are multiple joints which will allow you alot of different stances. Your only limitations are in 2 places. One, the minicon ports that were on the rear of his Alt mode now sit on the inside of his calves. Therefore, the legs are never fully flat against each other. Two, the arms have a permanent bend to them. This is because of the overhang used to join the arms and legs to create the treads in Alt mode. 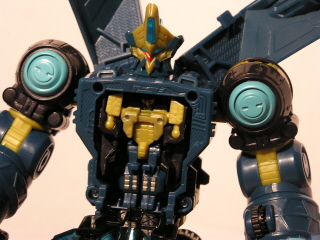 Menasor's chest opens up to reveal a stoarge compartment for Heavy Load. Heavy Load must be in Robot mode for the storage to work. A good use for empty space, I suppose. 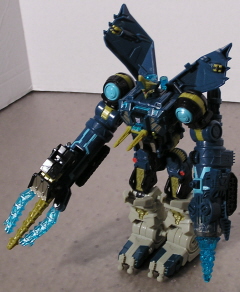 The Cyber Key works the same in Robot mode. That is to say, there are no real features to speak of besides the light show. Fortunately, the minicon activated feature still works well in robot mode. It doesn't seem that alot of time went into creating this figure. To be honest, I don't see much value in having Menasor in your collection unless you're a completist. 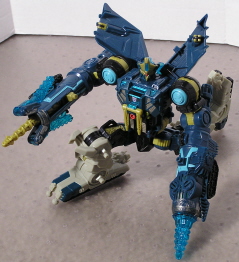